China’s government or the PBOC moved to suspend three foreign banks from participating in cross-border currency transactions. From what I have seen, and nothing has been confirmed, rumors have suggested that Deutsche Bank was one of the three. The move has, as usual, created all manner of confusion in how to frame what the PBOC or Chinese regulators might be attempting. Recall that August’s great “devaluation” was supposed to be exactly that, an intentional “stimulus” of sorts to devalue CNY against the dollar to regain export expansion.

Since then, the PBOC’s various moves, of which there have been many, don’t seem to align with devaluation tactics. The suspension of banks in the “carry trade” between onshore and offshore CNY and CNH is yet another example.

By closing loopholes in its regulations, China is trying to stabilize the yuan after a surprising revamp of its currency-valuation system in August led to capital outflows and prompted policy makers to tap $213 billion of foreign reserves to support the yuan. The risk is that discouraging arbitrage will cause the exchange rates to diverge further, undermining the goal of unifying the two markets.

From devaluation to now “stabilizing the yuan”, the PBOC has caught currency observers in competing narratives. Here’s another:

The spread between the onshore and offshore markets for the yuan, or renminbi, has been growing since the devaluation, making it increasingly difficult for the central bank to manage its currency and stem an outflow of capital from an economy that is facing its slowest growth in 25 years.

The sources told Reuters that authorities had warned the banks that if they engaged in lucrative carry trade, taking advantage of the different exchange rates, the central bank would move to further block arbitrage channels.

“This is part of the PBOC’s expedient means to stabilize the yuan’s exchange rate,” said an executive at a foreign bank contacted separately.

Assuming that stability is the goal now, left unanswered is “why.” Devaluation needs no overt explanation as it is obvious, but in the context of China’s slowing growth and supposed need for “stimulus” stabilization of the currency doesn’t lead to obvious reasoning – especially in orthodox terms that expects currency to be moving and unstable, if at least in the contours of central bank manipulation. The closest we get to an answer on that count is “capital outflow”, but in the context of China’s economy a stable exchange isn’t going to make any difference.

However, if we view the PBOC’s discretions inside the context of wholesale financial operation, stability makes perfect sense and it always has; look at what the PBOC was doing in the five months immediately before August 10: 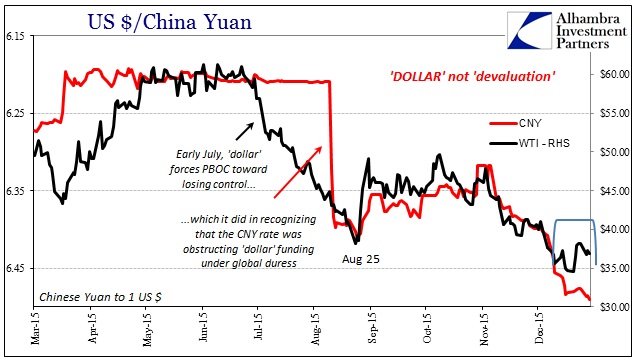 Currency “speculators”, whether or not that is what they are doesn’t matter, driving down the price of CNH on open exchange has the very real function of making the “dollar short” that much more difficult and expensive; thus, the PBOC, on behalf of both onshore and offshore Chinese banks, has a great interest in seeing at last a stable exchange to facilitate as best as possible continued “dollar” financing, including its own internal funding mechanisms.

The arb between onshore and offshore RMB has the effect of moving “dollar” transactions to Hong Kong and away from onshore China; a “speculator” might “buy” CNH in Hong Kong and then “sell” in CNY in Shanghai, all using “dollars” as the funding mechanism. It displaces dollar activity and volume that is obviously needed and necessary onshore where the PBOC clearly believes it has legitimate interests. In other words, this is not the center of China’s “dollar” problem so much as it makes it that much more difficult and unsteady.

The central bank has great interest in keeping CNY as stable as possible, if not appreciating, due not to “capital outflows” but how that interpretation masks funding irregularity and acute disorder in “dollars.” You have to wonder how much the PBOC might blame this mechanism for the last fit of “devaluation” starting in November. Recall then, after the rate cut and reserve requirement reduction in late October, the reference rate was moved up only to trigger a violent counter-response in HIBOR, or CNH liquidity. It is possible that the PBOC has assessed that difficulty as relating to the onshore/offshore “carry trade” and now, after seeing the exchange rate drop steadily for two months, is taking steps to remove or diminish the impediment as a wholesale matter rather than “capital outflows.”

Devaluation was never the goal, only the symptom of what the PBOC could not accomplish; though not for lack of trying. What is clear, however, is that they are still trying which can only mean that they still have something to “fix.” This goes along with both potential irregularity in US money markets as well as the sudden interest in more “flexibility” on multiple policy fronts (subscription required on both). Unfortunately for China, that list is long but the fact that they keep focus and attention on dollar/CNY/CNH gives us insight into what they prioritize among the worrisome imbalances and deficiencies on it. 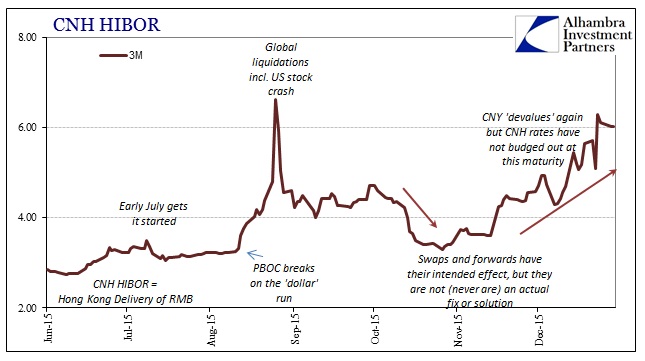 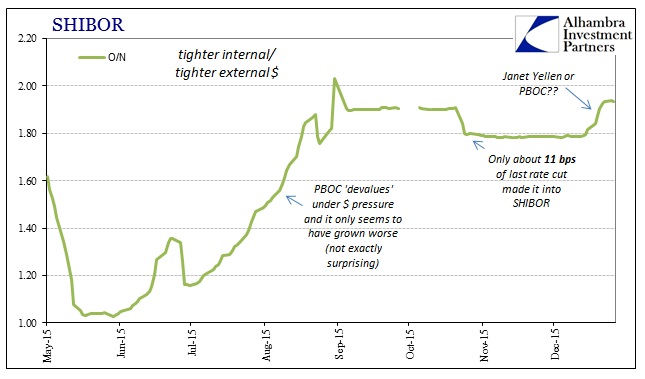