China Has Been Entirely Predictable

China Has Been Entirely Predictable

The Chinese currency is once more on top of the news heap, with everyone trying to figure out what is going on. At first, “devaluation” was almost welcomed back in August when it was viewed as some kind of belated PBOC indirect “stimulus.” Very quickly, however, that view was softened as the currency direction appeared very much related to financial turmoil; and not just in China. That point confounded convention and would continue to haunt the mainstream commentary especially as the PBOC further seemed to be trying to get CNY to move upward rather than downward. In fact, the very hint that a grand central bank would be fighting with such desperation was antithetical to everything that economics believes.

I fully recognize the conceit in proclaiming that the rest of the world has got it all wrong (it’s far easier to proclaim that of just economists). In that respect, whatever comes out of China in 2016, the silver lining (potentially) will be to demonstrate that effect. A much more potent tragic benefit would be if that awakening is further extended to the entire global financial system, which was my most fervent hope after the events in 2008 (misreading the world’s desire to just get back to the “way it was” with the least amount of disruption).

The commentary surrounding Chinese instability is mistaken first by thinking it purely Chinese. That comes about because the frame of reference is all wrong.

Stocks fell around the world and commodities slid after China’s central bank set the yuan’s reference rate at an unexpectedly weak level, a reminder of the shock depreciation in August that sparked a wave of financial-market turmoil.

Emerging-market stocks dropped to a six-year low and developing-nation currencies declined versus the dollar, while shares in Europe resumed losses after closing higher on Tuesday.

It was only unexpected if you thought what happened in August was discrete and temporary. Unfortunately, starting with economists, that is all that has been declared in China these past few months.

“China is for sure back in focus,” said Didier Duret, chief investment officer at ABN Amro NV’s wealth-management unit. “I’d say this is an echo of what happened in August maybe more than a replay. It’s making people nervous.”

China is not “back in focus” because it never really was the focus. It’s neither an echo nor a replay. It is the same thing only transformed in maturity by what the PBOC had been doing in the late stages of its last great intervention. Nothing was fixed; there were no solutions presented. In other words, the deployment of swaps and forwards simply moved the acute part of the then turmoil some distance into the future. It is now the future.

“Everyone has been taken by surprise by the scale of the volatility this week. It’s all driven by China,” said Gian Marco Salcioli, head of FX sales at Italy’s Intesa Sanpaolo Banca IMI.

“The question is how much of its reserves China is willing to put on the line (to defend the yuan).”

And that is the second grand mistake in the conventional view on global money. Economists still somehow think the dollar replaced gold after Bretton Woods fell apart all throughout the 1960’s (Nixon in August 1971 was really just the official declaration of practical fact that had been in place for some years before; maybe even a decade or more). It wasn’t the dollar that replaced gold exchange, it was the eurodollar. The difference between the two is enormous not just in terms of practical applications but beyond that in pure philosophical implications in how we should understand it all.

Orthodox convention assigns the dollar as global reserve as if there were piles of physical Federal Reserve Notes underpinning at least the basics of the global system, augmented greatly by correspondent accounts (deposit balances) that are called “reserves” so long as they are applied via certain regulations. The eurodollar, on the other hand, is an entirely different paradigm as a credit-based currency; a conjunction of words in a specific arrangement that reflects the fact that the term “currency” barely applies since what is operative about the system is in many ways nothing like currency at all even if it does follow the same characteristics and patterns. In the end, credit-based currency may be fairly called that only because it fills the same need; the great problem in understanding is realizing that how it does so is entirely different.

In specific terms of China in the latter months of 2015 and the first week of 2016, the PBOC has already put its “reserves” “on the line (to defend the yuan)” over and over and over again. It just hasn’t done so in the way that reflects upon the 1950’s view of the global currency exchange. Instead, the PBOC has undoubtedly been highly active in deploying wholesale functions – which is entirely the problem. It is the great trap from which they cannot escape, and, in fact, it can only get worse the more they struggle. Using forwards and swaps inside a “dollar” run is only digging a deeper grave in which you’ll be placed into that much sooner. 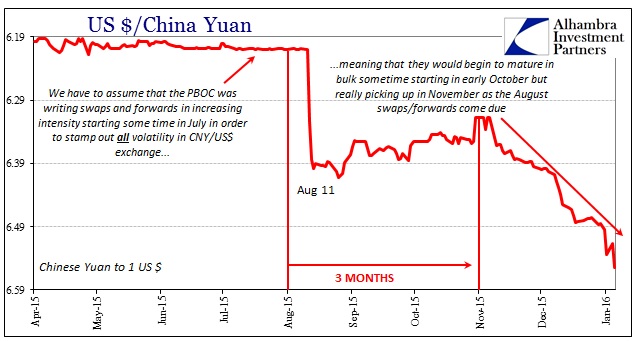 I first suggested this as the nightmare scenario back on September 1, and increasingly that looks to have been a sound bit of sensationalizing. Indeed, the further we go the less sensational it appears, becoming much more just the start. On July 22, I wrote of China and its CNY:

Trading has been confined, except for very brief, intraday outbursts, to an increasingly narrow range. Given its behavior particularly as a full part of the reform agenda to that point, this amounts to what can only be hidden and inorganic factors. Whether that means PBOC intervention is unclear, though suggested by even TIC, but this is the most important and unexplained dynamic in the “dollar” world at present.

This is not devaluation, a fact that should be apparent by the massive financial turmoil that has come about from only about a 5% move in CNY! Maybe now that the nightmare has become not the Chinese baseline but really the global dollar baseline, the true worst case, the global nightmare, is something like Brazil and the real. Unfortunately, that potential is not a trivial probability.

What is truly alarming, if not downright frightening, is that the eurodollar as reserve currency makes it nearly impossible (and I use “nearly” just to note that there are factors yet undiscovered in wholesale finance; a convention that could be a greater nightmare but also a ray of hope) to determine an end. It is a world where nobody has dollars but everybody simultaneously claims to, so that when functional “currency” (credit-based) is hard to gather in order to conduct actual trade and commerce the damage isn’t limited to some economic opportunity cost.  Instead, all that feeds into further erosion (volatility and risk calculations) in “dollar” availability (in geometric progression; slow at first, then all at once).

The reason for all this confusion is relatively simple. Once your frame of reference is torn out of inappropriate deference to economists who somehow believe banking and money would stop evolving during the same period in which technology reshaped literally everything in the world around us, these transformations can be more fully appreciated. There was much more weight and reference in what I wrote yesterday, both here and here (subscription required), which turns what was unexpected into very much expected.