The Cloud of Wholesale Autos

The Cloud of Wholesale Autos

Lost amidst the celebrations about the new auto sales record achieved in 2015 was that sales in December were more than disappointing. There were an overwhelming number of articles on the subject, and nearly all of them identical in focusing almost exclusively on 2015 as a whole rather than how sales were at the end. It is entirely understandable, not just because of the record but because autos have been one of the only actual bright spots in the economy (forgetting how it has been made so by pure credit debasement).

Whatever the displeasure in December, nobody seems to expect that to be much more than a minor blip.

“Missing one month for the domestic consensus isn’t a big deal,” said Jessica Caldwell, an analyst with automotive pricing website Edmunds.com, in a telephone interview. “It doesn’t take away from the larger picture of just how strong auto sales were in December and, really, all of 2015 — and how they’re set up to continue in 2016.”

Maybe, but the scale of the miss was at least cause for making sure. For a year in which sales were strong but perhaps more inconsistent than they had been in past years, ending on such a sour note was at least enough to suggest a harder look.

Automakers on Tuesday set a new U.S. sales record for 2015 even as December sales fell short of expectations, and most forecasters said sales should rise to another record this year…

There is a big difference between 18.1 million and 17.34, though it is difficult to figure out the actual scale of that difference. There were a high degree of seasonal components that went into the 17.34 million owing to the calendar changes between November and December 2014 and November and December 2015 (which ones have five weekends and more selling days vs. which that don’t). Whatever was ultimately sold in actuality of US autos in December, however, likely wasn’t enough to even start to undo what is building in wholesale inventory.

As noted for October, auto inventory levels at the wholesale tier of the supply chain were extreme. They got even more so in November, meaning disappointing in December is not some potential forgettable setback as there are very real production levels at stake in the opening period of 2016. Automakers count sales off the factory floor no matter where they go, but the more they end up sitting in wholesale (channel stuffing) the more that sales from the factory will have to slow in the future. From there, minor adjustments (longer furloughs and hiring freezes) become active cuts. 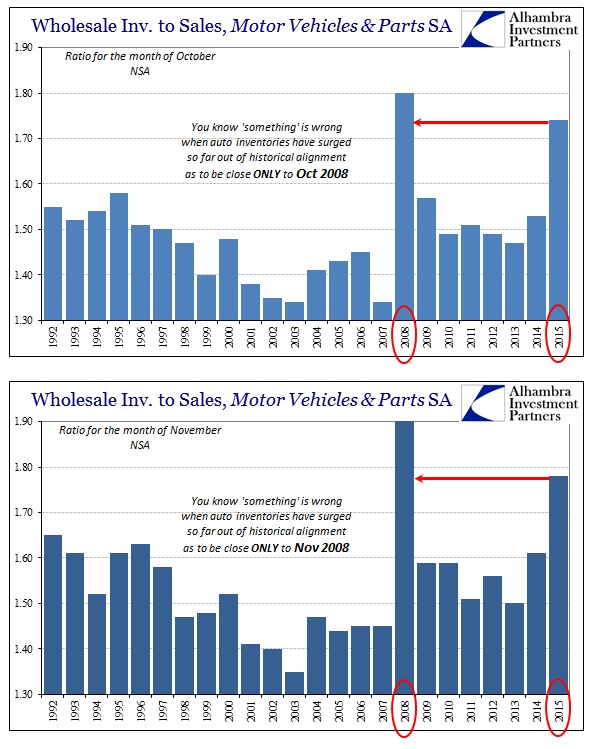 If autos are going to set records in 2016, they are going to have to work off a huge production overhang leftover from 2015 first. The scale of it only compares to 2008, which should engender not just skepticism about autos but really the whole economy.

Wholesale sales overall continue to suggest recessionary conditions despite the fact that full recession factors have yet to be unleashed. Inventory growth, however, has clearly started to slow if still growing modestly at this point. In November, the Census Bureau estimated wholesale sales declined by 2%, the eleventh consecutive contraction and 12 out of the past thirteen months. Inventories only expanded by 2.1%, which was the slowest accumulation since 2009 (and more negative implications for GDP)! 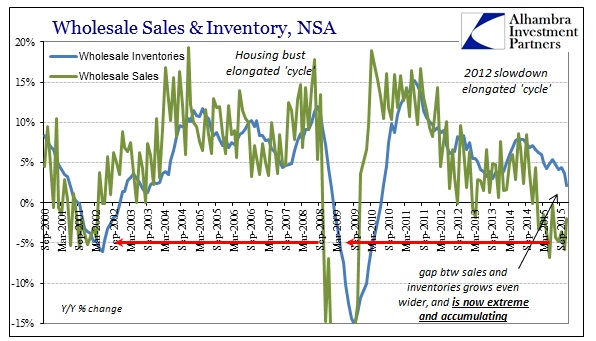 The gap between wholesale sales and inventory has started to shrink because of that, but the difference remains at an extreme. With sales still falling, inventories will have to decline and much, much faster once they do to get even close to balancing. That will require either deeper production adjustments and outright cutting or a suddenly resurgent sales environment, precisely the kind the FOMC keeps alive in theory. Since sales have been stressed and falling for more than a year, not just in wholesale terms, it is difficult to assess why they would suddenly start to do the opposite. 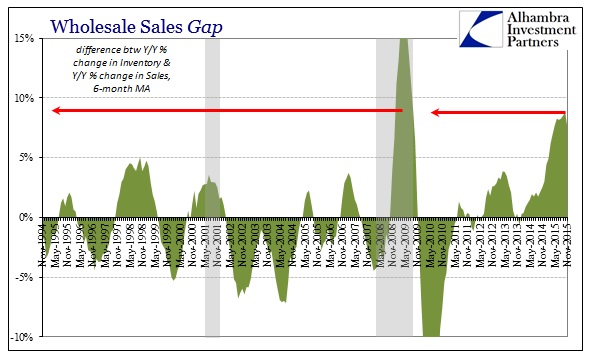 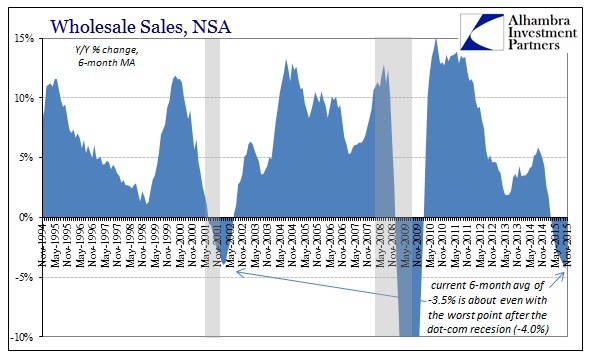 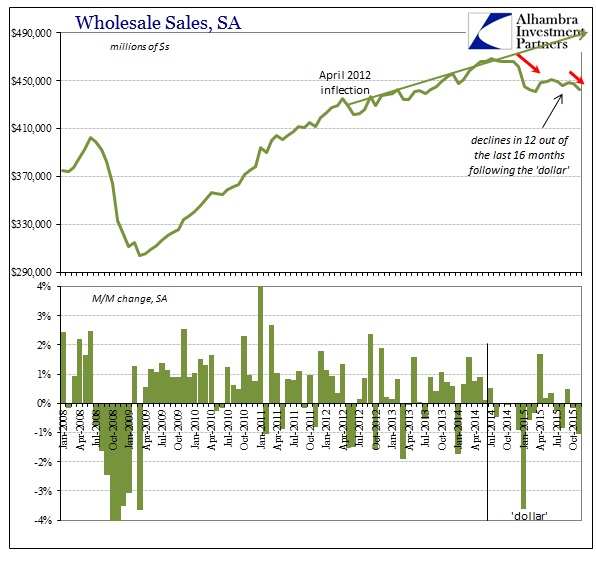 Instead, the lingering contraction raises still further the potential and scale for urgency. As with factory orders, we can estimate the size of the deficiency or hole in revenue terms. Undoubtedly, wholesalers and their manufacturing counterparts were expecting big things from 2015 since every economist in sight of a TV camera or internet reporter declared as much. If we use 2014’s growth rate as a conservative baseline, just +4.3%, we can reasonably assume in the aggregate wholesalers were expecting at least that for 2015 (and likely much more). It seems rather obvious that is why they took as much inventory as they did. 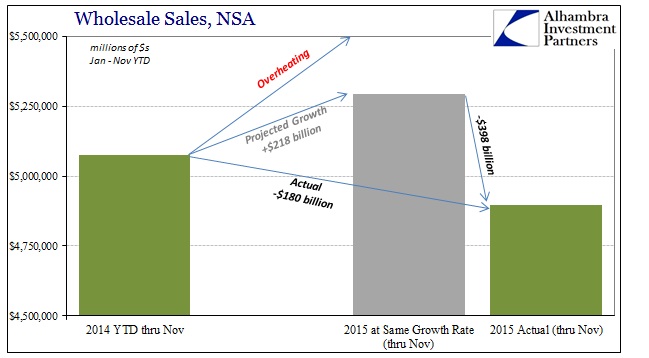 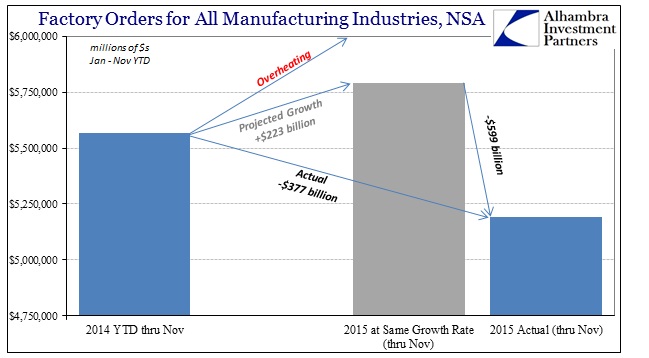 That is consistent with the $600 billion hole in factory orders (the difference being both inventory level disparity and the fact that factory orders include a significant amount that will be canceled in the normal course of business, let alone in any recessionary adjustment). And like factory orders, there is no hint of a turnaround or visible prospect for that to change in the near future. In fact, given the events and data of the past week; only further bleakness continues to persist and spread.

These are not minor economic setbacks nor are they proving “transitory”; quite the opposite. The scale of inventory suggests that the coming adjustment will have to be large, leaving only the timing of its start and its ultimate pace as variables to be determined. All that includes autos, which would be a huge blow to the economy since a bad as production levels have been of late, they have been so despite whatever large and continued boost from auto production. If that were to fall off, and inventory and December auto sales suggest it at least serious consideration, then the manufacturing recession will become truly ugly and leaving the rest of the economy needing nothing short of a miracle (and the FOMC with no more magic to provide one).