Not Only Is There No Inflation Anchor, Expectations Increasingly Suggest A Very Bleak Future

Not Only Is There No Inflation Anchor, Expectations Increasingly Suggest A Very Bleak Future

The US economy is supposed to be nothing like its Chinese counterpart, a sentiment that extends in the mainstream well past that into genuine surprise about how it would be possible US financial markets tripping over Chinese stumbles. Though the US might be fighting, too, a manufacturing slump that looks more like recession every day, convention still holds that the US is on the upswing while it is China’s descent alone that troubles anyone. That was the point of Janet Yellen’s December action, to proclaim it at least in symbolic deed.

Yet, for all the supposed differences, we find policymakers on both sides of the Pacific rushing to reassure in almost the same manner as markets on both sides fail to cooperate. China has a renewed stock market problem and currency slide that makes a mockery of all its prior attempts at reassurance.

The selloff is a setback for Chinese authorities, who have been intervening to support both stocks and the yuan after the worst start to a year for mainland markets in at least two decades…

China’s domestic stock market has become one of the most visible symbols of the government’s struggle to win back investor confidence. After cheerleading by state media helped fuel an unprecedented boom in mainland shares last summer, the market crashed as regulators failed to manage a surge in leveraged bets by individual investors. While a state-sponsored market rescue campaign sparked a 25 percent rally in the Shanghai Composite, those gains were wiped out on Thursday as the index headed for the lowest close since December 2014.

Stock market concerns, as well as “dollar” currency concerns, for that matter, are being fed by increasingly difficult economic estimations. The progression of probabilities is decidedly working against the PBOC, as declared bottom after bottom falls by the wayside and all signs still point downward.

In the US, that progression is a little different but still ends with everything looking increasingly negative and seriously so. We started the year with oil at $50-some and “transitory” and the lingering effects of 5% GDP stoking only hugely positive expectations. The year ended in almost opposite shape, with oil now threatening instead below $30, an all-but-declared manufacturing recession and still more dire threats to broad economic function yet to be unleashed (an inventory problem, primary among them, that by all orthodox count shouldn’t exist under such strong conditions). As such, the Fed raised its interest rate target along with several of its ineffective toys, but rather than markets here rallying around that view they have still moved highly contrary. 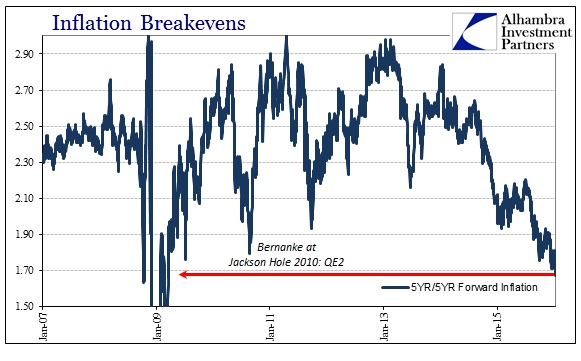 Janet Yellen has practically staked her entire recovery view, and that which supposedly underpins the “overheating” potential that “requires” monetary “tightening”, on inflation expectations alone. While everything has gone south around her, she has made a concerted point of proclaiming that intermediate expectations signal better days just ahead. When she declares long run inflation expectations “anchored” what she means is that any nominal economic problem now isn’t concerning since it is not expected, by that anchor, to push the economy off the intermediate track. Her biggest problem in that respect is that she can’t find that narrative, either, in anything other than econometric models of self-circularity. The Fed’s preferred market-based measure of just such a factor has not only been contrary to Yellen’s assessment, it has become increasingly so.

This forward calculation is interesting for what it proclaims to be – it is, essentially, a measurement of the change in rates expected by the “market” over future five-year intervals. Thus, the first five-year interval measures the state of current affairs and whatever immediate aftermath; the second how successful anything done in that first will be in restoring long-term expected health. For the Fed, that should be about 2.5% in order to represent both the 2% inflation target and the upward time value and slope of money curves. 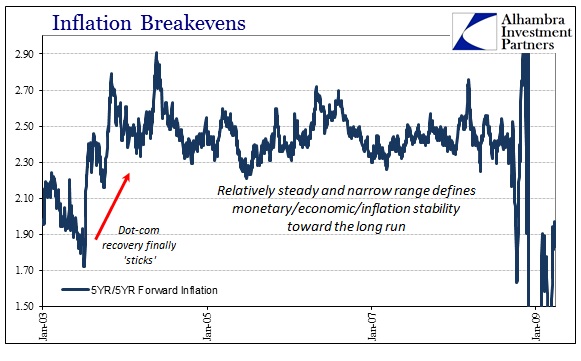 From the middle of 2004 through the middle of 2008, the 5-year/5-year forward rate was rather steady at just about 2.5% with some relatively small variation. It represented everything that Janet Yellen wants so desperately to see right now – despite rising consumer inflation especially into late 2007 and the first half of 2008, the forward rate remained almost rock steady. Then, after conditions clearly worsened in the middle of 2008, the forward rate again remained mostly untroubled (it barely budged even from Bear Stearns). From the perspective of monetary policy, it was validation of market faith that policymakers would get it right over the intermediate and long term no matter the grand challenges they faced.

That all changed, obviously, in September 2008 when forward rates first crashed, suggesting for markets it had, in fact, all gone horribly wrong and that ultimate faith in the Fed was misplaced and even dangerous. As if that point needed further emphasis at that time, the forward rate surged in late October/early November 2008 only to crash (far worse) a second time, further punishing those that jumped back aboard the faithful orthodoxy. It was validation that the Fed knew nothing about what was happening and that being caught so meant a very rough expected future – to the point of severe economic impairment beyond the short run. That expectation has also been validated. 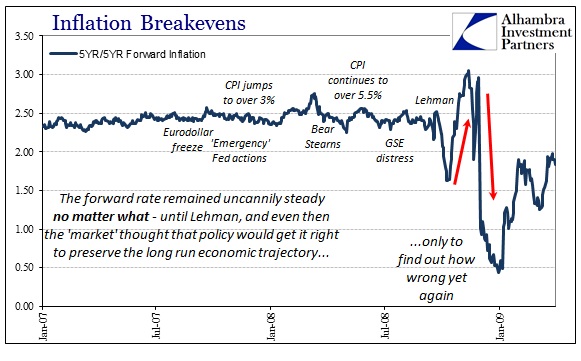 What was once the FOMC’s rock of expectation is no longer. Forward inflation rates have tumbled since June 2014 suggesting (and confirming) it was utterly ridiculous to suggest oil prices were only on some temporary, technical break from $100 and more. Worse, though, is that since the forward inflation rate is ostensibly a view on the long run we have to interpret its descent over the past nineteen months in those terms, just as was done, belatedly, in 2008. In other words, market-based inflation differentials are supposedly suggesting not just that the Fed is once again very wrong in its assessments of both the economy and its own ability but that being so wrong is likely to be damaging yet again beyond the short run.

This market measure, the Fed’s preferred number, is saying in 2016 that there is little to zero faith in either the economy or monetary policy in either the short-term or beyond it. If this was just some cyclical, garden variety recession developing forward rates would, as 2007 and early 2008, remain undisturbed. That they are sinking and sinking fast of late suggests, strongly, that pessimism is deep and structural. Undoubtedly, a great deal of that skepticism is warranted by the fact that economic and financial conditions have continued in the wrong direction all the while the FOMC declares, despite visible and open outbreaks, either that what we see isn’t what we see (August) or that any irregularities are just unimportant and irrelevant. It doesn’t register much toward restoring lost faith and instilling confidence. Instead, it proves yet again that the FOMC and economists are not just hopelessly out of touch but downright delusional, describing an economy that nobody else can find.

Thus, like China, the potential picture painted by forward inflation rates is not just that the looming potential of recession is a nasty proposition but rather that its appearance and increasing probability is paradigm altering, fostering deep and significant uncertainty about what might be over the horizon. It is there that China and the US have such similarity, where markets increasingly reject the main thrust of any policy attempts and threats. The comparison is brought out by nothing other than the eurodollar reinforcing that view through oil, junk, EM currencies, etc. Rather than paring back that catalog, as a strong economy actually would, the list only grows and with it the long run concerns.