All That’s Left Is The Cleanup

All That’s Left Is The Cleanup

The scale of the inventory bloat in the latter half of 2015 was perplexing. By any reasonable standard, it doesn’t make any sense that businesses would be so bold as to almost ignore sales (and this applies at each level of the supply chain). The only way that it could have possibly occurred was businesses setting aside what was happening in coincident time in the belief that it was a temporary deviation from much, much better times just ahead. In other words, a significant portion of the “goods economy” must have been operating on the mainstream, orthodox narrative.

For anyone outside, it seems almost preposterous but such is the operation of complex enterprises. How does one go about forward ordering? The Blue Chip Economic Survey is still present and accessed widely by businesses along with the constant media presence of policymakers and economists (redundant) never deviating from their promises that any sales problem would be “transitory.” The message was to set aside, mostly, the current sales environment and order for that much better future the Establishment Survey and unemployment rate assured was right there. After six years of no recovery, it was too tantalizing a prospect.

That imbalance, however, contained finite limitations. As much as business wanted and needed to believe in the fairy tale, they could only do so for so long on belief and hope alone. Reality had to converge at some point; either the sales would show up as promised, truly strong and not economists’ downgraded and reduced standards of claiming any positive number as strong, or the whole thing would have to be scaled back, retail to wholesale to manufacturing and beyond. Recession.

My instinct has been that the Christmas season would be the final chance for economists to deliver, the last straw for the economy to actually live up to ordered expectations. It didn’t; retail sales published this morning were slightly better in December than November but that was just monthly variation rather than meaningful improvement. Worse, given how bad November really was, slight advance was really none at all. The entire Christmas season (including autos!) was a total washout. 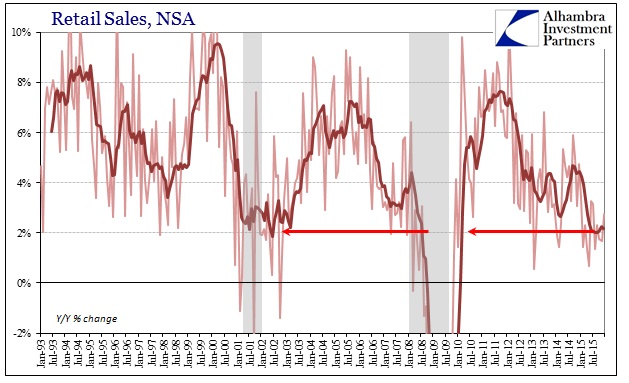 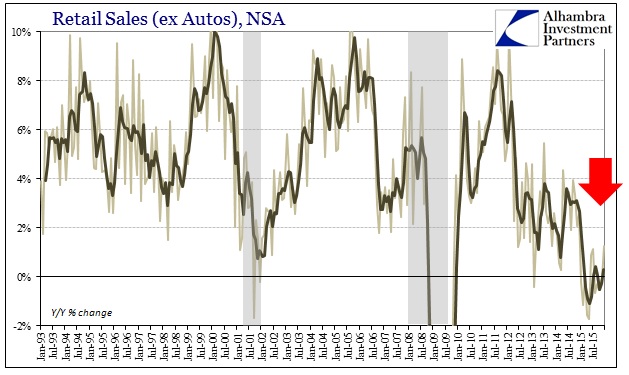 Already, we are seeing signs that production is starting to just let go; transitory and the recovery narrative is dead. Among the first, the Fed’s Empire State Manufacturing Survey today, for January, crashed to the levels of March 2009!

A reading of New York-area manufacturing conditions in January fell sharply, suggesting production in the region has stalled and raising questions about the outlook for the economy.

The Empire State manufacturing index sank to negative 19.4 in January from a revised negative 6.2 in December. This is the lowest level for the index, a key early reading on manufacturing, since the midst of the last recession in March 2009.

Economists may be surprised by it, but the top-level sales environment has been in recession for some time. Despite recent increases, purported, in the Establishment Survey’s view on the labor market, this was the 2rd worst Christmas shopping season not just this century (including autos), but in the entire data series going back to 1992. Combined retail sales grew by slightly less than 2.3% November and December over those two months of 2014, which is less than the 2.9% gained in the Christmas season of 2001 which closely followed September 11 and included one month within the official dot-com recession. The holiday season just concluded was even inferior to the growth rate of Christmas 2009 (meaning it isn’t “inflation” to blame). The collapse around the holidays in 2008 was the only time we have seen worse retail growth. 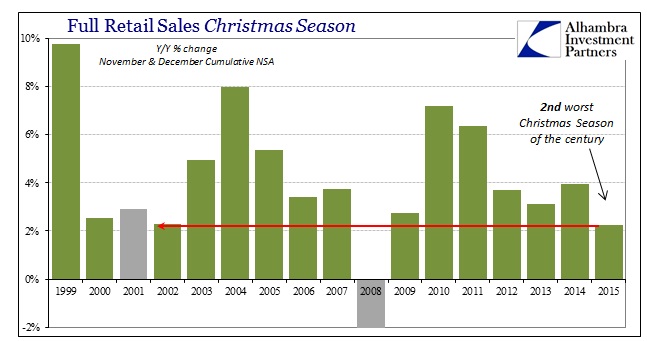 And so it spreads out from there, with nominal growth rates ex autos barely positive at all. The growth in retail sales including food sales but ex autos was just 1.4% for the two months; ex autos and food, just 0.7%. In both series presented immediately below, the season for 2015 was almost identical to 2001. 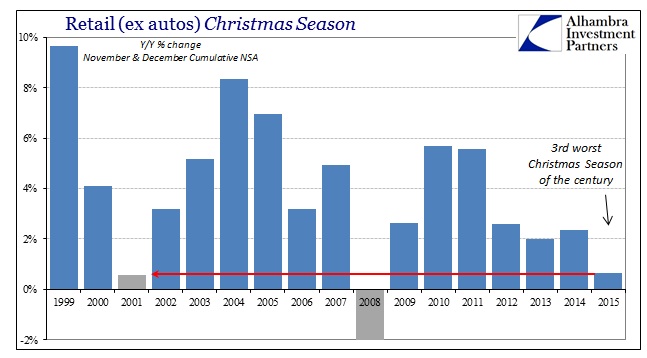 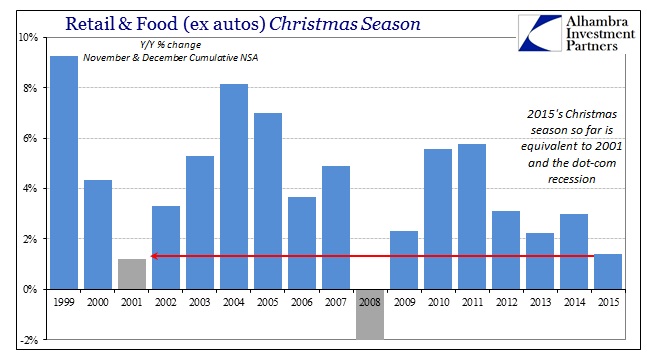 In view of the mainstream employment numbers, it just doesn’t make any sense. However, this is not the first year that spending and estimated labor gains have so diverged. Before 2012, there had been a pretty solid relationship between calculated employment gains in the 6 months before November each year and the retail sales growth rate for the overall Christmas season. Since 2012, especially 2013 and 2014, there appears no correlation at all; job gains supposedly accelerated wildly but that produced no positive boost for spending. Quite the contrary, retail sales during Christmas have only decelerated, with 2015 being downright recessionary in comparison to all other years. 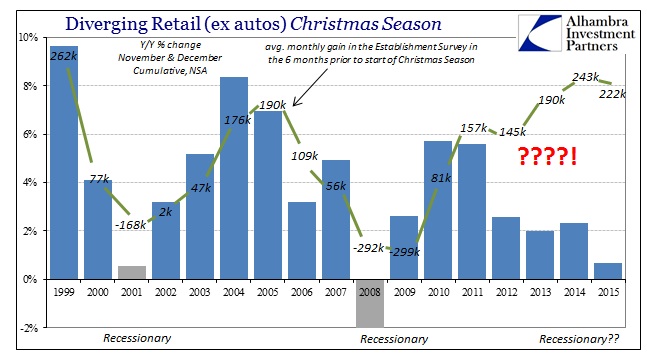 The potential full scale of the production adjustment that might be needed to balance out to actual sales is revealed not really by Christmas but by the full year. The atrocious holiday season being the last straw, the cumulative totals for 2015 disclose why that might be. Including autos, 2015 was the third worst year for retail sales growth in the entire series. Only 2008 and 2009 were below last year, and at just 2.1% that is clearly on par with only the dot-com recession (retail sales for all of 2001 were 2.8% above 2000). 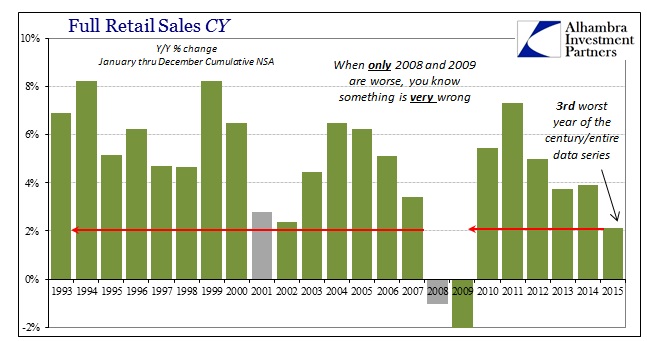 Excluding autos, consumer spending has only been worse in 2009. Retail sales ex autos (with or without food sales) were appreciably unhealthier in 2015 than either 2008 or 2001! 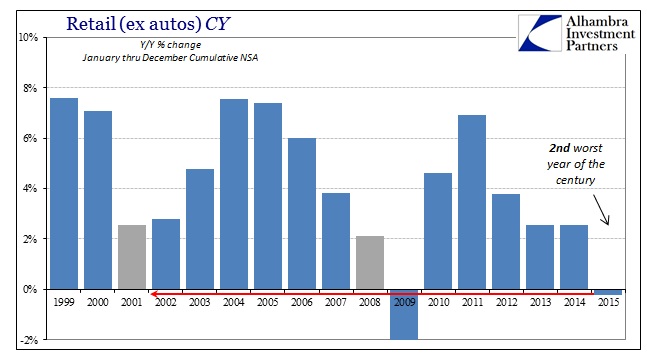 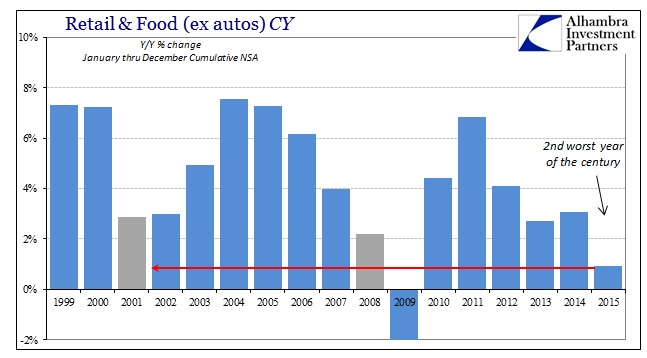 It is impossible to know what businesses were hoping for out of the promises for economic gains past all the “transitory” weakness, but there can be no doubt that what happened wasn’t even in the same ballpark. The productive and sales economy, the goods economy, was looking for at least solid growth if perhaps unspectacular and what they got instead, both Christmas and full year, was a bad joke. The economy just isn’t there; the fact that it hasn’t been for all of last year increasingly means that, for even those predisposed to the Blue Chip forecasts, it isn’t going to be, either. All that can possibly remain at this point is the surrender and adjustments – something seen already in markets once glued to Fed proclamations.

In that context, the Fed’s December rate hike actually makes some sense at least in the form of rational expectations. It was the last attempt to revive positive urgency, to get some kind of economic boost at the latest hour by injecting at least one last sense of confidence before the clock struck midnight. Now that it has, as it increasingly appears, all that’s left is to clean up.