Full Appreciation of Non-Neutrality Accounts For A Lot

Full Appreciation of Non-Neutrality Accounts For A Lot

It’s one of those myths that persist no matter how many times it fails to live up to itself. Perhaps that is due to the fact that it originates in simplifying assumptions that allow econometric models nothing more than avoiding disqualifying singularities (infinity) in the equations. I am thinking about the assumption that is widely used in orthodox theory that money dealers are neutral, and neutral in several fashions. In that respect, it isn’t as foundational as the root of efficient market theory, itself grounded in rational expectations that wasn’t anything other than avoiding an infinity on the expectations term so that DSGE models could become a reality. But still, in terms of interpretation and non-quantitative expectation, holding on to dealer neutrality misses a great deal of what has already transpired – and thus, potentially, what might still be coming.

Dealers are treated as if they run a matched book across multiple dimensions; from currency to net risk in positions. They are assumed to be benign processes which undertake minimal effort to match disparate market positions on any trade; nothing more than a match-maker of sorts. Even if theory might allow some risk-taking, it isn’t believed much more than fleeting. Looking at dealers in that fashion, you might get the sense that little real effort or, far more importantly, resources are required.

Viewing just the history of Swiss banking destroys that proposition. Unfortunately, economists don’t consider the Swiss bank participation in eurodollar “money” to have been money dealing at all. They just don’t consider the eurodollar; which is why all during the time Swiss banks were shouldering a great deal of eurodollar expansion, running mismatched positions up and down their system (in “dollar”, no less), Alan Greenspan and Ben Bernanke were perplexed so much they actually (and in public) proposed something so ridiculous as a “global savings glut.” As you can clearly see by the two charts below, Swiss banks were running a “dollar” expansion enterprise in all sorts of risk transformations (which is what money dealing attempts to allow for banking), including a mismatch in currency that had Swiss banks so very short the “dollar” up to the precipice of disaster (that being, in simple and related terms, a “short squeeze”).

In other words, Swiss money dealers were extending massive resources to the affair all the while straying so far from neutral as to be so dangerously exposed. In truth, it wasn’t just the Swiss as the entire money dealing apparatus if it could be so neatly aggregated and defined would look just like this. 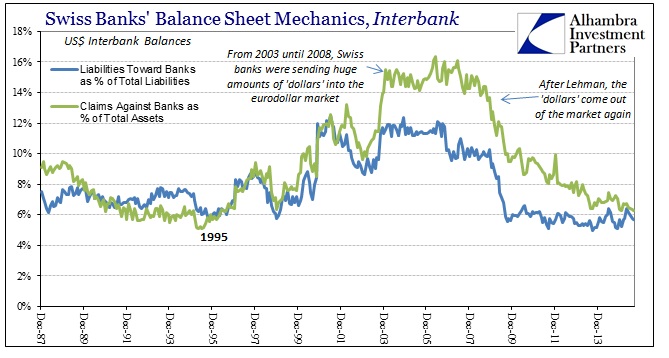 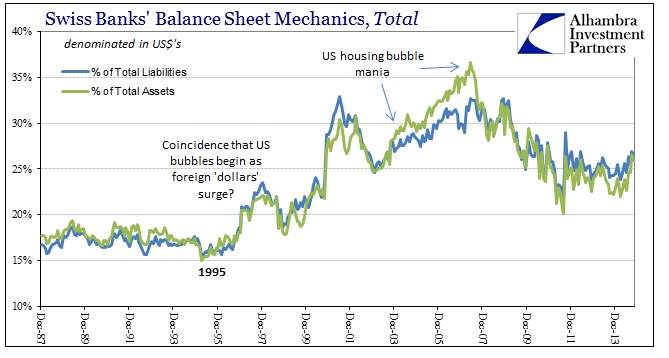 The idea about dealer neutrality should have been put completely to rest in 2008, if not from the Swiss alone. In fact, the entire panic was about mismatching across the whole global dealer network. From currency books seriously out of alignment to the massive losses on “toxic” subprime mortgages – those were nothing but holdings supposedly in warehouse inventory that dealers became stuck with via their own risk speculations that blasted far beyond the realm of “hedging” primary market functions. I think Morgan Stanley’s contemporarily tortured explanation of negative convexity demonstrates the full expression of it all.

They very notion of the Volcker Rule supposedly ending prop trading is recognition that dealers were nowhere near neutral, and that skewing so far beyond was actually dangerous. But while pure bond dealing was singled out in violation of neutrality, “money” dealing in far more broad terms is still thought something as zero sum; by “money” I am largely referring to derivatives. Perhaps it is the complexity or the fact that so much of gross derivatives are simply matched and canceled with opposite positions, but there needs to be appreciation for the resources required to intermediate even in theoretical neutrality these complex functions.

Further, and perhaps more important, it seems more than suggestive that in order to undertake those complex dealer intermediations requires something of a profit subsidy. Not only are capital charges to dealer activities rising, ZIRP has wrung out all of the profitable spreads leaving something like raw speculation as the last and only resort by which any bank might even think of entering the dealer market. The history of bank positioning in this regard leaves little doubt on that account; the fact that gross derivative notionals followed far too closely to the QE’s more than suggest that dealers are not taking neutral derivative positions in pure money dealing but rather looking to efficiently maximize all resources committed in those desks via the same kind of attempts as the prop trading in mortgage and ABS dealing during the housing bubble. In other words, if they are already there, why not “hedge” the hell out of everything in the direction QE was pointing?

And it’s also important to note who “they” is. In the post-crisis era, the “they” is far more foreign than domestic. As noted in October 2014 in reviewing some marvelous work by Zoltan Poszar, then of the Treasury Department’s Office of Financial Research, trying to literally map out the wholesale format, it was clear that resources had shifted overseas.

That would suggest whatever is left outside of this domestic focus is quite susceptible to essentially eurodollar financial considerations – perhaps offering another compelling explanation as to why the global dollar short is so asymmetric in 2014 compared with even 2013 and prior. And while that may seem to be a better place domestically, I think the opposite interpretation is more appropriate given that the domestic system has been seriously eroded and that the foreign system now having moved away from “eurodollar Europe” to who knows what in its place.

Again, I think there is a great deal of merit in how Mr. Pozsar presents his view, but that it is still dangerously incomplete (again, with much respect for the tremendous effort and what was accomplished). I would include in that criticism the continued tendency to stylize and compartmentalize (which may just be unavoidable), not just in the global dollar system as presented here but also the dealer system which for some reason always seems to split securities “flow” from derivatives (they are all one) and to assume dealers are neutral (always a matched book).

If we align these two pieces it might allow us to better understand 2015 and 2016. In short, foreign dealers were not neutral on the US and global economy. As it became clearer that being, for lack of a better expression, “long” the economy (in everything from inventory to bond dealing to the money dealing that indeed goes along with it including dark leverage) was a terrible position, they rushed to bleed resources out as fast as they could. The foreign focus of the “dollar” during this time, I believe, explains a great deal of why we see so much of China (via Japan?) as the central axis (as I referred to “who knows what in its place” in the quoted passage above). You have to think that as foreign money dealers were at one point so enamored with the global economy it extended especially to China (and other EM’s, particularly, just less extensively) and perhaps with Japanese banks adding that marginal capacity.

In reverse, then, eurodollar resources are being pulled back from foreign systems by foreign banks. It would start to explain why so much of the turmoil of the past year and a half has been itself seemingly overseas. But, and this is the truly important part, if dealers are not neutral then it doesn’t matter that most of the trouble has been focused beyond the United States; at some point, because money dealing in the QE’s had been really nothing other than a massive crowded trade, it would turn everyone’s book bad. Worse, it would inevitably do so in increasing alignment; at that point, dealers/banks can only run for cover. They have certainly been doing that, a fact we know full well via swap spreads. 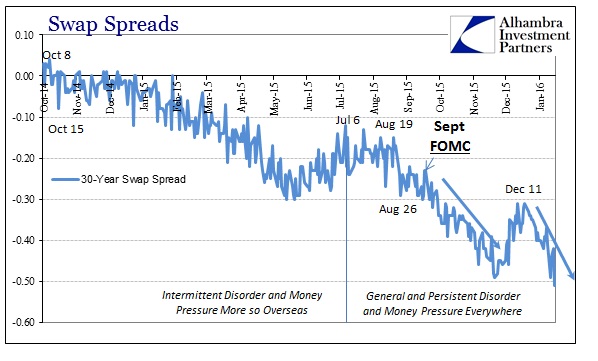 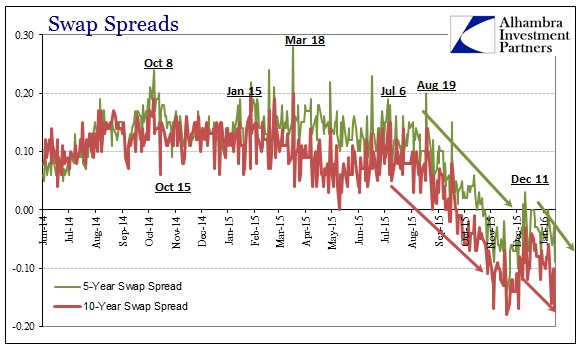 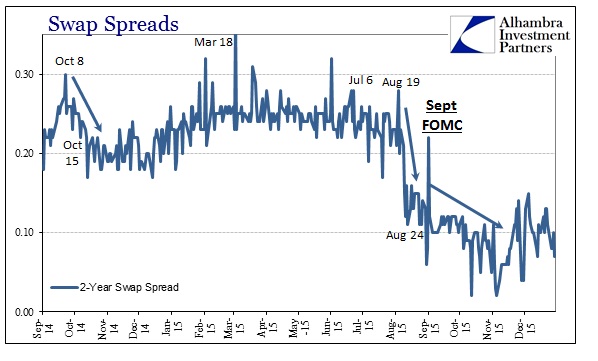 I warned back in September to ignore swap spreads at your own peril. Ever since the broad spectrum of swap spreads turned negative or deeply compressed (around July 6) the whole world has gone haywire, and has remained that way. There were, to be sure, selloffs and irregularities in 2014, but the intensity and connectivity of those in the latter parts of 2015 are clearly something else – no longer the foreign money dealers reacting in offshore “dollar” markets alone. I think that is why the selloff is spreading far and wide, increasing, again, in intensity each time. I think it also suggests why the Fed appears so very utterly defenseless against global illiquidity (again!). It would also (help) explain fragmentation in the money markets, as geographical distinctions to my mind were never addressed let alone solved in the eight and a half years since this all started.

Policymakers and regulators never addressed the systemic deficiency that caused the 2008 panic because, I believe, their orthodox pieties didn’t allow that full accounting and appreciation. Instead, they made some noise about “toxic” mortgages, TBTF and all that but truly did nothing of consequence that would have at least presented the possibility of avoiding a rerun. What they did do, however, was, via largely QE’s, actually amplify the risks of fragmentation by implicitly encouraging the worst kinds of behavior surrounding money dealing yet again (if only in a different financial location and focus) all the while setting up potential and maybe even deeper geographical fault lines. I doubt it would have made any difference if monetary policy had accounted for non-neutral money dealing, but that doesn’t mean it should not be appreciated by everyone else trying to figure out what is going on (subscription required).