A Strong Indication of What Changed In January For the PBOC

A Strong Indication of What Changed In January For the PBOC

The official word from China, in the sense that whispers and unofficial back channels counts for any kind of imprimatur, was that last week’s huge surge in offshore yuan money rates was at the request of the PBOC using state banks to squeeze those damned speculators. It was perhaps an usual step to take in that the PBOC’s major efforts are almost always hidden and intentionally suppressed; this was very public and open. That suggested that either the PBOC was back once more, like August, with little other option or that something else was going on.

There has always been a reverential deference in the media with regard to the PBOC’s believed abilities. It wasn’t all that long ago that “devaluation” in the yuan was taken as intentional vigor under the PBOC’s order clearing out “hot money.” That proved far too charitable an interpretation as the events of 2015 leave little doubt that those events in early 2014 were an early warning they were going to lose control. So it was with HIBOR rates last week, where the O/N rate at 66% even if deliberate in ridding the offshore market of speculators still reeked of despondency in breaking silence.

New data from the PBOC’s balance sheet suggests that it may not have been so much aimed at speculators as preserving forex availability (and why physical dollars may be so short in China). For all the confusion that typically accompanies central bank and monetary accounting, the PBOC is relatively simple. There are assets, primarily of forex “securities”, which drive the growth rate (or contraction) in liabilities which count for money. The major forms of such money or liquidity are physical cash and bank reserves (called “Deposits of Other Depository Corporations”).

As noted here a month ago (subscription required), the adjustments in November were quite stark and telling. Total foreign assets declined by RMB256 billion, RMB316 billion in terms of forex securities (and whatever derivative assets count in this unspecified pile). That decline was partially offset by a RMB153 billion increase in the asset line “Claims on Other Depository Institutions”, which is the liquidity and term liquidity loans under the SLF to primarily the large state owned banks like China Development Bank. With some other more minor changes on the asset side, total assets for the PBOC “only” declined by about RMB100 billion. From that we should expect a similar magnitude reduction in primarily bank “reserves” on the “Deposits of Other Depository Corporations” line.

Instead, the PBOC’s measure of bank reserves, general yuan liquidity for internal uses, declined by a rather massive RMB505 billion. The reason was primarily the central government; it’s balances rose by nearly RMB300 billion which had the effect of reducing liquidity available to the banking system. That suggests why conditions in November were radically worse than October.

In December, however, China at least in money market terms seemed much calmer. The CNY exchange rate continued its “devaluation” as “dollar” financing remained elusive and troublesome, but internally there was surprising and disproportionate almost placidness (relatively speaking). The asset side reduction in PBOC forex was in December more than twice the level of November (confirming the “dollar” amplification part of this CNY liquidity system), RMB708 billion, and an as-yet unexplained drop in secondary liquidity operations to a special class of Chinese financial institutions (that were once far more prominent pre-2008); possibly the maturing and unwinding of liquidity measures put in place in June. 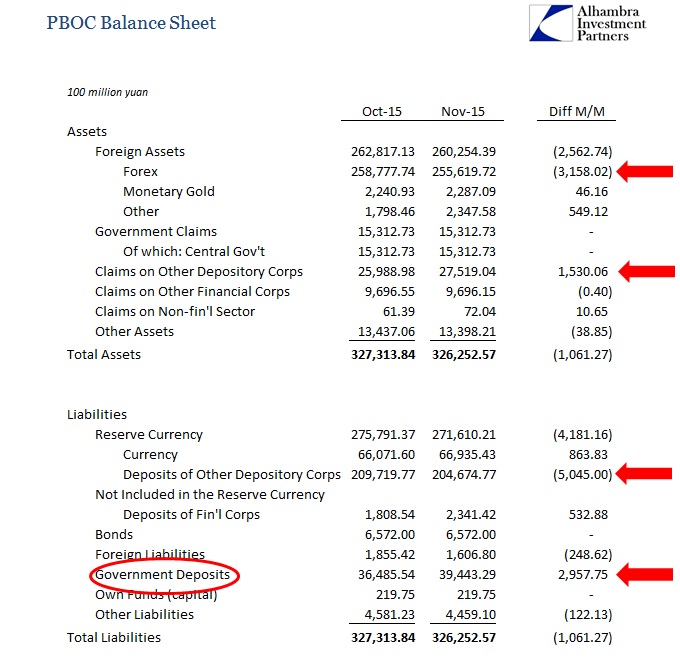 So despite the fact that PBOC’s combined assets declined by more than RMB842 billion in December, bank reserves actually rose despite the “dollar”-related turmoil; +RMB182 billion. 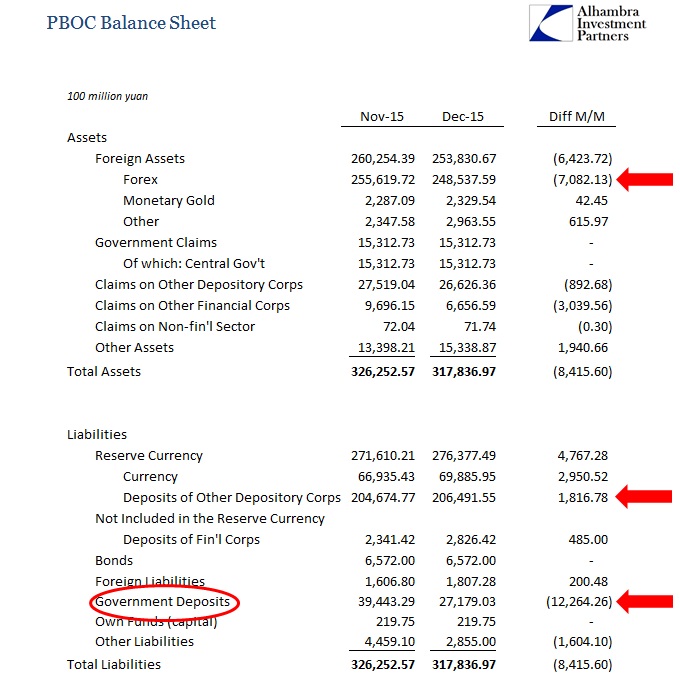 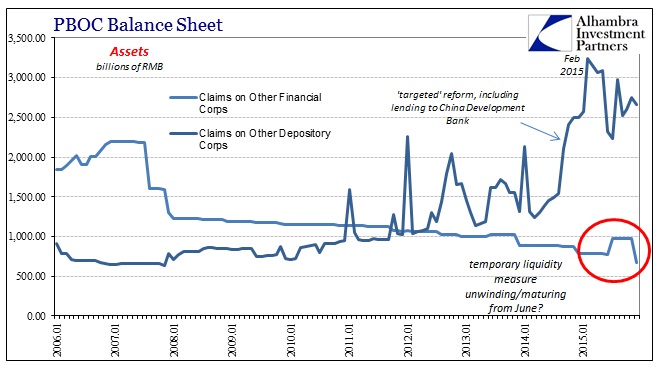 The problem with that, in context of continuous “dollar” turmoil on the PBOC’s asset side, is that government deposits rise each January. In other words, the margin afforded bank “reserves” in December was due to a temporary seasonal pattern in the central government not “soaking up” all the liquidity (as was done in November). The magnitude of reversal each January is almost equally intense (+RMB652 billion December 2014 to January 2015), which, I think, explains why liquidity in China has been so openly terrible and atrocious starting not long after the calendar’s turn.

That would also suggest the reason for the increasing desperation (subscription required) throughout the month of December, as the PBOC was practically advertising its growing discomfort. It wasn’t just the “dollar” end of the balance sheet, though that has been a constant drain, it was likely the knowledge that the central government’s regular activities were only going to be a one-month reprieve so that come January bank reserves would once more be under extreme pressure for both assets and liabilities. The events so far this month seem to bear that out.

Global markets are left to twisting for the implications, which is also what we see so far in January including just the hint of the PBOC going back to possibly its March position (subscription required).