One follow up point to this morning’s missive about why the economy seems to be converging in recession rather than full and blossoming recovery: There must be something said about the manner of redistribution in this “cycle” as different from all others. In other words, the Fed has been attempting greater and greater redistribution efforts via monetary interference ever since Solow and Samuelson predicted their disastrous “exploitable” Phillips Curve. At least in 1961 the Fed was as much a captured article of Treasury’s orbit, but after Greenspan (or Volcker, we don’t really know) moved to interest rate targeting (and eurodollar denial) the intent has been quite evident.

We can measure such things in raw, absolute terms, as the FOMC targeted a low of 3% for federal funds by September 1992. And while ostensibly in recovery, the economy experienced its first “jobless” version (just ask Bush Sr.) during the whole of the low-rate regime. The next cycle, after recognizing just the contours of a grand monetary shift, Greenspan by June 2003 had federal funds targeted at 1%; (not) coincidentally that was another and more prolonged “jobless recovery.” We have now not just ZIRP but much more than that the jobless nature of the economy this time is in a class by itself far removed even from those prior two. 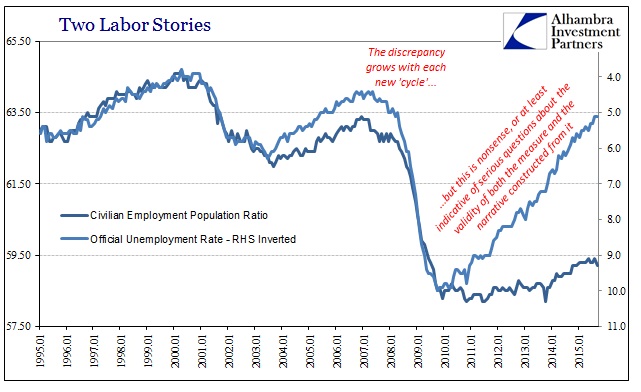 The things that have happened over the past eight plus years (the first “emergency” rate cut was September 2007; since that initial moment of “stimulus” we have anyway received the worst recession and then the worst recovery of any cycle dating to the 1930’s and it isn’t even close) would have in 2006 seemed so far beyond radical as to have been plain absurd. Redistribution predicated upon the increasingly bizarre begins to describe our economic deficiency quite well, I think; including the growing unease about having another recession without ever finding recovery from the last great one.

To appreciate that point in all its “glory”, we need only look to Japan yet again where, if orthodox economists survive this one still with any influence at all, we find our future. Japan has pioneered the absurd, but we mustn’t think we are all that far away from this (thanks to L Bower for pointing it out):

The Bank of Japan’s purchase of corporate debt at negative yields for the first time adds to distortions in Japan’s bond markets and raises risks for investors and banks, according to Mana Nakazora, the chief credit analyst in Tokyo at BNP Paribas SA.

What planet are we living on? It is, at least, truly the death of money both as an economic tool and even the living, historical concept. Again, if we think that only something for or from Japan, ask yourself what a Yellen might do if 2016 turns out the way it is shaping up. Our future is continuously bleak as central bankers cling with religious devotion to increasingly absurd redistribution schemes, or to fix the error – them.