It is said that a tsunami announces itself when the ocean suddenly and for no apparent reason recedes back farther than anyone could imagine. Left stranded are everything from beachgoers to fishing vessels of all sizes and even marine wildlife suddenly exposed to the open air. The spectacle creates a dangerous curiosity which the naturally curious humankind has difficulty avoiding. There were many stories of similar behaviors in the biblically deadly 2004 Indian Ocean tsunami, as people at these beach destinations were stuck in place by the sheer nature of the event; to their own mortal peril.

This is admittedly at best a fitted analogy, but you get the point. There are times when so unnatural seems some occurrence that it overrides common sense. There is no logic to it; it is its own logic. That dangerous process is all the more so wherever the phenomenon stretches into symptoms or outbreaks that are unfamiliar even under benign circumstances. Such it is with this dollar “run.”

It has all the hallmarks of a bank run, only that there isn’t (maybe) the traditional features of convertibility that everyone heard about in their ancient economics textbooks laying blame upon gold. Currency elasticity in the form of central banks authorized with full discretion and flexibility was supposed to have relegated bank panic to the same past as those books. The events in 2008 put that notion to rest.

What was curious about the “run” in 2008 was that it wasn’t currency or money; it was wholesale of things like eurodollars, repo collateral and credit default swaps. We are told, even today, that these are only “investments” but any close examination of the 2008 panic shows irrefutably otherwise. Repo is perhaps the easiest to understand since at the worst of the crisis UST collateral was “more valuable” than cash; thus the $5+ trillion in repo fails during the worst of it. It makes sense if you understand that the “run” at that time was an interbank run, not an external convertibility run, and thus the currency relevant to that run was not “cash” (itself in various forms) but collateral.

This one is different still, but the telltale signs are still there. Unlike 2008, however, there is historical precedent in this format as I described in some detail about 1969 and the ultimate end of Bretton Woods. It was then a dollar “run”, too, though the calibrated “direction” seemed to be opposite (the “rising dollar” then was actually falling exchange value into “inflation” vs. now where the “rising dollar” seems to be just that, and the world dropping into “deflation”). The direction doesn’t matter so much as the tremors of instability.

The symptoms of that should be recognizable to today:

In March 1969, while Buba was busy in the quicksand of its swaps and forward dollar interventions, Netherlands Bank (the Dutch central bank) had instructed commercial banks in Holland to pull back funds from the eurodollar market in order to bring up their liquidity positions which had dwindled dangerously during this increasing currency chaos. At the start of April that year, the Swiss National Bank (Swiss central bank) was suddenly refusing its own banks dollar swaps in order that they would have to unwind foreign funds positions in the eurodollar market. The Bank of Italy (the Italian central bank) had ordered some Italian banks to repatriate $800 million by the end of the second quarter of 1969. It also raised the premium on forward lire at which it offered dollar swaps to 4% from 2%, discouraging Italian banks from engaging in covered eurodollar placements.

Banks around the world, drawing in actions on their central banks, were scrambling for dollars, and the whole global currency regime turned in on itself in what looks very much like an interbank version of a run on dollars. I have chronicled that same issue which may have broken into actual, physical currency of late, but the point is more so that the dollar “run” can be found globally. We can confirm Russia in the vise of the dollar “run” (via the trap the dollar short sets) in increasing ferocity, which, unfortunately, seems in no way out of place for 2016 so far.

Since Mr. Putin came to power in 1999, Moscow has shown scant success in shifting its economy away from dependence on oil and gas production. Now, with the price of oil flirting with $30 a barrel, Russia faces a second year of economic contraction and possible financial crisis as companies and banks scramble for scarce dollars to pay debts.

The ruble gets put into a box where the currency seems to trade with oil, which seems more an economic circumstance than “dollar.” But once you realize that oil is the collateral which greased all that prior “short” financing, the relationship isn’t so trivial in the purest financial sense. Not only does Russia and Russian banks have to scramble for “dollars”, and thus sell their oil at lower and lower prices (margin call cascades), but eurodollar banks have likewise the same task. Yet, as the Wall Street Journal notes above, there now is recognition of “scarce dollars” but no sense or even effort to answer why.

Once more, we see that the currency price has very little if anything to do with “capital flows”, inflation or interest rate differntials and everything to do with how short and intensely short the “dollar” capacity. The lower the currency runs, the more we can infer the tsunami wave of “dollar” collateral and margin calls; the interbank runs of modern wholesale. 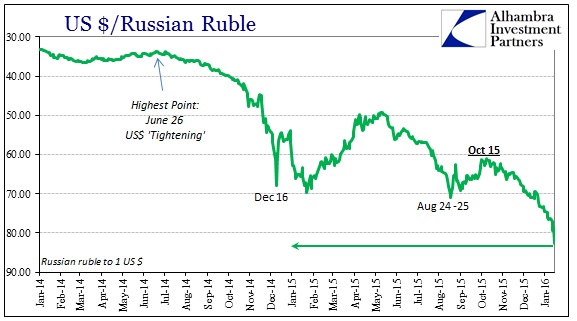 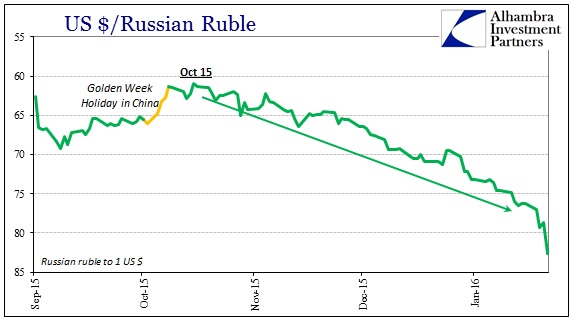 As much as China and now Russia have hogged the attention, the truth is that we spot the same intensity and resolve in the “dollar” problem increasingly throughout the world. Brazil, for example, has been perhaps more affected by the financial “dollar” difficulties than anywhere else including Russia. It is also where the tsunami/ocean receding analogy is most imperfect. Banco do Brasil has been plying various forms and functions in derivatives markets in order to try to manage the “run”; obviously it doesn’t work for more than a temporary spell. The distance of that “purchased” calm is dependent upon the “dollar” conditions itself, not the local connection to the eurodollar system.

In terms of the tsunami analogy, the central bank recognizing the ocean’s drawback has the limited ability, then, of delaying the onrush of the tsunami wave. It, as Banco clearly did and does, thinks differently as if it could forestall the wave entirely, but as Brazil is learning yet again all they get is some time; and for that time, the wave returns not as it might have before but with greater intensity and destructive power for the effort. In the eurodollar waves of this “run”, we see increasingly the signs of that in 3-month intervals between currency “devaluations.” 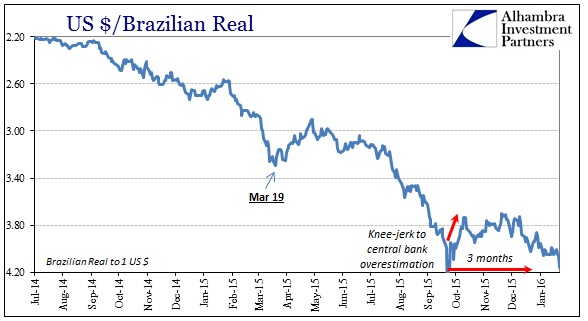 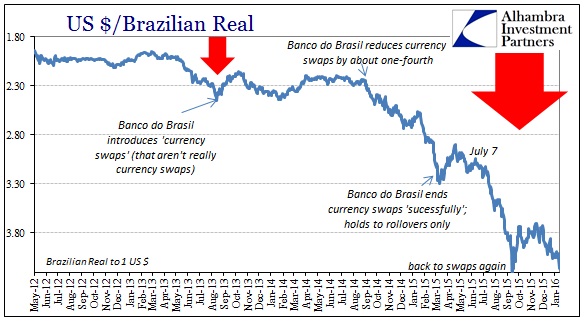 As I have written before, you would think economists would be all over this; it has all the classic symptoms that they would describe as “tightening” or shrinking “money supply.” The problem is that eurodollars totally invalidate economic theory as it is currently constituted on two major, foundational points. The first is the idea that each economy and financial system in each of these countries operate on a closed system. That is obviously false, something the Great Recession and Panic of 2008 proved conclusively. Despite the repeated references to Wall Street, the panic was centered in London and in eurodollars, propagating globally in almost coordinated fashion.

Second, economists assume the dollar is something that only the Federal Reserve can manage and control. To understand the eurodollar is to appreciate that the “supply” of it/them is solely the purview of bank balance sheet factors, and further balance sheets located often with nothing to do with the United States at all, rendering the Fed as at most an interested party. In the orthodox view, there literally can’t be “tightening money supply” because QE created trillions of dollars. Those were not, however, anything other than one form of bank liability and not even the primary or most necessary one. Thus, no matter the trillions idle on balance at the Fed, those are not relevant “dollars.”

If you believe those two factors, then, you will be continually surprised by not only these events but their relation to each other and their persistence and even growing intensity. As a central banker under the orthodox philosophy, you might even resort increasingly to the absurd.

We have the condition now where a dollar shortage is being reported more and more at the same time economists feel there is an oversupply of them. Only one of those positions can be right, and it is solved by a history economists spent decades studiously avoiding. You can watch the dollar recede and marvel at it, or you can appreciate that we have seen this before and know how it ends.