If markets have rebounded today after the sustained selloff on fresh “stimulus” hopes, then one would have to wonder immediately what the background fundamentals might be. Setting aside all notions of past “stimulus”, the call for more would seem to suggest, quite strongly, something far, far less than desirable. Yet, in the same breath economists and brokerage firms would have it both ways; the market is up because there may be more “stimulus” and also that the market is overly pessimistic. It can’t be both, because if there might be more monetary policy effort it isn’t markets that are psychologically inbounded.

Despite worries about a global economic slowdown and falling oil prices punishing the markets so far this year, a global recession is not in J.P. Morgan’s outlook. “We think it’s really all about negative psychology right now, which seems to be self-reinforcing but not based on fundamentals,” said Santos.

We can’t, however, simply set all aside from before. The two constants throughout the economic period since the end of the last recession have been persistent monetary efforts and the obvious failure of them revealed through nothing more than their persistence. Today happens to be the anniversary for the ECB’s QE which pretends as if it were some new and useful upgrade. They did massive LTRO’s at the start of 2012 and Europe fell back into recession anyway. They have narrowed the rate corridors, stuck Eonia further to nothingness and then pushed it negative with an increasing negative nominal floor, pushed forward with a third covered bond program and then an ABS program; and all of that only accomplished the “necessary” conditions for ECB QE.

It started out last year on essentially a lie:

“One could argue that this type of approach Draghi is using should have been applied much earlier, which would have gotten Europe on a similar kind of platform the U.S. was on,” Stephen Schwarzman, chairman of the Blackstone Group LP, said in a Bloomberg Television interview at the World Economic Forum in Davos. “It is never too late to do the right thing.”

US asset gatherers appear to be very much enamored with QE in all its forms but only when it is actually termed “Q” with “E.”

“We’ve seen over the last few years you have to trust in Mario,” Laurence Fink, chief executive officer of BlackRock Inc., said in Davos. “The market should never, as we have seen now, the market should not doubt Mario.”

If that is the case, then we should easily find the fruits of QE readily apparent in all things Europe. The LTRO’s were massive, but if QE is truly different than there should be no doubt at all of its imprint – and not just any inscription, but in exactly the areas and places it was promised to go and solve. The ECB announcement from January 22, 2015, leaves no doubt:

The Governing Council took this decision in a situation in which most indicators of actual and expected inflation in the euro area had drifted towards their historical lows. As potential second-round effects on wage and price-setting threatened to adversely affect medium-term price developments, this situation required a forceful monetary policy response.

Asset purchases provide monetary stimulus to the economy in a context where key ECB interest rates are at their lower bound. They further ease monetary and financial conditions, making access to finance cheaper for firms and households. This tends to support investment and consumption, and ultimately contributes to a return of inflation rates towards 2%. [emphasis added]

The last sentence of the first paragraph quoted above proclaims exactly as I have described, “a forceful monetary policy response.” Though the program did not start actual purchases until last March, the CPBB3 (covered bonds) had already “bought” €37.2 billion by this announcement. There were also indications that the financial markets in Europe were gearing up for the endeavor, with lending to non-bank financial firms just surging in December 2014 as financial firms loaded up to front the ease of central bank premium buying. 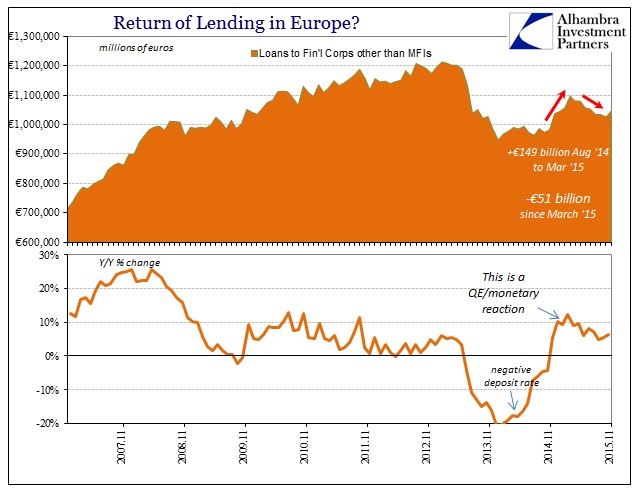 Unfortunately, so ends our detection of QE in Europe. If it ultimately contributes toward the ECB’s goal of 2% inflation, it just cannot be found a year later. Economists and policymakers may be quick to dismiss that elongated separation as the beguiling work of oil prices, but again QE is supposed to be “forceful”; an effort so enormous and powerful that it shall overcome all impediments no matter how nefarious or stubborn. That is how central bankers who use it make it sound at least when it starts, that nothing can stop monetary policy when Q meets up with E. 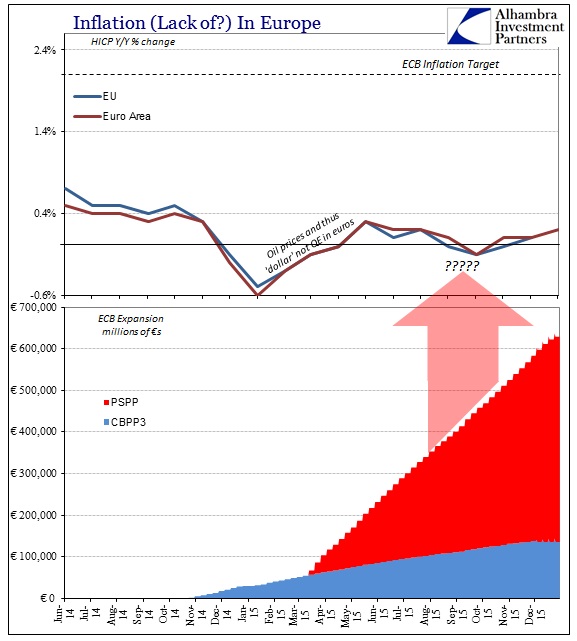 To date, QE is at €515 billion, more than half a trillion euros, combined with €135 billion in covered bonds under the third try, and inflation is still essentially zero. Worse, however, is that these are the same results as the LTRO’s. And that gets us back to the essential truth to ECB QE, namely that it isn’t any different than prior monetary programs except for the marketing. 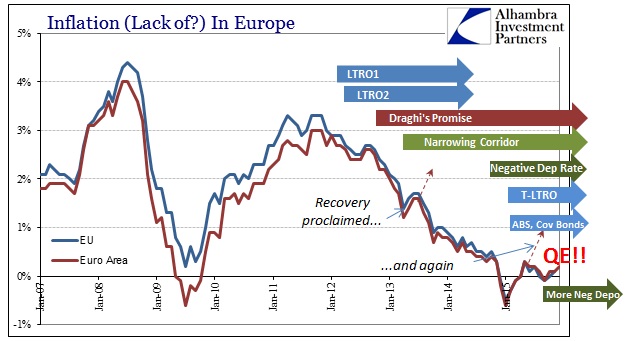 Mario Draghi for his part last year suggested that the key to all of this was credit. It was in his mind that QE would, through those fanciful “portfolio effects”, continue to push forward and restart Europe’s great credit machine last seen in 2007.

By buying eurozone governments’ bonds using electronically created money – so-called quantitative easing– the ECB hopes to shore up confidence, boost inflation, and drive down the value of the euro on foreign exchanges, helping to boost exports and kickstart growth. The €60bn a month figure includes the purchases of private sector assets that the ECB had already begun to try to unlock credit markets.

Like inflation, there is no visible impact from QE upon lending to the real economy. Loan growth has been somewhat restored in very, very modest terms, but that may be as much general inertia as monetary policy since the lending trend bottomed years ago. By any objective standard, let alone “forceful”, QE has been the same bust as the LTRO’s were. 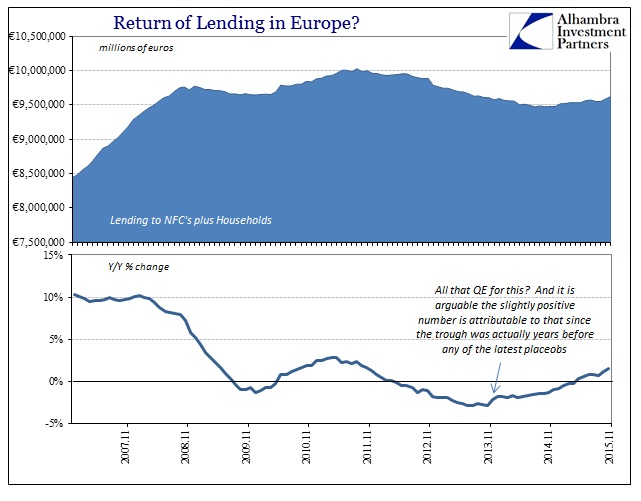 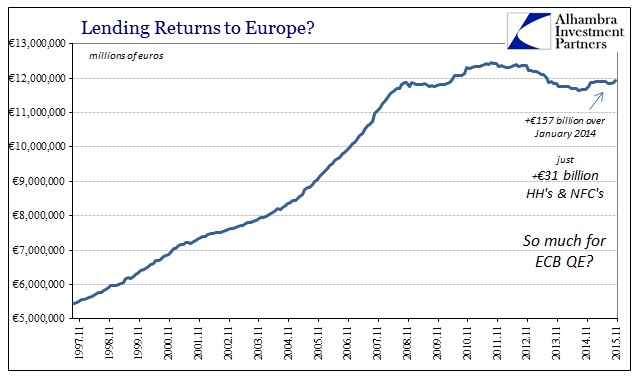 We can’t even be sure there have been any “portfolio effects” in this QE business. Despite being set by policy at a negative nominal rate, increasingly so, now minus 30 basis points, the central bank’s deposit account has seen only increasing balances throughout this “forceful” regime. That central bank account for withdrawing euro liquidity had been as low as €19.7 billion in November 2014; which makes sense given that the ECB set it negative that June and then more negative that September. However, once they started “buying” covered bonds and then especially into the teeth of QE transactions, the deposit account has built back up over €200 billion again. 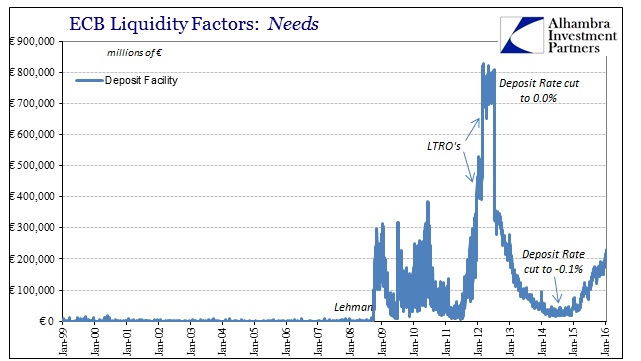 Not only that, money market rates in Europe interbank have flushed further and further negative, proving (not suggesting) that whatever idle liquidity isn’t at the deposit account is languishing and wallowing negative in money markets (or negative yielding governments) rather than perform what Mario Draghi and really all central bankers expect of them. This is the exact same, yet again, behavior as the LTRO’s produced. 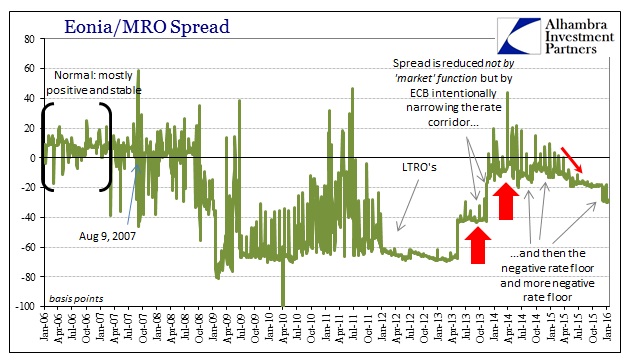 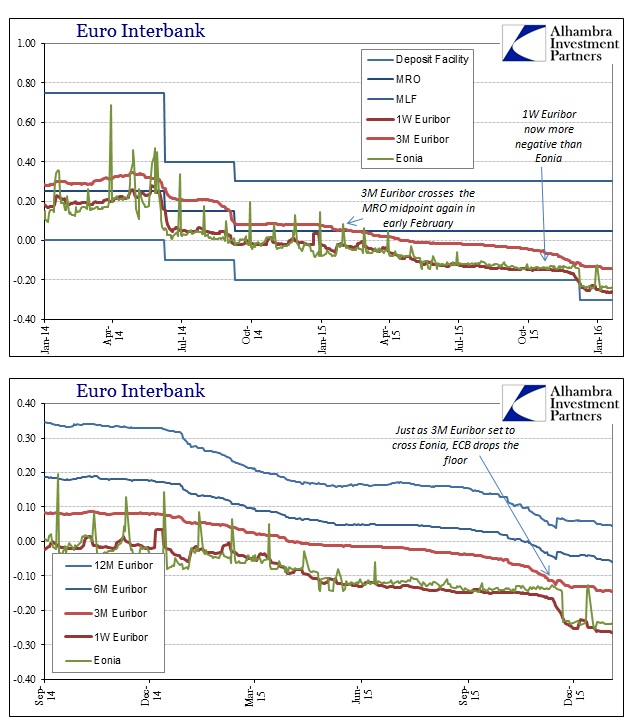 That tells us the exact same thing as the Federal Reserve’s four QE’s did on this side of the Atlantic – they produce only inert and idle bank reserves that serve no useful purpose whatsoever aside from allowing financial institutions to claim they are “forceful” when they are indeed something else entirely. For all the “money” that has been claimed to have been “printed”, credit and banking seem to have found nothing but a shortage of instead the actually useful version in all kinds of denominations.

Monetary policy has been rendered entirely impotent, which is the verdict not just of these money markets but credit markets and commodities (the triumvirate of FICC). It may also be the reckoning in stock markets, which is entirely damning since it has been stocks that reacted most charitably to all this fluff. Despite initial euphoria, market indices in Europe are lower today (including today’s rebound) than on the day QE was announced; the DAX is down 6.4%; Paris CAC -4.8%. In fact, the giddiness was but fleeting, lasting barely three months. 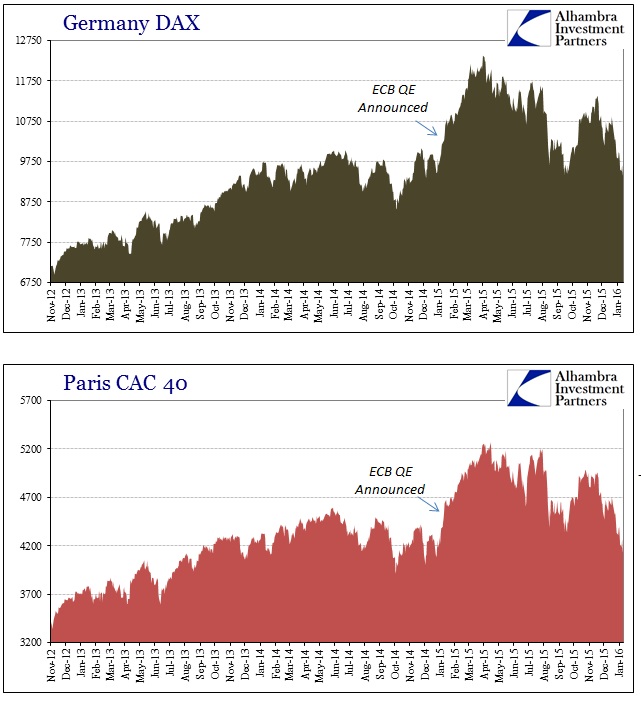 There is a basic math that supersedes all of this nonsense. The fact that QE was ever done meant conclusively that the LTRO’s (and all the other various add-ons) achieved nothing; QE is the same as the LTRO’s, therefore it would likewise be expected to achieve nothing. Sure enough, no matter where you look in Europe, you can’t find anything of QE.