Rumors persisted about Iran, Russia or OPEC close to declaring productions cuts, so that has to factor at least into sentiment about oil trading. However, with rumors being denied, the physical universe of crude oil especially in the US has been fundamentally more negative again. Yet, oil prices have reached back to almost $34 (front month futures) again today just a day after the US EIA reported a record high in crude inventory.

For answers to what may seem contradictory we need only look to the Far East (west from the US, that is). In order to view the full landscape including oil, you have to start at the end of last year. Not only was it likely that autonomous liquidity factors for China’s monetary system would reverse the alleviation of December, but the PBOC itself ended the year unusually optimistic given all circumstances.

On December 30, the PBOC announced it would completely forgo reverse repo operations for the first time in six months – going back to before all this open unpleasantness. If the trick was designed to instill confidence, it worked:

“Compared with previous years, interbank liquidity isn’t tightening much this time,” said Wan Zhao, a Shanghai-based analyst at China Merchants Bank Co. “We also don’t rule out the possibility of a reserve-requirement-ratio cut. If the central bank is preparing that, then reverse repos aren’t necessary.”

The problem with confidence is that it isn’t worth anything tangible; liquidity being what it is, confidence can only be helpful where there is reasonable expectation for completion in the most positive sense. Nobody watching China, let alone in China, could have possibly had that impression except those closest to the central bank (above) – particularly when all the PBOC had (has) left are the same means as had utterly failed consistently so far.

Reverse repos, as it turns out, were almost immediately deemed “necessary” and in gigantic amounts:

This would be the biggest daily injection since February 2013.

Those totals do not include RMB190 billion in maturing issues, leaving a net of about RMB250 billion compared to a net RMB 315 billion the week before. However, the PBOC also conducted another RMB 260 billion 28-day reverses and RMB 80 billion in 7-day operations today. The net for this week amounts to about RMB 600 billion (considering maturities). In essence, the PBOC has opted to synthetically shut down the banking system in China, as if the New Year holiday were to be started early and on central bank time. That provides us with the first clue as to the nature of what is taking place globally connected to China via “dollars” – if you have to shut down your banking, you are several steps beyond the ordinary.

There is usually symmetry to the policy and the effort’s end; the more you do to tamp down current disorder, the more trouble you make for yourself when these liquidity measures start to expire. It is a leveraging effect that oil as well as CNY displayed once July and August’s litter of derivatives hit Chinese liquidity like a freight train in early November. 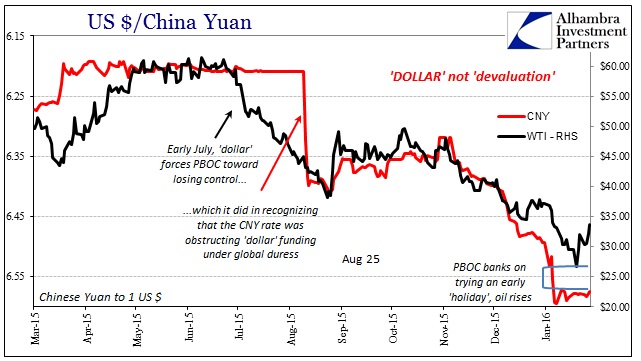 To my view, that explains oil prices recently far more than OPEC – which is constructive as to what ails the global economy, US included. As noted at the outset, the physical, fundamental picture for the oil imbalance has taken a worsened turn again. Inventory shot up to just about 495 million barrels in the week of January 22, a record high surpassing the previous of 490 million barrels back in April last year. 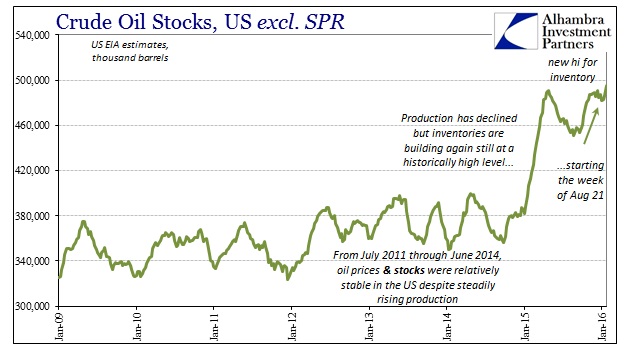 Production in crude has been still predictable, with the level of production since last summer prevailing in very steady fashion. Thus, like when production was steadily rising, futures prices for the oil curve have not been surprised or overwhelmed on the supply side as is commonly cited by the wishful media. 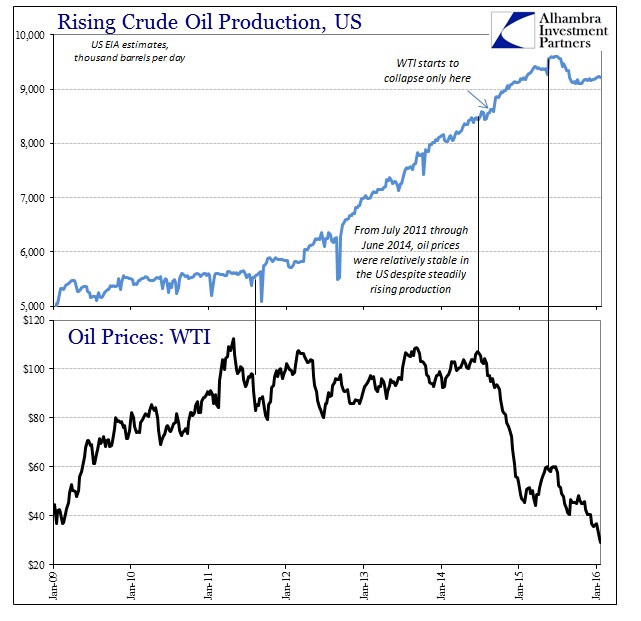 This is not to say that there is an “over” supply of crude, only that the arrival of price imbalance was determined in size and intensity by financing (“dollar”) conditions predicting the level of “surprising” demand. The scale of the oil collapse itself confirms as much, as oil is off more than 70% from the middle of 2014. The only other periods that suggest even remotely the same kinds of imbalance acting through oil are global recessions: 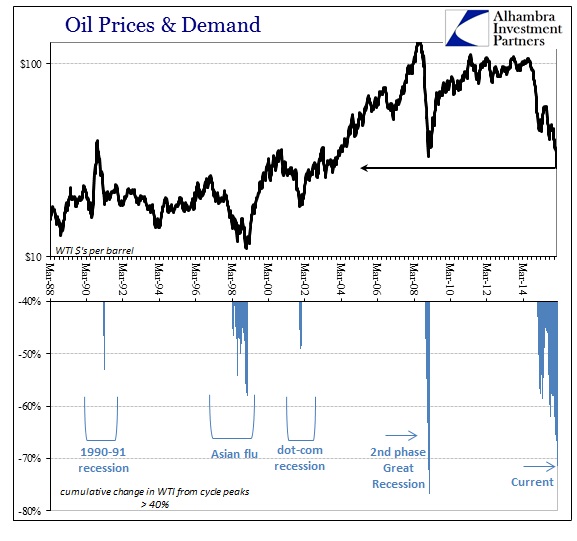 That verdict in both oil and “dollar” were rendered a long time ago, promptly dismissed by those suggesting only “transitory” or purely a “supply glut.” In the time since those dismissals, the world has only become more and more like what oil and the “dollar” were predicting; and not anything like what economists were demanding. The problem for even the immediate future is that the current economic setting still hasn’t caught up to the projection of oil and “dollar”; that includes the likely temporary reprieve the PBOC “purchased” with its massive and fleeting injections.

I think that is why the junk bond market is important as a corroborative indication of this kind of potential economic worst case (or just downside case). Defaults there are still historically low right now, but prices are starting to reflect more toward the historically high side for some point in the future. While a great deal of that, should it (likely) occur, is energy-related junk, more and more junk depression is beyond energy into the real economy in broad fashion.

Reverse repos are temporary measures that only set up for more leveraged failure when they come due; the same perfect storm as we have observed already a few times in the past year. If it were all limited to financial prices and indications, then perhaps a financial effort might be enough to take better shape (even then a long shot). What fundamental oil and further economic data confirms, however, it’s not just that the baseline of economic expectations continues to pull downward but that the full probability spectrum of that downward shift is already really downward.