Fourth quarter GDP was estimate at just +0.68906% Q/Q in its advance statement. There is no more “residual seasonality” left with which to obfuscate the deficiency in 2015; the year ended as it had begun, under great suspicion. Unlike most economic context given as commentary, that actually makes sense as both markets and other more fruitful economic measures have been suggesting all along. At best, GDP has exhibited great instability which is itself an indication of weakness since GDP was constructed to be the most charitable interpretation of economic growth.

Instead of riding into the sunset of QE-inspired success, the economy last year decelerated and left only questions as to exactly that. The year saw only one quarter that could be in any way characterized as decent, leaving three as undesirable; two unconscionably close to zero. 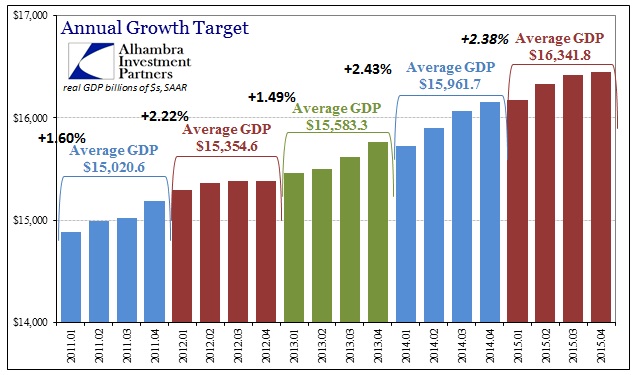 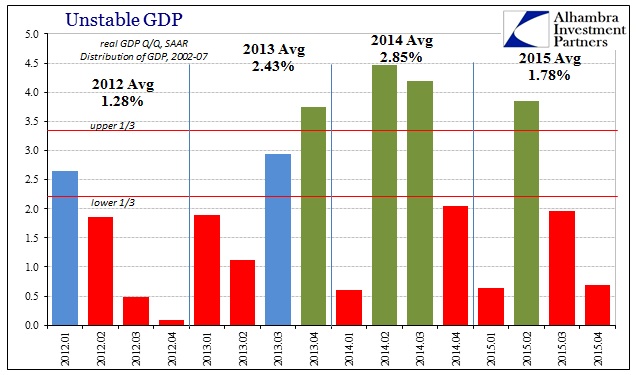 By the standard of average SAAR’s, GDP in 2015 was +2.38%, slightly less than 2014’s 2.43%. In terms of average Q/Q, 2015 was appreciably worse at just 1.78%; not really meaningfully better than even 2012 and certainly nowhere near projecting “overheating.” In fact, by comparison to the last “recovery” after the dot-com recession, 2015 seriously underperforms 2006 (a year that included half of it on the wrong side of the housing bubble). 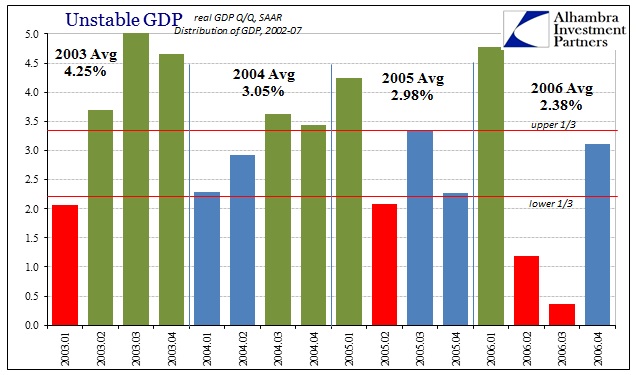 That left the FOMC little choice but to make the alteration to its statement language in January, being forced into acknowledgement that GDP was no longer confirming their view. That leaves the FOMC’s recovery as purely the imagination of the BLS and its hopelessly isolated unemployment rate. The GDP report provided only contradiction for the “inflation” reality in 2015, too. If the Fed meant that calculated inflation rates would at least begin to respond to past monetary policy efforts bearing fruit in the actual economy, then the fact that nominal GDP failed to reach the 2% threshold twice in 2015 has to be a fatal blow to any designs about “slack” being sufficiently addressed. Again: Nominal GDP failed to reach 2% half of the year, including the last three months. 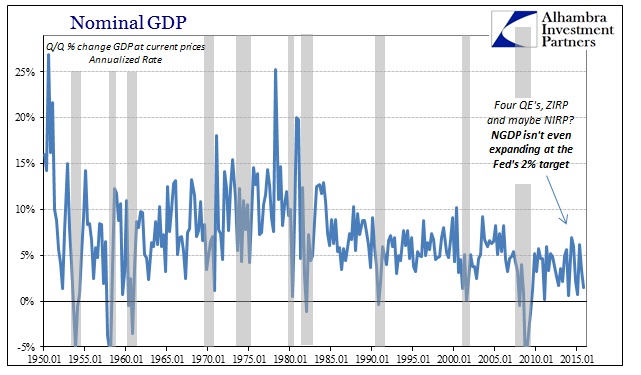 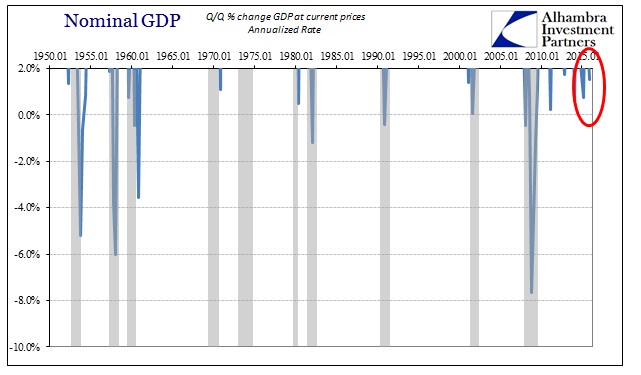 Whether or not that played a role in the FOMC’s decision to amend its Strategy Statement is unclear, though you have to believe that it was at least some part of the urge to do so. Nominal GDP is an important indication for monetarists, and if nominal GDP can be so dangerously lackluster after four QE’s, seven years of ZIRP and endless prodding about the “printing press”, balance sheet expansion, and “professional forecasters” providing a long run anchor, then there are serious monetary and economic deficiencies being exhibited during the same year it was all supposed to finally come together.

The problem is that the longer we wait to force the central bank out of the equation, the greater the economic cost. As noted of the Bank of Japan’s utter lunacy today, monetary interference induces real costs to the economy that economists have decided are worth (someone else) bearing if only for a time so that we all might enjoy a full recovery at some point. The GDP indications for 2015 suggest that “some point” is nowhere near; the monetary policy interjection is therefore still at the “cost” stage going on its eighth year. We can estimate that by comparing what GDP might be had it QE actually worked as intended and when intended (and I am being further generous by starting at QE2 rather than QE1). 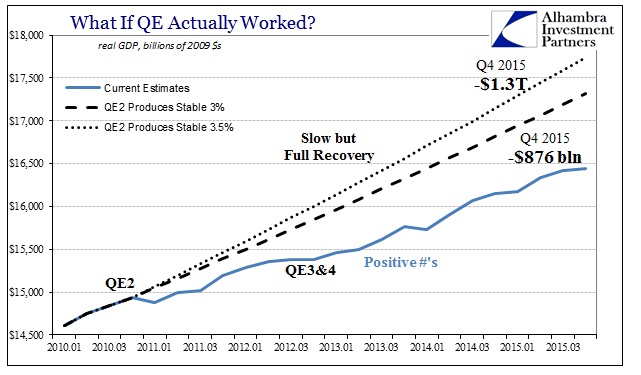 Three percent growth is actually at the lower end of any expected range, therefore accounting for any residual unevenness that might have still been lingering after the Great Recession. Instead, however, the track of GDP remains far below even that minimal standard. Economists proclaim that as if the economy needs to bear still more redistributionary costs for the same kind of future tense possibility of success – but when? At already nearly a decade, that continued belief stretches all boundaries of any sense. If it hasn’t happened yet, what are the chances it will in 2016? More importantly, why should we believe 2016 will be different after so much certainty wasted on 2015?

At some point, it should become amply clear to all but the religiously devoted that none of this monetary policy worked or will work. Enough time has passed; the sample size more than sufficient. I think that is why central banks are, right now, in the process of appearing to change yet again in their manner. QE didn’t work; try NIRP. For the ECB; NIRP didn’t work, try QE. For the Bank of Japan; how about a gargantuan dose of both at the same time?

GDP was the best shot for Janet Yellen to try to convince anyone that the Fed has it even slightly correct. It is, again, the most highly accommodating economic statistic toward presenting growth and it utterly failed in 2015. If LBJ gave up on Vietnam supposedly because he “lost” Walter Cronkite, might we see something similar here? In other words, if you can’t even get GDP on your side, then you’ve lost. Market prices start to make a lot more sense under that heading.