FOMC Voting Member Esther George issued a vote of confidence for the economy, despite financial turmoil returning across asset markets again today. With front month WTI back under $30, her idea of a strong economy and anchored inflation expectations is still highly imperiled. She remains completely dogged, however, undeterred for further “normalization” of monetary policy largely as the US economy is doing, by her estimation, really well:

“The fundamentals of the U.S. economy currently appear strong enough to sustain positive growth going forward,” George said in a speech to a business group in Kansas City, Missouri.

The brief article that appeared on her speech did not devote enough about the details for these “fundamentals”, but we can easily guess that they leaned heavily on the words “job growth” and “unemployment rate.” It matters little that neither of those terms prevented the current state of “financial turmoil” nor that such disorder itself is indicative of worsening fundamental states ahead, to economists the BLS’s imputations and trend-cycle optimism are all that counts for economic interpretation.

That was, of course, the same position she took in March of last year, as economists are quite consistent no matter how little the unemployment rate appears to matter for lengthy stretches of only further deterioration.

The U.S. economy is expanding at an above-trend growth rate, which I expect to continue through the end of the year. A strong dollar and certain aspects of the foreign outlook pose some risks, but the economy appears well positioned to withstand such headwinds…

Importantly, this improved outlook for consumers and businesses suggests that momentum in the labor market will likely continue going forward. The economy added more than 3 million jobs in 2014, the highest level since 1999, and the rapid pace of job creation has continued into the beginning of 2015.

Along with this strong employment growth, we’ve seen significant improvement in the unemployment rate, which has fallen from 6.7 percent in December 2013 to 5.7 percent in January of this year. The current level is less than one-half percentage point away from what many view as the long-run normal rate.

As usual, labor market growth at least in terms of the numbers the BLS presents as an accurate picture of the labor market (regardless if it is ever corroborated by actual wages and spending) meant to George the coming of fruitful inflation:

The strength in the labor market I just mentioned is also likely to lead to more rapid wage gains. So while inflation is somewhat below the Fed’s 2 percent goal, I am not overly concerned with this shortfall. Instead, I see current and forecasted inflation as generally consistent with price stability.

As noted earlier today, inflation remains 44 consecutive months below the Fed’s target for “price stability.” With financial turmoil once more being exhibited, we can only assume that it will remain in that condition for a good while longer – which is pretty much the point to begin with. Regardless of all that, she expects that the labor statistics will matter someday soon even if it hasn’t so far (unmentioned). As she said today in her latest speech, George anticipates only more “rate hikes” in the near future.

“My view is that the committee should continue the gradual adjustment of moving rates higher,” Kansas City Fed Bank President Esther George, who has a vote this year on the U.S. central bank’s rate-setting committee, said in prepared remarks.

The idea of rate hike must mean something different to the monetary policy apparatus as it does in the rest of the world. The FOMC is, of course, familiar with this problem as Alan Greenspan made its ignorance plain by focusing on the “conundrum” of overall markets thinking not to obey his command. This time, however, the divergence is far more severe and much quicker about it.

The Fed raised rates in federal funds but everywhere else curves continue to collapse. Eurodollar markets today were unenthused by George’s fundamental observations, with the curve now the equivalent of more than four rate “cuts” just since last July when all this really got rolling . The interpretation of that is nothing good for the economy, here and elsewhere, for this year and beyond. It needs to be pointed out, also, that the collapsing eurodollar curve (and other curves of raging RHINO) has been proven correct so far; the oral and written flagellations of economists have been nothing but surprised by all of this.

Last year was nothing like what it was supposed to have been, leaving this year with recession far more a part of the discussion than the scheduled parade. Worse, continued deterioration in these markets here (subscription required) even absent visible China is a concerning sign that offers nothing like what Esther George proposes in either financial or economic terms. 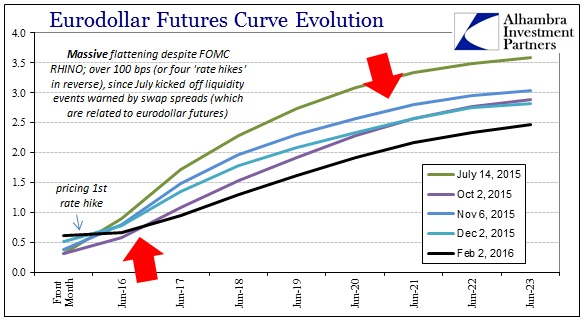 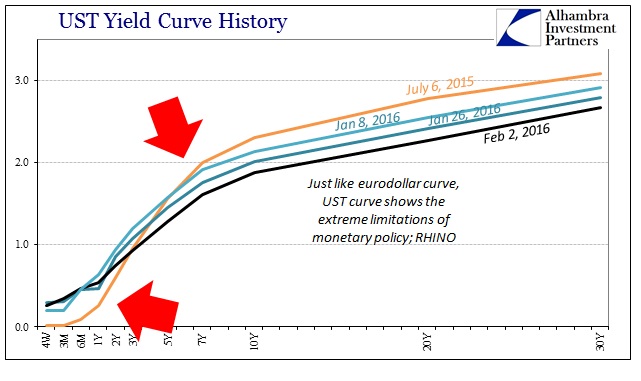