You simply cannot act as a money dealer when the money you are dealing is highly suspect. I am not writing about money in the true sense, such as any tangible form that falls under property laws of custody and bailment, but rather the wholesale “money” that is derived under the much looser and unconstrained terms of financial laws and more so convention. This was another of the great lessons of 2008 that did not stay learned.

Take you pick of narratives, as there was no shortage of representative samples from among the network of dealer behemoths. It isn’t coincidence that the names of those who actually failed (insolvent no matter the cold fusion of liabilities being injected) were those more active in these kinds of matters. For this particular story, I’ll use AIG because it represents perhaps best what works least. To begin with, AIG was supposed to be an insurance company rather than a money dealer.

What felled AIG was not losses; it is never losses. In August 2008, AIG released earnings that included $6.8 billion OTTI charges (other than temporary impairment) that were losses in the accounting sense of securities that were not sold but, as the name implies, weren’t likely to see prior values anytime soon. This was actually the Enron legacy of using market inputs for valuations. AIG had been a big seller of protection on LSS structures, perhaps the biggest, though we will never be sure. LSS meant “leveraged super senior” tranches of securitizations, which were, essentially, the leftovers after wholesaling out all the mezzanines. There was very little default risk in these pieces because the “thickness” of the structures above it was sufficient that it would take literal (not financial) catastrophe in order for defaults to penetrate that far (and, as fanciful as it sounds, this was actually correct; no senior or super senior piece that I am aware of ever felt a money loss from default; it was all pricing and liquidity).

The fact that there was such high demand for “hedging” on even LSS tells you all you need to know about math-as-money. The problem for writers of protection on CDS for LSS was that it wasn’t default that triggered collateral or reassignment of terms. Many (most?) were structured so that a ratings action (downgrade) or even spread levels would be the standard. If you owned protection on any particular prime MBS super senior (which meant you owned maybe 10% of the piece and leveraged the rest with commercial paper) and the ABX spread index started to blow out, that might trigger a collateral call on the counterparty that had written the CDS. That feature was meant as protection for both sides – that a collateral call step or two would mitigate any binary option, meaning that spreads rising wouldn’t just trigger an immediate and catastrophic unwinding.

Starting sometime in July 2008 but intensifying through August and into September that year, CDO spreads had initiated $6 billion in collateral calls just on AIG’s super senior protection positions (written). On September 12, 2008, three ratings agencies downgraded AIG based not just on those calls but also on their own modeled effects of where credit spreads were going (and thus the expected necessity of still more collateral posting). Two AIG subs were then shut out of commercial paper, forcing AIG the parent to step in with lending facilities.

That was followed by a run on AIG’s securities lending business (“renting” out securities from AIG’s long portfolios in repo) as counterparties became nervous about parent involvement in growing illiquidity. On September 15, Wall Street executives met to discuss an LTCM-type bailout but no agreement was reached. AIG was then downgraded again, initiating now $20 billion in additional collateral posting. The next day, September 16, AIG was shut out of funding markets even on a secured basis (repo) and counterparties (particularly JP Morgan as triparty repo custodian) began withholding payments.

When the company finally got around to tabulating the losses in early 2009, months after the portfolios were assigned to the Federal Reserve and its Maiden Lane illegalities, of the $64 billion in accounting losses, a good chunk ($24.6 billion) was writedowns of goodwill and tax credits but the largest was due to “market disruption.” Of that, $18.6 billion was due to OTTI charges in the following: $6.7 billion in CDS position charges (CVA’s) due to nothing more than spread widening; $4.7 billion from securities deals terminated without sufficient collateral; $5.2 billion as a mark-to-market loss on super senior CDS transferred to Maiden Lane III, meaning treated as sold at very low value; and $2.3 billion MTM in RMBS, of which two-thirds super senior, transferred to Maiden Lane II.

None of those positions generated a single dollar in actual credit losses or defaults. In fact, Maiden Lane yielded the government, through the Fed, $20 billion in profit; part of the reason Hank Greenberg sued the Fed and obtained a partial victory last year (mostly that the Fed went beyond legal authority in the bailout of AIG and the terms of it).

What that anecdote does is provide a glimpse into the multi-dimensional shit show (pardon my French) that was being visited on all sides of the modern money dealing fiasco as it careened in reverse. There were spreads blowing out, collateral calls, questionable ownership and title if and when bankruptcy, accounting losses that might specify more of the same and all happening at a time when nobody could gain any kind of handle on where to begin. That is the eurodollar/wholesale fabric – it has no beginning and no end; it just is, or, as noted above, is not.

The degenerate free-for-all meant desperate tactics. AIG was a major, major money dealing player in supplying “dark leverage” that allowed far too many banks to stay on the orderly side of the true liquidity question: what makes a bank hold an MBS today but sell it at any price tomorrow? Providing sufficient CDS coverage and risk outlet is at the top of that list; with AIG taken out after the monoline insurers were tapped earlier that year left fewer hedging options for math-as-money.

What do you do if you can no longer access primary hedging tools and vehicles? In the search for alternate sources of counter-trend assets, financial firms, even banks themselves, started shorting bank stocks. It’s not as outlandish as it might sound nor even so much ad hoc – there were solid mathematical correlations (inverse, obviously) between bank stock prices and certain financial spreads.  Ironically, the SEC and government officials had already started to shift blame to “naked speculation”, even going so far as to ban “naked” short selling on July 15, 2008 – right around the time AIG was starting to get collateral calls and was certainly cutting back its dark leverage “supply” to the rest of the financial system.

Obviously, the war on “speculators” and short selling didn’t have any effect because it was in large part financial firms starved of risk mitigation resources that were performing the “nefarious” act. And it was only treated in that fashion and couched in those terms because it is one of the worst elements of the self-reinforcing spiral: spreads blow out, causing collateral calls on resource suppliers (money dealers), reducing resources available to offload systemic risk and stop spreads, meaning only more forced selling leading to more spread blowouts and so on.

The morning of September 18, 2008, the day AIG was in the offices of FRBNY with no other options (it was also just after Lehman, too), the SEC increased its short selling ban beyond the July restrictions. The original order only covered naked selling on the GSE’s and primary dealers (imagine that). This second order was broader but still financial-focused:

Our concerns, however, are no longer limited to just the financial institutions that were the subject of the July Emergency Order. Recent market conditions have made us concerned that short selling in the securities of a wider range of financial institutions may be causing sudden and excessive fluctuations of the prices of such securities in such a manner so as to threaten fair and orderly markets.

The true threat to “fair and orderly markets” was in depending upon dealer networks that were poorly understood and never truly tested. The eurodollar system, in particular, had simply expanded beyond the bounds of good standing and 2008 was its reckoning. The problem was the unpredictable manner of decay, which, as I noted yesterday of a parallel episode through FHLB, works its way through channels you just couldn’t anticipate. In that avenue of destruction, collateral positions were entirely the problem which were so large they infected the entire agency debt system, and thus shut off one huge conduit for funding MBS positions (and other securities if only indirectly) that no one ever thought would ever have been threatened.

During the worst of the panic as counterparty risks only exploded, swap spreads counterintuitively compressed – to the point on October 23, 2008, the 30-year spread was alarmingly negative for the first time ever (in the US). In plain terms, it just doesn’t make sense; in the context of the panic in 2008, doubly so. How could it be that swap rates would be less than similar maturity UST’s, thus indicating the “market” pricing lower counterparty risk than US government default risk during a period when counterparty risk was the highest it has ever been and maybe ever will be? As noted with short selling, in times of great stress such orderly arrangements get thrown out the window in favor of raw survivorship; of individual positions, portfolios or firms. The negative swap spread was and is, in simplest terms, just an indication of the highly unusual nature of the time. 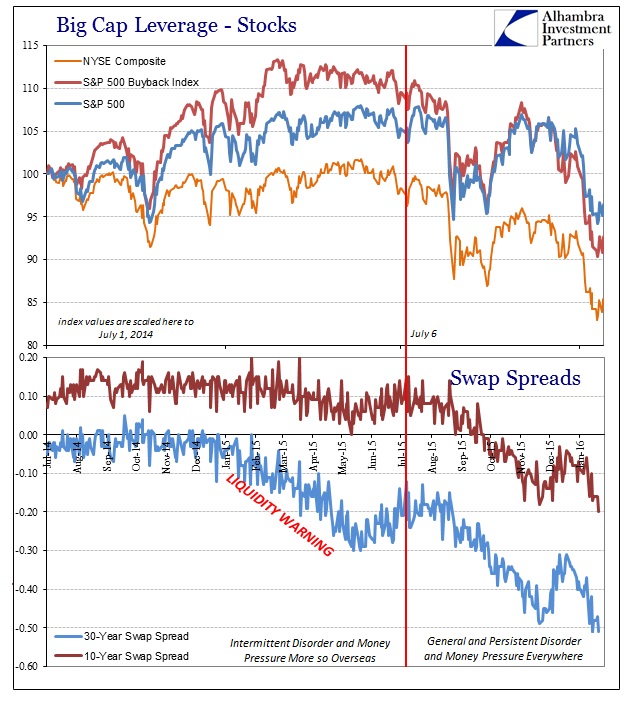 I bring all this up again to heighten awareness of similar types of circumstances now. Obviously, negative swap spreads have been an indication and warning for some time – that balance sheet capacity is greatly impacted and imbalanced. That cannot but lead to spillover effects that will undoubtedly be different than what was experienced in 2008. That doesn’t preclude, however, the possibility of repetition in small ways even in 2016.

Dragged lower by falling interest rates and credit concern, the KBW Bank Index extended its three-day decline to as much as 7.5 percent earlier Wednesday — the fifth time this year a loss has exceeded 5 percent over such a stretch, data compiled by Bloomberg show. At times this week, losses from Bank of America Corp. to Citigroup Inc. have exceeded 10 percent.

Daily drubbings in financials are rapidly supplanting anxiety over oil and its related shares as the equity market’s biggest headache. At 15.7 percent of the Standard & Poor’s 500, banks, brokerages and insurance companies are second only to technology companies as the biggest group and more than twice the size of energy producers.

Let me be clear; I am not claiming that a rerun of 2008 is at hand (indeed, there will never be another 2008), only that these kinds of outlier events are clues to a larger puzzle that remains still veiled by the shroud of the eurodollar and its obvious decline. The comparison to 2008 is useful only in calibrating what is or might be a similar indication of stress, and even then judgment as to magnitude or relevance must be based upon the current context. It is, as with other oddities of this nature, something to watch and incorporate into fruitful analysis as all this “unexpected” turmoil continues to unfold. Liquidity structures are dense and mysterious, no doubt, but not impenetrably so if you look for, and are aware of, potential connections.