EM Corporate Debt Is Not A Local Problem

EM Corporate Debt Is Not A Local Problem

If we have at least a good idea about the gross exposure to US junk if not who ultimately holds and funds it, the emerging markets infiltration is much more difficult to parse. There are only a handful of estimates that appear reliable enough to obtain a decent range estimate. The first comes from the BIS and was written in 2013. At the time, the paper caused some stir as it announced what many had expected mostly about China – it had participated fully in the “dollar” short through several conduits, including the financial sector which was borrowing (through loans and bonds) offshore to fund client activities onshore (in dollars).

Given the ongoing hysteria in Chinese markets vis-à-vis the “dollar”, I tend to believe their estimates were understated to considerable degree. Still, in terms of trying to find exposure among even the general “offshore” suppliers of “dollars” it is a helpful beginning.

As a consequence, a significant share of Chinese corporate debt securities issued in OFCs [offshore financial centers], 16%, is denominated in renminbi. That said, the US dollar remains by far the most important currency of issuance for Chinese firms, accounting for 77% of corporate issuance in OFCs. Again, this could reflect differences in the cost of funding. Dollar-denominated rates are below comparable renminbi rates and many players expect an appreciation of the Chinese currency.

What do Chinese corporations do with the dollars raised by issuing debt securities in OFCs? First, around one third of offshore issuance is by Chinese financial institutions that fund dollar lending in China. Second, nonfinancial issuance could reflect the internationalisation of Chinese firms. Chinese corporations have been purchasing assets around the globe recently, and at least part of these purchases appears to have been financed by borrowing abroad. This could explain the relatively high share of firms in the oil and gas sector in Chinese non-financial corporations’ offshore issuance. In addition, a good part of the firms in the “Other” sector appear to be manufacturers with overseas operations. [emphasis added]

The paper estimated that from July 2012 through June 2013 Chinese firms had issued a bit less than $50 billion in debt securities, gross, of which $20 billion was made up of those “other” firms including financials. About $4 billion of that was denominated in RMB, leaving the rest foreign and mostly US$.

The other large issuer offshore was, of course, Brazil. While Chinese firms had been self-funded onshore (whether or not through financial conduits for “dollars” onshore isn’t clear) prior, Brazilian firms never had the luxury. That means, straight away, the largest pools of offshore EM debt securities are going to be heavily Chinese and Brazilian, with really little else in concentration.

While these offshore bond and securities offerings got (and still receive) most attention, it is still bank funding that dominates the EM financial space. The IMF reported last October the scale of the debt binge that had very heavily favored bank-drawn lending. They had estimated that EM corporate bonds had run up to $3 trillion through 2014, with about $800 billion denominated in dollars, but bank loans to the EM corporate sector had grown to $15 trillion, up from about $10 trillion in 2009 and just $3 trillion in 2003. Wholesale finance always has to find volume somewhere; the corporate bond bubble is global. 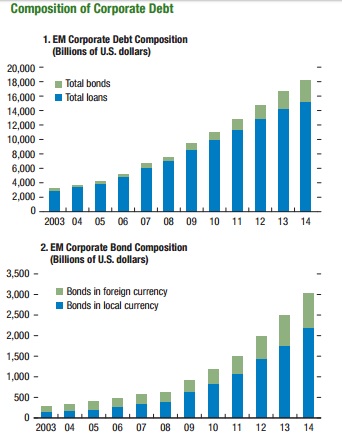 Again, that is just corporate debt and takes no account of still more massive government debt of China, Brazil, Argentina or elsewhere. While the IMF estimates that just 6% of the EM loans were directly originated with foreign bank counterparties, that leaves unsolved the financial connections (contagion) between eurodollar banks and local EM banks lending to these corporate obligors and bond issuers. 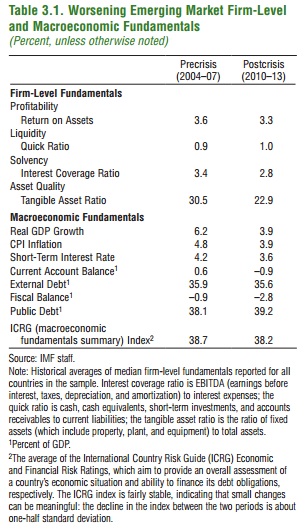 The overall lending quality, as you would expect under what are really bubble trends, has only deteriorated. The IMF arrives at that conclusion across several measurable corporate metrics (shown above), which is nothing more than further confirmation that the same kinds of lunacy that marked lending “standards” in US junk was copied to the EM space. Thus, by the same comparison, we should suspect that EM corporates will be more highly reactive to negative factors (as they likely already have) on the way down just as US corporate junk has behaved.

The real problem is that none of these estimates count the financial exposure angle. All of those figures from the IMF paper only examine the direct links between lender and borrower, from bond obligor to bond purchaser, without estimating how much leverage (“dollar” and otherwise) has been built through wholesale channels to fund it all. We know it is there and know it without fail – there was no local currency explosion in EM’s other than China (and even then the Chinese RMB increase had a direct link to the “dollar’s” increasing intrusions), that would account for such a huge explosion in EM bank lending.

In other words, local EM banks were not sourcing local deposits to fund massive expansion on this scale – there is wholesale “resources” at the center of all this and that means the majority eurodollar.

The BIS and IMF papers give us at least one part of the three part equation – an estimate for the size at the end of the process, the debt that was created. Left to figure is the eurodollar backing in quantity and really format, and then who, exactly, were those backers. In September last year, the IMF issued a warning about EM corporates and the potential feedbacks through the financial sector, but it was far too nonspecific.

Further complicating emerging market problems, the changing structure of financial markets leaves many developing economies exposed to major outflows of capital as investors scramble to exit. That can lead to fire sales and a breakdown in markets.

Such warning was perhaps a bit too late, as China and Brazil in particular have already suffered just those kinds of “runs.” What we need to explore, somehow, is the manner in which they form and propagate outside of local EM terms. In other words, “breakdown in markets” is not limited to currency “flight” but rather, as I think we have seen much of already, total monetary withdrawal – systemic eurodollar declines. In fact, I think it evident by currency (including the yen; Japanese banks supplying eurodollar resources to Chinese corporates and financials) and by wholesale dynamics we have already seen all of that, meaning what we are really after is how far it could really run.

The word, again, is contagion. Specific banks may not be directly exposed to this EM corporate mess, which is all the more messy via these currency channels, but they have links indirectly through wholesale and eurodollar functions to the banks that are. As it is, at least one fallacy has been exposed, as going back to the Asian flu of 1997 and 1998 significant piles of “reserves” were supposed to have been insurance against just these exact circumstances – that when the “dollar” market recedes, the local central bank could easily fill the void, or at least easily influence others (eurodollar banks) to do it for them. Not even China, with the supposed largest stockpile of reserves ever imagined, has been able to perform close to that.

It’s really this “other” side that matters the most. EM’s will take losses and the local economies will be devastated, but if this were all just limited in that distinct process it would be of no greater concern beyond those specifically affected (and I don’t mean to callously disregard such negative outcomes). The fact of even great indirect exposure through eurodollar channels only means that the eurodollar problem can only get worse, exacerbating the local problems into even worse offshore funding, and so on and so on. This was the exact scenario the Fed’s Open Market Manager Charles Coombs laid out in 1969, and then FRBNY warned a decade later. April 1969:

The situation could be particularly serious because the Euro-dollar market had become an increasingly important source of financing for industrial and commercial enterprises not only in Europe but in the whole world. One bankruptcy could attract a lot of attention, and if it led the European commercial banks that had been supplying funds to the market to reassess the credit risks they faced, the result might be a sudden scramble for liquidity. The chances of such a development were enhanced by the fact that no central bank had formal responsibility for the behavior of the Euro-dollar market; what had been accomplished in that connection had been done through informal central bank cooperation.

Again, I think we have seen all that already even though still absent any bankruptcies, local or offshore. That would speak to the very fragile nature of wholesale leverage, that pure volatility alone could spark such massive and global upheaval without yet any of the actual defaults or losses that most economists and even financial agents model for predicting significant inflections (which is why they are always late to the crash). It is never losses. This is the exact nature of these cycles or waves (or runs; whatever you want to call them) that have only expanded each time because they do promulgate in almost concentric fashion, perhaps broken only temporarily each time by central bank’s acting locally in a manner that only makes it worse the “next” time.

Without breaking the volatility cycle there is no way to end the transition, like a fuse already lit. What the estimates for at least the one part of the three factors provide is further confirmation of sufficient size as to be a systemic concern – not that anyone couldn’t tell that by the events of the past year and a half. I think currency behavior over that period confirms the second part, while bank stock and really credit (derivatives) prices more recently begins to answer the third.