Never A Good Sign When Central Banks Feel the Need

Never A Good Sign When Central Banks Feel the Need

You can’t blame the PBOC for trying, as if they were even going to do it, Monday was the day. With the US closed and after the turmoil all over the “dollar” up to last Thursday, the Chinese central bank was left with practically no choice. With Hong Kong shaping up to the mess in the eurodollar, there wasn’t any surprise over the weekend. As I wrote Friday in anticipation (subscription required):

With volume in Hong Kong heavy and losses severe in many places, there isn’t a lot to suggest a durable turnaround in stocks, banking or currencies. The mess of imbalance survives in Hong Kong, meaning that it will likely continue to afflict the mainland only further eroding sentiment all the way around. It will be interesting how the PBOC reacts, as surely they will and must.

And they did, fixing the CNY all the way up to 6.50. It was unusually welcome news to a mainstream view that is more often predicated on “devaluation” as some sort of miracle solution. In other words, even the mainstream is starting to notice the correlation between the CNY’s regular and serious downdrafts and the liquidations that suddenly appear everywhere else in tandem. Even if you have no idea how or why that might be, just blind observation suggests the relationship.

The problem of “how” becomes the issue going forward, and maybe even not too far into the future. While it was somewhat gutsy the size of the move on Monday, today open business across the eurodollar left the CNY fix already pushed lower to 6.518 (middle rate) with a selling rate as low as 6.531 (according China Merchant’s Bank). In short, the one-day window to rush to 6.50 seemingly worked in instilling enough confidence for a short-term rebound (perhaps just aiding the rebound that had started Friday), but already the conditions for its end are apparent across a wide selection of indications – starting with both China and the US internals (subscription required) beyond just the stubborn economic decay. 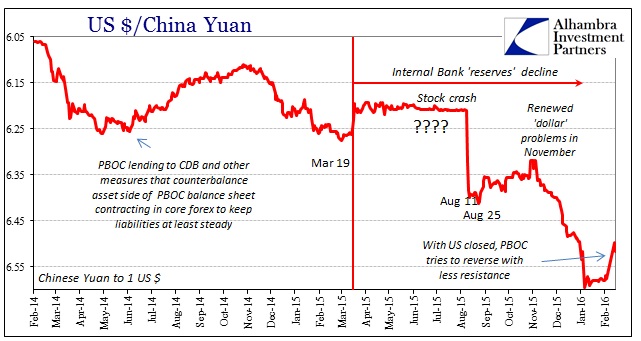 Central banks are trying to command the tides over which they have no authority or even influence. That correlation, too, is becoming increasingly apparent without comment or debate. Uncertainty or even fear is related to the unwinding of the central premise driving markets these past few years – that central banks can and will banish all tail risk. With the PBOC in particular caught up in its own “tail risk”, that fundamental interpretation must instead yield to the real fundamentals in the economic direction.

Since August 17, 2007, a span of 3,100 days, nearly eight and a half years, nothing the Fed (or any other central bank) has done has worked. It’s not that the monetary policies have not worked well; it is that they haven’t worked at all and are actually quite harmful. It may be harder to distinguish that latter charge in the US as compared to the easy visibility of QE’s destruction upon, say, Japan (bank reserves under QQE +338.5%; real household income -7.1%), but that point has been rounding into visible shape throughout the latter half of 2015 and still more in early 2016. It’s exactly why suddenly everyone, including Janet Yellen and all her cohort, is very, very nervous to say the least.

With the gathering storm threatening yet again, we are supposed to believe that central bankers have the answers now in a way that they haven’t through all of those prior 3,100 days? Negative nominal interest rates are different than QE in only one word; “nominal.” The central point of QE was to reduce “real” interest rates via again inflation expectations so that they would be negative; instead, inflation expectations in the US, as everywhere else, are now as low as they had been in the worst days of the Great Recession.

Any reasonable human, requiring at most less than reasonable intelligence, would examine this litany of only failure and conclude that they really don’t know what they are doing. It is utterly and painfully obvious. The whole theory is rotten, top to bottom, yet they persist at it worse and worse no matter the outcome. Monetary officials have no idea how the monetary system actually works, a proven indictment by their own hand, so how are they supposed to use “monetary” policy to control the economy in just such a way that would be successfully different than all prior efforts at controlling the economy?

It’s night and day from the early days of QE3, even for stocks. The euphoria over Japan’s NIRP now forgotten might give us some insight into how little the current rebound might last. Even oil didn’t make it through the day, finishing around $29 after being as high as $31 earlier in trading.

The very fact that the PBOC felt it necessary (and it may have been actually necessary given last week) to intrude so heavily is indeed a worrisome signal all its own. China’s central bank has become entirely reactive during this “rising dollar” period so we can infer from the degree of its moves the concern on its part for disorderly imbalance. Thus, a heavy hand from 6.58 to 6.50 in CNY is already a negative indication, one that we have seen before (notably September and especially late October prior to the last “devaluation”).

As much as credit and funding markets have been moving steadily in that direction for almost the whole time since then, the degree of curve collapse just recently is still astounding to the point of being almost unbelievable; suggesting that even “dollar” market participants, bearish all along, still underestimated this difference between central banks once being taken as nearly omniscient and the coming widespread appreciation that they are irrelevant and even unsafe. We have been cursed to live in such interesting times, with the most important variable seemingly to determine how much farther along the Japanese path we follow.