I wrote last week about the OECD’s sudden alarm over global growth “flatlining” but I think it important and relevant to further emphasize why. If you go back only to June last year, their economic outlook for the world sounds distinctly familiar.

The OECD has cut its global economic growth forecast for this year but says it expects lower oil prices to ensure a gradual recovery, even if weak investment remains a worry.

Growth is also being buoyed by ultra-supportive central bank policy in the big developed economies and in many places outside the United States by a stronger dollar, which makes the exports of other currency zones relatively cheaper.

Only months later, curiously none of that assessment remains:

The OECD poured cold water on any lingering hopes of a pick-up in global economic growth this year on Thursday, slashing its forecasts for the United States, Europe and Brazil and urging world leaders to act collectively to strengthen demand.

What I think is most fundamental is their shift in how they view the dollar, including oil somehow becoming a “headwind” after being figured as more than a mild “tailwind” not all that long ago. Last June, they suggested the “stronger dollar” would actually help export growth in especially the more worrisome locations, particularly EM’s. Now, not so much:

Across the Atlantic, U.S. growth slowed in the second half of last year under the weight of a stronger dollar which dragged on exports, and the impact of lower oil prices on the country’s large oil and gas industry.

Among the largest emerging economies, Brazil was seen as a major victims of falling commodity prices, with a recession expected to be deeper than feared at -4.0 percent this year.

It’s fair to suggest, as with all orthodox economists and their outfits, that the OECD doesn’t really understand the mechanics of the dollar; at all. Nowhere is that more evident than Brazil. In its November 2013 projections, the OECD expected 2.5% real GDP growth for Brazil in CY 2015. As late as November 2014, with Brazil already showing very desperate signs in especially “dollar” financing and the related economic segments, they still suggested 2015 growth at 1.5%. Neither of those growth projections would be confused with strong or robust, especially for an EM like Brazil, but they weren’t disastrous, either. Calamity, however, is all Brazil has seen which was and should have been entirely predictable had the OECD understood “dollar” implications. 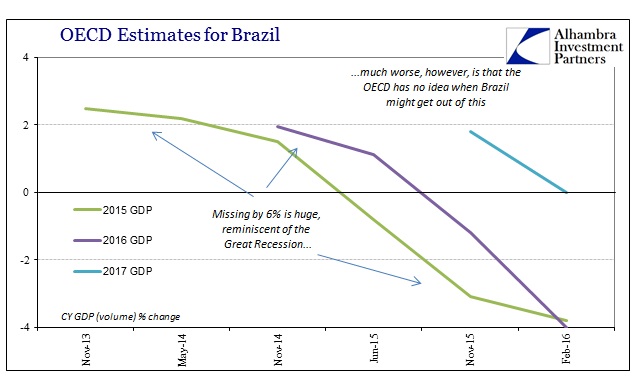 They now expect that Brazil’s GDP last year contracted by an enormous 4%; worse (far worse) the OECD now predicts 2016 GDP will contract by slightly more (and we have almost a whole year remaining of potentially further downgrades) and that with 2017 GDP anticipated at now 0.0% the OECD is essentially admitting that they don’t really know when Brazil will get out of this depression.

A recession is something that comes along to temporarily knock any economy from its long-run path or potential. The Great Recession was a severe deviation (for reference, CY 2009 GDP was only -0.24% in Brazil) for every economy on earth but this is something altogether different and terrifying. Not only is it expected (by orthodox models, no less) that Brazil will be the “dollar” recipient of back-to-back 4% contractions, there is no discernable time table for recovery, therefore suggesting a massive dislocation lasting years.

The relevance of Brazil relates to the orthodox mangling of what the “dollar” truly represents, and further how that damage manifests (and how far it might). To be clear, I’m not suggesting the world will all follow as far as Brazil has and might still in the near future, only that there are some very realistic and very negative scenarios that should be accounted for in analyzing the potential future economic track anywhere the “dollar” is upsetting conditions. I think in many cases, at least some very important “dollar” and “dollar”-related markets, there is already thinking in that direction for much more than EM’s.

That depression potential again extends as much from the sustained decline as its ultimate degree. Without the “dollar” these financialized economies have no support and thus the artificial nature of the past two decades or so is being revealed in a decidedly weak economic foundation. In many ways, an extended contraction is much, much worse than even a violently sharp but temporary recession. While I believe fully that the global economy’s permanent alteration and predicament traces back to the events of the eurodollar panic and Great Recession, there was at least some reasonable hope in 2009 for symmetry. Just the potential for sharp recovery makes a big difference, especially in financial factors that can become only disastrously self-reinforcing without it. That is Brazil already, and there is a lot it can tell us about both potential “unexpected” weakness and the (sometimes intentional) inability of economists to understand it. 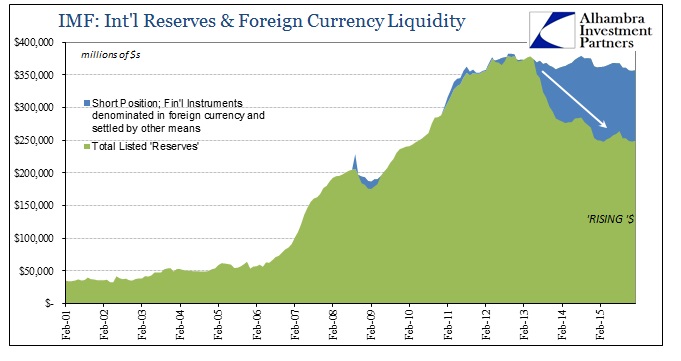 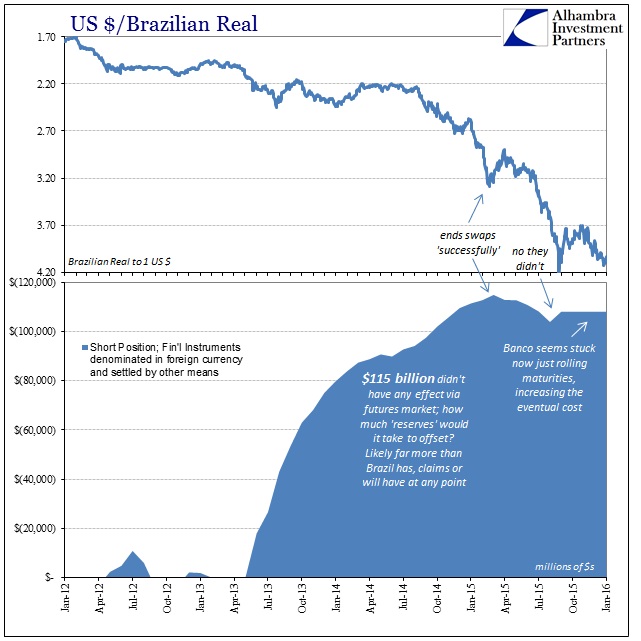