It has become cliché that commentary continues toward the increasingly absurd at the expense of the obvious and all because Janet Yellen says there can’t possibly be anything wrong. The degree to which the broader markets agree in that sense has certainly lessened of late, but that only suggests the increasingly bizarre platitudes offered to do anything other than confirm suspicion. That counts even where, again, there is no doubt that “something” must be way off.

Interbank markets are supposed to be a hierarchy of risk and liquidity preferences. In very basic terms, you would expect to borrow at a lower rate in repo than either federal funds or LIBOR, both of the latter being unsecured unlike the former. If you bring collateral you pay less. Simple; neat; basic sense.

Historically, that has been the interbank hierarchy even under conditions of initial strain or transition. Throughout the rate hikes in the middle of the last decade, that pyramid prevailed. GC rates traded a few bps below (for the most part deviations were intermittent) effective federal funds while 1-month LIBOR was still upward yet (as was all LIBOR splayed out by maturity). Even after the events of August 2007, you would still find repo rates below federal funds and more and more underneath LIBOR. 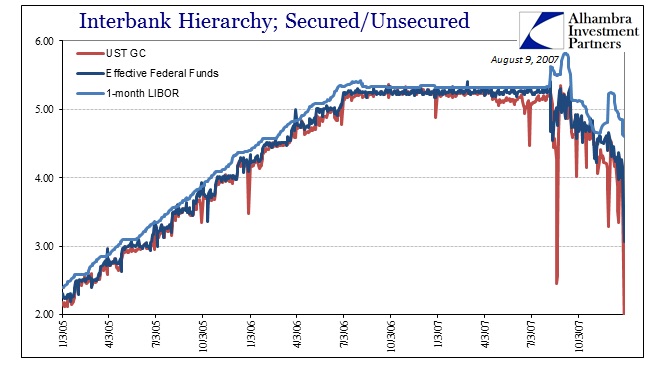 Since December, that hasn’t been the case even intermittently. GC repo rates jumped to near and above the FOMC’s assumed money market “ceiling” and have remained there. Federal funds, the effective average rate, and LIBOR are both now persistently below repo rates. There is no way to suggest that is anything other than strain, fragmentation and/or disorder. 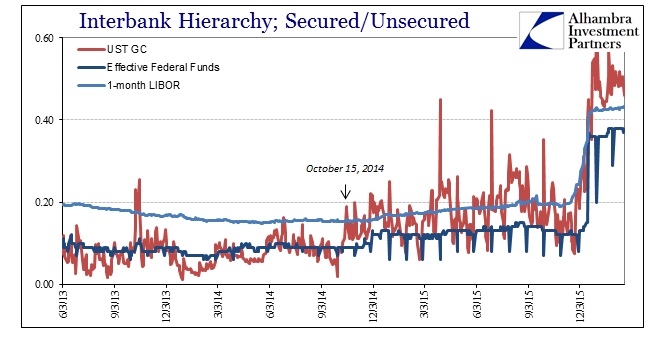 Worse, this shift in hierarchy traces back to a single event that the mainstream has also tried very hard to reduce to nothing – October 15, 2014. Prior to that “run” on UST’s, primarily, a “buying panic” of curiously the primary form of collateral, the familiar interbank format largely remained even at ZIRP. The repo rate would at times move above effective federal funds or even 1-month LIBOR in only the shortest bursts, but for the most part the left side on the chart above was the same as you would find in interbank construction pre-crisis (below). 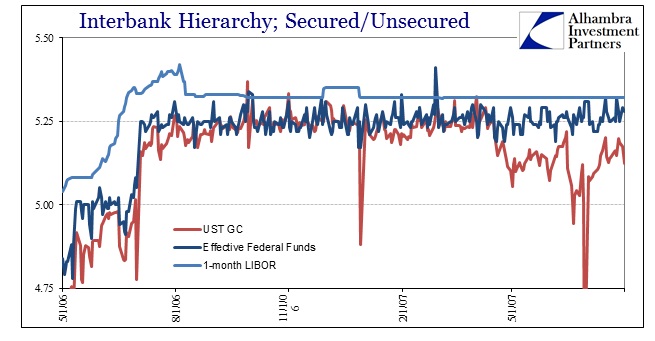 After October 15, 2014, repo rates then began to trade above federal funds as if attracted to 1-month LIBOR instead – not 1-week LIBOR, either, a full month of term lending/borrowing. In fact, in many of the discrete episodes of liquidations (August 2015) or at least broad hints of disorder, repo rates would trade for lingering periods above 1-month LIBOR – and now they do not trade at any time below.

If all is well, there is absolutely no reason for this; none. If a borrower is faced with the choice of borrowing cash overnight collateralized at 50 bps or borrowing for 1-month uncollateralized at 43 bps in eurodollars, he takes the latter every single time – unless he can’t. The only logical conclusion, then, is that there is “something” preventing more than a few borrowers from accessing unsecured at either federal funds or LIBOR, pushing them instead into collateralized terms. That would suggest, strongly, that not only is there little volume unsecured in either there isn’t even any takers to close the negative spread. Why not?

The interbank markets moved more toward featuring primarily secured relationships in the aftermath of August 2007, so what prevails in interbank today still follows that determination. Yet, even that structural shift does not explain the further shift in repo rates upsetting the hierarchy after October 15, 2014, and really more recently. In other words, even though secured funding may still dominate now, prior to October 15, 2014, that was no impediment to preserving “how it should be.”

The increase in repo rates relative to the rest of the unsecured money markets (however they exist now) further suggests not just difficulties in attaining funding relative between collateralized and not, but also perhaps an increasing reluctance even within repo. That is the only way to account for the rate behavior in interbank seen above (coinciding, not coincidentally, again with broad and global liquidations), as under “normal” conditions there should be a flood of arbitrage to push repo rates back down – if nothing else, banks in very good standing (i.e., primary dealers) should be borrowing as much as they possibly can at federal funds or even LIBOR and lending in repo. “Something”, again, is preventing that normalization from occurring which might include a growing hesitancy to both borrow federal funds (lack of volume) and lend repo (uncertainty even with collateral).

This matter is further suggested by still another and very much related dramatic shift in behavior around the end of 2014. The Federal Reserve’s “other” reverse repo program, the existing foreign accommodation, has been quite and conspicuously busy in the past year or so as noted this morning (subscription required). As Jason Fraser of Ceredex Value Advisors pointed out for me, the Wall Street Journal has noticed and struggles to find a benign interpretation for it even after noting how spectacularly the OMO version has failed (without actually admitting it).

In the Fed’s reverse repos, financial institutions temporarily park cash with the central bank in exchange for interest payments and Treasurys as collateral. In foreign repos, account holders’ dollars are swept into an overnight facility paying “a rate of return tied to comparable market-based Treasury repo rates,” the Fed says on its website…

The balances have also risen as use of a domestic overnight reverse repo facility maintained by the New York Fed is waning. Fed officials lifted a $300 billion cap on that program to around $2 trillion in December, but the domestic repo program took in only $35 billion on Tuesday, its lowest level since last April.

The usage out of the foreign “window” hasn’t just been “rising”, it has been surging; last week alone, the total spiked by $12 billion, the highest weekly increase in years. Meanwhile, the RRP OMO has languished at barely any activity at all even though it is supposed to be and have been a potential collateral stream. 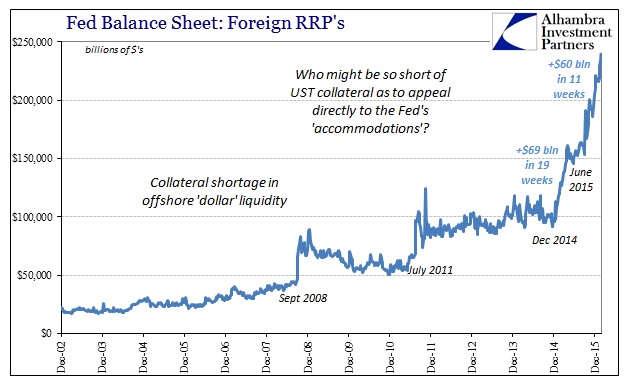 Reading the Journal article, however, you would be forgiven if you finish with the impression that this is only a recent phenomenon, maybe even tied to something like rate hike normalization.

Another attraction of the foreign repos is the interest rate itself, estimated by analysts at around 0.33% to 0.35%. That compares with the Fed’s domestic overnight reverse repos at 0.25% and the 0.26% rate available on one-month Treasury bills.

Recently, yields on ultra-short-dated bills have been climbing, in part because the U.S. Treasury Department has issued more of them. The drop in price has reversed the premium demanded last year when the bills were in tight supply. But the rate on the foreign repo pool remains higher than the rate on one-month bills and the domestic repo program…

Inflows into the foreign repo pool could also be side effect of other levers the Fed is using to control money-market rates, and banks’ changing business preferences in response to regulations.

That certainly makes it sound like foreign central banks are just coolly and deliberately evaluating their menu of short-term dollar options. The world around us, including the repo market in lasting great upset, leaves no such routes. Is it mere coincidence that the Fed’s foreign RRP took to such heavy and unusual (and sustained) usage only weeks after the repo market was hit with a fundamental upset in its longstanding operative conditions in what was a collateral buying frenzy? If you believe Janet Yellen’s version of the world, the one peddled with increasingly emphasized irrationality, then it is all just one mystery of meaningless happenstance and of no more great importance except to banks and central banks that operate esoterically anyway.

It was a difficult sell last year when there wasn’t so much obvious disorder except for “overseas.” It is and was all the more difficult when you easily observe that the foreign RRP “window” gets used so heavily only in periods of such serious global monetary disorder. That would certainly describe the state of the financial world since October 15, 2014, where not only have overseas funding difficulties become domestic, too, but also the degree to which liquidity and funding problems might be contributing to the asset turmoil that even the Fed refers to now. It is as obvious as the swap spread “anomaly”, complete with continued and emphatic denial that the links between these interbank irregularities and the tendencies of global markets to stumble badly are nothing but funny little puzzles to be calmly and routinely sorted out by the “best and brightest” on the road to normalcy.

“Somehow” I doubt it is possible that this is all just one huge, gigantic coincidence and that all these money market indications confirming each other in the same way and at the same exact time is really nothing but run-of-the-mill transitioning. Outside the orthodox bubble there is much that makes sense even to the point of predictability sorely lacking on the inside. 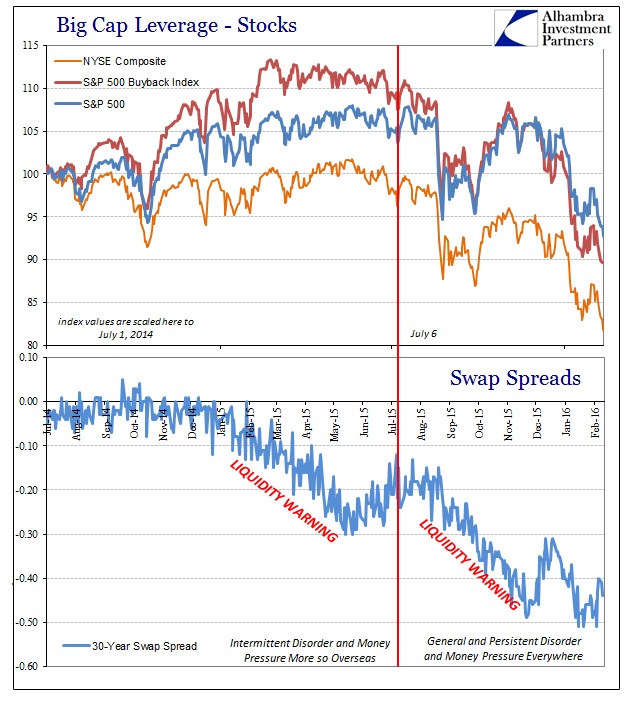