Not Even Secondary Inflation

Not Even Secondary Inflation

At first economists wanted to just ignore oil prices, as they were to be “transitory” or even beneficial to consumers everywhere around the world. The fact that economists would actually admit that low oil prices would be helpful (in a vacuum, they are) showed only the desperation given the seriousness of the “unexpected” surrender. Mainstream monetary theory rejects all falling prices, so to suggest the common sense that lower prices are helpful raises very uncomfortable issues about what monetary policymakers are actually trying to achieve. In other words, economics doesn’t want “helpful”, it wants only what it wants; it must be physically painful for Janet Yellen to even have to suggest that the energy price crash is like stimulus in a way no QE ever achieved.

By the time it dawned on the mainstream that oil prices weren’t actually “transitory” the narrative shifted to “secondary inflation”; or that if monetary policy can’t control or influence commodity prices it still, somehow, doesn’t matter. Effective policy could grasp economic channels beyond oil, and it was there that the mainstream tried to establish a second line of retreat.

The preliminary, national indications Friday for European inflation were at least 0.0% if not worse for February, and this morning’s update for the whole Eurozone kept to that expectation. The official HICP figure was -0.2%, worse than even more pessimistic predictions. That, however, was the least of the concerns as even stripping out the renewed petroleum “deflation” Eurozone inflation on the secondary level is faltering.

Consumer prices in the 19-nation bloc declined to minus 0.2 percent from a positive reading of 0.3 percent in January, according to data published Monday. Core inflation, which strips out volatile elements such as food and energy, was at 0.7 percent, down from 1 percent in the prior month. Those are the worst readings since February and April of last year, respectively…

“Not only headline but also core inflation is much lower than the ECB has been projecting — it is not just energy, it is a wider problem reflecting second round effects and weak demand,” said Nick Kounis, head of macro research at ABN Amro Bank NV in Amsterdam. “This will provide the ECB with an extra push to deliver more aggressive easing than expected at its March meeting.”

After almost a year of PSPP (QE) and fifteen months of CBPP3 (covered bonds) headline inflation is nowhere and has gained nothing, as is now secondary or “second round effects” inflation. The total between the two of those monetary programs is three quarters of a trillion euros and nary a detectible impact from any of it – at least not in the direction it was supposed to influence. Harmful effects, on the other hand, are something the Europeans, as Japanese, might find out in close order. 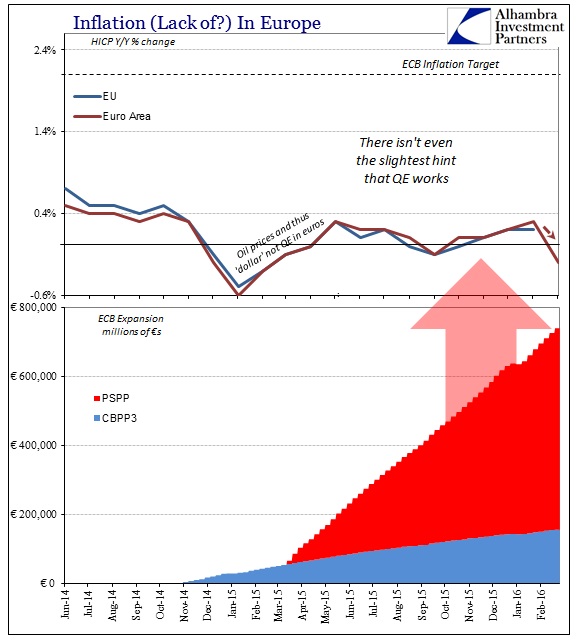 Despite the visible, easily discernable failure on that very account the media is filled with “extra push to deliver more aggressive easing.” This is insanity beyond Einstein’s likely apocryphal statement. “Aggressive easing didn’t work so let’s do more” is irrational to the point of rendering the poor person suggesting it committable to any asylum. The problem is philosophical as well as easily identifiable in the real economy.

It’s not just that “aggressive easing” assumes something that it is not (as noted Friday, there is no “money printing” here or with any central bank), it’s that economics assumes the central bank as some outside influence. The central banker stands apart from the economy and then tries to hammer out some influence, outside in. By that view, nothing the central banker ever does is tied to the lack of success no matter how obvious – if monetary policy didn’t work, then the economy is itself in some depressed state all its own. Under the doctrine of monetary neutrality, the answer for failure can never be monetary policy.

At the very least, monetary policy and orthodox doctrine assumes recessions or contractions of the slightest quantity are never or anywhere helpful to long run efficiency, such as they must be resisted at no matter the cost.

Thus, “aggressive easing” can continue to be an option under orthodox economics no matter how little “aggressive easing” achieves as intended. While economists might find that insulating, the rest of the world, the real economy, is by no means bound to leave such ridiculousness unexamined. Even if we set aside objections over QE and NIRP as actually and actively harmful, the fact that they haven’t even budged calculated inflation suggests there is nothing to be gained by their continued intrusion. We have surpassed enough time so as to preclude the usual mainstream appeal of time lags, especially since the LTRO’s, SMP’s, and OMT’s really place the ECB’s continuous efforts as at least four and a half years. 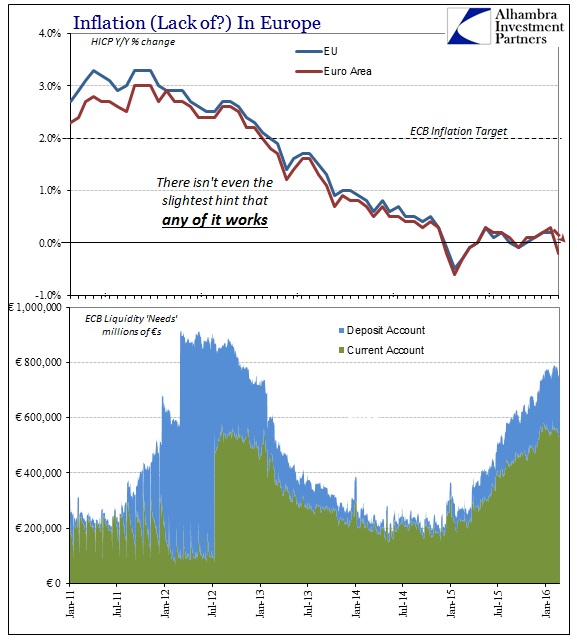 Even on its own terms, monetarism fails, leaving it to fall back upon nothing more than “jobs saved” – in other words, the counterfactual that the real economy would be much worse without it all even though it produces nothing toward visible success. To believe that is to suggest that the real economy is falling in a hole without ever trying to discern the reason for it, or, perhaps more importantly, why this would be the first instance in history that long run growth would be so seriously and persistently depressed all on its own. The most core and basic economic direction is growth, a principle that even economics admits. That leaves an economy without growth for a serious length of time more than just basic economy.

In other words, it takes ridiculous convolution to leave monetary policy neutral, even to suggest central banks can’t do what they claim to be able to do as if it weren’t misguided theory in the first place. It’s far more simple and sensible that the long run economic depression owes to that misbegotten theory at the start constantly intruding in the most “aggressive” fashions. There’s no money in monetary policy to begin with, leaving nothing but mathematical alchemy and sophistry. From that perspective this all makes sense.