A Slowdown That Won’t Stop Slowing Down

A Slowdown That Won’t Stop Slowing Down

China’s official manufacturing PMI slipped to just 49 in February, the worst monthly level since February 2009. It has been below 50 each of the past seven months (and increasingly so during that time) and less than 50.3 since November 2014, an incredible span of 15 straight months. The trend is inarguable, as even economists will now admit Chinese industry stands for pain. Instead, debate has shifted toward the more optimistic “consumer economy” which sounds much less devastating and mystifying.

To that end, there is only further disappointment in February as the non-manufacturing PMI declined to 52.7, also the lowest reading since early 2009 (and equivalent to October 2008 on the way down). While the focus will become the individual reading as it remains above 50, that is, as usual, a misreading of PMI’s; what matters is the trend and, in this case, the non-manufacturing trend in relation to manufacturing. The “services” economy seems very much to follow the manufacturing trend; which only makes sense. 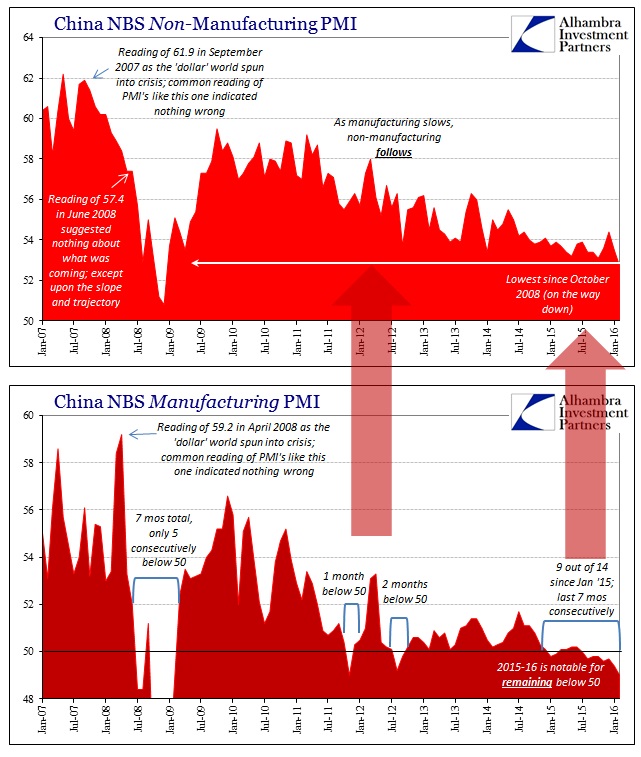 If services were in process of supplanting industry you would expect at least very little correlation if not inverse. Instead, both are clearly moving in the same direction and, quite ominously, on the same general slope (time). Through it all, the idea of “stimulus” survives.

Still, the services gauge slipped to 52.7 in February, from 53.5 in January. Measures of new orders, selling prices, employment, backlogs and inventories were below the 50 dividing line between improving and worsening conditions.

A separate manufacturing reading from Caixin Media and Markit Economics fell to 48 in February, from 48.4 in January.

“Early signs suggest stimulus has yet to gain significant traction, pointing to the need for continued and expanded policy support,” Bloomberg News economists Tom Orlik and Fielding Chen wrote in a note. “In the near term, that likely means the announcement of a larger fiscal deficit target at the National People’s Congress on Saturday, plus stealth moves to guide lending rates lower.”

Stimulus that doesn’t “gain significant traction” axiomatically isn’t stimulus. The passive phrasing also belies the extent, as there has been clearly no traction or effect in any capacity – monetary or fiscal. Tense always matters in these things, as when the PBOC initiates a rate cut (especially the double shots of the deposit rate and reserve requirement) it “will be” a powerful act, but then when the data inevitably disappoints it remains stimulus “yet to gain significant traction.” 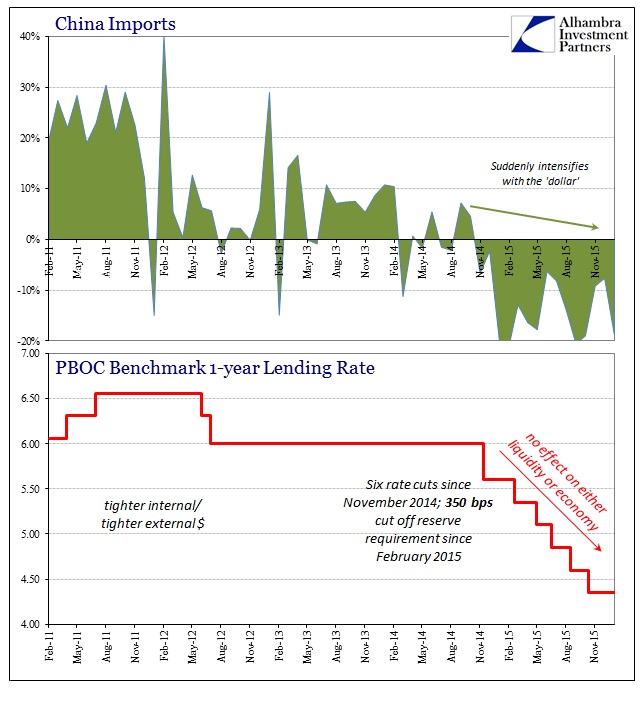 It is a fundamental misconception about the nature of China’s (and the global) economy. That seems to have extended into credit and loan growth as well.

The credit surge “is having an underwhelming impact on the economy,” said Victor Shih, a professor at the University of California at San Diego who studies China’s politics and finance. “The problem may be that investment is increasingly state driven, which only benefits a small handful of state-owned enterprises. The private sector is still suffering from deflationary pressure.”

Not only are credit channels narrowing (conspicuously only toward those conduits where profits and sustainability matter least) I believe what I proposed of TSF and rapid loan growth in January is being confirmed. It wasn’t so much a burst of loans indicating the start of renewal as rather a potentially disastrous preview about what Chinese banks were thinking about the near term – get loan quotas met, stuffing as many months forward, while they still could.

Thus, the fundamental landscape of the Chinese economy isn’t one where industry is being supplanted by services and the consumer, it is likely instead as I suggested yesterday with Brazil and even US manufacturing – a slowdown that just doesn’t stop slowing down. We have never seen anything like this before and it is a global phenomenon. The trajectory is startlingly clear yet because it isn’t the typical, historical recession “V” every little upward variation can be suggested as its end and the start of the recovery; only to find usually a month or two later still more slowing on the same curiously shallow slope. 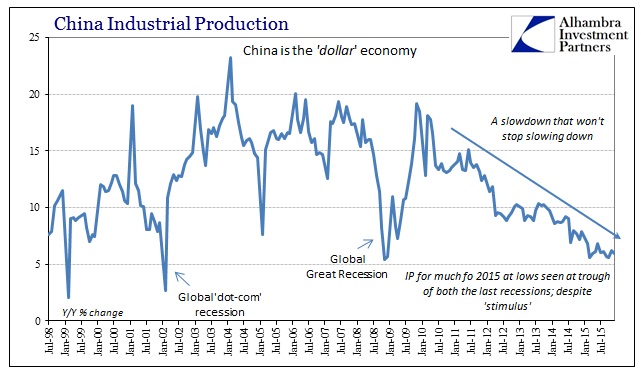 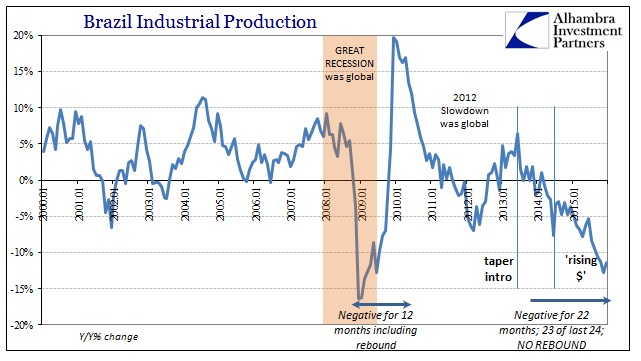 In terms of China’s industry, IP throughout much of 2015 was at growth levels last seen in the depths of either of the prior two global recessions, yet there is still no suggestion of an end to the downslope (just the usual monthly variation) which can be inferred from the PMIs. Instead, industry remains mired and incrementally so month after month. Again, this is something unprecedented and in many ways far worse than the usual recession or cyclical pattern. It is a paradigm shift suggesting the global economy shrunk, a more-than-temporary deviation from what economists and policymakers still hold as potential economic growth. That would be why “stimulus” doesn’t have any effect, in China or anywhere else, as the “rules” of the past no longer apply.

I’m open to any number of interpretations as to cause, especially the surplus of debt the past few decades, but I believe even that is a symptom tracing back to the eurodollar system and its relentless decay. I think more than any other explanation, eurodollar banks consistently withdrawing their financial resources from a financialized global economy would produce something similar in the real economy – a slowdown that just doesn’t stop slowing down no matter what “stimulus.”