Barclays has received all the media attention in the past few days after announcing its exit from Africa. Specifically, the bank intends to divest enough of its 62% stake in the Africa unit so as to skirt tougher UK regulations intended to “ringfence” domestic operations; to keep the global bank from potential global financial horrors recurring and devastating once more the British end.** In this one, specific instance, regulations are playing a large role (requiring all of Barclays Africa liabilities to be placed in ratio calculations with only the pro forma part of the assets) in the bank’s shrinking, but elsewhere we see the same contraction tendencies.

Back in January, Barclays announced it was getting out of Asia, too, selling its wealth management business while cutting 1,200 employees (and as-yet unknown resources) in the investment bank.

Barclays’ retreat from Asia is set to gather pace after it hired Lazard to advise on the planned sale of its wealth management operation in the region that is likely to be valued at more than $500m, according to people familiar with the matter.

The move comes only days after Barclays told staff that it plans to cut up to 1,200 jobs in its investment bank, many of them in Asia, and to close seven offices in the Asia-Pacific region, including in South Korea, Taiwan and Australia.

While that is significant, selling what is still viable, it is more and more common that the “investment bank” is not; those operations apparently hold no value anyone else would want to purchase (or that there isn’t anyone else available to make the purchase of FICC capacity and risk). Other banks are taking the same process with varying degrees of urgency. RBS is one such peer, more aggressively shrinking with less to do with Basel III and UK regulations as the lack of revenue across the formerly bustling investment bank. In recent years, the bank has been pummeled into a shell of its former self.

The bank cut risk-weighted assets by 113 billion pounds to 243 billion pounds, driven by the disposal of its U.S. consumer bank Citizens Financial Group Inc. along with shedding assets at its securities unit and completing the run-down of its bad bank a year ahead of schedule. Operating costs other than litigation and restructuring fell by more than 1 billion pounds and the bank said it aims to shave off another 800 million pounds of expenses in 2016.

RBS is “becoming the bank we said we wanted to be,” generating about 90 percent of revenue in the U.K. and Ireland as it exits operations around the world, McEwan said. The consumer unit sold more mortgages than at any time since 2009, with net new lending totaling 9.3 billion pounds. At the commercial and private banking division, one of the core businesses of the reshaped RBS, total revenue dropped 2.7 percent to 4.27 billion pounds.

The investment bank, becoming a smaller part of the core business as McEwan exits 25 countries around the world and cuts risk-weighted assets, had a “difficult start to the year” and may see some “modest further income erosion” amid difficult trading conditions. The unit reported an operating loss of 245 million pounds in the fourth quarter compared with a loss of 536 million pounds in the same period a year ago as it booked smaller litigation costs. [emphasis added]

RBS’s transition is entirely welcome on its own merits no matter the outcome, but in systemic terms of the eurodollar format it leaves an empty space that is only getting more empty as other banks similarly shrink. If this was 2006 and RBS had run into its own problems leading to investment bank disfavor, there would have been a line at its door to buy up the capacity. Instead, like Barclays, it will sell everything else it can while shutting down the former eurodollar functions and getting smaller overall. At its Q4 2008 report, RBS totaled just over £2.4 trillion in all assets on its balance sheet; the latest annual report for 2015 shows just £815 billion, leaving a bank a third its former size. 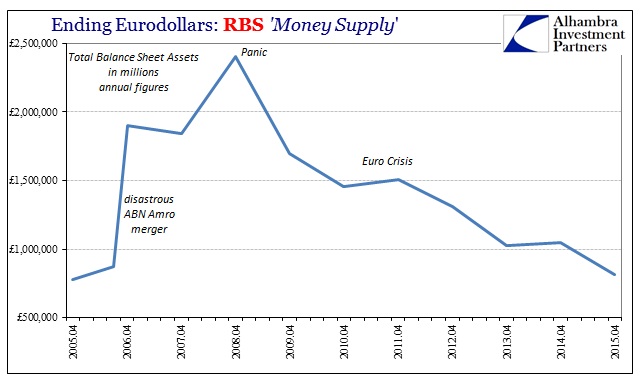 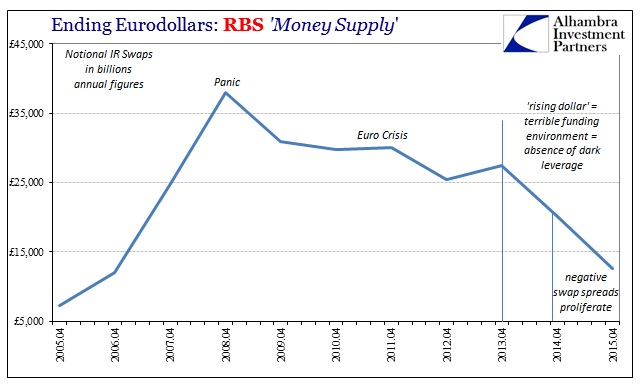 It is repetition that we see across the eurodollar banks, as one by one they have retreated though especially under this “rising dollar” circumstance. Some transitions have been more lumpy and uneven, maybe quite unpredictable, which accounts for varying degrees of global funding stress and even forced liquidations.

Morgan Stanley’s balance sheet, for example, had risen rapidly until Q2 2007; peaking just prior to the events of August 9, 2007, and declining from there. In the fourth quarter of 2008, as the firm “converted” into a depository institution from a statutory commercial bank, total assets plummeted from about $1 trillion to just $676 billion. The bulk of that retreat was specifically wholesale finance as the bank itself reported in its 2008 Annual SEC filing: 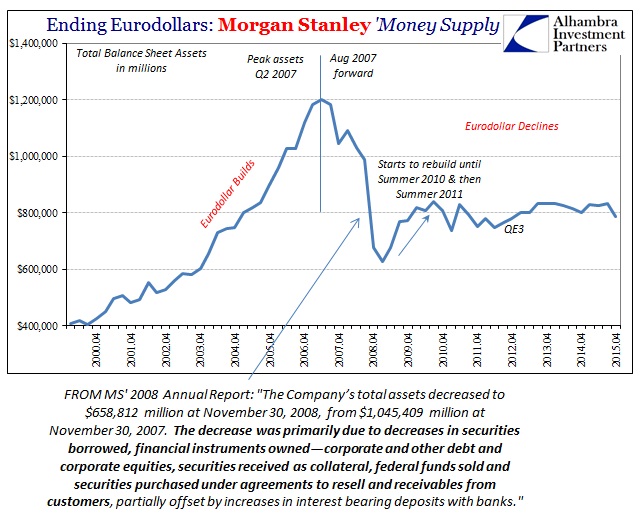 In the immediate aftermath of the panic, however, the bank wasted no time despite the regulatory environment and general disfavor in trying to rebuild – reaching more than $800 billion again in the summer of 2010 just as the euro crisis started with Greece and PIIGS. The bank’s balance sheet then declined until QE3, which saw it rebuild somewhat until just a year later in 2013’s turmoil. It had been essentially flat until Q4 2015 in what will be the start of serious reductions especially in FICC (investment banking). In fact, total assets fell below $800 billion for the first time since just before QE3. There is no way to tell for sure, but you have to figure that Morgan Stanley’s sudden curtailment in Q4 played some role in the liquidations of January 2016 (again, lumpy and uneven withdrawal).

The rest of the less well-defined resources offered (dark leverage) have followed along with total assets. Total gross notional interest rate swaps which had grown again also after QE3 to about $41 trillion declined to about $35 trillion at the start of the “rising dollar”; only to drop drastically the past year and a half to just $22 trillion as of the end of 2015. An almost 50% decline in balance sheet offering likely through compression trades not replaced. Since gross notional balances don’t directly translate into dollars in funding, we have no real idea how much actual funding capacity that decline represented, though we can infer its ultimate impact by what we see around us especially since the middle of last year. 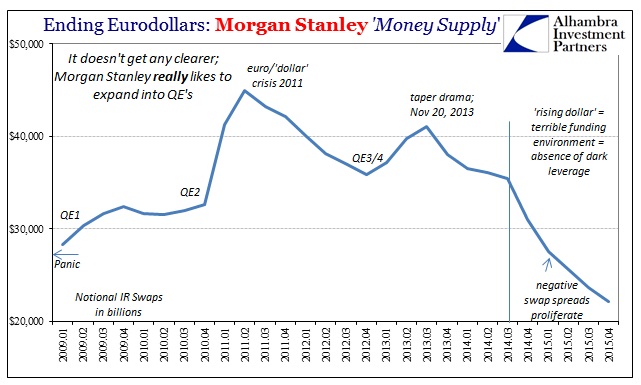 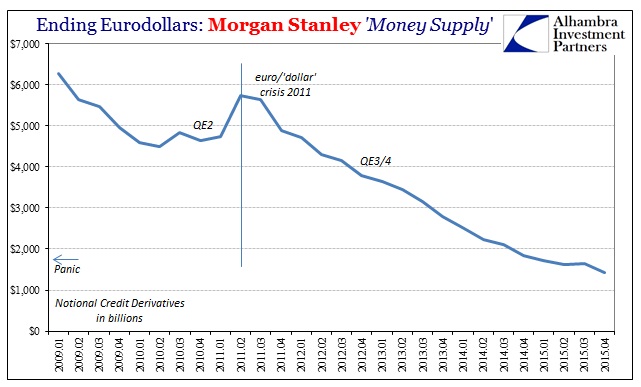 Regulations have made eurodollar functions less efficient in terms of capital ratios and leverage functions, but those are not the deciding factors here. The answer is profit, or the distinct lack of it especially in those periods where central bank action (really misguided perceptions of central bank actions) is missing. Where once these banks only grew and expanded, taking the eurodollar system with it, they now only wither across-the-board. It would be, as I always write, a celebration of renewed focus on actual money and banking if it were at all planned and prepared for, but it is not. An actual recovery would also be quite useful as an aid in the transition, but there isn’t that either (a factor speeding up the withdrawal as part of the profit equation).

What is left is the self-reinforcing cycle of profit (really reduced revenue in the mechanics and accounting of wholesale banking) and withdrawal acting through the real economy as this slowdown that won’t stop slowing down. It is ubiquitous and universal now that the last holdouts (Deutsche Bank, Credit Suisse, Standard Chartered, Goldman Sachs, etc.) have been forced into deteriorating submission. The recovery is dead as pronounced by all this reductive capacity, and even though it was a longshot for revival, it was, I think, the eurodollar’s last hope.

**CORRECTION:  The original version of this article incorrectly stated that Barclays had been nationalized in 2009 due to its investment banking and eurodollar activities.  The offending sentence has been removed.