There Is No Spending

There Is No Spending

The fiscal year for retailers ended in January with nothing like what it was supposed to be. Still, as always, the suggestions remained that a rebound in consumerism would be before too long. If it wasn’t to be evident right away in February, the start of the 2016 fiscal year was at least supposed to be back in the plus column. Last week, Thomson Reuters noted the starting weakness and all the hoped for blizzard implications.

The American retail shopper still isn’t in a free-spending mood. The Thomson Reuters Same Store Sales (SSS) Index forecast for February 2016 indicates a small gain of 0.5%. Excluding the drug store sector, the SSS growth rate is expected to fall to an estimate 0.3%.

A year ago, the final February SSS index registered a much healthier gain of 1.2% and the ex-drug indicator was up 0.6%. However, a 3.0% increase is considered a sign of a robust retail economy.

At least the SSS index is expected to be in positive territory, compared to January’s negative results, partly thanks to an improvement in winter weather. [emphasis added]

Among the many prominent victims of the “unexpected” weakness was Macy’s. Not only have same store comps declined four straight quarters, it has left the company with enormous inventory stocks – historically so.

Although the retailer beat its earnings estimate, the most worrisome metric from this iconic company is inventory days. During the fourth quarter ended Jan. 31, this key figure went from 172 to 192 days, its highest level since we started tracking this metric in 1991. It’s also much higher than the industry average median of 114.1, which means that a lot of Macy’s merchandise is sitting on the shelves. The retailer also reported a Q4 same store sales (SSS) result of -4.3% — the fourth straight quarter of negative SSS.

In other words, retailers are stuck at almost a contradiction. They want robust sales growth, and analysts are expecting that to come in relatively short order, but in order for the retail sector to get there it will need to clear inventory likely at significant (further) discounts in order to rebalance. And they need consumers to cooperate by being especially interested in all this discounted merchandise.

Consumers were already absent in January:

January is usually clearance month for retailers seeking to attract shoppers again after the busy holiday season. This year, it looks like weakness in the December scene carried over into the New Year. The Thomson Reuters Same Store Sales Index forecast for January 2016 is for 0.2% growth overall and for 0.0% growth excluding the drug store sector. Both figures are significantly lower than the January 2015 actual retail growth rate of 1.5% overall and 0.6% ex-drug.

We are seeing that slow holiday sales added more clearance merchandise to January’s inventory. In addition, when cold weather finally arrived in the northeastern U.S. (along with a huge blizzard), it kept shoppers at home and hurt mall traffic in January, particularly at brick-and-mortar retailers.

January same store sales did not grow at all, instead declining rather sharply by 1.1%!
Instead of +0.5% same store growth in February (which would have been, again, atrocious) the nearly final tally for retailers shows flat in February. In other words, after seriously shrinking sales in January there was no rebound at all in February discounts or not. Retailers are in trouble, and it seems as if the difficulties are only lingering and increasing (NOTE: the chart below was from March 1 and includes the +0.5% SSSI estimate for February rather than the current update of 0.00%). 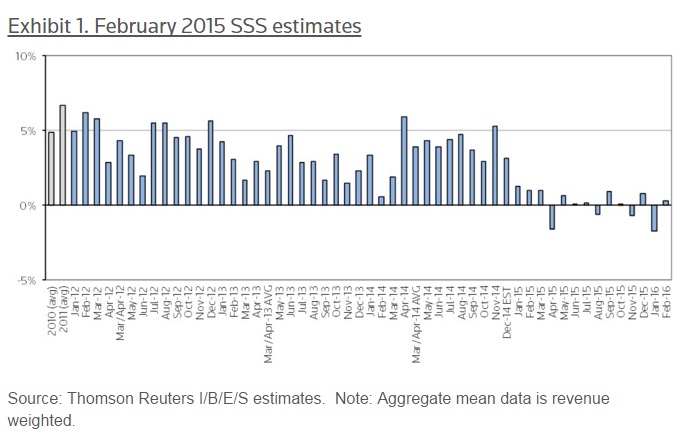 Since 2005, 44% of retailers, on average, beat their same store estimates each month. In February, only 14.3% did. Instead, 71.4% missed compared to the historical average of 54.5%. The weather may have improved, at least so far as an absence of big storms and snow-blown excuses, but shopping did not. That means that the retail environment, as far as sales are concerned, is worse than first believed and showed no improvement at all December to January to February.

In short, as with the Census Bureau’s version of overall retail sales, there is a clear consumer problem with implications spread across not just the US economy but overseas (China) perhaps more so. Despite all that, however, the BLS somehow suggests US retailers are hiring at maybe an historic pace and even accelerated hiring greatly in February. The discrepancy is so large as to be mutually exclusive. It is all the more so given that robust hiring in general always leads to more spending, so if there is no spending growth then that already suggests something else about hiring. There is no spending growth.