The Perils of Citi: The Last of the Eurodollars Part 2

The Perils of Citi: The Last of the Eurodollars Part 2

Even if the eurodollar paradigm had started shifting long before the full panic, this is not to say that various individual firms have not tried to rekindle the former construction; in fact, I have paid particular attention to those who at various points attempted the recreation. Citigroup is one of those though it isn’t clear what the overriding strategy really is. In terms of the bank’s derivative book, Citi had been expanding even in CDS on a limited basis in what was obviously a trial related to the perceived cover of QE1 and QE2. 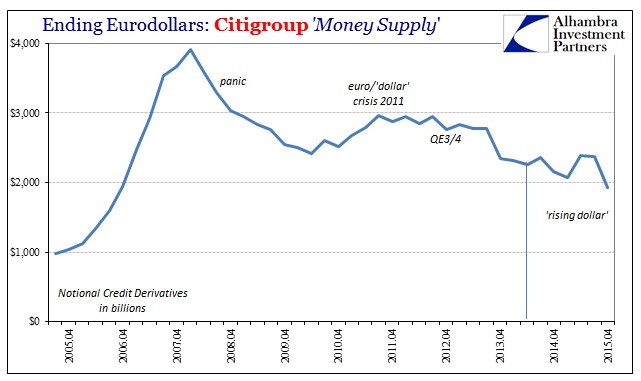 You can see the contradictions in this dark leverage space in sharp contrast to what we supposedly know of banking and even asset markets – though Citi’s ICG unit was losing about $22 billion in negative revenue in 2007, total notional exposure kept rising until March 2008. From the end of Q2 2007 (starting with Q3 and the events of August 2007) until the end of Q1 2008, Citi’s “credit products” notionals jumped by $1 trillion, or 24%. Was that the human instinct to chase bad trades to “make it all back”? Or was it being locked into arrangements (even systemically) that were far more difficult from which to extract positions once it all started moving against? The twin $20+ billion losses for 2007 and 2008 suggest the latter. 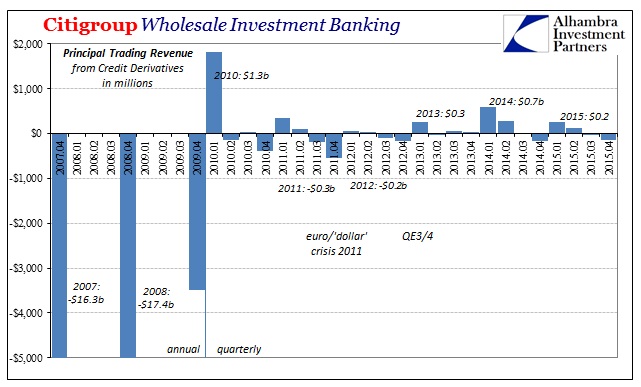 The revenue reports presented immediately above are yet another reorganized format for principal transactions, meaning that losses and revenue totals are not directly comparable with prior totals. Citi reported positive revenue of $1.3 billion for “credit derivatives” in Q1 2010 but not much else since then. In fact, the revenue has been slightly higher as the CDS notionals have rolled off since QE3 and the middle of 2012.

Like the pre-crisis era, if direct principal transactions revenue isn’t the point, and it clearly wasn’t/isn’t, then what is the bank doing? Is it a market share push, sort of a “loss leader” strategy to provide a money dealing service in hopes of capturing other business from clients? Or is/was the bank using its CDS book in combination with other internal activities, warehousing, market making and all that, leaving the exact structure to imagination again?

In terms of interest rate swaps, Citi again bucked the tide and had been expanding its notional offerings (regulations not playing a role?) despite $9 billion in losses in 2008 (again, that revenue total is different under the current format, likely including some of what used to be ICG’s credit losses as well as most if not all of what the bank formerly categorized as “fixed income” principle transactions). In 2009, under QE1 and all the other “stimulus support”, principal transactions revenue now attributable to interest rate swaps jumped to +$6.2 billion. 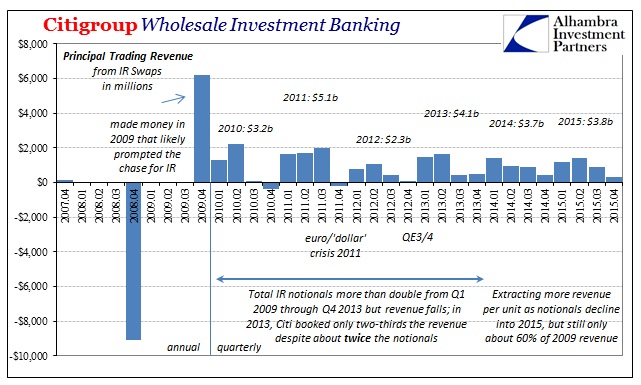 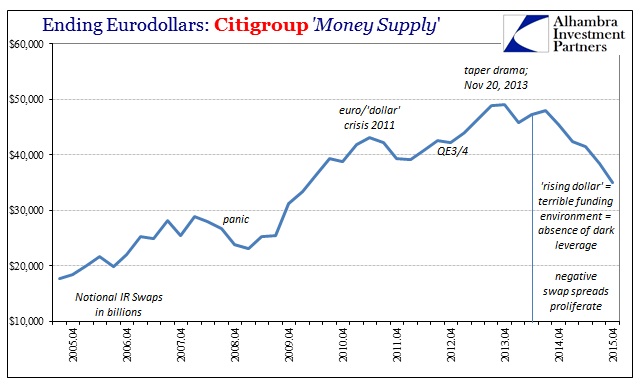 From that point until the events of later 2013, Citi more than doubled its notional exposure to IR swaps. Yet, even though they were expanding, it did not lead to more revenue. In fact, in 2013 the bank reported just $4.1 billion in principal transactions revenue related to IR swaps, which was a third less than 2009 even though total notionals had doubled.

The more interesting part, however, is that revenue has(d) been largely stable even though the bank suddenly decided post-2013 to reverse and start paring back – much more urgently since the first appearance of the “rising dollar.” Just before the events of October 15, 2014, at the end of Q3 2014, financial statements show $48 trillion in IR swaps notional compared to just $35 trillion at the end of 2015. Revenue didn’t follow the same pattern but we can infer once more the potential for the hidden asymmetry of this kind of dark leverage – especially given the conditions during the “rising dollar” period that went along with it.

That last point might be most evident in Citi’s post-crisis forex derivatives book. Like IR swaps, for some reason the bank has been seriously expanding its forex offerings but without any visible revenue growth. The firm had seen relatively large, positive contributions from its forex book during the worst days of 2007 and 2008, but since then, despite the surge in notionals, no revenue growth at all compared to that time. 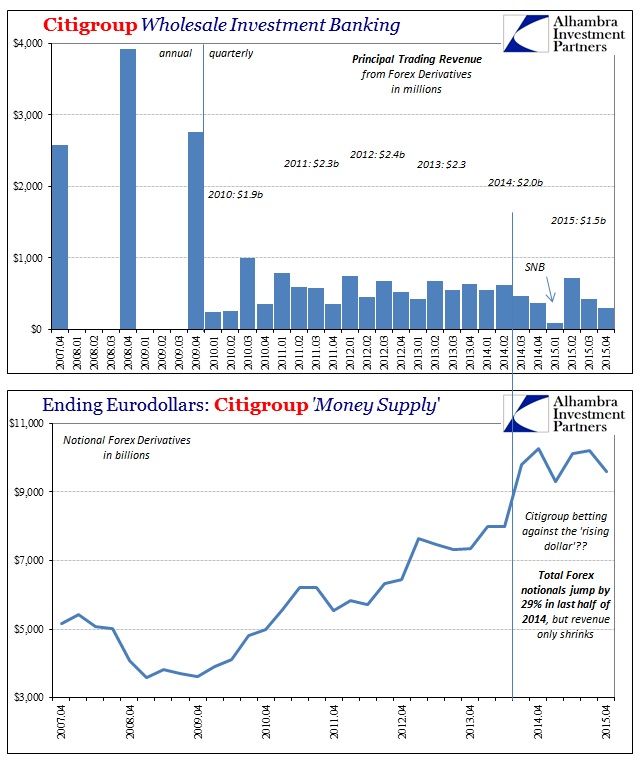 At the end of 2009, Citi’s balance sheet notes showed just $3.6 trillion in forex notional but $2.7 billion in principal transactions revenue. By the end of 2013, notionals had soared to $7.3 trillion but revenue was only $2.3 billion. What might be most important and relevant to the whole eurodollar space, however, is that Citi’s forex book surged starting with Q3 2014 and the “rising dollar.” Total notionals spiked an incredible 29% in just half a year in what looks like a sure bet against the “rising dollar.” Revenue has only declined and seriously so suggesting exactly that kind of wrong-way positioning in whatever related activities. Revenue was only $1.5 billion in 2015, down 25% from 2014, despite more than $10 trillion in notional totals when 2015 began compared to $8 trillion at the end of Q2 2014.

Might the revenue drop start to remind Citi’s managers of hidden and asymmetric risks, especially if or when the bank might be following the wrong narrative? That would seem a particularly significant development especially since revenue in these kinds of functions has only declined, per “unit”, in the post-crisis period. For Citigroup, the bank has had to “do more” to generate comparably less positive revenue, an increase in dark leverage and hidden risk that wasn’t ever rewarded (which may not have been the point) leaving it now examining a future (supposed to be like the middle 2000’s again) where it increasingly looks like it never will be – exactly what I believe other banks had figured out from at least the events of 2011 if not 2008 itself.

The fact that even Citigroup has now clearly shifted during the “rising dollar” even if belatedly in forex suggests that for whatever perceptions driving their lonely expansion in the cross-compartmental derivative book are no longer relevant. To my view, that is “risk” once more overtaking any positive potential especially as Citi’s possible “hit” to their book isn’t yet fully known.

“It has been a tough quarter,” Gerspach said at an investor conference.

The company expects to take a $400 million charge in the quarter “to resize both our infrastructure and capacity” in response to the tough environment, he said.

Gerspach said market volatility has hurt both trading and new issuance. In fixed-income, spread products have been under pressure, while revenue from rates and currencies is being compared against good performance a year earlier.

The “investment banking” side is where all this unknown lies and it is investment banking that makes up the internal structure of the eurodollar system; the credit-based reserve currency that supplies global finance and trade even if we don’t ever know how exactly that is done. When I claim that it is dying because there isn’t any money in money dealing, Citi’s experience begins to reveal that process even if there are so many details missing, hidden and still distorted. The events of 2007 and 2008 were a paradigm shift not least because they showed a brief glimpse as to the true downside of all these wholesale functions, asymmetry that is always going to be present and potential. Some banks, however, seemed to have bought into the contrary Bernanke/Yellen version that QE could recreate 2005 without the “need” for a 2007, a number that has seemingly been pared to none by the events of the “rising dollar.” What little hope these outliers represented after 2011 had been extinguished in 2015.

In the post-crisis era, most banks judged these imbalances to be too much of a burden no matter how much monetary policy was sold as restorative. Maybe that was the lack of immediate revenue expansion in addition to lingering acknowledgement of asymmetric risks, but whatever the full case the majority of the banking system especially after 2011 was never going back. Those that held on, sensing opportunity if monetary policy promises were viable even if revenue wasn’t immediately forthcoming, are being repudiated on that premise. The timing is conspicuous, as the amount of turmoil since the middle of 2014 is both cause and effect – banks that were already exiting speed up and create the conditions that, like Citi’s experience, force those still looking for “market share” ahead of the full recovery to completely rethink that position. Instead, Citigroup is left contemplating more and more only risk without having ever found whatever full payoff they thought was possible, proving, essentially, that its peers had been right all along.

Unfortunately, the global credit-based reserve currency doesn’t hold up well when the last holdouts no longer hold out for the happy ending.