Now We Know Why the ECB Panicked

Now We Know Why the ECB Panicked

The only immediate silver lining may be in the end the most fruitful of long-term prospects. Central bankers have done us a profound favor by overplaying their hand time and again. The catalog of false statements and expectations is long and getting longer. The ECB then assured “us” that this was different and that the LTRO’s, massive as they were, did not work because they weren’t QE. Seeing it described then in countless articles and interviews as something like magic, the speed with which it has unraveled leaves little doubt.

Still less than a year later, it is comical to see what a fuss was made back then when the ECB did nothing more than switch the method. To some economists, there might be a practical distinction between the LTRO’s and the technically named PSPP, but in the end those don’t matter because the true purpose is not now nor has it ever been about how any central bank will interfere, rather the intent is whether that interference further transmits into productive economic catalysts. Who really cares that Portugal’s borrowing costs are record lows if youth unemployment in Portugal is still 30% and general economic prospects are no different than they were four and five years ago? The byproducts of both the LTRO’s and QE has been inert, useless bank reserves whose only real effects have been to completely obliterate the function of “money” markets. The real economy remains undisturbed, unimpressed and still hugely underperforming.

To review the commentary about QE last year in light of today’s events is still, however, enlightening. On March 5, 2015, for example, Mario Draghi was already claiming that QE had worked even though he had to yet purchase a single bond under its gaping auspices.

The surge in inflation expectations, although largely the result of a rebound in oil prices, was cited by Mr Draghi on Thursday as evidence that ECB action was already working.

The European Central Bank appears to be winning its battle to persuade households and consumers that inflation will pick up over coming months and years.

The ECB last month ushered in a new era by launching an aggressive bond-buying program known as quantitative easing that will flood the eurozone with more than €1 trillion in newly created money.

As I have to point out time and again, the “flooding” was not money nor did it find its way into any part of the Eurozone other than useless “bank reserves.” Since “bank reserves” require an extra, bank-driven step in order to convert to something actually useful, the most charitable description of what the ECB has done under QE is that it increased the ledger entries of accounts that are still counted among the traditional “M’s”; which may, in some limited circumstances, lead a minute portion of the European financial system to react as if that were actually an important distinction.

The size of that sliver is undoubtedly far smaller today than when Draghi was taking credit for what he hadn’t yet done. The ECB today released its quarterly modeled updates for economic accounts including HICP calculated “inflation” and it was a total embarrassment. Not only did QE have no impact whatsoever in 2015, it is now being projected by the very same agency that believes in monetarism to its very core to not have any impact in 2016, either. We have to assume that these updated projections include the current, reshaped monetary policy interventions, so what does that say about the whole mess? 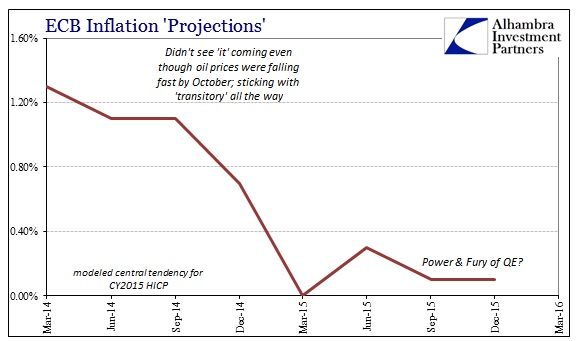 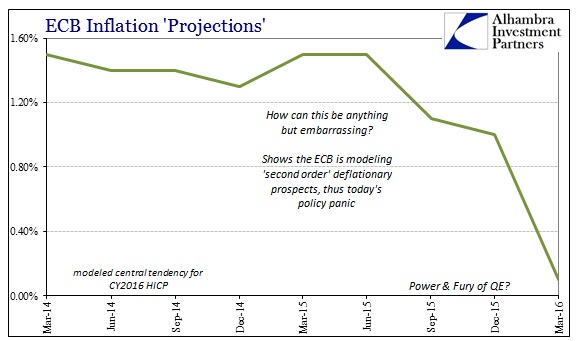 Just three months ago, at the December update, the ECB was figuring 1% HICP for the Eurozone in 2016 – and that was quite a negative reflection upon QE itself. Dropping all the way to near zero at the very next starts to suggest today’s attempt at “wow.” In other words, this is more than just petroleum as the last HICP update for February indicated; the ECB is absolutely afraid that “transitory” was not just wrong it was replaced by a sinking inflation anchor (“second order” inflation effects), the worst of the worst to an orthodox central banker. “Core inflation” was just 0.7% in February, meaning outside of volatile oil and food prices there isn’t even the hint of QE and all that came before it (which was, contra media reports, very substantial).

The ECB panicked. Not only did QE fail to ignite inflation, the second order indications, modeled or real, suggest the real economy is in much, much worse shape than thought just a few months ago. The timing is not coincidental, as again there was a palpable global change starting around mid-year last year, cemented by the events of August and now January. It’s bad enough in policy terms (in reality, the ECB’s ineptness is the bright side in the real economy as should be apparent by what the Bank of Japan did to the Japanese people) to see any calendar year at about zero “inflation” as 2015, but to suggest and model that to repeat for a second? Disaster.

It only confirms what we have suspected all along. There is and has been no recovery no matter how much “flooding” of whatever format, just the intermittent flirtation with positive numbers interspersed between slowdowns, rough patches and even re-recession. Stimulus is just a word.