China’s Total Social Financing hugely disappointed in February, as January’s surge was not followed as if renewed economic enthusiasm. The net flow was RMB 780 billion compared to the record RMB 3.42 trillion the month before. This latest update was instead among the lowest monthly totals since 2010. New loans added up to just RMB 727 billion after increasing RMB 2.51 trillion in January.

As noted last month, context matters. The fact that loan growth and financing flows surged may seem like a positive indication in a vacuum, but such ceteris paribus doesn’t exist outside the classroom. However, given the deep and continuing financial trauma, including the desperation by which the PBOC attempted to manage it all, the possibility was more than trivial that the jump in financing and loan growth was a negative signal about internal banking perceptions. I wrote then:

For Chinese banks, it might be that they realize what the huge surge in liquidity in January actually means – it must be withdrawn at some point in the future (“when” depends on its exact form). Perhaps, then, Chinese banks are especially active ahead of time in anticipation of funding being less than suggested (in the mainstream) in the near future?

The statistics for February seem to indicate that interpretation, though one month is not confirmation. From the perspective of recent years, there was much too much excitement a month ago. Even including January’s huge jump, TSF flow on a longer basis remains subdued. The annual flow through February 2016 was slightly less than that of the twelve months ended February 2015. 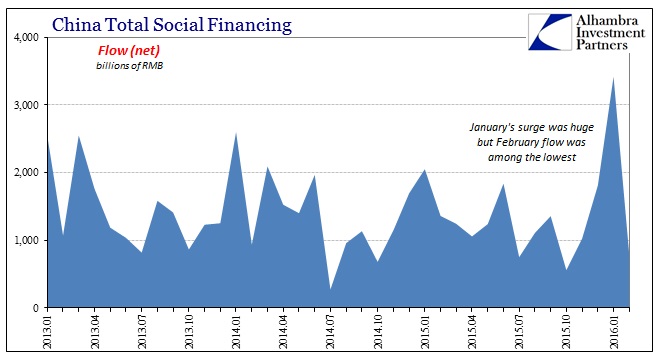 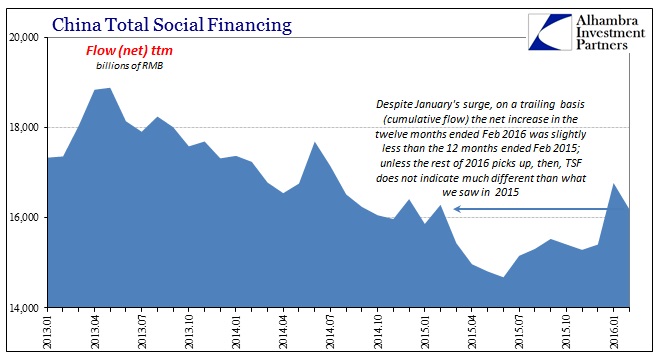 From that view, China would likely need far more than just restoring 2014 levels of financing to actually manage better (artificial) economic growth. And that only happens if loans and TSF flow improves to something more like the mainstream interpretations of January’s numbers rather than the potential pessimistic confirmation of February. That would suggest, if I am right about banks being leery of liquidity, immense pressure on the PBOC to maintain it through what will likely be one big whiplash once January’s interventions start coming due.

To that point, you have to think that recent past experience may have played a role in what banks did in January, as they are intimately familiar with the regularity of these liquidity and funding problems – not to mention the grave nature of China’s related economic struggles (including what -25% in February exports actually means). In other words, the more the economy falls apart, the more likely liquidity does too (“dollar” to CNH) and the prudent move is to prepare for that potential rather than embrace an official narrative that is increasingly overrun by reality.

That view might also be expressed on the borrower side, as those Chinese businesses taking on debt have a keen economic interest in both the surge in January and what it might have meant about the rest of this year.

New medium to long-term corporate lending – which is closely watched as a gauge of corporate investment – stood at 502.2 billion yuan last month, nearly 70 per cent of the new loan total.

But there were concerns that businesses were borrowing new loans to repay old, instead of funding production and investment, Tang said.

If true, that would tend to confirm the view that corporate obligors as well as banks were preparing for a storm rather than embracing growth restoration and reformed optimism. Again, February’s estimates by themselves are not nearly enough to draw a solid conclusion but it does fit with the overall context no matter how much it offends mainstream consensus.

“The authorities put a brake on the credit growth, due to concerns over the overheating property market and rising CPI inflation,” said Zhou Hao, senior emerging markets economist at Commerzbank in Singapore.

The PBOC has always been afforded a great deal more than the usual omniscience believed of central banks, but Zhou is making that case in both directions regarding what are really contradictory TSF assessments. Here is what he said about January’s surge:

If “government authorities” can exercise such direct influence, up and down, then why don’t they do so in perpetuity? They wanted growth in January but then changed their minds in February? The more likely explanation is that economists, in particular, read too much into January about what they wanted to see and were sorely disappointed by February. As noted yesterday, orthodox economics cannot fathom that any government authority, let alone a central bank, does not prioritize the short run and short run growth over any other consideration.

The situation in China is relatively simple – they have little choice. The PBOC is far from omniscient, having fared relatively poorly over the past year; though that may have been just the inevitability of the global financial regime finally catching up. It all comes back to the real economy, and unless something drastic changes liquidity will be following that baseline. It seems very much like banks and even borrowers might really understand the implications no matter how much the mainstream (badly) wants to see and find “stimulus” in everything.