Hoarding, Collateral and the Certain Indication of Balance Sheet Restrictions

Hoarding, Collateral and the Certain Indication of Balance Sheet Restrictions

There is an ongoing mess in repo markets and not a lot of straightforward commentary about it. As usual, whenever any repo tenor trades highly special we hear only about the persistence and plethora of shorts betting on rate normalization. Since rates, overall, have done only the opposite going back to June 2014 and the start of this repo mess you would think even the most ardent of Fed believers would have given up on the idea by now. The FOMC has actually raised rates (in name only) and the UST curve remains fully unimpressed if not more bearish still.

No, there is “something” else going on in repo that suggests sturdier imbalance. While the information we have about the internals of the global “dollar” system is imperfect and far from comprehensive, when there is widespread corroboration even among lacking individual data pieces we can still make solid determinations. About a month ago I wrote that primary dealers were once more “hoarding” collateral with very negative implications about it:

Dealer hoarding of collateral, then, gives us more robust evidence that the market continues to be disrupted by internal wholesale imbalances (and not just repo, as collateral is defined through several important outlets), these eurodollar conduits that support (or don’t) the “global dollar short”, and that the Fed is both clueless and unable to offer anything other than their own confirmation of this ridiculous set of monetary circumstances. SOMA is a potential “silo” of collateral offering perhaps $2 trillion or more and yet there is good evidence of a collateral shortage and that such shortage is related to the prevailing tendency toward unwelcome disorder. It renders yet closer to the final verdict that the eurodollar system is in desperate, intractable trouble and that the Fed can’t do anything about it.

The first implication is that if dealers are reluctant to lend out inventory then that would help explain collateral shortage in the overall repo market – leading to ongoing specials and now fails yet again. The question becomes more so about why dealers have turned to hoarding and continuously so. This is more speculative given the thickly opaque nature of what we are dealing with, but my suspicions fall toward what you see below and not purely as interest rate swaps but more so about what negative spreads indicate. I have a lot more on this topic here (subscription required). 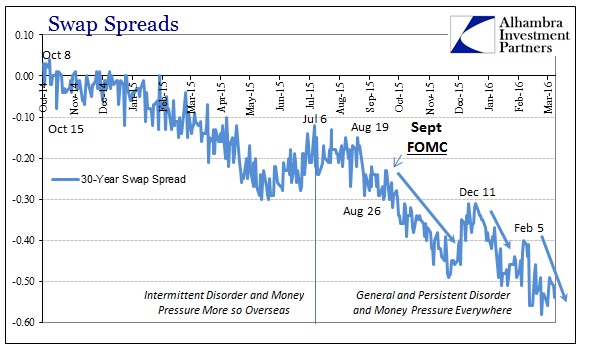 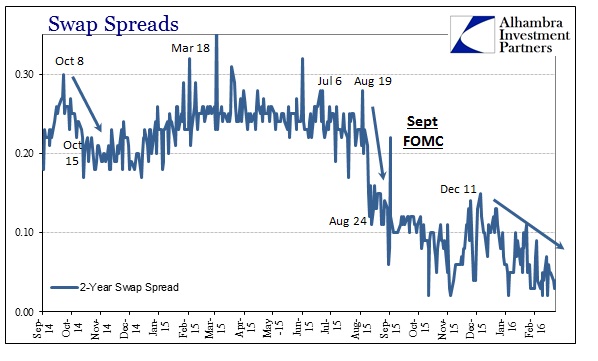