Bond markets have made some dramatic moves over the last few weeks and I thought it an opportune time to review. Credit spreads have narrowed considerably over the last few weeks as risk takers have re-entered the markets. High yield, IG corporates and emerging market bonds have all enjoyed significant rallies. It is our judgement though that – for now – the previous trends remain intact. 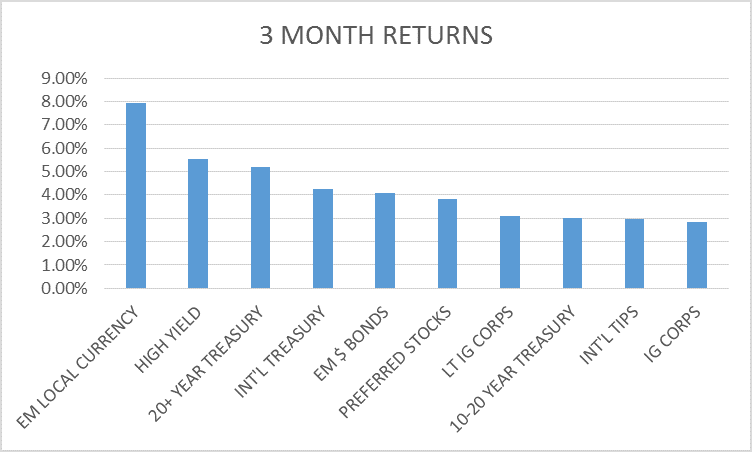 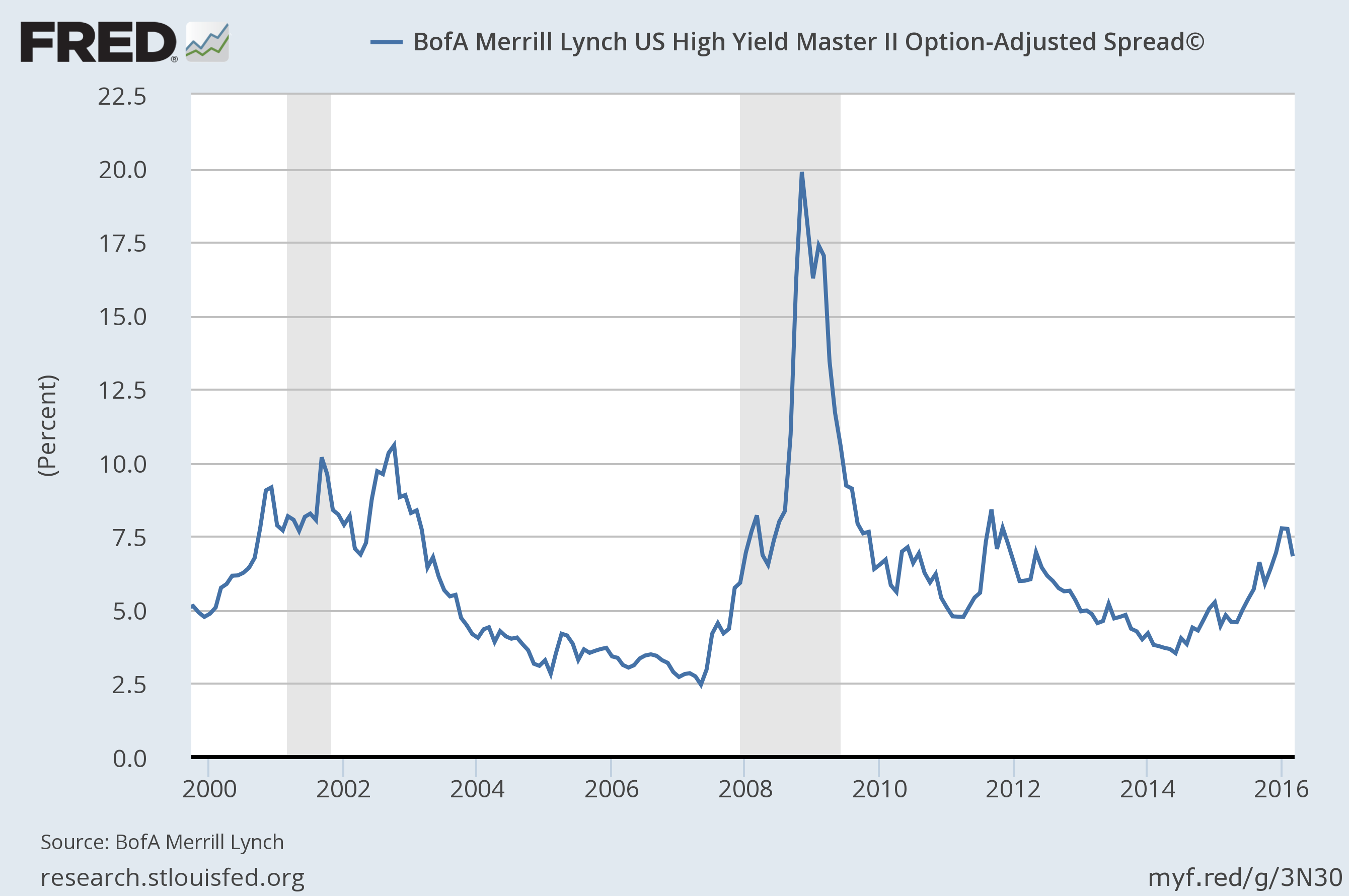 The HY spread is now under 7%, a very big move over the last month. But as you can see, this type of move after a widening isn’t unusual even in the face of recession. Indeed, there was a similar narrowing even after the official start of the last recession. Now, I’m not looking for anything like what happened in 2008 but if we are headed for recession spreads in the 10% range would seem a reasonable target.

The High Yield ETF has had a nice run: 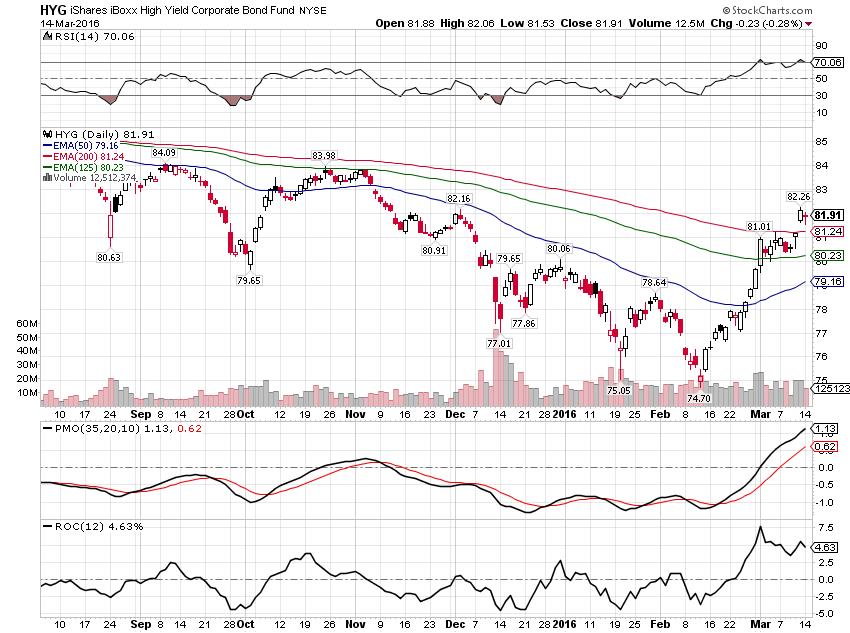 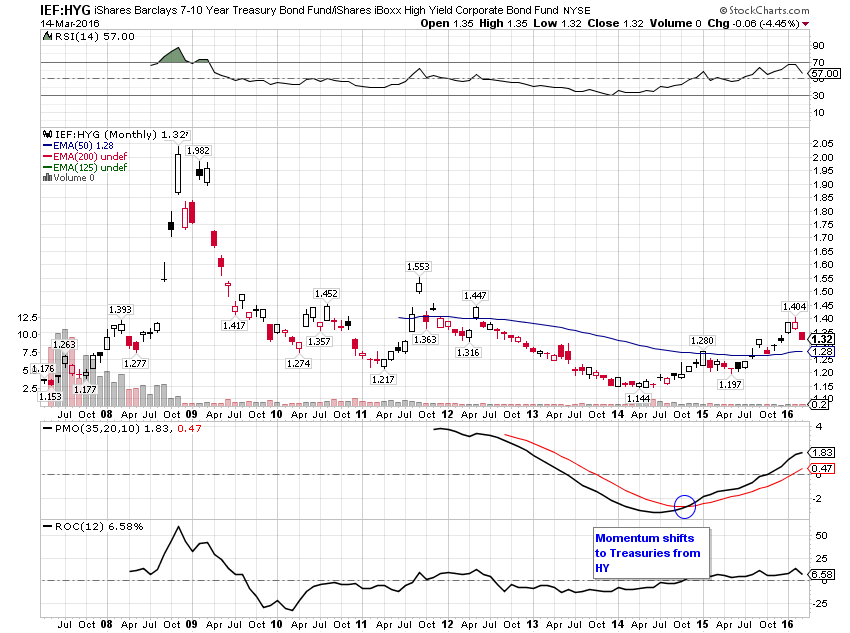 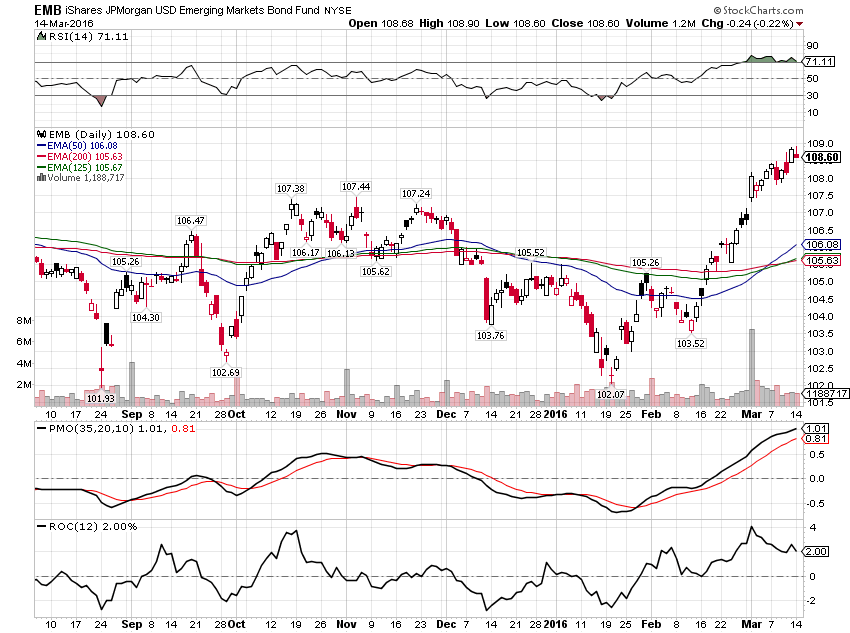 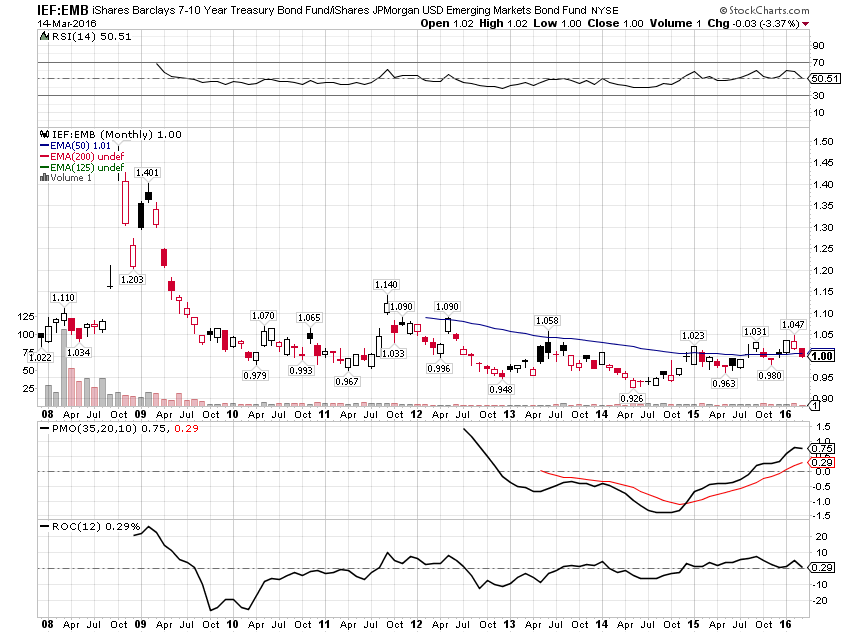 Investment grade corporates have also rallied in this risk on phase: 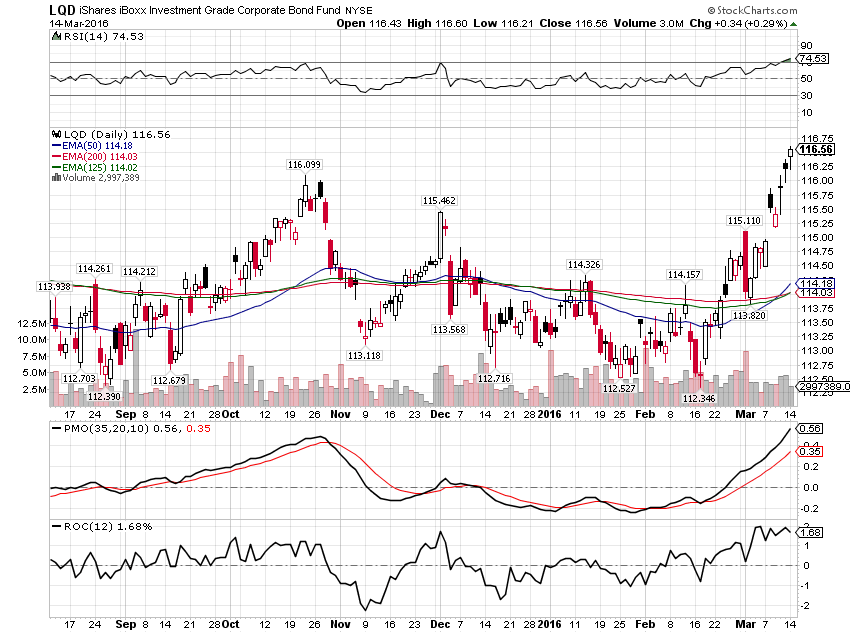 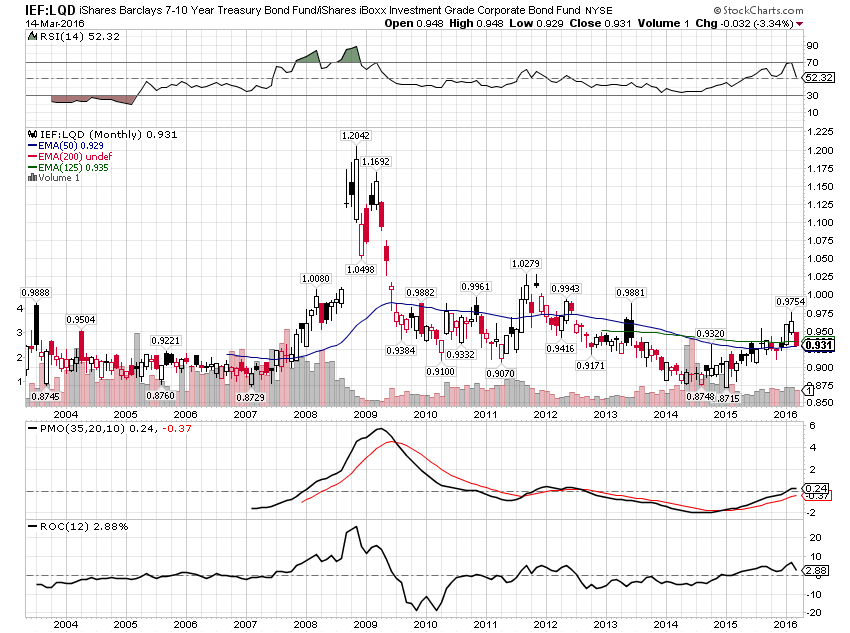 Short term Treasuries have outperformed longer term for the last few weeks but the long term trend is still intact with duration outperforming: 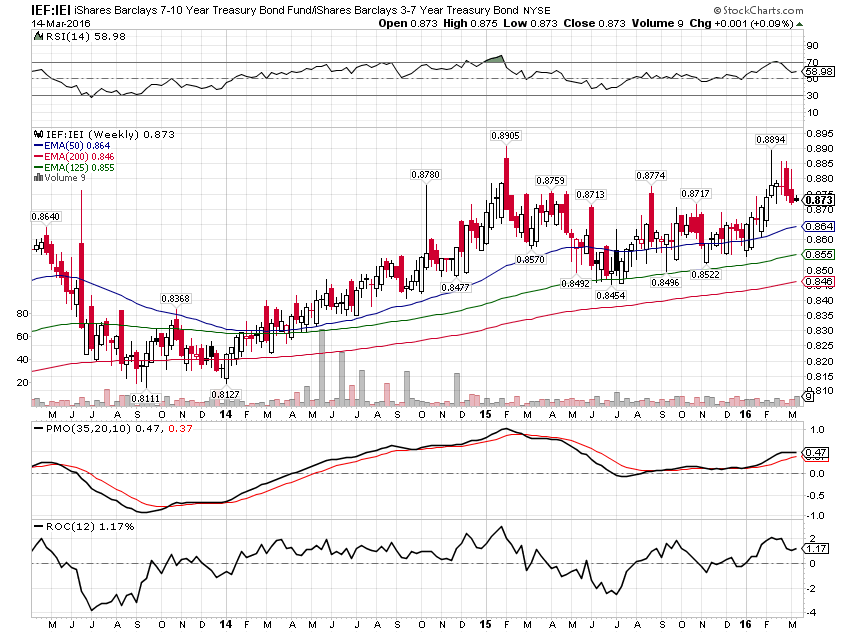 Yes, it is possible that a double top is in the making, that long term bonds are peaking relative to short term. Long term momentum is still positive but barely. And frankly this is something I’ve been wondering about for a while now. If commodities are going to make a comeback – if gold is once again acting as a leading indicator for that space – then at some point, bonds are going to have to take a hit. Inflation is the bond market’s kryptonite and it generally hits long term bonds harder than short term. That’s just one possibility though. It could also be that short term bonds outperform long term – the yield curve steepens – as we enter recession. That is actually what we should expect if history is any guide. Short rates collapse faster than long rates as the Fed eases: 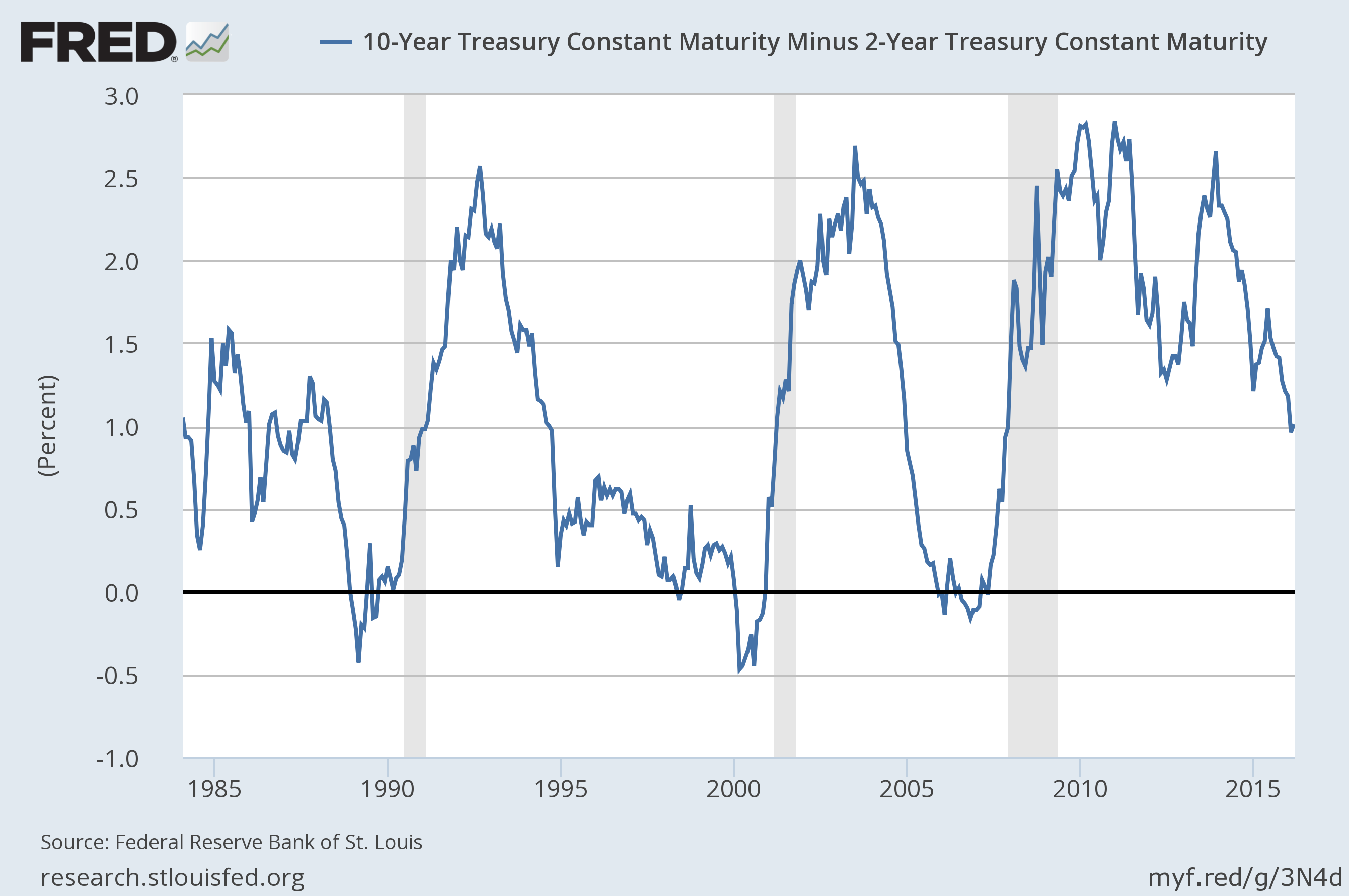 Of more interest to me is the emerging trend in foreign bonds relative to US. The dollar peaked a year ago and while it hasn’t broken out to the downside yet, that seems to be where we are headed based on our momentum analysis. As the dollar weakens, foreign bonds should start to outperform and that is exactly what we are seeing:

Long term momentum has not triggered a buy signal yet but our more aggressive accounts already have an allocation to BWX. Short term and intermediate term momentum indicators have already flipped to buy: 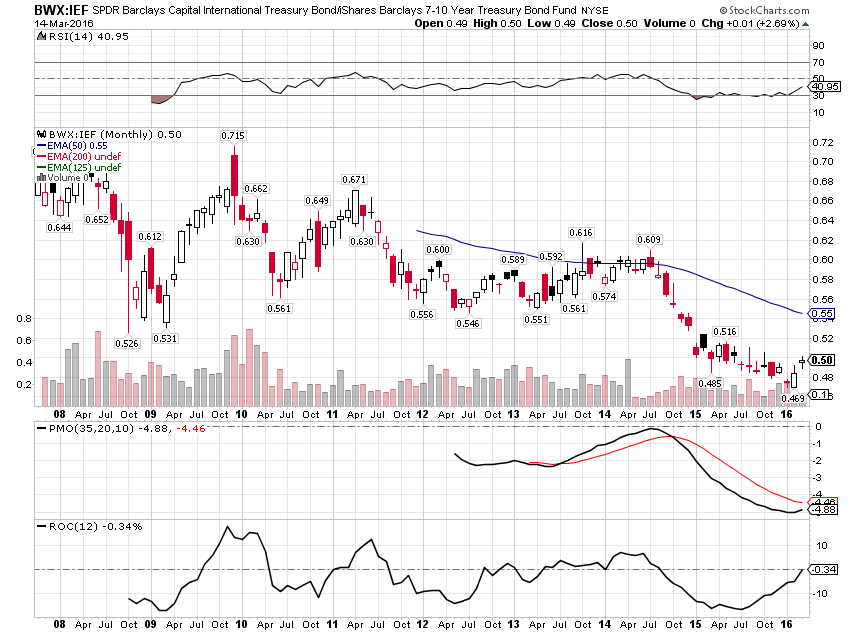 For now, the most that can be said about the recent bond market moves is that the oversold conditions have been relieved in the riskier parts of the market (credit and duration). Maybe it will turn out to be more but if so, we’ll need some positive economic data to back up these moves. There has been some improvement recently but not enough to change the general trend.