There was a robust debate inside economics earlier in the recovery period over Okun’s “Law”, the seemingly stable relationship between the unemployment rate and real GDP. The Great Recession was stunningly large in terms of the skyrocketing unemployment rate given that initial estimates for real GDP were bad but not as catastrophic. This was more than a theoretical problem for economists because these were the numbers and correlations that were used to put together at least the size of the ARRA (its composition and format pure politics). Since they couldn’t accurately model the scale of the recession (and economists couldn’t believe, with all the Fed “accommodation” and rescues, that it would ever go that far) that led them to undersize the fiscal “stimulus” – at least in their estimations.

Paul Krugman right from the start of the process complained that it was too small and because of that it wouldn’t work and would risk disproving the whole theory. Thankfully he was right on that count at least in American public opinion about that act. His formulations for “needed” size composition were also traced to Okun’s Law:

The starting point for this discussion [2009 fiscal stimulus] is Okun’s Law, the relationship between changes in real GDP and changes in the unemployment rate. Estimates of the Okun’s Law coefficient range from 2 to 3. I’ll use 2, which is an optimistic estimate for current purposes: it says that you have to raise real GDP by 2 percent from what it would otherwise have been to reduce the unemployment rate 1 percentage point from what it would otherwise have been. Since GDP is roughly $15 trillion, this means that you have to raise GDP by $300 billion per year to reduce unemployment by 1 percentage point.

Revisions to the GDP end of the Great Recession seemingly restored that relationship in Okun’s Law, as the severity was far worse than originally thought; meaning that the unemployment rate seemed the better gauge than the initial run of GDP (which, again, shows that these statistics aren’t what most people think they are; these are stochastic models full of biases and subjectivity). It wasn’t as if there weren’t other data points suggesting the recession was really that bad, as almost anything else was collapsing, from consumer spending to business investment. The unemployment rate held all the corroboration.

However, the debate reignited in the early “recovery” period as the unemployment rate started to improve rather starkly without actual improvement in GDP, leaving many to wonder if Okun’s Law was intellectual destitute yet again. From 2012:

“For a long time, we and most other economists used Okun’s Law as a rule of thumb for deciding what kind of unemployment rate we should expect given a GDP outlook,” Tilton said, calling the recent loss of correlation “really quite striking.”

“We’ve actually had growth almost exactly in line with that over the last couple of years, just below 2½percent,” Tilton said. “That would historically have suggested unemployment would be relatively steady. But, instead, it’s down almost 2 points from the peak in late 2009, early 2010.”

This disparity has only continued even though various agencies and orthodox groups have tried to find alternate and even creative methods to rekindle Okun. In 2014, for example, the Federal Reserve Bank of San Francisco revisited the subject and found it restored – by attempting to take out the labor force problem that has truly plagued the unemployment rate this whole time.

Unemployment rose more quickly in 2008 and 2009 than expected given the modest decline in GDP reported at the time (see, for example, Daly and Hobijn 2010). Subsequently, unemployment has fallen quickly despite fairly modest growth in GDP. This deviation from the average relationship raised questions about whether the severity of the Great Recession had fundamentally altered the underlying workings of the economy…

To simplify our study, we focus on the relation between output growth and changes in the unemployment rate. In particular we analyze four-quarter growth of real GDP per person aged 16 to 64 and four-quarter changes in the unemployment rate. Using GDP per person helps account for demographic changes to the working-age population that may affect GDP growth. [emphasis added]

In other words, if you account for some of the workforce shrinkage (even if you think it related to retiring Baby Boomers and nothing more) then your shrinking economy appears far more conforming. That’s the problem with the unemployment rate on “this” side of the Great Recession; it may have been corroborated well in late 2008 and 2009 but not anymore. Instead, if the economy doesn’t appear to be growing fast enough then economists might just redefine the economy to the more narrowed view.

In a speech given in early 2013, before her turn as Fed Chair, Janet Yellen actually admitted this dynamic, or rather lack of dynamism as it had been (and continues to be) a source of uncertainty about the economy and policy implications:

The greater amount of permanent job loss seen in the recent recession also suggests that there might have been an increase in the degree of mismatch between the skills possessed by the unemployed and those demanded by employers. This possibility and the unprecedented level and persistence of long-term unemployment in this recovery have prompted some to ask whether a significant share of unemployment since the recession is due to structural problems in labor markets and not simply a cyclical shortfall in aggregate demand.

To some economists the “permanent job losses” seem to have been eased or even erased by the “best jobs market in decades”; Yellen herself hasn’t been quite as vocal on the subject, but we can easily infer from at least December’s rate hike that her doubts about the labor structure are not so rigid and largely because of what the BLS reports. And what the BLS reports still doesn’t match anything else including GDP, and GDP as related to Okun’s Law.

We have start with a difficult proposition which requires looking at the disparity in two separate ways. It is as Dr. Krugman asserts in the passage I quoted above, “what it otherwise would have been.” In other words, for stimulus you estimate/measure what GDP would be without it and suggest the results in unemployment as compared to what that would have been without it. As noted from the 2012 debate on Okun, the baseline for GDP seemed to be about 2.5% (since revised lower) for the “recovery”, meaning that so long as real GDP expanded by 2.5% or so the unemployment should show zero or at best very modest improvement. Working backward from that point, if we assume that the QE’s worked and worked so well that all the improvement in the unemployment rate over the past five years was attributable to Bernanke’s “courage”, then we can assume on the GDP side “what it otherwise would have been.” 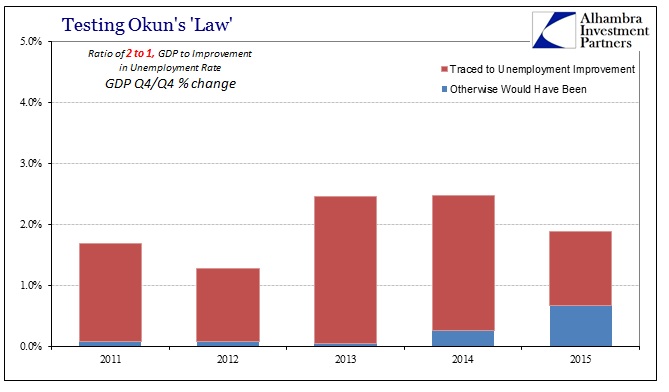 In 2011, the unemployment rate fell from 9.3% to 8.5%. Using Krugman’s 2 to 1 ratio, that would suggest 1.6% in GDP “improvement” from QE2 (which was still active in the early part of the year). Since real GDP is currently estimated (Q4/Q4) at just 1.68% for that year, using these assumptions that would mean GDP “otherwise would have been” about 0.0% for 2011. So if we assume the unemployment rate valid and its improvement due to monetary “stimulus” then Bernanke was indeed a genius because the economy would not have grown without it.

Worse (or better for Bernanke’s reputation if you believe any of this), as you can see above if we continue these assumptions it suggests that the economy would not have grown at all on its own until a little in 2014 and 2015. Using a 2.5 to 1 Okun’s Law ratio (below), QE actually saved us from further slight but persistent contraction. 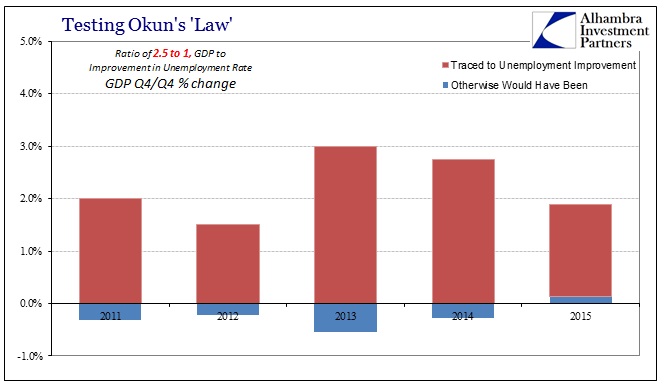 These scenarios and counterfactuals are wholly unconvincing as it is highly unlikely the economy would exert absolutely no growth on its own. Even natural population expansion would lead to positive growth, let alone in the shadow of a huge decline which really should have been met by symmetrically huge expansion. In other words, the natural, organic tendency of the economy should have been quite positive rather than something close to zero. That these results from Okun’s Law modeling indicate anything like that only suggests that there is indeed a big problem with the unemployment rate (or GDP being hugely understated).

If we extend Okun’s relationship in the other direction, assuming that GDP growth would have been at least somewhat positive, then we can assess the potential for this mismatch from a more natural posture. 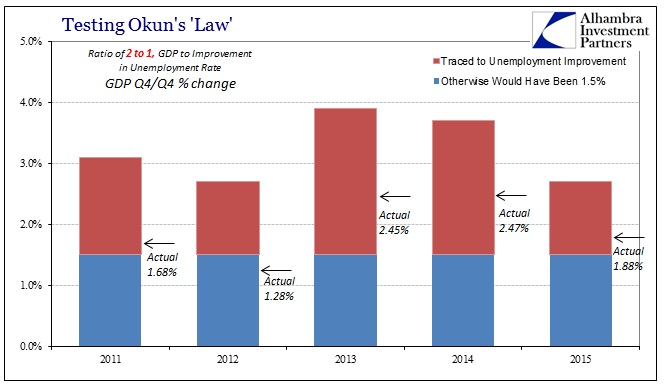 Assuming only a 1.5% gain in real GDP potential growth as “otherwise would have been”, and that is a paltry, hugely reduced vision of potential, the improvement in the unemployment rate in 2011 should have meant something like just over 3% real GDP (assuming a 2 to 1 ratio). Instead, real GDP is currently figured at not even 1.7%. In 2013 and 2014, the unemployment rate suggests nearly 4% GDP expansion rather than less than 2.5% in each. At a ratio of 2.5 to 1, these disparities only get larger just as they would if we assumed less modest and more historical potential growth (like 2.5% to 3% rather than a 1.5% baseline). 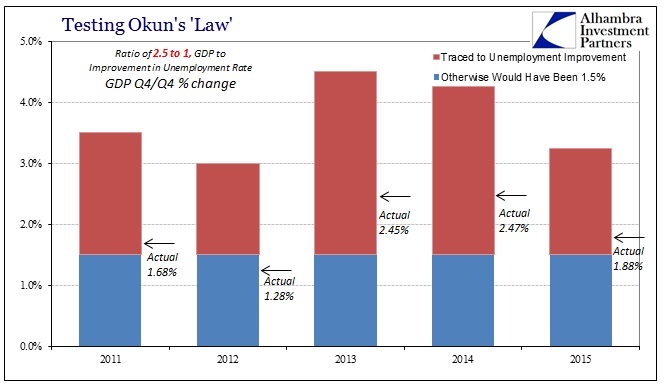 If, however, we maintain all the same assumptions but use instead of the official unemployment rate an alternate version that captures a constant labor participation rate (the same as I used in JOLTS and the Beveridge Curve alternates), the results are far closer to the current BEA calculations for GDP. 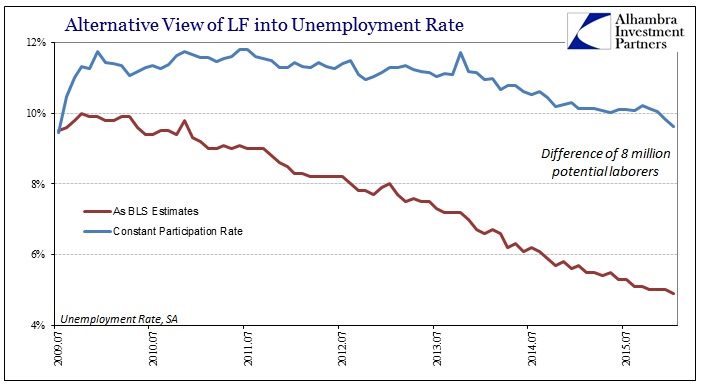 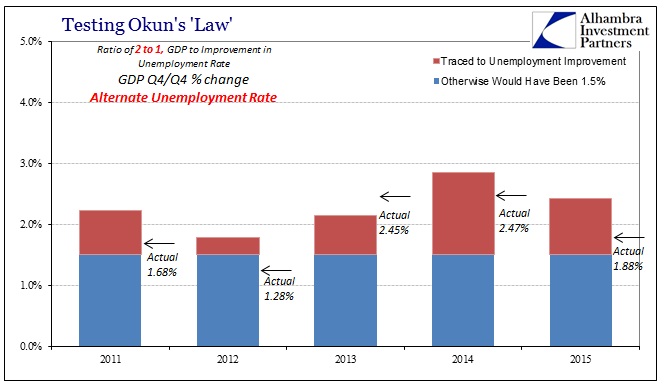 As you can see immediately above, the alternate view fits far, far better and in every year. This does not suggest that I have found an answer to Okun; far from it. It only appears to work because I have used a stunted 1.5% “otherwise would have been”, which is itself significant in this context. What this substitute account does propose is that if Okun’s observed relationship is generally valid if not in concrete formulaic fashion as economists model, then ignoring the millions of potential labor sitting outside the official unemployment rate is highly misleading. This suggests that weakness in GDP might actually be attributed to the fact that labor utilization has seemingly shrunk, and shrunk by an intensive amount after the Great Recession. Focusing on just the supposed job participation within the emaciated part can only lead to enormous disparities among data sources (such as retailer employment to retail sales).

In other words, common sense; an economy that uses far less labor than it once did isn’t likely to be as robust as it once was. We can argue about the reasons for that and the scale of the problem, but the fact that conventional labor statistics don’t fit other observations only confirms it.

The scope of this particular data review does not suggest why the economy might have shrunk (not that that takes much imagination to assert), but the fact that it requires these sorts of alternate calculations and reverse engineering does indicate that some of the major statistical accounts are not well-suited to this unique environment. That is why corroboration for the unemployment rate view is strikingly absent during the “recovery” as it is based on an (intentionally) incomplete survey. In this alternative view I propose above, the fuller incorporation of “missing” labor plus the stunted “otherwise would have been” standing in for deep, structural economic problems better account for observed GDP and leave very little for disagreement in general view of Okun’s Law. The FOMC’s own models suggest as much, which means that the economy over the past few years was never like the “best jobs market in decades” and still isn’t now. 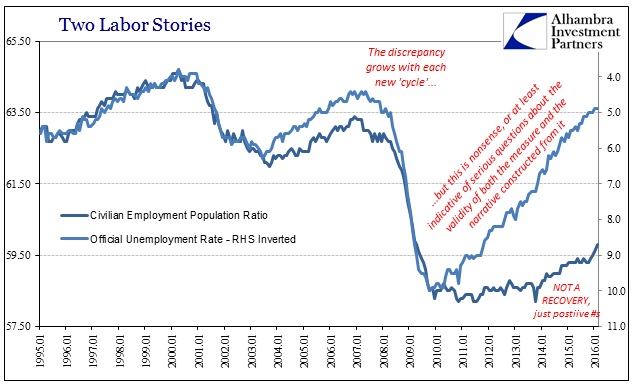 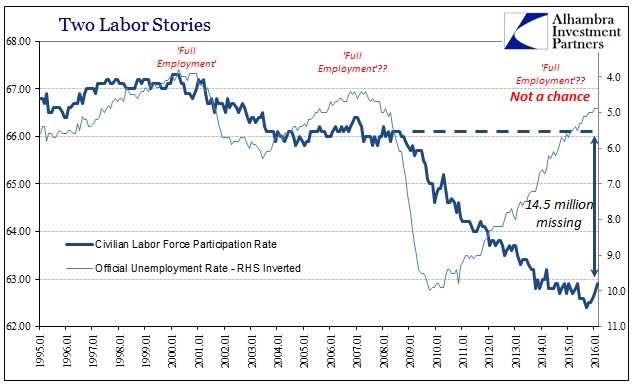 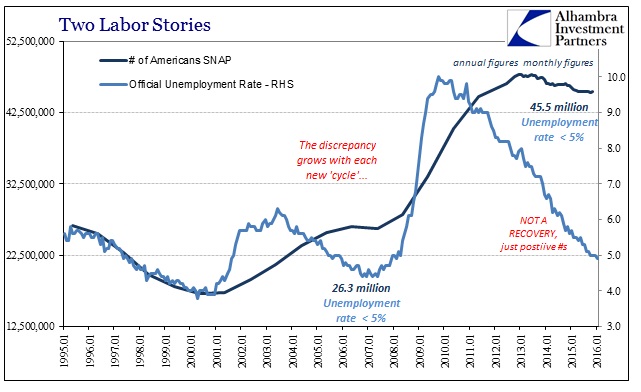