Oil prices remain ebullient, relatively, compared to the dismal start to the year. Everything else, it seems, is driven by that background which means “dollar.” In that respect, we look to China or at least the Asian version of the “dollar” for guidance on triangulating funding conditions and future potential positioning. The CNY exchange is still within the post-Golden Week window which is why oil prices (and everything else) are floating unanchored to continuous deterioration in fundamentals, oil as well as global economy. 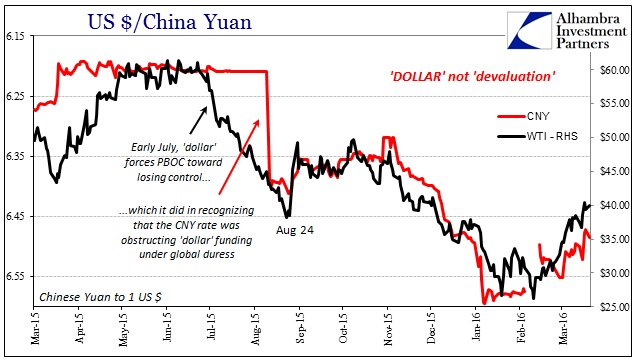 There are some places in the “dollar” system where it seems fundamentals are still primary. I wrote on Friday about the record negative spread in cross currency basis swaps related to yen, which I believe is traced to Japan’s exposure to China as a “dollar” conduit (funded at the start by local yen liabilities, or what used to be called “hub and spoke” wholesale). A cross currency basis swap isn’t supposed to have any effect on the currency exchange rate since the swap itself is neutral on both ends – there is an upfront, agreed upon exchange price for the initial swap and then the same at maturity that removes exchange volatility. However, given the extreme imbalance in the basis (payment exchanges for “borrowing” each other’s currency) it must be having an exchange impact as at least an indication of wholesale “dollar shortage” if not more directly via the basis swap imbalance itself.

To that point, the JPY exchange rate has been stuck since February 11(the very day that oil rebounded) in a conspicuously narrow range. In other words, it suggested that even if general liquidation pressure had abated the funding imbalance was never removed or alleviated. Liquidity is not necessarily liquidation, and the former can remain atrocious even when the latter is nowhere to be found. 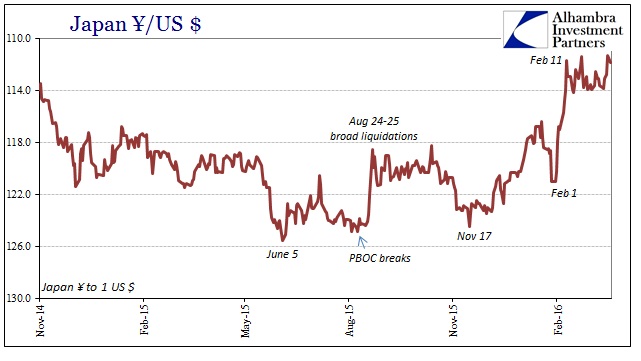 I think that delivers us both parts of the Asian “dollar” equation, where CNY has suggested liquidity and JPY its reverberating counterpart. 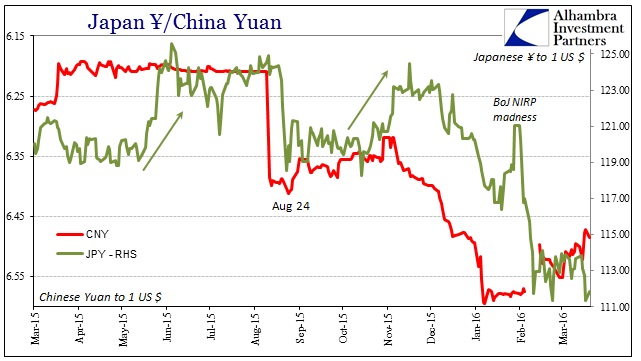 What I find most interesting is how CNY leads JPY both against the dollar, which would seem to suggest that China/Japan connection. In other words, in both May/June and September/October it was relative calm indicated by pegged or even slightly appreciating CNY that showed up as “depreciating” JPY (and lack of global, general liquidations). In August and then starting again in November, CNY turns desperate and drags JPY after several days (or weeks) delay into the same maelstrom. Global asset prices are more attuned to JPY, meaning this indirect pathology. 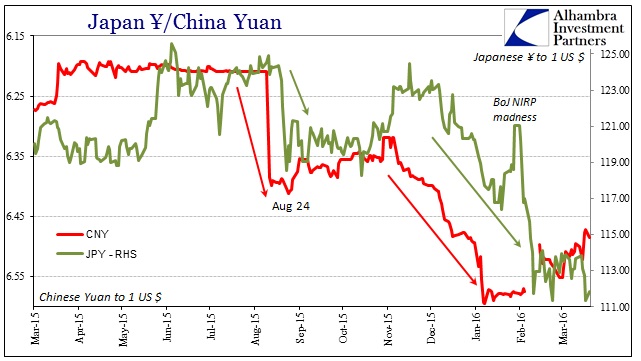 The difference in February 2016 is thus striking, as JPY has uncharacteristically (at least compared to the prior two interim periods) failed to respond to the CNY indication except via an end to the devastating appreciation (“rising yen” as “rising dollar” only with a “weaker dollar” shown via that yen). In other words, sideways to perhaps still slightly higher in yen where higher CNY might suggest the opposite as in the recent past. Given, again, the ongoing mess in basis swaps and JGB’s it might propose some alteration in the relationship (and I can’t think of how that would be a positive result under these circumstances) though for the yen this is exactly as happened August, September and the first part of October.

At the very least, it seems to recommend the illusion that CNY gives us as the internals are stuck in even worse shape than before. Japan has always been a significant “dollar” conduit dating back to the very first instances of the eurodollar system itself, including “selling UST’s”, in the 1960’s. With the Bank of Japan into NIRP with extra QQE and the “wrong” move in JPY anyway, you have to admit that “something” isn’t right. With China’s economy falling further into the unending slowdown, Japanese exposure to China would be that “something” especially in view of “dollars” tracing through Tokyo to Shanghai (and, let’s not forget, Hong Kong).