In late summer last year, just in time to accompany the first blast of contraindicated economic reality, Statistics Canada announced that Canadian GDP had contracted in Q2 2015. That followed an “unexpected” drop in Canadian GDP in Q1 which was supposed to be like oil prices and only a “transitory” deviation on the road to ultimate monetary policy success. Even with that GDP contraction and “technical recession”, economists flippantly dismissed the event as a quirk or anomaly. Time Magazine even wrote an article in September (of all months) under the headline Why No One’s Worried About the Recession in Canada that contained the assurance of the Bank of Montreal’s Chief Economist that it was the “Best. Recession. Ever.”

For a short time, it seemed as if that might be the case with GDP only slightly negative in H1 and then a rebound in GDP starting in Q3. Statistics Canada showed a 2.4% gain in the July-September quarter that contained all the global misery but for once even economists were worried that there was more trouble lurking behind that positive number.

Avery Shenfeld, Chief Economist, CIBC Capital Markets said while the central bank wouldn’t cut rates on the back of a weak monthly reading, it will have to acknowledge that the fourth-quarter is “running weaker” than its 1.5-percent growth projection. He expects the bank to cut its growth forecast and when it does, Shenfeld says the market will be pricing in reasonable odds of a rate cut.

“We are going to skirt awfuly close to the kind of economic numbers that will bring the Bank of Canada in with a rate cut and I certainly wouldn’t rule it out at this point,” he told BNN.
David Tulk, chief Canada macro strategist at TD Securities agrees.

“The final quarter of the year is looking rather dismal for the Canadian economy,” said Tulk.

“The wider backdrop of falling oil prices and renewed caution among businesses investing in the oil sands suggests the risk of an extended slowdown heading into Q1 remains significant,” he said, adding that the chance of a rate cut in the first quarter “has grown appreciably.”

That seems to be the baseline, as oil investment overall in Canada has become a major drag and one that is lingering even in the “good” quarters. Business capital formation, or Canadian capex, fell in every quarter in 2015 – and at rather alarming rates. In annualized terms, Gross Fixed Capital Formation fell 12.5%, 7.9%, 5.2% and 6.5% in calendar order. That’s a tough backdrop for any economy especially when something that was supposed to be temporary turns into such a structural “hole.” 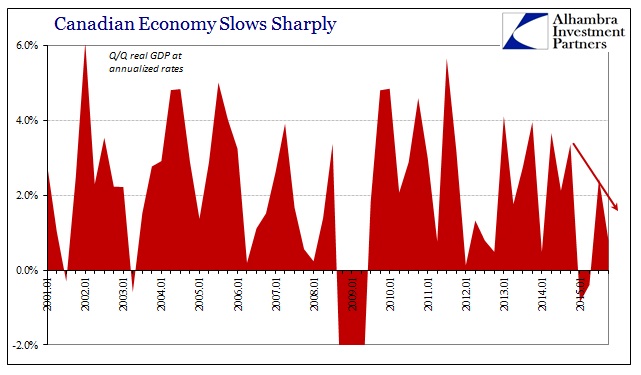 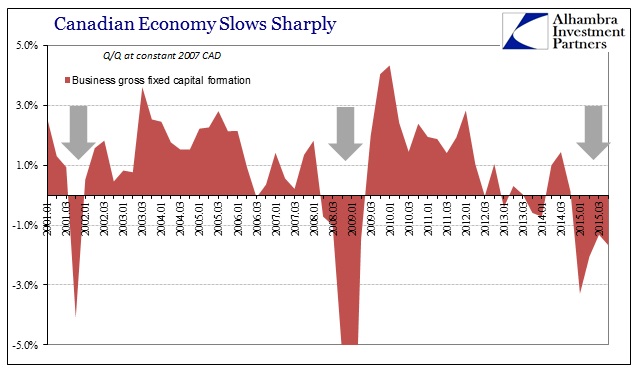 To this point, the Canadian household sector has yet to feel the massive forthcoming adjustment, which to some economists means isolated oil weakness but in reality points out that Canadian oil businesses (and the financial sector) have largely absorbed the impact of oil prices. The longer the downturn continues the more likely that Canadians will be forced beyond the “best” technical recession “ever” and into a very real and perhaps determined modification. 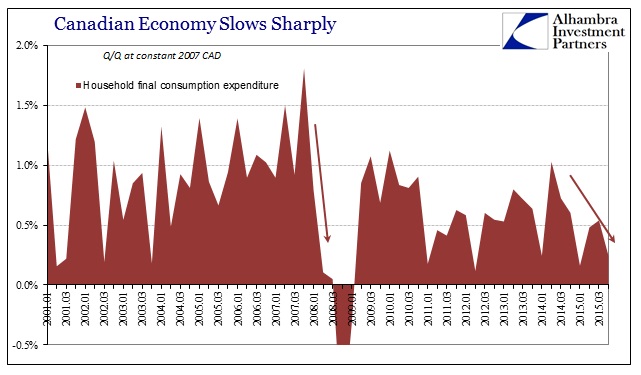 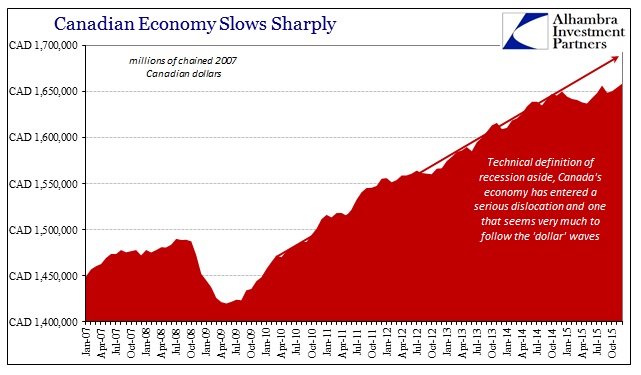 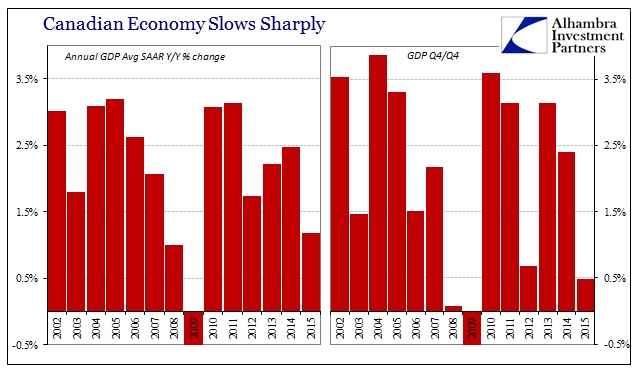 In early March, Q4 GDP which had been expected to be zero was instead estimated at +0.8% (annualized rate), bringing out the usual overstated enthusiasm for “resilience” and even “strength.” Those sentiments miss the longer point, which is not about any single quarter of GDP, nor even GDP at all. Canadian GDP and its economy are acting in many ways like what we see in the US, a downtrend marked by increasing instability in the one metric constructed to show as much strength as possible. It at times looks like recession and from other angles not, but nowhere is actual “strength” and “resilience” found. In their place are hollowed sentiments that now pass for standards of judgment and interpretation. As CBC of all places published, there is maybe intentional disingenuousness at work:

David Madani of Capital Economics had an even gloomier take, telling clients in a note that “it underlines how bad things have become in Canada that the 0.8 per cent annualised increase in fourth-quarter GDP, above the consensus forecast for no change, will be celebrated as some sort of economic renaissance.”

Indeed, any number not negative is treated as some sort of bright success. We are so far removed from actual, sustainable economic growth that many don’t even know what it feels like, or looks like (Bernie Sanders supporters can actually be forgiven on this count). The entire dominion of economics has taken to studying how to recraft this reductionism as natural instead of answering the charge of it in the first place. Two weeks after Canada’s GDP report, a senior economic advisor for HSBC unintentionally confirmed as much.

The global economy appears to be trapped in Japan-style stagnation, HSBC’s high-profile senior economic adviser said on Tuesday, adding his voice to the chorus of economist warnings.

Stephen King said economic activity around the world was slowly deflating, with undershoots in both growth and inflation.

The nonchalance is striking, as if the world economy suddenly “forgot” how to grow and expand. Hearing economists talk about it, and the resultant failure of all the huge and genius “stimulus”, you would think there was some kind of enormous, unforeseen endogenous shift in human behavior or something that can somehow account for all of it. That was the flirtation with “secular stagnation”, after all, which on its face suggests that monetary and fiscal policies failed because respective economies are suddenly now themselves defective in a way in which they never had been before. Eight-tenths of a percent growth is now praiseworthy as if that were perfectly natural.

In the US, 2% growth has become the very ideal of “overheating” even though it comes nowhere close enough to the unemployment rate nor historical experience with actual recoveries. And it isn’t as if there aren’t other unusual correlations, either.

“These shortfalls are reminiscent of Japan’s difficulties in the 1990s and beyond. Relative to projections five years earlier, Japan was nursing a 24 percent nominal GDP shortfall by the turn of the century. And many of Japan’s problems are now being replicated elsewhere: Low bond yields, falling bank share prices and deleveraging,” King said in a report.

Knowing absolutely nothing about economics, you might come to the conclusion that “low bond yields, falling bank share price and deleveraging” were all related, and worse all related to periods of sustained subpar growth. First in Japan; now everywhere else. Maybe “stimulus” isn’t that at all, and might, especially over the long run, produce the opposite tendencies. The more central banks push for “aggregate demand” the less they seem to find of it. Maybe that does suggest something wrong in the real economy, but it is much simpler and and far more direct to figure that stimulus might not be what everyone seems to think of it – especially over the long run.

Canada is perhaps a perfect example of that, with so much of even downshifted “growth” in this “cycle” being determined by financially-driven oil prices and perceptions of them. It is one element of redistribution via monetary policy, as it proposes economic trends that would not otherwise exist as if they were a perfect substitute for organic growth (Paul Krugman’s “idle” resources as if there aren’t periods and prices that would naturally suggest idleness; i.e., recession). Economists, owing to Keynes’ assertion that all that matters is the short run, don’t care how GDP is generated just so long that it is. If that means gigantic, financially-driven business investments predicated on $100+ oil, then they are all for it no matter how ill-conceived such conceit (especially when it is financed by the mother of all junk bubbles).

The negative effects of redistribution are piling up everywhere around the world in what looks like a slowdown that won’t stop slowing. Because it isn’t traditional recession, economists plausibly submit that it isn’t before making the illogical extension that recession therefore isn’t possible at all. In other words, because it isn’t typical recession it must be continued growth. From that view, positive numbers are thus successful results when instead they mark the continued slow decay of financially unwinding financialism.

The world did not just forget how to grow after the Great Recession, rather policymakers and economists were counting on the recovery to look like the pre-crisis period – to return to the eurodollar baseline. They fostered that expectation in the most backward way imaginable, because they mistakenly believed that the eurodollar’s ascent was their own effectiveness! Thus, it looked like they could do no wrong (aside from the occasional asset bubble) before 2007 when in fact the eurodollar had very little to do with them (as evidenced by, among other things, the explosion in credit default swaps starting in 2004, almost the exact moment Alan Greenspan started “tightening” and leading to his farcical “conundrum”).

Without the eurodollar “tailwind”, the financialized economy seems stuck in place, at best, no matter what or how much “stimulus.” The geniuses of the 1990’s and early 2000’s are now left muttering about demographics, low bond yields and deleveraging, and trying to take credit for growth rates that once marked the onset of recession and serious difficulty. Central banks never did matter that much, which was really proven in the events of 2008 but the world still isn’t ready to turn the page on them; thus, we are stuck with the mainstream looking in that direction for answers and finding none, only confusion and (finally) growing frustration.

Because of that, economists can claim that the economy is broken when it was monetary “omnipotence” all along. It is hard to dismiss and it is getting even harder to, as “dollar shortage” appears everywhere as does this slow negative trend pointing down in more and more places. The uniformity and timing are what are truly compelling in that systemic way, making mockery of last year’s mainstream dismissals that there might be anything standing in the way of complete and inarguable recovery. A year, and a great deal of mystifying finance, makes a big difference – but not quite yet enough.