The economic reports since the last update present a dichotomy. While there has been an improvement in the surprises – more better than expected reports – the overall tone of the reports has been fairly negative. Part of the explanation for that is the plethora of regional Fed reports over the last two weeks, almost all of which showed significant improvement. That contrasts somewhat with the real manufacturing data we received. The Durable Goods report in particular was quite weak, down 2.8% – and better than the -3% expectation. Ex-transportation orders were down 1% and core capital goods orders were down 1.8% (but down just 0.1% year over year).

The personal income and spending report was also disappointing. Income was soft, up just 0.2% with the wages and salaries portion turning negative. The spending portion was also a disappointment but more for the revision than the current month. Last month’s 0.5% rise had been cited by the bulls as evidence the economy was doing just fine but almost all of it was revised away with January and February both now printing at 0.1% gains.

In real estate both the existing and new home sales figures were consistent with the flattening trend we’ve been seeing there. Real estate appears to be suffering from price shock to some degree as prices are rising fairly rapidly, up around 6% year over year. With rents also rising rapidly, shelter is one area where deflation doesn’t appear to be a concern. Construction spending was a bit less than expected but is still rising at double digit rates year over year.

Besides the aforementioned regional Fed surveys there were some other positives. The ISM manufacturing report improved just as the Fed surveys did. 4th quarter GDP was revised a bit higher but at 1.4% is still a pretty meager portion of growth. Exports and imports of goods were both reported higher by 2.0% and 1.6% respectively. Jobless claims continue to track below 300K and consumer confidence and sentiment both ticked higher. And of course, payrolls continued to improve, up 215K in March. The participation rate even ticked up a bit keeping the unemployment rate from improving despite the jobs added.

But as I said the overall tone of the reports continues to be fairly negative. The big picture Chicago Fed National Activity Index deteriorated to -0.29 confirming an economy growing less than potential. The Atlanta Fed’s GDPNow is tracking Q1 growth at just 0.7% right now. With corporate profits down 3 consecutive quarters and a fourth nearly assured, it may not be recession but it sure isn’t very good.

Our market based indicators continue to reflect that weakness and are generally pointing toward some mild – so far – stagflation. The yield curve has stopped flattening as Fed action looks further away – although the employment report may have changed that ever so slightly. Credit spreads resumed widening as the oil price recovery appears to have run out of gas. 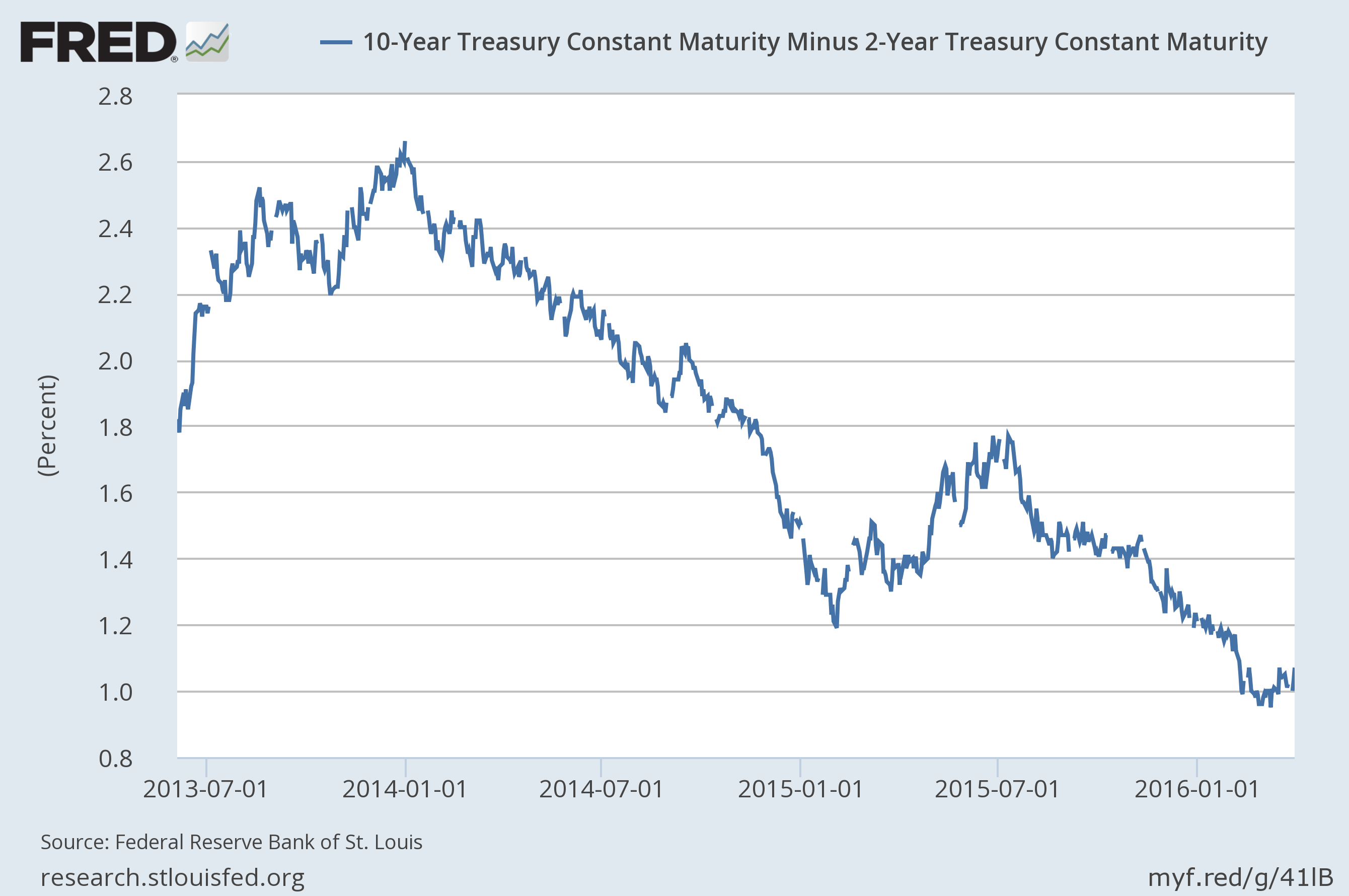 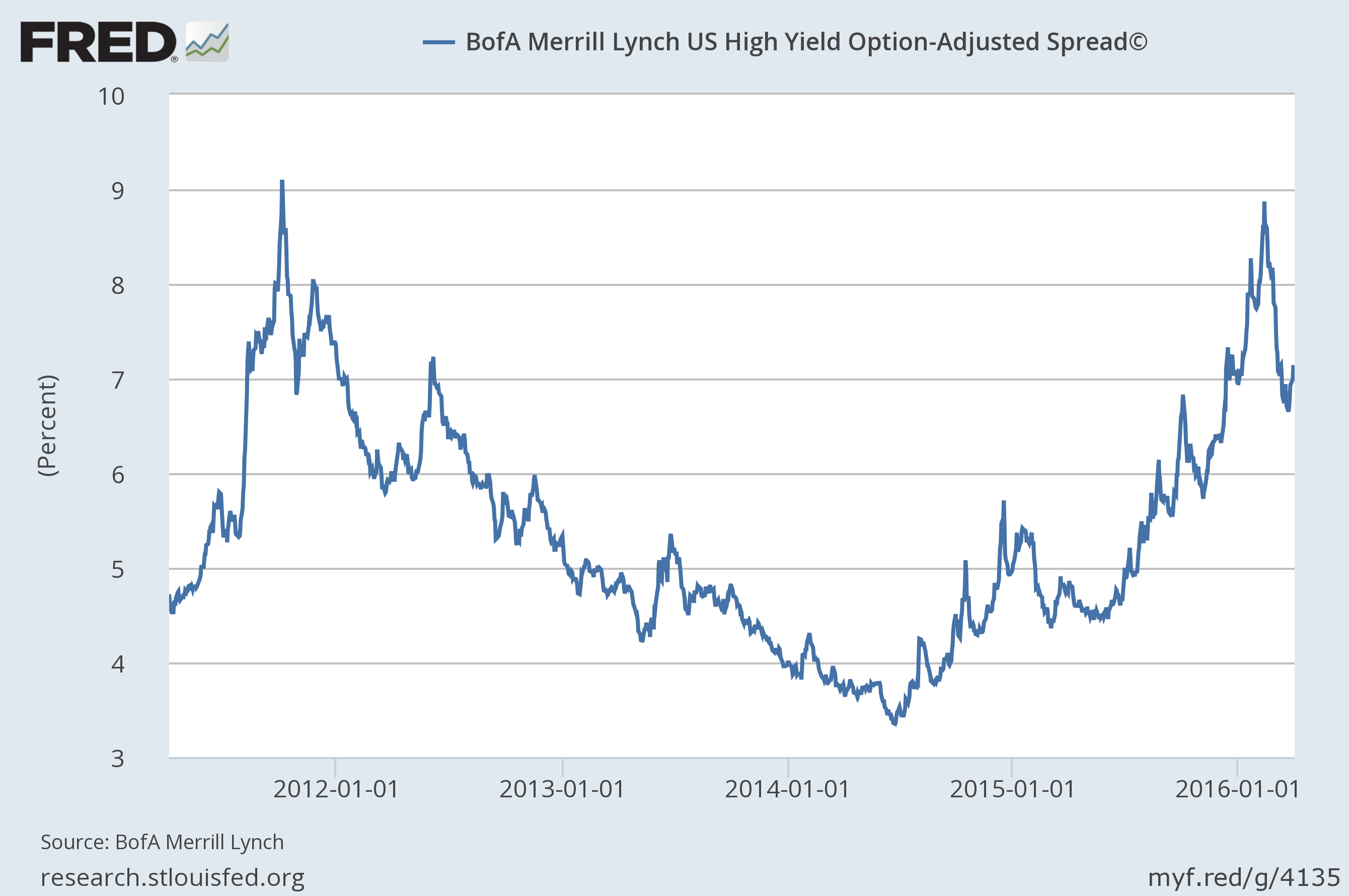 High yield prices haven’t fallen much since my last economic update but Treasury prices have outpaced them handily, bonds rallying along with stocks. 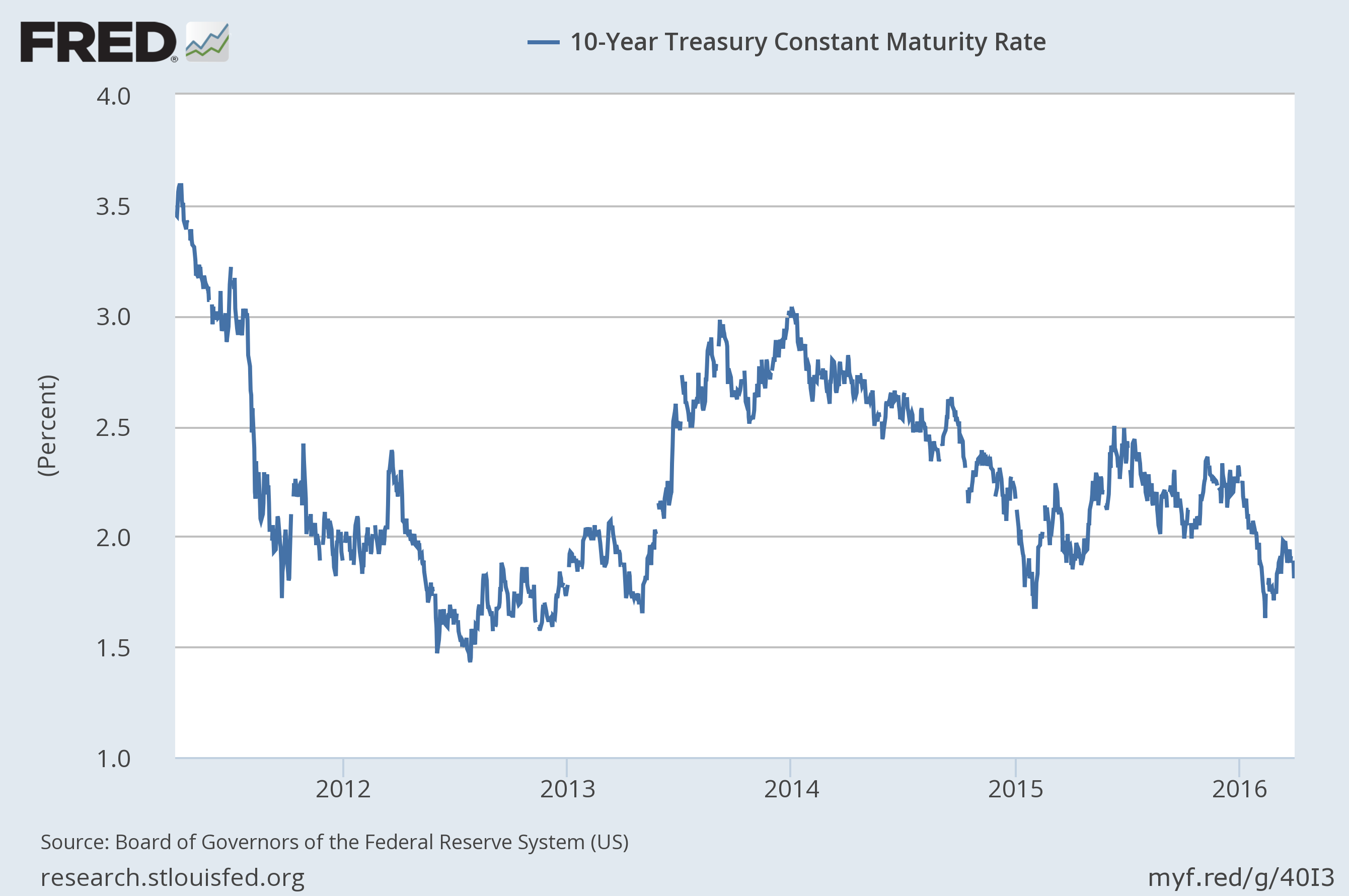 But the real action has been in the TIPS market where the 5 year moved deeper into negative territory. The difference in the rate of change between nominal and and inflation protected bonds means inflation expectations continued to rise. 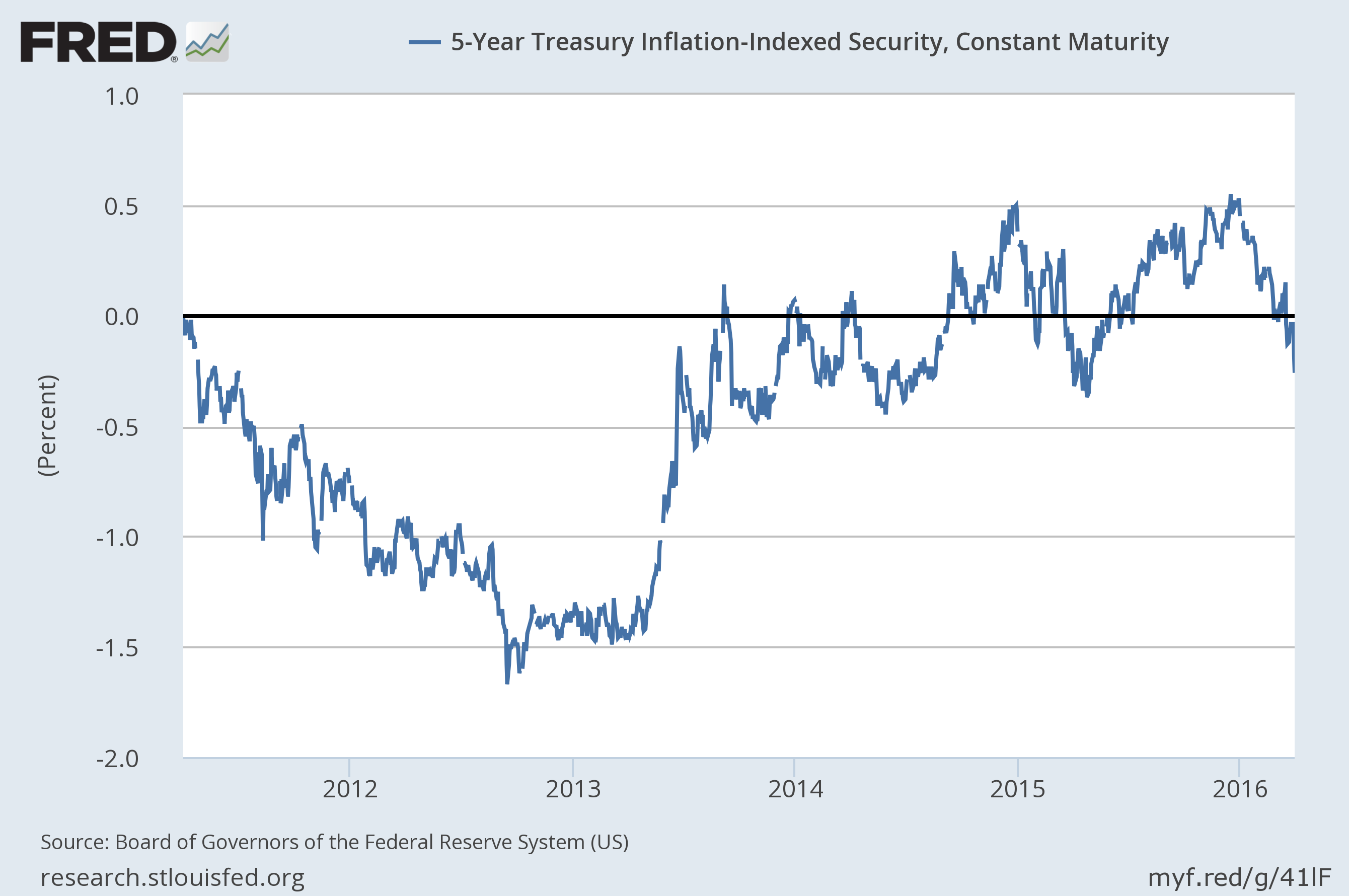 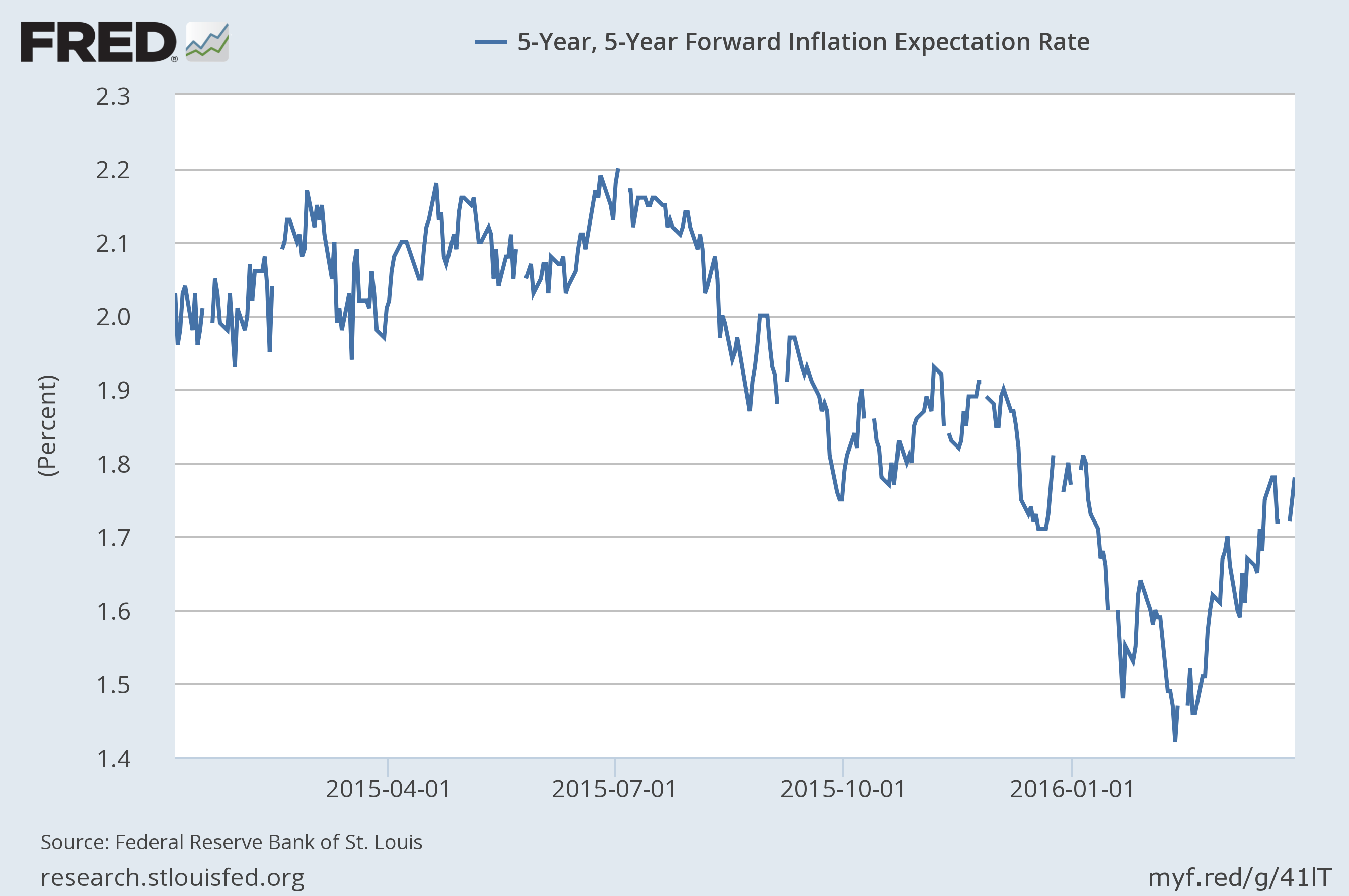 So with nominal and real yields falling the market is signaling a general slowing of economic activity, nominal and real, while inflation expectations continue to rise. The changes are fairly small so far but that is the dreaded stagflation, a nasty combination that is hard to defeat. The weakening dollar is either causing that change in expectations or a result of it, take your pick, but with Yellen leading a chorus of doves, the buck is taking it on the chin.

Dollar resumed its downtrend but is still hanging onto support 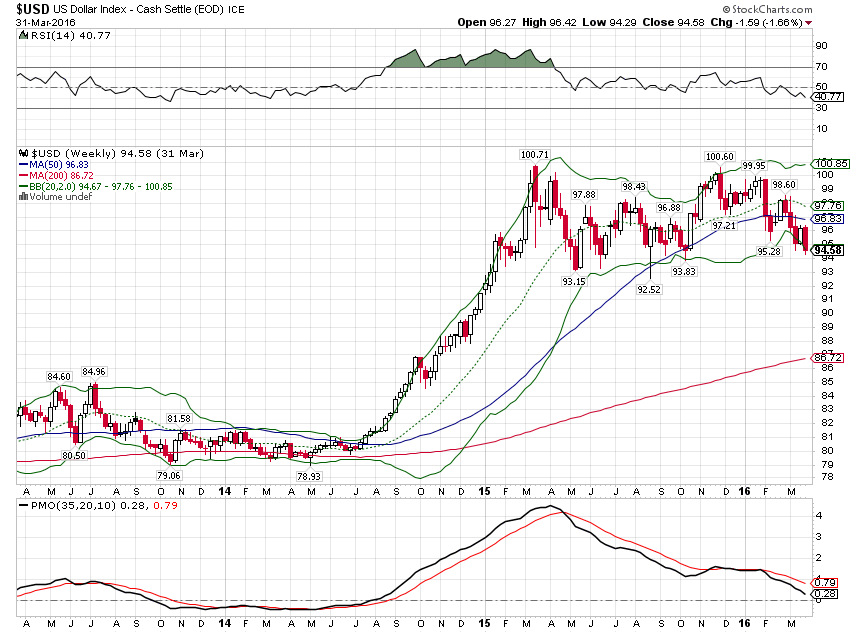 The commodity rally appears to be resting, correcting a bit since the last update. With little expectation of a Fed tightening at the next meeting I don’t expect that to last. A countertrend dollar rally and commodity correction would be perfectly normal after pretty big moves. 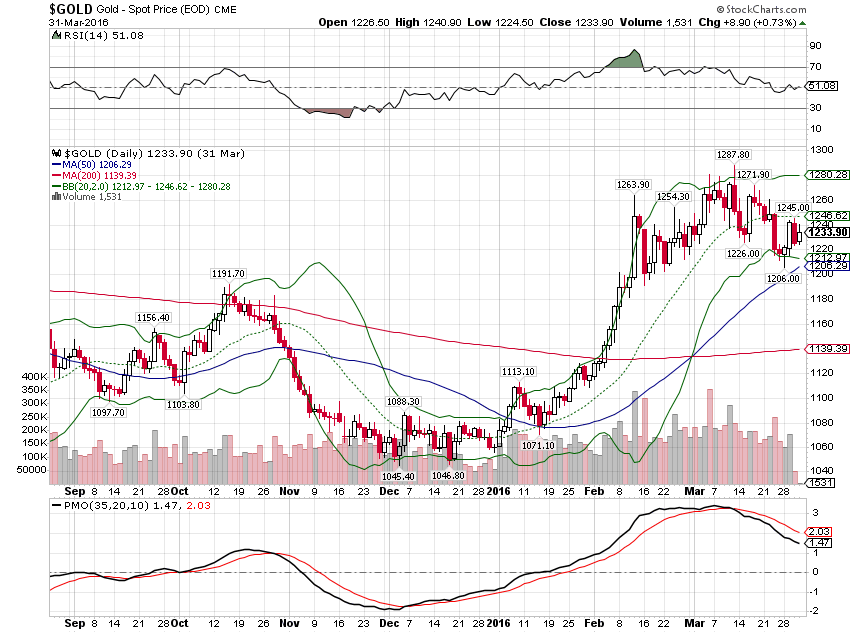 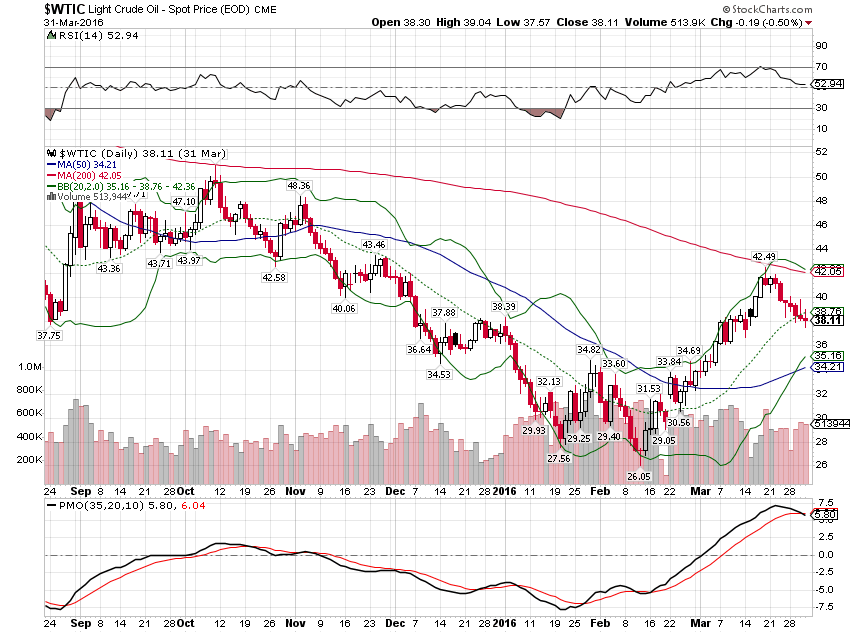 But the trend, at least for commodities, does appear to have changed from down to up. For the rally to accelerate and broaden though will likely require a further fall in the dollar. At this point it seems that what we are seeing is a shift in global growth expectations from the US to the rest of the world. Whether that shift is being driven by monetary policy convergence or as a consequence of coordination (don’t tell me that doesn’t happen; I’m old enough to remember the Plaza and Louvre Accords), or whether the currency moves are driven by the changing economic circumstances is impossible to know. But the shifts are happening and will have an impact.

Janet Yellen is, in my opinion, playing a dangerous game, willing to accept higher inflation in the expectation that she’ll get a payoff in the form of better growth. That tradeoff isn’t nearly as neat as she seems to think. These big and fairly rapid moves in the dollar and commodities are destructive and hard for businesses to navigate. Lower oil prices haven’t been the boon everyone believed, something that doesn’t surprise us and shouldn’t surprise anyone who’s heard of the permanent income hypothesis. And higher prices won’t automatically restore the shale industry either as it isn’t just a matter of turning the spigot back on.

Capital is flowing back to emerging markets as the dollar weakens and concern about dollar debts subsides. But recovery in those economies is not just a matter of rising dollar prices for commodities. They need someone to sell their goods to, a health US economy being a primary necessity. And that is far from assured if the commodity rally continues. We don’t have much experience with lower oil prices causing recessions – the mid-80s boom and bust was at least as big as this one and we didn’t get a recession from that one – but higher oil prices are very different story. A spike in oil prices before recession seems almost a requirement. 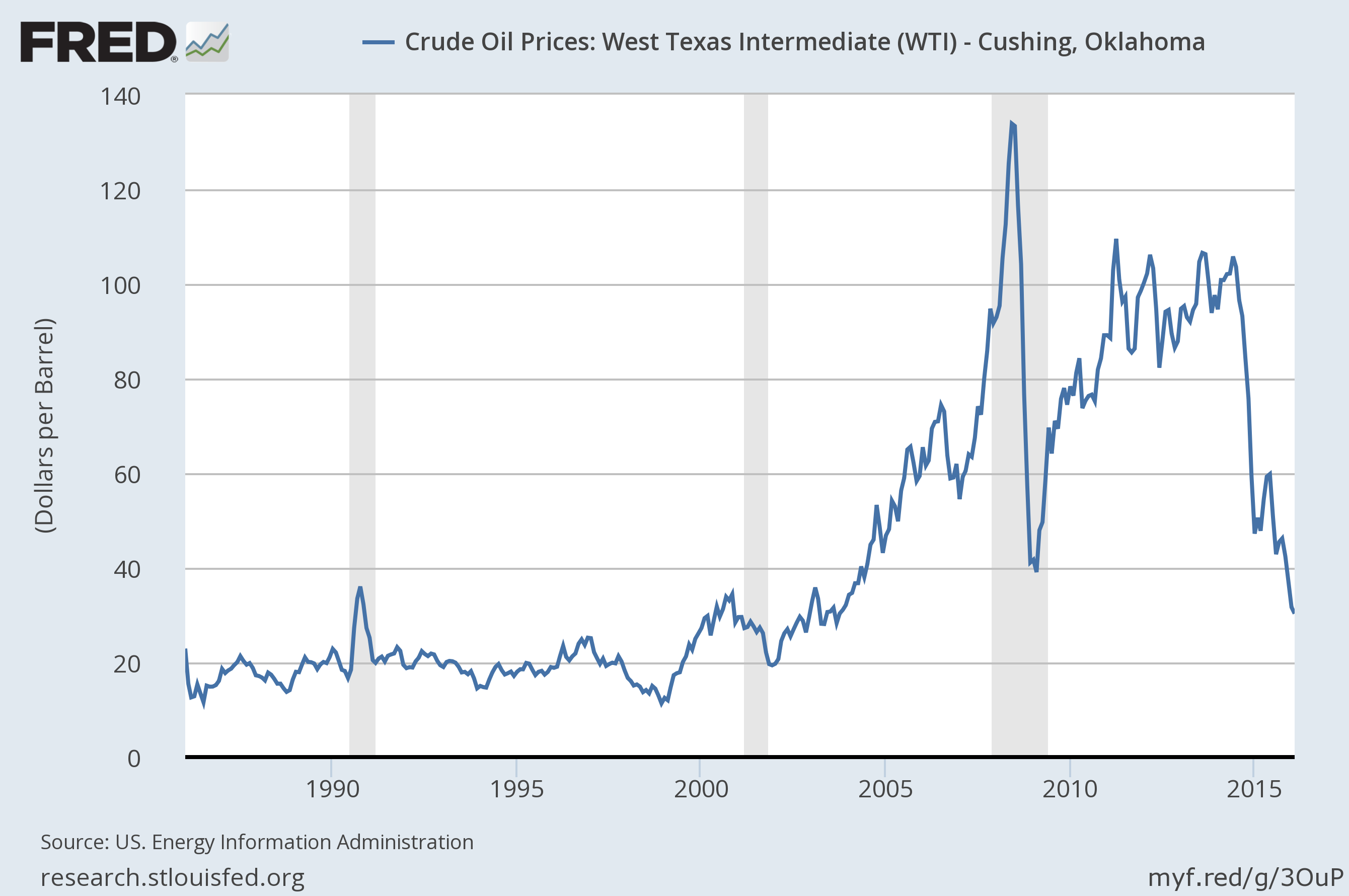