The (Non)Appeal of More Debt

The (Non)Appeal of More Debt

While continuing to tout an economic recovery that is being missed by far too many, the government and economists say one thing and then move toward the other. The unemployment rate claims one economic version that is talked about openly, but then there are “little things” that various official capacities seek to carry out suggesting they realize full well the discrepancy. The most obvious is the FOMC’s reluctance to do much more than talk about rate hikes.

In the US, there hasn’t been the same growing favor to revisit fiscal “stimulus” as elsewhere but that isn’t to say there isn’t any activity.

President Obama’s economic advisers and outside experts say the nation’s much-celebrated housing rebound is leaving too many people behind, including young people looking to buy their first homes and individuals with credit records weakened by the recession.

In response, administration officials say they are working to get banks to lend to a wider range of borrowers by taking advantage of taxpayer-backed programs — including those offered by the Federal Housing Administration — that insure home loans against default.

On the surface, it seems as banking had gone from being too far forward during the housing bubble and lending skewed way too much toward NINJA to now the opposite in being far too strict. Governments, as always, want it both ways as if it could possibly divine the difference – to have quite robust lending but without any tomfoolery. To move the pendulum back, part of this new push is being undertaken by the Justice Department, as if the law bureau fits within what is clearly “clogged transmission” of monetary policy. The reason for that is certainly a relic from the housing bust, as the Obama Administration is using Justice as a platform to assure banks that there would be no legal repercussions if another housing bust came around again. It’s not quite a “get out of bubble free” card, but perhaps as close as there will ever be offered.

There are a lot of assumptions, however, being made on the part of the government to appeal again to housing. The first is, as stated at the outset, that perhaps the recovery and the current economy may not be what is claimed. In more raw policy terms, they assume that banks aren’t lending so robustly, especially when compared to the pre-crisis era, because of lingering legal concerns and again overly strict lending standards (as is typical in any asset bubble cycle reversion). I would disagree on that count especially as banks have been hindered more so by monetary conditions (not policy) than affinity for changes in legal potential. In other words, they have more pressing problems in the eurodollar (and what that means for asset capacity in the first place) than worrying about some distant date with Justice Department immunity.

There is also the other side to consider, meaning that perhaps the US household sector may not want to borrow in the first place at least within this current economy as it actually exists. There are also lingering financial factors that have built over the decades, all tracing back to the asset bubbles as more than just volatility in prices but more so corruption in systemic behavior.

By and large, the US household sector’s proclivity to take on debt has exhibited a fairly close relationship with the asset side; that only makes sense as human nature even in the most debased of times is relatively cognizant of deeper balance. 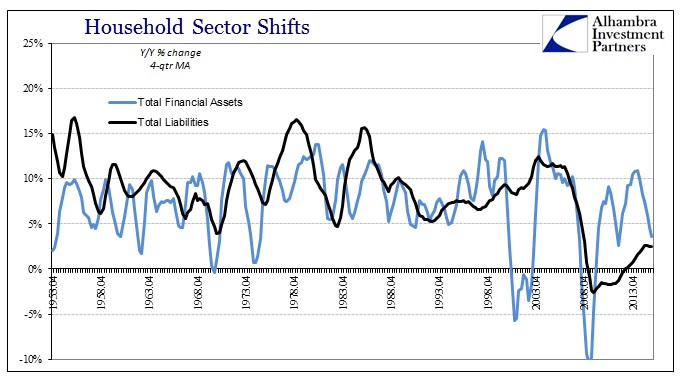 As you can see above, that relationship changed in the aftermath of the Great Recession and panic. Whereas household financial assets have rebounded at least somewhat on the strength of stock prices (re-bubble), US households have not borrowed in nearly the same capacity. Only recently has debt started growing again and even that has been historically tepid. 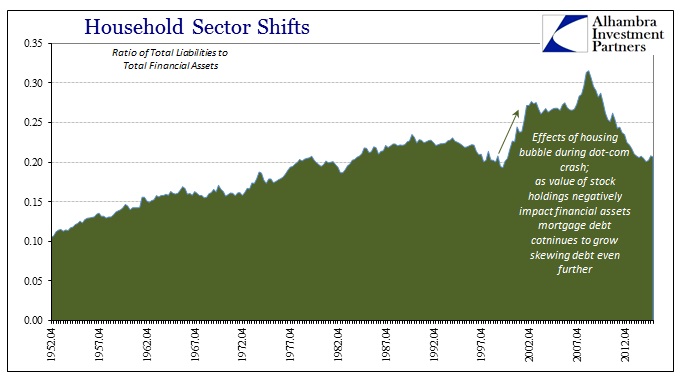 Debt had been growing in relative proportion to the asset side all throughout the post-war period, and the chart above does not include the value of home equity as a base asset. However, that relationship supposes substitutability among and within asset classes that may have been stretched only too far. That might have been true in the perceptions of households at one point, but it seems as if the issue may explain in some good part the reluctance to re-lever over the past few years.

Before the 1980’s, this relationship between household assets and debt was driven primarily by more liquid and less risky assets. As households during the Great Inflation accumulated more debt, they also added disproportionately to their stock of liquid savings – matching borrowing against cash and equivalents such as deposit accounts and money market funds. 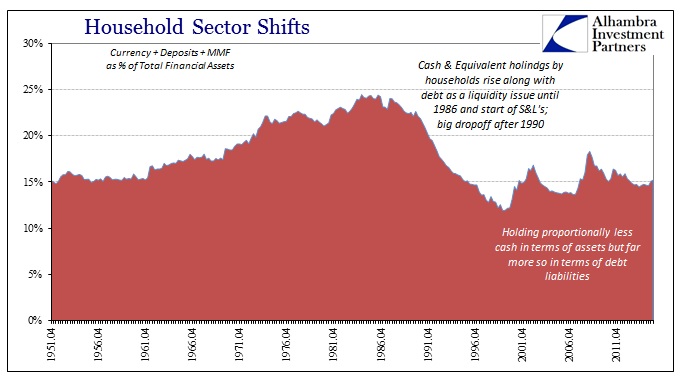 Around 1986, the asset composition started to change away from cash. The timing is relevant as it occurs during the S&L crisis which affected deposit balances primarily among households. The worst of the S&L period, toward its end in 1990 and 1991, saw households actively draw down their most liquid holdings. 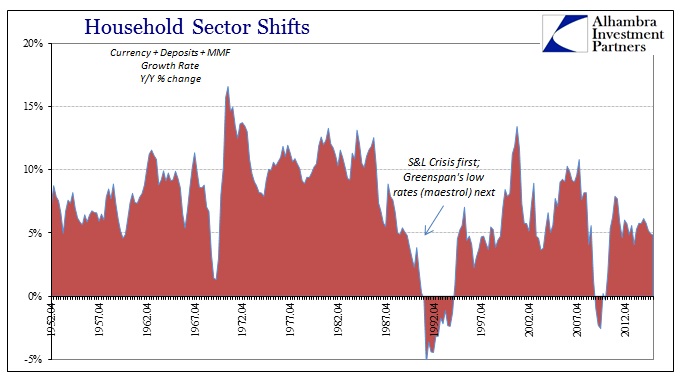 It wasn’t just the banking difficulties that drove this shift, as the biggest drawdowns occurred during Alan Greenspan’s first experimentation with interest rate targeting as an anti-recessionary device. As he dropped the federal funds rate and other money market rates followed, the household sector moved assets elsewhere. That included a shift into the next rung or tier, meaning credit market instruments especially UST’s as a somewhat liquid alternative to cash (the first of “reach for yield”?). 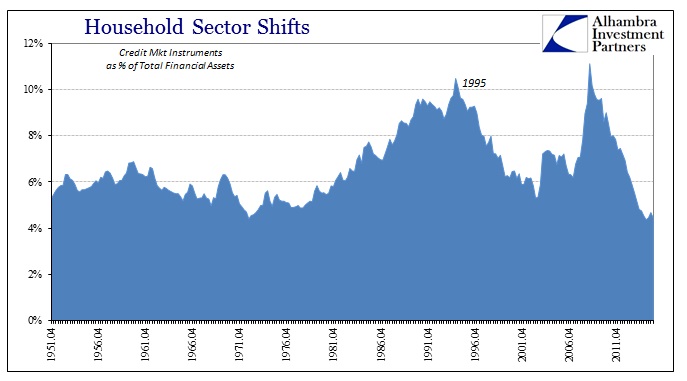 That all changed around 1995 as the US household sector shifted again only this time in the direction of price-sensitive assets especially corporate equities. Household balance sheets had been similarly affected by rising stock prices in the 1960’s, the difference in the 1990’s was that shifting basis was now the primary foundation for taking on additional debt. 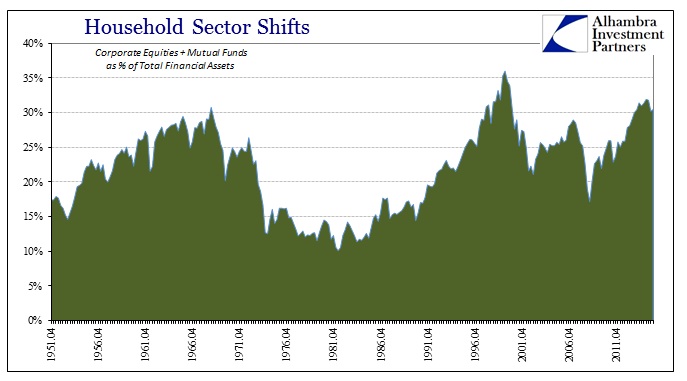 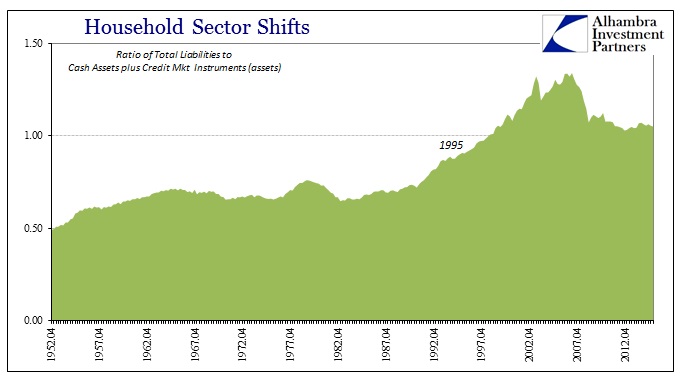 That left households especially past the middle 1990’s as taking on primarily mortgage debt no longer in relation to cash or even the most safe and liquid assets; credit accumulation was being driven strictly by asset prices. Leverage had become not just a bubble property but a real economic derivative of it. The fundamental relationship between sound balance sheet positioning had been altered so that price sensitive assets were treated the same as liquid assets in determining household credit appetite. For some time, that seemed to work as asset prices went further and further, only deviating once in the dot-com crash which was already bolstered by the ascension of the housing bubble.

Liquidity, net, in asset prices is not at all the same as actual liquidity, especially when it was just assumed that the prices counted concurrently at the time of borrowing would be in place throughout or when needed. The disaster of the housing bust, then, was to illuminate the illusion of the asset side imperfection. There is a world of difference between holding debt based on price-sensitive assets subject to massive reversal and the historical relationship that had supported debt based on solid asset holdings like cash. This liquidity disparity is still, to this day, quite severe, and has yet to come close to normalization. 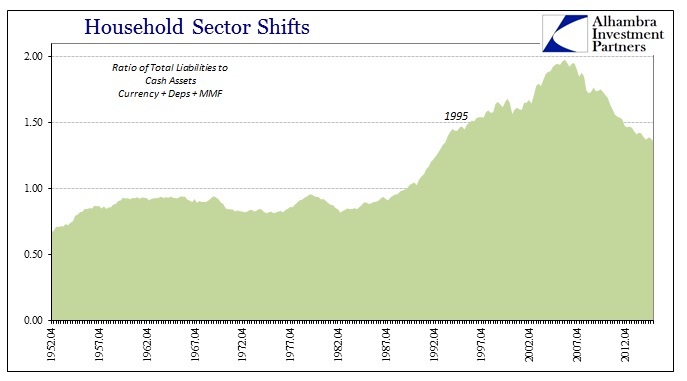 There are also hidden factors to consider, as well, including stratification in both borrowing and holding of assets. In other words, those doing the borrowing may not be the same as those holding the full range of assets. There is good anecdotal evidence to suggest that it was the bottom tiers of American households that more radically shifted debt perspective since the late 1980’s, becoming far, far more enamored with stock and housing prices than the upper tiers who maintained a more liquid stance (relatively). Whereas the lower levels of the income spectrum had once eschewed debt altogether because they had little assets at all, they were now fully participating (if not more so) based solely on 401(k) balances and comparable home sales among only their neighborhood flippers. That would mean a good part of this generational shift toward debt was based on asset prices alone.

I think that explains why there may be continued reluctance against debt on the part of households to begin with, only some of which might be relevant right now in terms of lending standards that subject potential borrowers to more fundamental and holistic analysis along these lines. The debt imbalance is still highly imbalanced and without an actual recovery there is no reason to believe that US households will suddenly embrace debt again as they once did for far too long – based on the worst possible asset side foundations. I have little doubt that is the reason this third round of asset bubbles in household net worth has been revealed as so highly inefficient; asset prices rise again for a third time but it doesn’t lead to economic activity as the debt-transmission channel of monetary policy is clogged by reversion in all these prior shifts and behavioral changes. 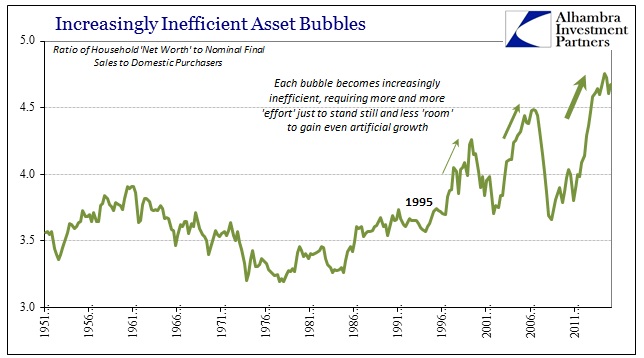 Having been burned badly in the last one, Americans don’t seem eager to go that far back into debt without the actual income of a true recovery as its basis. It produces the Catch-22 of current cycle “stimulus” – policy expects that increased borrowing will result from low interest rates alone, and that will lead to more jobs and thus more borrowing and then more jobs again; households are instead waiting for the jobs and actual income gains first before borrowing and then leading to more jobs. Without the borrowing at the front as policy expects, there just aren’t any jobs (at the margins), so it isn’t surprising to find so little actual borrowing and repeated failure in “stimulus.” Over the long run, that would be a terrific result if it weren’t for the continued disruption of especially monetary policy that will not get out of the way of a real recovery. The potential is there, only central banks will not accept any recovery that doesn’t come from financial factors first. Therefore, they keep appealing to debt even when nobody (on the household side) but policymakers seems to have a place for it.