As If We Needed It, Asian ‘Dollar’ Might Be More Complicated, Too

As If We Needed It, Asian ‘Dollar’ Might Be More Complicated, Too

A few weeks back, on March 18, the Japanese government bond market was hit with a “buying panic” of some noteworthy proportion. Yields all across the curve dropped, which takes some doing since yields were already at that point mostly negative. Common sense forces any sane person to wonder if sanity itself remains relevant to global finance:

That raises the question as to who in their right mind is buying 10-year bonds at -10 bps? And why are they continuing to do so?…

The answer is the huge discount to “borrow yen”, meaning cross currency basis swaps. The negative premium was again at a record high in this trading, which means that investors only need a safe haven to park their “borrowed yen” while they pocket a huge spread on the swap. Who is making out in all this? Anyone with spare “dollars.”

This is one of the primary problems for the uninitiated to delve deeper into the arena of wholesale global finance, and thus question what the real global reserve currency actually is and does. There is a mishmash of terminology that depends in part on tradition and history no longer really applicable. You see it all the time, as some central bank like the PBOC will be reported as “buying yuan” or “selling dollars”, where those terms are technically correct but functionally distinct.

In terms of yen basis swaps, those looking to “borrow yen” aren’t really doing so as their primary purpose but really as the last leg in an arbitrage trade in their favor. They own something, or at least show the right sort of positive number in systemically acceptable fashion, that is in great demand and there are only so many ways to “cash in” (to utilize another ill-suited phrase to this behavior).

There was a “buying panic” in JGB’s that day because basis swaps were falling to an even greater record low spread, meaning absolutely stunning profit potential for anyone with not dollars but “dollars.” There is an ongoing and increasingly desperate shortage that commands just the kind of premium that could fund hedge fund outperformance (or some bank desks’, if they actually had some spare risk budget, which they don’t, clearly, as that is the whole ballgame here) for 10 years. That is why anyone able to post those “dollars” would be interested in a negative yielding 10-year JGB. They are not borrowing yen but accepting it as the standard of exchange in this cross-currency delivery; and then finding the relatively best place to park it while they collect the huge premium on their “dollars.” 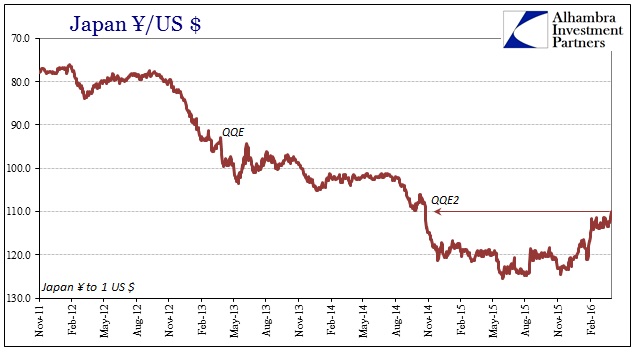 I don’t believe it coincidence, either, that all that occurred in that week since it looks increasingly like the rebound after February 11 at least paused, then if not potentially beginning the process of once more reversing. There are any number of indications that suggest as much already (subscription required), not the least of which is the upcoming three month anniversary of January 9 and the PBOC’s return to pegging CNY. In undertaking that operation, continuously, it seems, the Chinese central bank is not “buying yuan” and “selling dollars” but writing forward cover so that Chinese banks might increase their own “dollar short” (to use yet another confusing term) on its behalf.

Upon maturity of those forwards (and other wholesale trades and expressions) the central bank has a decision to make; let them expire and let market “dollar” conditions once more set the agenda or roll them forward again. It is not a neutral proposition, as engaging in wholesale tactics creates many problems for any central bank, especially the general inefficiency by which these methods take (particularly if recent estimates are any indication, the PBOC has been extremely inefficient and thus has created a huge imbalance and headache for its future self, an imbalance that if it gets large enough could take the decision right out of its hands like August 10). As the three month period rounds into view, then, we should start to expect CNY to exhibit “devaluation” pressure again. 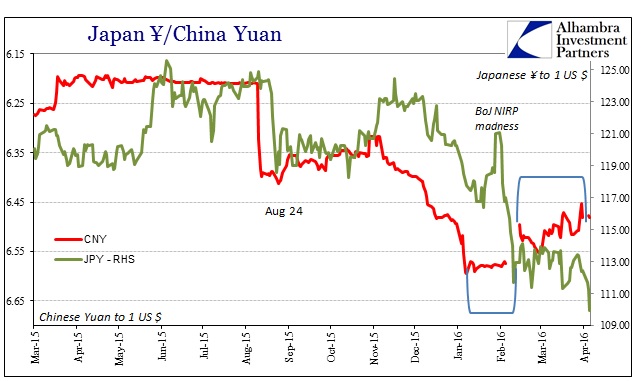 To this point, it has not; though JPY certainly has. Though it may yet be too early to determine, the sudden split among those two currency indications could be a very important distinction as I outline here (subscription required). The fact that CNY is so far sitting out the potential “turn” does not necessarily propose, however, that the PBOC is. In fact, there is good evidence that it has been itself quite busy.

The Chinese central bank is in many ways different than other major monetary agents, some of which is undoubtedly due to the overtly statist system it was created to service. Whatever the ultimate cause, the PBOC operates with an unusual dedication to precision that far exceeds the more rough factors employed by Western central banks. I often refer to one passage in the FOMC transcripts from September 2008 to illuminate this point, not just in how I think it displays this tendency on the part of the PBOC but also because it offers just the right sort of juxtaposition on just this topic:

NATHAN SHEETS, Staff Economist, “Yes. Yesterday the PBOC cut its main policy rate 27 basis points. I guess they felt that 26 would not have been enough and 28 would have been too much. [Laughter] And 27 was just the right number. I’d say a couple of thoughts were there.”
RICHARD FISHER, “Thank you.”
CHAIRMAN BERNANKE, “Three is a lucky number in China. Don was going to tell you that 3 cubed is 27.” [Laughter].
DONALD KOHN, “He was also going to wonder, Mr. Chairman, whether we needed to harness the mystical powers.” [Laughter]
CHAIRMAN BERNANKE, “I think we have good feng shui here.”
MR. SHEETS, “The science of monetary policy.”

This is one of the most embarrassing discussions in FOMC history, which is truly saying something given that the Federal Reserve’s past is an unending string of them. The FOMC was meeting on September 16, 2008, which should be immediately recognizable as an important date to anyone who lived through the deluge – it was the day after Lehman Brothers and only two weeks to general and global panic. Here was the FOMC ridiculing a foreign central bank as it tried to navigate great financial difficulties that were initiated in a foreign system that was supposed to have been completely immune to just these sorts of problems because of the claims made by the very people at that moment doing all the laughing.

The PBOC was running calculations that claimed 27 bps because the FOMC had no idea (and still doesn’t) that the world ran on a credit-based reserve currency (“dollar”) rather than their useless dollar offerings. I make no judgment on that calculation or the attempt, as my only purpose is to offer an example of their kind of operational tendencies. 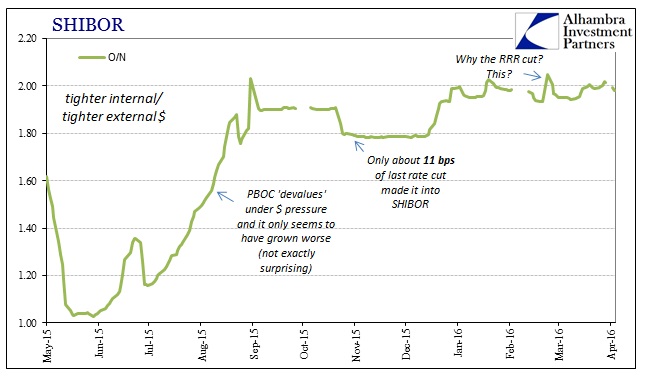 What you notice about those jogs or small jumps up to and above 2% is that they roughly correspond to periods of CNY appreciation. This is a similar relationship to what we observed last September and October, only at that time it was CNY appreciation seemingly triggering CNH HIBOR (offshore RMB) jumps. The obvious difference may be onshore vs. offshore yuan, but in the realm of what we are discussing here it is all “dollar.” 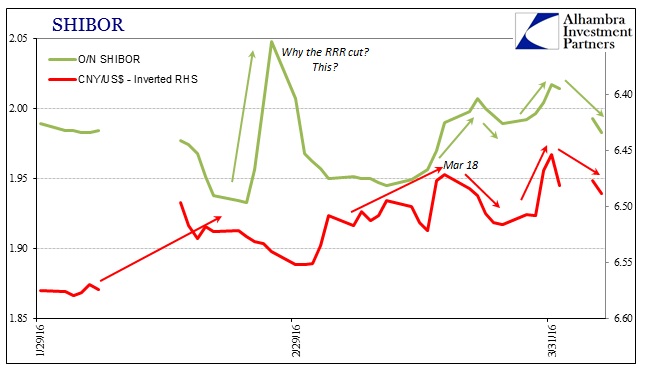 There are several important clues as to the possible relationship, starting with the biggest move after China’s Golden Week in early February. The PBOC fixed the CNY exchange upward all way to around 6.50 from around 6.57 where it had been pegged for several weeks prior (during the global liquidations). A little over a week later, SHIBOR shot up past 2%, which then was met by the last 50 bps cut in the Chinese bank reserve requirement (again, seemingly suggesting their unofficial distaste for 2% O/N). Since then, O/N SHIBOR has pushed past the 2% mark on two additional occasions, both preceded more closely by significant appreciation in the CNY exchange – the middle one of the three peaked curiously right on March 18, corresponding to the start of the next jump in SHIBOR to just under 2%.

It is important here to issue the same caveats that always apply when trying to interpret and analyze these eurodollar or “dollar” signals – these are not direct observations, thus amount to (hopefully) reasoned speculation. To my view, what these suggest is the PBOC attempting to continue interjecting artificial calm but the overriding nature of the wholesale problem causing negative feedback. In other words, the PBOC may be trying to push too far upward on the CNY exchange while simultaneously offering some non-market wholesale “dollar supply” (because pushing the exchange rate up is the same as limiting Chinese banks’ ability to freely bid on “dollar” rollovers) but never quite enough to keep it hidden and stable; instead, like September and October, this forced imbalance breaks out into RMB illiquidity even in these kinds of smaller (relatively) doses. It may even contribute to “dollar” imbalance elsewhere around Asia (and the rest of the world, for that matter).

It is at least one possible explanation as to why JPY would be breaking into all sorts of dubious trends, including JGB’s and basis swaps which only indicate big and growing “dollar” problems, while CNY remains so far conspicuously well-behaved. It’s a long way of stating that, like the eurodollar system itself, the Asian “dollar” isn’t monolithic, either. Unfortunately, it makes interpretation and analysis that much more frustrating and difficult, but also quite necessary because in the end, as I wrote above, it may matter a great deal. I believe it did in the last episode as October turned to November – only that time it was China almost alone as the epicenter of the Asian “dollar” with JPY trailing. It’s bad enough that China may be experiencing a “dollar” storm, as the world is finally realizing, but what would that mean if they have now spun off another onto Japan?  It is, as I will clarify again, far too early to make that determination but it does bear continued interest and scrutiny as one new possibility to keep in mind as we cycle through again.