Whenever the topic of recession comes up, the mainstream and especially economists (redundant) become quite defensive about the possibility. Just a few days ago, presidential candidate Donald Trump claimed the US was headed for “a very massive recession” and that it was “a terrible time right now.” The Washington Post, as you would expect, was skeptical of the claim because orthodox economics will have none of it, writing that Trump is “embracing a distinctly gloomy view of the economy that counters mainstream economic forecasts.”

While the Post was serious in its counter, they should not be so confident given past history of mainstream forecasts, economic as well as anything else. As retired Dallas Fed President Richard Fisher correctly pointed out (at least in all likelihood), the staff at the Fed was put to shame by his dry cleaner. Still, part of the problem is lost context in that nobody actually seems to remember what recovery and growth is truly like. We see story after story claim that the economy is strong or consumers resilient when whatever economic account bears no resemblance at all to past occurrences of “strong” or “resilient.”

The issue of recession, however, is only somewhat separate. Because of this reduction in standards, the mainstream accepts only a binary proposition anymore – the economy is either growing or it is in recession. Further, any economic circumstance that doesn’t fit the traditional pattern of recession is then used to confirm the interpretation that there cannot be recession. 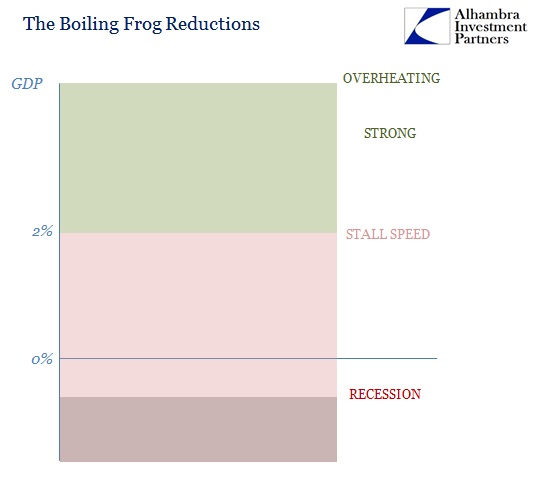 It used to be convention that 2% GDP growth represented an intermediate danger zone akin to “stall speed” in aeronautics. Now, as we traverse past and even out of the “new normal”, 2% GDP is somehow used to justify “overheating.” Because labor market statistics are so robust, the balancing act to GDP must be the same even if the very definition of “overheating” has to be reduced to what at one time was universally accepted as dangerous. 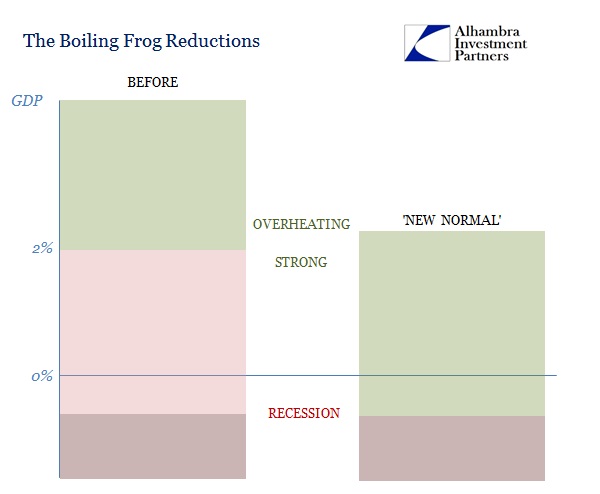 After more than a year of negative numbers especially in manufacturing and industry, because there is no “V” to it that is believed confirmation that it is just some marginal weakness to be dismissed via a resilient baseline or trend that will reassert itself given enough time. This discontinuity to the normal, historical business cycle pattern is being used as evidence for the economy remaining in growth mode when it should be instead forcing re-evaluation of what we know of the whole contraction process.

“Politicians and market experts keep saying the economy is trouble, but the data keep telling us that is just not the case,” Joel Naroff of Naroff Economic Advisors said.

“Those who downplay the economy’s strength should really just quit the exaggeration, trying to scare the already angry electorate into putting themselves into office,” Rupkey said. “Just quit it.”

“The economy is stronger than you think.”

It becomes the proverbial boiling frog, as long as there are some positive numbers they are made out as if they count for “strong” because the business cycle clearly has not occurred. No matter how much growth slows in whatever account, as long as there is no “V”, whatever positive number is pushed out as that binary narrative – the economy today can only be classified as “strong” or recession; nothing in between is considered and thus there is no possible way (for economists) to accept that we might be in radically new circumstances. If you actually go looking for “strong”, you instead find the economy long ago found itself in the boiling water. 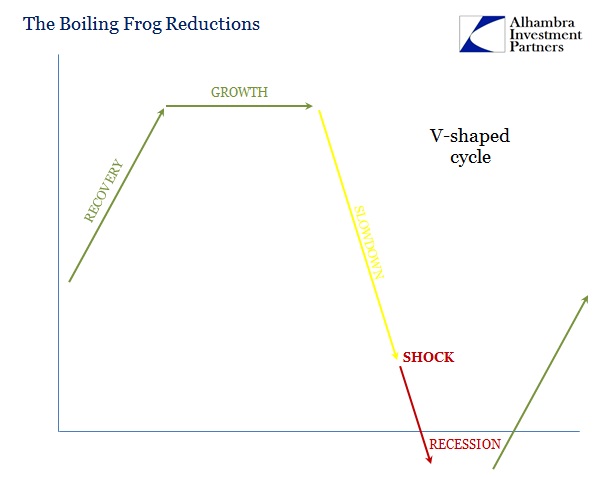 What we see of the past few years leaves no doubt on that count. It certainly is not the usual business cycle by any means, but that doesn’t immediately equate to sustained growth. The very fact that the “new normal” was accepted years ago already suggests something different; economists just assumed that was a stable state of low growth that could be passed off under today’s reduced standards as “strong.” What we find, however, is that such growth was never actually established; it was, however, low but getting lower all the time. This did not mean it was a straight line from what was of the recovery to contraction, as it is the uneven and lumpy nature of “cycle” that gives the mainstream interpretation its seeming plausibility. 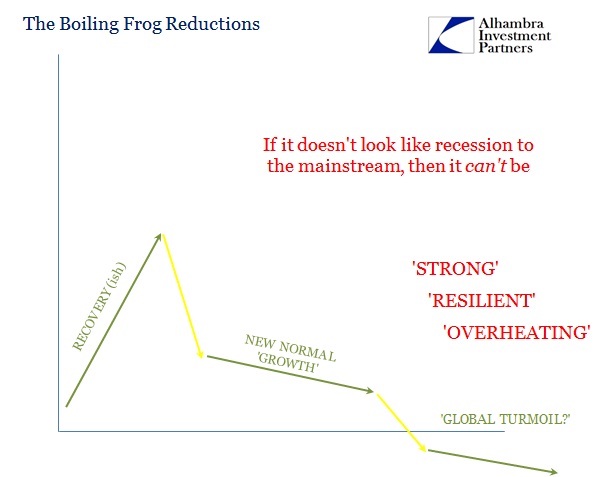 Starting with 2009 and 2010, the recovery was soon underway in noticeably asymmetric fashion, which should not have occurred based on the depth and scale of the Great Recession. It was that unevenness that first gave rise to the term “new normal”, and then only a few years after became an even less “new normal.” There was a slowdown in 2012 that produced recession-like conditions (panicking the Fed into QE3 to start with) but again no obvious “V.” The narrative could thus persist only with the now reduced growth rates in so many places reclassified as if that was as good it is got.

Then, starting in the middle of 2014, for “some reason” it all repeated. The “new normal” growth suddenly shrank again, which at first elicited only dismissal (“transitory”) because the new normal was assumed to be exactly that. Even though growth was low by historical comparison, it was assumed stable enough for economists to actually consider inflationary conditions (“overheating”). That proved, of course, to be yet another false assumption so that what was once slow and steady growth has become slow and steady contraction. The trend hasn’t changed at all, which is precisely why the narrative continues without it ever happening.

The economic “cycle” I have sketched out above is not theoretical; it is derived from observation among any number of economic accounts. In fact, the pattern is replicated in so close fashion (and not just in American economic stats) that it leaves no doubt as to the unique nature of these circumstances. 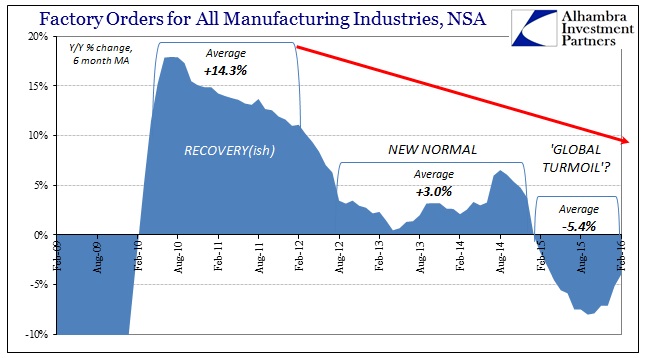 Factory orders, for example, which include both consumer elements as well as capex and business proclivities, started out in stunted recovery fashion. While an average of 14%+ seems quite respectable if not downright strong, it was not symmetric to the contraction that preceded it. From November 2008 until October 2009, a period of exactly one year, factory orders declined an average of 25%. Therefore, even with seemingly robust growth rates starting in 2010, it wasn’t nearly enough to catch up to the prior trend; yielding the first suggestions of the “new normal.”

In 2011 and early 2012 (no coincidence these inflections), that “new normal” again was further downshifted not in temporary fashion (no effects from QE3 are spotted on these charts) to a truly new normal unlike anything seen before – especially in light of the recovery(ish) that started out this “cycle.” In the middle of 2014, this new “new normal” also disappeared and not temporarily, yielding something else which has yet to be given a catchy description (and probably won’t since whatever that would be would have to violate the “narrative” to be consistent with these observations). The most that is admitted is that there is “global turmoil”, but that is just an updated version of “transitory” where economists can proclaim “strong” out of nothing like “strong.” What we find instead is broad-based, global slowdown that has slowed into steady contraction in far too many places even if there is still no “V.”

I could present this pattern in account after account, but I will only do so in a further three: retail sales (consumers), US imports (also consumers but from a slightly different angle that rejects the mainstream dollar interpretation), and US exports (global demand). No matter the account, we find no “V” but also that the “new normal” was just an illusion, as the economy was never that stable but rather almost assuredly on a slight, but dangerously persistent, downward slope this whole time. 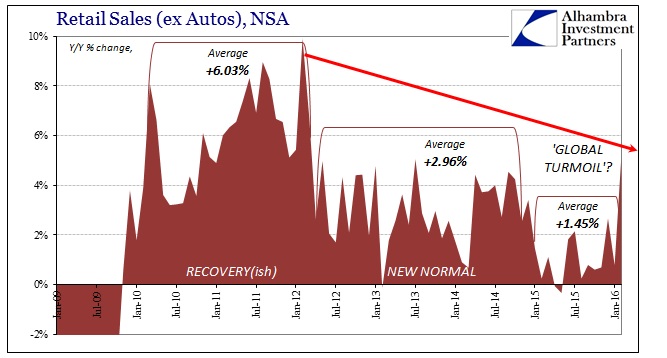 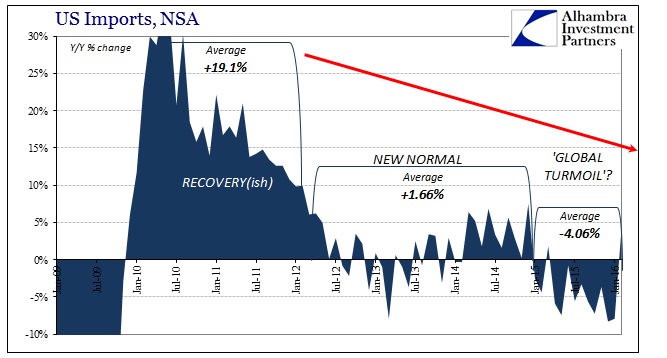 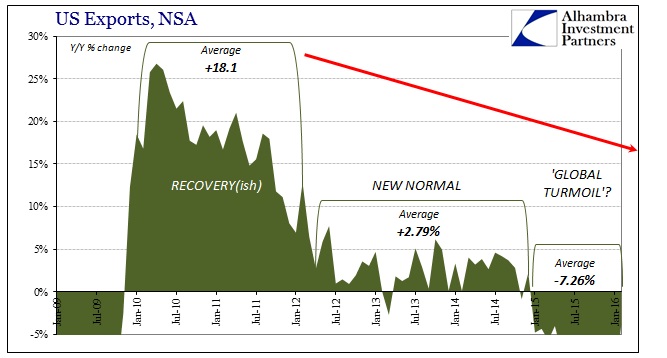 Because there is no obvious recession, only unexplained (to the mainstream and economists) slowdowns, nobody feels the boiling water; Janet Yellen can still claim recovery because there isn’t anything by which the NBER or other mainstream outlets will figure and then declare a hard “cycle peak.” Her claim is further bolstered by blind faith in the one account that resists this economic pattern. The labor statistics are the only place you don’t find these three phases of the slowdown that will not stop slowing down. 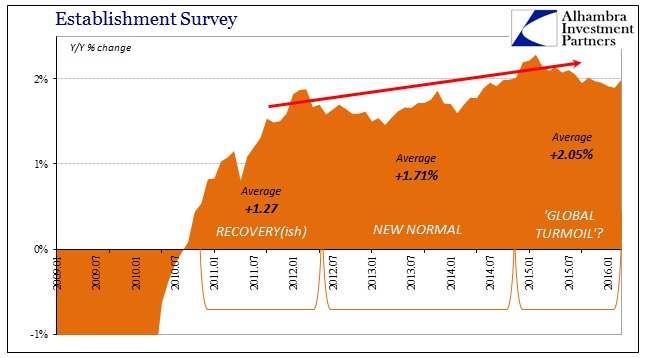 It is an obvious inconsistency that demands explanation but will never get one because everything else is dismissed while the Establishment Survey and unemployment rate are taken as conclusive even if they are fully isolated in that view.

However this economy may ultimately be classified by historians (and pop culture) at some future date, what is relevant now is that “strong” does not apply anywhere (other than the irrelevant payroll stats). Because this is unique to our experience, it would be naïve and imprudent to use past expectations by which to judge especially the economic (and financial) dangers that are certainly contained within this years-long slowdown. That is, I believe, ultimately the conclusion; this is like not a cycle at all, but rather a reckoning to the weakened economic base or foundation that has existed during the entire eurodollar run. It is certainly not recovery, as it can’t be; it isn’t even the “new normal” anymore.

Even “secular stagnation” is being proven incorrect as that idea, too, suggested stability that just never existed. Economists only thought it did because, like the boiling frog, the slowdown was too slow for them to do anything but reduce the standards for “strong” and “overheating.” They posited that global economic potential had decelerated after the Great Recession and that would explain why “stimulus” never lived up to expectations. As it seems to be turning out, that idea was at least thinking in the right direction (if for the wrong reasons) just not far enough; global potential might actually have been falling the entire time and there is no “stimulus” in the world that can stop it.