China’s official reported reserves rose in March for the first time in five months. Though reserves had fallen to barely $3.2 trillion in February, that was down just $28.6 billion from January, being already hailed as a success and a step in the right direction since that was less than a third of the shocking decline in January (-$99.5 billion). The increase in March was small (+$10.3 billion), but given the months preceding it that was enough to really unleash “the narrative” especially since it was assumed as continued improvement two months running.

Capital outflows from China have moderated, according to recent official data, in part helped by expectations the Fed will slow the pace of interest rate rises this year. Federal Reserve Chair Janet Yellen’s comments last week that the U.S. central bank should proceed cautiously in adjusting policy have caused a broad-based retreat in the dollar…

The central bank reported its net foreign exchange sales fell sharply to 228 billion yuan ($35.2 billion) in February, down from 644.5 billion yuan in January, a sign of decreased government intervention in support of the yuan.

There isn’t anything in those quoted paragraphs (or the entire article, for that matter) that I agree with. First and foremost, there is absolutely no awareness that this is simple repetition – and almost exact repetition at that. It’s not enough to realize that we have seen this before, but the last three months are an almost exact replay of August-September-October. 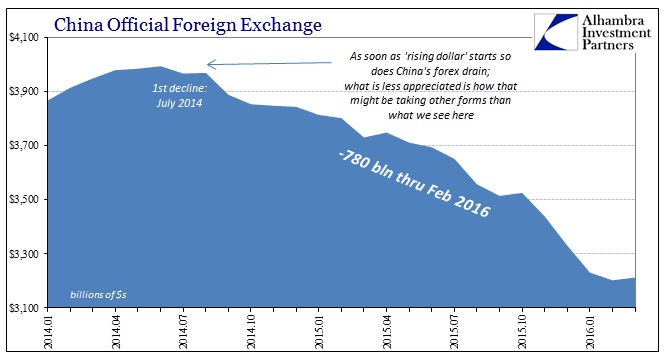 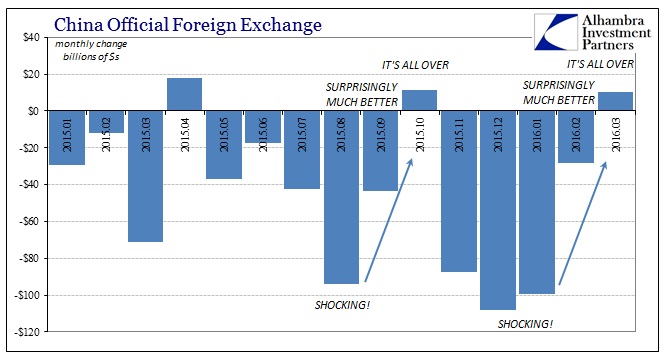 China’s massive foreign-exchange hoard rose in October, snapping a five-month streak of capital outflows in a development that could help Beijing shore up the value of its currency.

The rise reported by the central bank on Saturday follows five consecutive monthly declines. It indicates weakening investor expectations of a depreciating yuan and Beijing’s successes in stemming the outflow of illegal money transfers out of the country.

None of that was true, and in fact started to reverse only days after the article was written and published. It led then to the same end result as what had been witnessed in August – global liquidations tied to immense “dollar” stress and shortage. The “cycle” being repeated in the three months January thru March is actually not the first instance of repetition. Going strictly by the official forex data we find the first such “cycle” occurring unsurprisingly starting with March/April 2015. 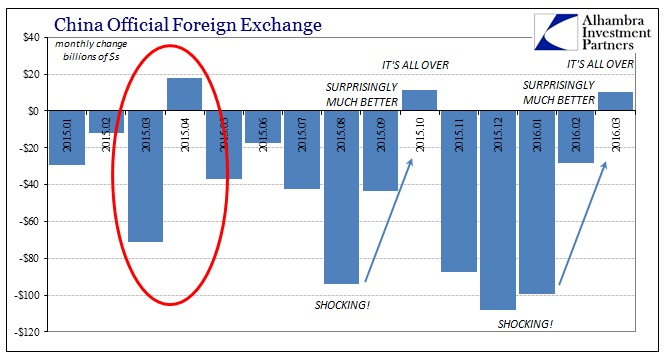 There had been the same “shocking” decline in official forex last March, -$71 billion which was a record to that point, and then a “surprise” rebound in April (+$18.1 billion) that seemed to accompany much better conditions on the surface. Prior to the April “inflow”, the Chinese yuan exchange with the dollar had been depreciating and in worrisome fashion. In the middle of March, the CNY exchange suddenly stopped doing much of anything. 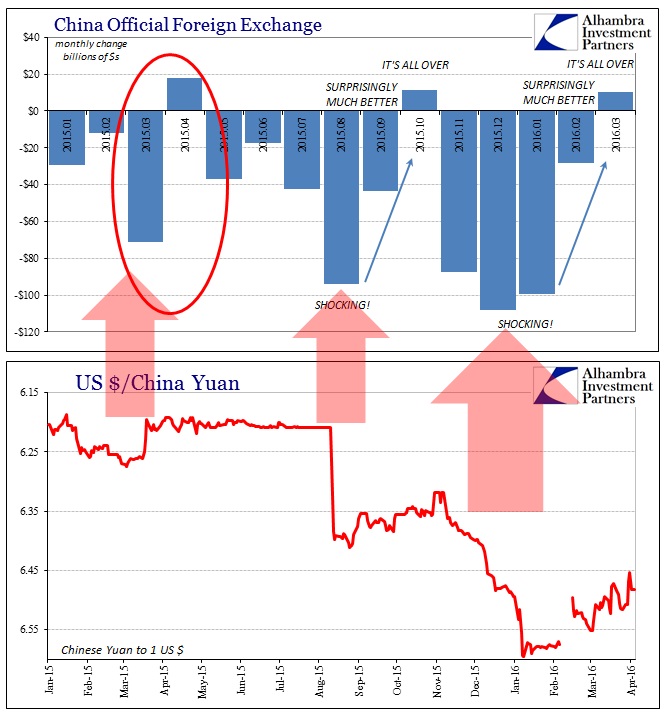 We find that increasingly drastic “devaluation” matches up perfectly with the most intense monthly “outflows” in the official forex reporting. August was bad but the three consecutive monthly declines starting last November indicate amplified stress which matches the outward appearance of intensifying and spreading liquidations in January 2016 as compared to August. Already that suggests not “outflows” but Chinese monetary policy being entirely reactive to overall “dollar” conditions, trying as best as it can to fill a “dollar” funding gap by whatever means at its immediate disposal and faring very poorly (not that they have much of a chance to do otherwise).

The suggestion of any “other means” is what is most important, a clue we find in this very repetition. I have no doubt that the PBOC has been writing forward cover in these times of very acute funding pressure, which leads to nothing more than maturity transformation that shows up as these very well-defined cycles. 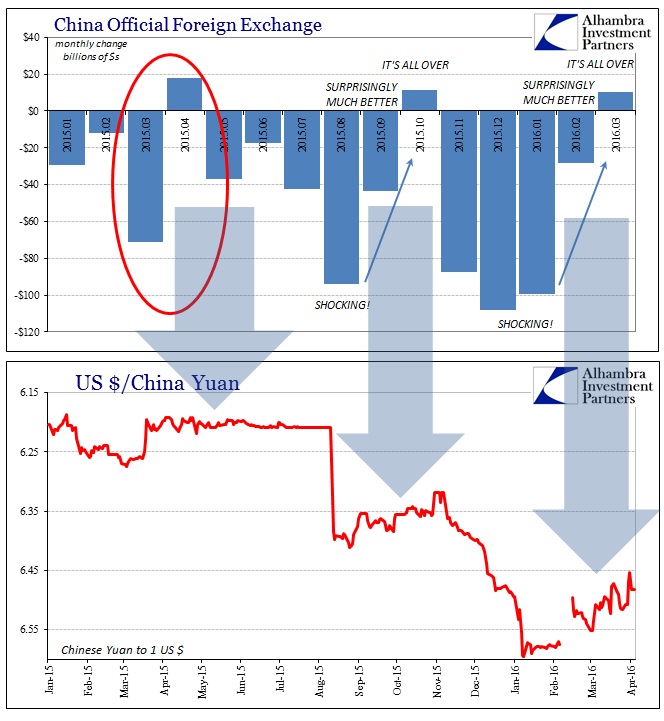 In these months where official “outflows” appear much better and even positive, the CNY exchange rate either loses all volatility or actually starts to appreciate. That can only by a determined switch from the central bank “selling UST’s” in immediate fashion to forward selling of “dollars” using any number of wholesale tactics which lead only to the future start of the next cycle. The 3-month intervals (or thereabouts) are the final piece of evidence.

What we don’t know is the intensity within each of those cycles (on either side; how bad is “dollar” funding to start with, and then how much does the PBOC bluntly respond?) though we can make some reasoned inferences just by what we find here. We also don’t know the timing of each of these “windows” where maturity of past efforts starts to overwhelm current efforts and even contribute to the one constant through it all: as noted by the starting month for this forex reversal in China, July 2014, this is and has been nothing but a “dollar” problem. China’s own economic circumstances are both tied to this imbalance and reflected in its variable intensity, no doubt, but this is the “rising dollar” the world is trying desperately to manage – and failing.

Nothing goes in a straight line and that includes the “rising dollar.” No matter what, the mainstream takes every small variance (in economic data, too) as if it were conclusive proof that central banks are winning and asserting control – even though it never actually happens for more than just these repeating cycles. The very fact that we see clear repetition like this demonstrates that nobody in the media seems to be paying much attention, and is actually actively trying to find and claim central bank success no matter in whatever small measure. Economics is not science; it is anti-science as it starts with the premise of what “should be” so that it must dismiss “what is” even when “what is” could not be more open and obvious.