Off By A Factor of Two, Maybe Even Three

Off By A Factor of Two, Maybe Even Three

You can always tell what kind of monthly variation any economic account provides from the commentary by which it is described. And there are, apparently, only two options: upward variations mean stimulus is working; downward variation just means that there will be more stimulus. Even by this crude cipher, you can still discern the state of the economic world since the months counted as “there will be more stimulus” far outnumber the alternative.

The very fact that references to “stimulus” of any kind remain the primary topic after years and years of it is all you really need to know. The slowdown that began in late 2011 and early 2012 has been entirely impervious to any “stimulus” no matter how uneven either has been and will continue to be. The reason is relatively straightforward, having to do with all that prior “stimulus.”

China, as elsewhere around the “emerging” world, experienced perhaps unprecedented monetary and fiscal interference during this cycle. In terms of credit and banking, what the Chinese put in place rivaled and likely surpassed our own bubble experience. Again, all that was built with debt and financialism of various forms, some of which I suspect we have yet to fully appreciate and understand.

All that credit and debt was created under far different cirumstances, however, meaning that when borrowing commitments were made, bonds sold, and direct investment put in place the assumptions that supported those financial endeavors were, too. At the end of 2010, for example, Chinese retail sales jumped to +19.1%, which was a significant improvement from +14.7% in March 2009 near the trough (which was only one two-month period at 11.6% Jan-Feb 2009). Credit activity that was enacted then was done under expectations that Chinese economic fortunes would resemble the pre-crisis era, which the 19.1% retail sales estimate suggested. The recovery would be as the word described, and the first few years of it, on the surface, seemed confirmation of those cyclical expectations.

It was like that all across China’s economy, as it appeared to be weathering the Great Recession quite favorably. That was especially true during those first few years where the term “new normal” was increasingly applicable in the “developed world.” In other words, as much as there had been growth disparities in the pre-crisis era in favor of EM’s, it was assumed that would be even more the case as the sluggish recovery in DM economies left them totally behind by the EM’s and especially China with all its “support.”

To find, then, only a few years later where all those economic and financial assumptions were being seriously challenged could only mean serious financial challenges moving forward. That was the slowdown’s first major impact, to cause the first trends of re-evaluation in credit and debt. Whereas retail sales were only slightly slower the next December in 2011 at 18.1%, December 2012 was 15.2%. And on and on. Industrial production, which had been at the lower end of the pre-crisis range in the middle of 2011 at15.1%, was soon regularly (April 2012 forward) at 10% or less. These were Great Recession levels in China.

In short, the slowdown was a paradigm shift in economic terms but even more so financial. It may have started by the disparity in recoveries since EM economies cannot actually “decouple” from DM sluggishness, but the slowdown has been entrenched especially in the EM’s because those prior financial assumptions are being proven over time utterly invalid. Nowhere is that more evident than in China’s Fixed Asset Investment, which for most of the GR and its aftermath was undisturbed. Right through until October 2011, FAI grew at least 25% consistently, with a noticeable burst in early 2009 from all the “stimulus.”

Since then, however, FAI shows the financial repositioning in real economy effects. Where productive capacity had been growing constantly at 25-30%, through 2012 and beyond it has only been down, down, down. The current FAI for March 2016 was 10.7% (cumulative growth rate for all months of 2016), which has been cheered in the mainstream as again evidence that “stimulus is working” when in fact it means that past assumptions are still as dead as ever. That means the slowdown can only continue, but economists live in ceteris paribus as if each monthly value occurs in a vacuum.

This is why every time there is positive variance the articles that flood the media are almost exactly the same as those that did before; only the dates and the relative level of slowdown changes. For example, retail sales, IP, and FAI all ticked higher last June from an abruptly dour start to 2015. There were rate cuts and endless talk of more “stimulus” so that when these economic accounts moved upward it was a huge sigh of relief.

The year-to-year climb in industrial output rebounded from 6.1 per cent in May to 6.8 per cent in June, its best reading since December. Economists had anticipated a slowdown to 6 per cent.

Both figures suggest the Chinese economy was picking up speed as the second quarter concluded, even as the equity market began to turn direction.

The resulting interpretation from just one month of figures:

China GDP will grab all the headlines but it’s the data on industrial output and retail sales for June that offer a more forward-looking guide to the economy.

Both suggest an improving outlook for the second half of the year.

We know how that turned out though what was to come was never really “unexpected.” The reason is, again, simple: retail sales may have ticked up to 10.6% in June 2015, but they didn’t accelerate to 20.6% which is what it would take to truly reverse the slowdown. Industrial production was better at 6.8%, but given the differences to what was projected to be of China’s economy years ago it would likely mean 26.8% growth to truly offer enough possibility to interrupt the financial reversal. Credit commitments, especially funded in some capacity by “dollars”, are not in any way impressed by 6.8%. We know that by FAI and especially private FAI which tumbled to less than 7% in Jan-Feb 2016. Nobody but economists and their media parrots is buying the recovery because it all remains off by a factor of two if not three. 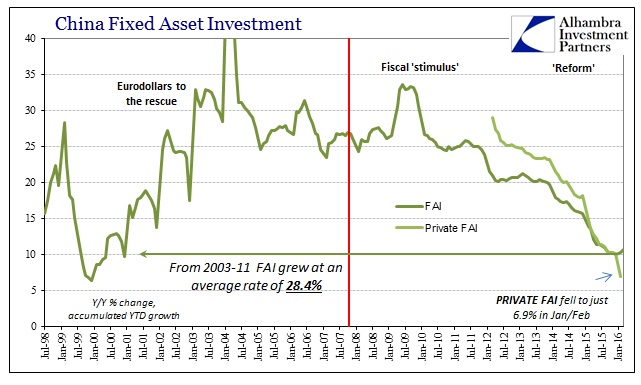 That is why we saw so much “capital outflow” last year as it wasn’t that but rather “dollar” funding being destroyed. Banks may be stupid but they aren’t stupid; they put commitments (funded by “dollars” directly or indirectly as in the forex basis of the PBOC’s balance sheet) into China on the premise of 2011 or 2007 growth being the standard. These 2015/16 growth rates only further confirm that will never happen, so it is a race to not be the Greater Fool at this point.

The slowdown continues in its uneven fashion, and since that doesn’t look like recession it is never declared as anything other than some derivative of “stimulus.” The bottom line is that economic conditions in China are still atrocious and thus conclusive about this paradigm shift, so it really does not matter if one month is a little less brutal than the one before it. 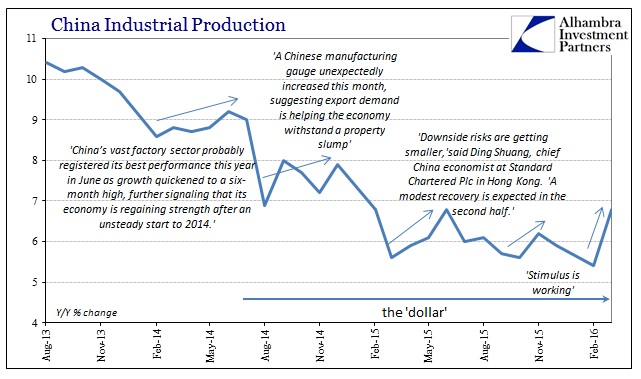 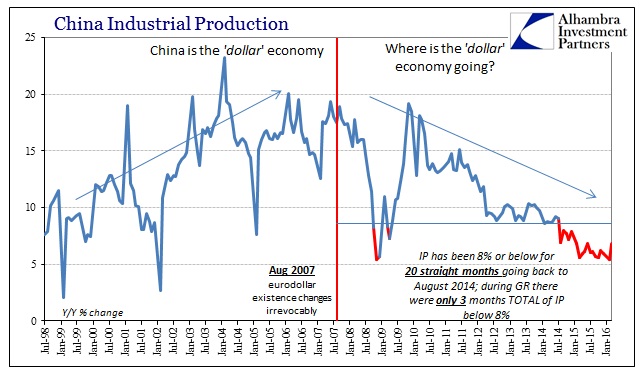 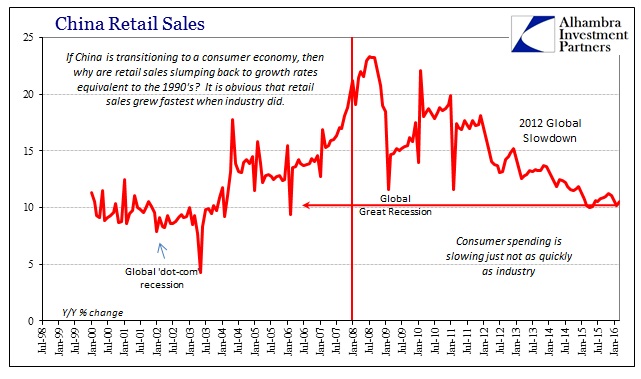 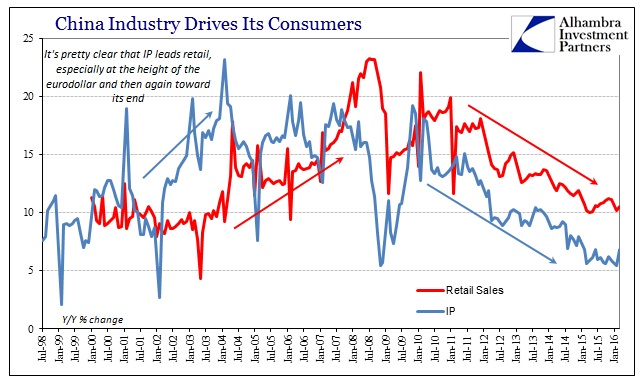