The corporate junk bubble had gotten so beaten up and so dire that removal of the liquidation pressure was bound to attract bargain hunters and momentum chasers. Despite all that has happened, the lust for huge potential gains remains constant. Where that might have been more expressed upon the short side last year, with the end of the last liquidation on February 11 it is found once again in buying interest.

In more fundamental terms, the last year and a half have been essentially a warning that the credit cycle was turning. The degree of the selloff in each individual junk segment was at first general re-evaluation of the fundamental prospect, trying to figure the probability spectrum of maybe the credit cycle continuing after a temporary bump in the road. That was, after all, the whole point of “transitory” not just as an economic excuse but what it also figured for credit, especially the immensity “invested” in oil and energy. The events of August and the rest of 2015 ended “transitory” which meant a shift of the probability spectrum from whether or not the credit cycle was ending more toward really estimating some worst cases.

The latest rally notwithstanding, the verdict against the credit cycle is almost unanimous. In other words, investors and analysts are pretty uniform in their assessment that it has indeed ended. What that actually means is now the focal point of debate.

More than 80 per cent of investors expect the default rate on junk-rated companies will be at least 5 per cent by the end of the year, up from the current 3 per cent, as US economic growth plateaux, according to a survey of asset managers, insurance companies and pension funds by rating agency Fitch.

Almost 90 per cent of investors believe the expansionary phase of the current credit cycle is over.

Default rates have been historically low for quite some time, whether or not the QE’s in the US and elsewhere played a role in the “reach for yield” that kept marginal businesses afloat. For the optimists, a small rise in the default rate might actually seem a positive aspect and more like historical reversion rather than something to get worked up about. That scenario, however, isn’t what junk markets were pricing last year even correcting (as one might be able to) for the drama of illiquidity leading to overshoot. In other words, the triple-hooks, for instance, were pricing junk conditions as bad as the worst parts of 2008. Assuming that was an overreaction doesn’t yield a benign interpretation, it just suggests scenarios maybe not as bad as the worst credit environment in almost a century – which is still pretty bad.

More conservative estimates (by those that were not expecting any turn in the credit cycle) are already seeing something more than reversion, suggesting that it will end up as it usually does in some elevated degree of financial and economic pain.

Moody’s said in its March Default Report that the global default rate on junk bonds should rise to 4.6% in one year, from the current level of 3.8%, and reach 4.3% in the second quarter, surpassing the long-term average of 4.2% for the first time since August 2010.

“Although high yield spreads tightened over the past few weeks, the global default rate is anticipated to keep rising due to deteriorating credit conditions especially in commodity sectors such as oil & gas and metals & mining,” analysts at the ratings agency wrote.

The problem I have with a lot of these projections is that they assume either a continued recovery in the US and global economies or at worst flat and dull growth. It is a dangerous assumption not the least of which is due to the credit cycle change itself – the economy and credit decay become self-reinforcing, especially as those marginal companies that once depended on junk access to remain in business can no longer do so. As those companies get squeezed not by default but by ubiquitous “tightening” the economy can only further struggle more so than it already has.

As there is less economic momentum and overall “demand” due to all that, it only adds to the stress upon further credit conditions which depresses still more marginal company function, reducing the economy yet further, and so on and so on. It is, again, a self-reinforcing slowdown.

We are already find the damage in various economic accounts, but we can also find it in the intersection between the still-slowing economy and credit/corporate liquidity. Commercial bankruptcies have clearly turned, with new total filings shifting right around last August. Worse, as the American Bankruptcy Institute relays, it is not just energy-related firms that are leading the shift:

“After 22 consecutive declines in total quarterly filings, the drop-off is tapering as more struggling businesses and households turn to the financial relief of bankruptcy,” said ABI Executive Director Samuel J. Gerdano. “Distress in the energy and retail sectors is represented in the increasing total of business filings, and we are also seeing a rise in individual chapter 11 filings.”

Energy and retail; oil prices and consumers. That might explain why there was an inflection in commercial Chapter 11 filing sooner than the overall bankruptcy rise, with that version of relief seeing more activity dating back to late 2014. Since Chapter 11 applies more to larger firms that aren’t trying to liquidate, especially corporations that can’t use Chapter 13, it does seem to align with the overall economic slowdown shifting to its latest and more troubling stage (the “global turmoil” that is as much domestic and “dollar” as generically global). The bigger firms struggle on economy and credit where the smaller businesses follow. 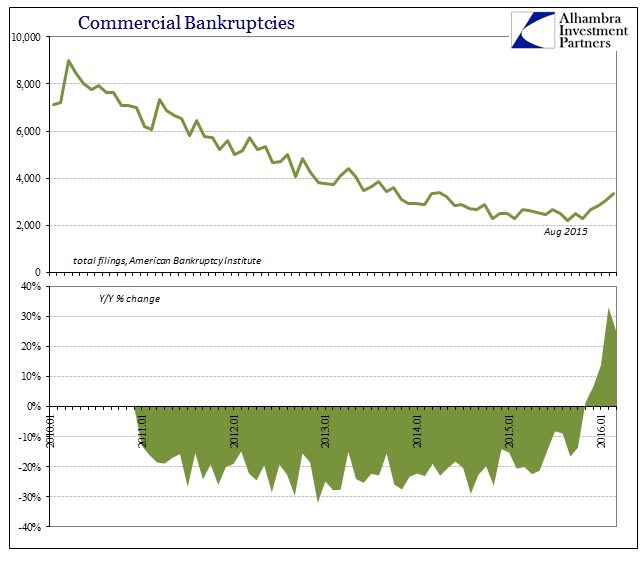 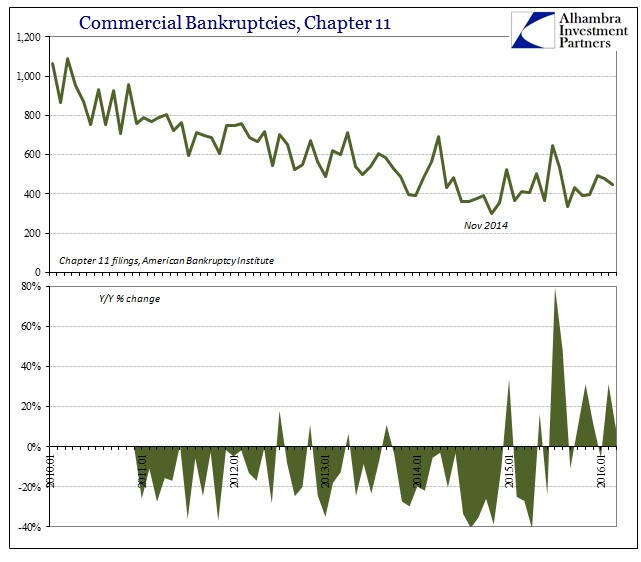 Even with this clear shift in the bankruptcy rate, the total amount of filings are nowhere near what they were in 2010 nor would we reasonably expect them to be given the credit cycle’s unprecedented run in corporate debt. Total bankruptcies rose above 3,000 in February (and 3,300 in March) for the first time since May 2014, and even at that level are only one-third of what was recorded at the peak in March 2010 (an astonishing 9,004 total bankruptcies, of which almost 1,100 Chapter 11’s).

Those relative numbers, however, obscure perhaps the most important point in all of this credit-cycle analysis. Despite the corporate bubble, despite the increasingly lower level of bankruptcies, the US and global economy only got worse through its “boom.” The upswing of the cycle did not aid the economy nearly “enough” to offset its generally downward baseline. If the credit cycle has truly turned, and there is nothing but evidence that it has, then the further weakened economy of 2015 and 2016 will now have to contend with both the lack of credit “boost”, however weak or insufficient that it might have been, but more so now an additional “headwind” as marginal firms go out of business in greater numbers.

Since we are dealing with the “dollar”, really, at the heart of all this, it is important to note that the credit cycle inflection does not just apply to US circumstances. It shows up at various points around the world, especially where it could do the most further damage:

The unprecedented boom in China’s $3 trillion corporate bond market is starting to unravel.

Spooked by a fresh wave of defaults at state-owned enterprises, investors in China’s yuan-denominated company notes have driven up yields for nine of the past 10 days and triggered the biggest selloff in onshore junk debt since 2014. Local issuers have canceled 61.9 billion yuan ($9.6 billion) of bond sales in April alone, and Standard & Poor’s is cutting its assessment of Chinese firms at a pace unseen since 2003.

The eurodollar system was the global economy’s universal solvent, the water-like function of making everything seem clean and flowing. Without it or in only reduced availability, the global economy starts to dry out and crack. We’ve seen that process up close already, and now it seems as if there is only more of the same ahead as the financial disruption of eurodollar decay penetrates ever closer to the real economy and more direct pressure.