There has always been something off about the housing rebound from the depths of the crash. It was, of course, aided in good part by various QE’s that had the effect of skewing marginal benefits of the housing recovery to “investors” and especially institutional investors with the best, cheapest access to credit. From a cycle perspective, the great bubble ended in 2006 with record home ownership that didn’t last, with those marginal homes now in institutional hands largely being rented out to those that no longer own.

Since the top was just about ten years ago, the US population has shifted such that the raw number of potential buyers sitting on the sidelines is now mixed far more with new workers (so we are told) who have no experience at all with the last bubble. For “some” reason, they yet refuse to participate in the ownership experience in defiance of the recovery and mainstream labor market narrative. With high end homes in great demand, the lack of ability of lower tier home owners to trade up has limited the supply (so it goes) of lower end homes with which these new confident workers can start out in their own household formation.

If that is the correct housing posture in terms of the overall economy, new home construction should be truly booming – but it is not. The economics of this mini bubble just don’t add up, just as they didn’t during the big bubble last decade. For one, housing prices have appreciated just as far (in new home sales, median price) in the current bubble as the last one. 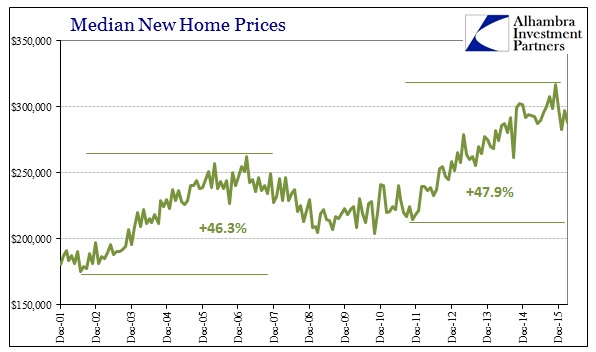 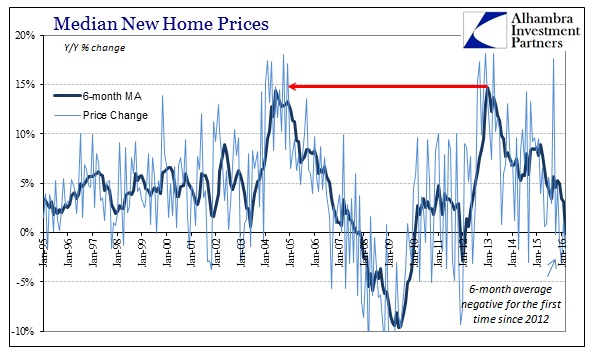 They have done so, however, on a fraction of the volume. That suggests a distinct lack of broad participation and thus once more skewed out into the upper ends and away from the marginal economic buyer. 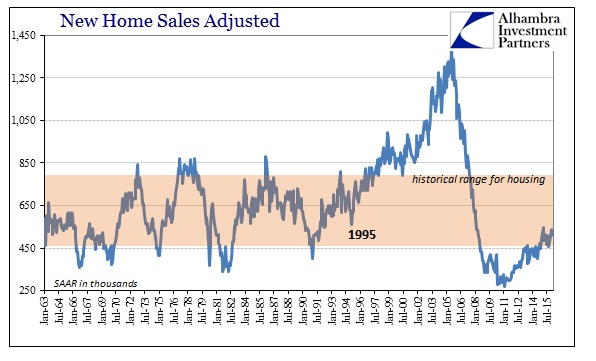 Despite the rebound from the depths of the crash in 2011, new home construction remains conspicuously without broad-based vitality. This lack of depth is even worse than it appears directly above, as adjusting for population you can see (below) that home construction lags even now in 2016 to a tremendous degree. 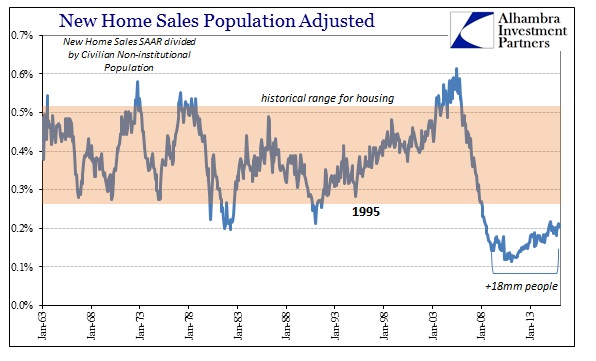 Adjusting for the population, the current build ratio at 500k SAAR in new home sales is as bad as the worst of the entire history prior to the great bubble. In other words, the number of new homes built per population (civilian non-institutional) right now is equal to the low of the severe 1982 recession, and worse than the worst part of the 1991 recession when the S&L industry (the largest financial source of mortgages before the shadow system) was itself at its worst. It is then a mini-bubble only insofar as prices not widespread participation (thankfully).

That leaves the economy in grave doubt, as despite the lack of new building activity the population continues to gain to render any past supply imbalance more so a past consideration (again, it has been nearly 10 years since the top). Since the mini-bubble began in 2011, the potential supply of new households (workers) has grown by 14 million people; 18 million since the start of 2009 when home construction really fell off the historic pace.

Worse, the trend in new home sales (and construction) is at best stagnant. Since hitting 500k SAAR at the end of 2014 (and really since the middle of 2013, though since revised) there has been no appreciable increase in the level of activity just when it should really be picking up into a pattern more consistent with past housing uptrends. There should have been a surge in home construction and sales starting in 2014 (“best jobs market in decades”) to at least double or even triple the pace we see now. 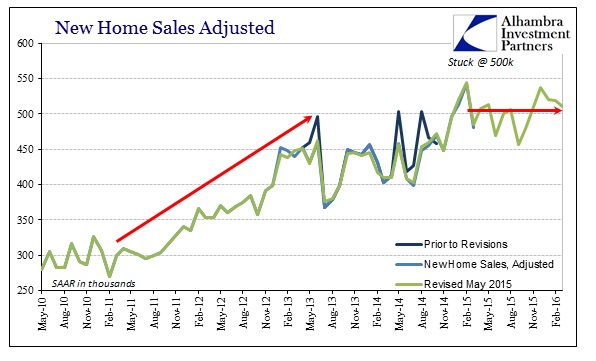 In other words, if the recovery is to be believed there is every factor in favor of that kind of intensity – yet it is conspicuously absent at every level except the upper end (thus the skew in median priced without volume). Peeling back those factors we are left with questions about only the basis for the economy. If mortgage availability is holding back otherwise qualified buyers who might be interested, then it contradicts the notion that the banking system is itself fully healed and ready to serve the fruitful economic rebound. It also raises questions about why banks would be so reluctant in the first place (including “dollar” conditions and anticipated “tightness”).

What is left beyond that is actual demand for owning a home. A truly booming labor market should indeed swell the demand for at least starter homes as the purported economic confidence translates income gains (permanent) into buying activity. Obviously, that just hasn’t happened, leaving only questions about the actual state of either confidence or the jobs market (or both, self-reinforcing). Clearly, there is something missing here and it is a big miss.

It is in many ways indicative of the pseudo recovery that we have come to find in so many of the various sectors of the real economy. The numbers are all positive and even immensely so at times, but it is at best hollow and at worst fleeting. At its core, this was the intent of QE all along with only one deviation. In the quest for “aggregate demand” the monetarists believed that rising prices and activity no matter how misrepresentative (transactions for the sake of transactions) would only ignite a true rebound; that once prospective home buyers saw that the housing crash was actually over they would go back to real estate as if it were 2005 (or maybe even just 2003) again. The housing market, like the actual economy, just doesn’t run on such madness.

For the Fed’s QE-driven economic policy (of the “wealth effect”) it was a double blow considering that transactions for the sake of transactions were supposed to lead to the more fundamental transactions that would drive home building activity back to an economically-significant level; turning “aggregate demand” financial intervention into actual aggregate demand via resurrected construction jobs and the intended further positive multiplier (in theory those construction jobs would lead to more spending and then more jobs elsewhere and then even more spending, and so on). It was never more than a theory.

The more pressing issue is the lack of follow-through in 2015 and now into 2016. It is suspicious enough that sales and construction remain historically muted, but the leveling off of new home sales (as construction) is consistent with the further slowing of the economy that we observe everywhere else except the unemployment rate. That could be banks becoming even more attuned to funding generally (“dollar”) as well as whatever economically shallow pool of prospective buyers re-assessing their “confidence.” It is, again, seemingly a microcosm of the full economy; far, far less than it “should be” and now taking on even more uncertainty.