The BLS released its updated productivity estimates showing that Q1 2016 was negative for the second straight quarter and the fourth of the past six. Such negative and flat productivity in any real sense doesn’t make sense. This disparity seems to be, as always, in the BLS serially overstating the employment gains. The level of increase in total hours worked is not commensurate with weak output (a subset of GDP). Thus, we are left trying to figure out why the “best jobs market in decades” coincides with everything from obviously weaker GDP (especially in those last six quarters) to the continued and lengthening contraction in other indications of US consumer “demand.” 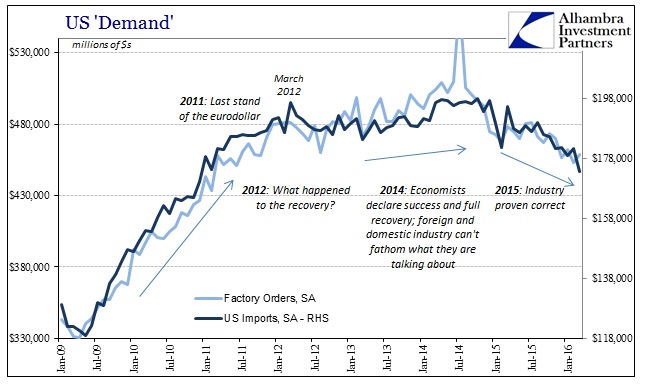 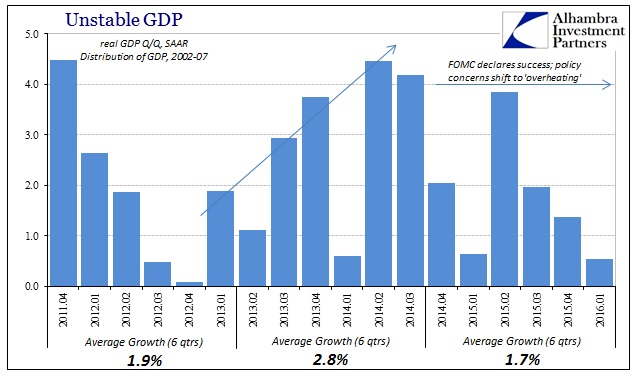 As a reminder, the BLS does not actually measure productivity directly but instead calculates it as a leftover or plugline between the BEA’s GDP-derived estimates of output and its own employment computations (hours worked). This arrangement makes sense in that you would expect to find both increases in hours and productivity combining to push up output. That, however, is not what we find especially during the entirety of the slowdown since 2012. 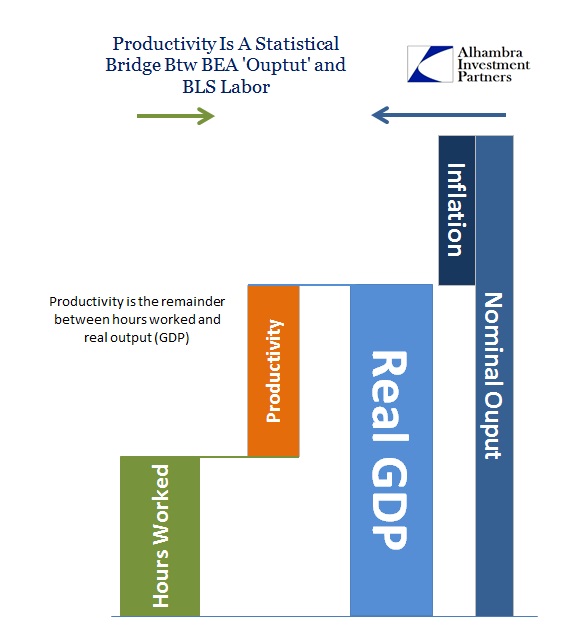 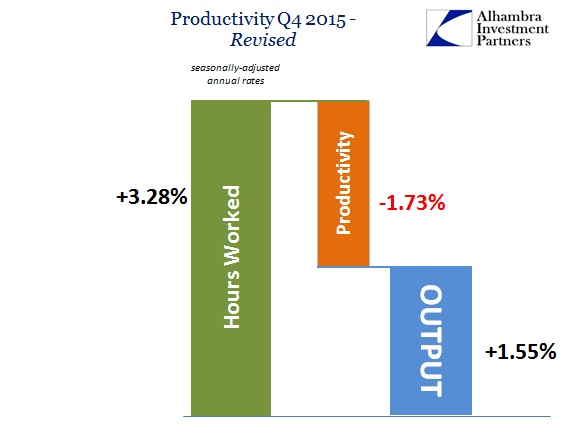 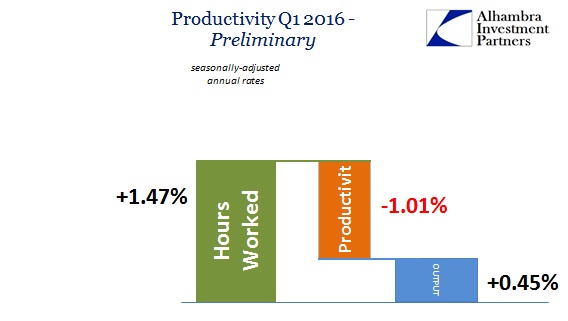 You wouldn’t know it from either the Establishment Survey or the unemployment rate, but the BLS actually shows a significant reduction in the growth rate of hours worked in Q1 as compared to Q4. That prior quarter shows a monstrous 3.3% gain in hours which set against relatively weak output can only add up to highly negative statistical productivity. In Q1, despite that reduction in gained hours (by more than half) productivity is forced yet again significantly negative to correspond with the nearly zero rise in output.

Since this disparity has been ongoing for years, it has left economists to ponder why a seemingly strong economy would bring forth zero productivity gains when instead they might do much better to question the “best jobs market in decades” that doesn’t align with any other economic data or accounts – including, obviously, these very measures of output. 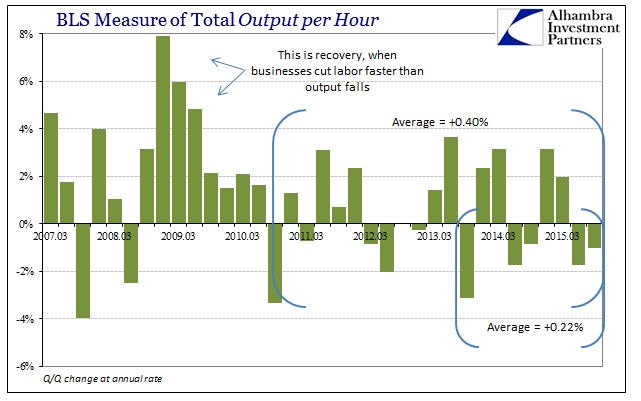 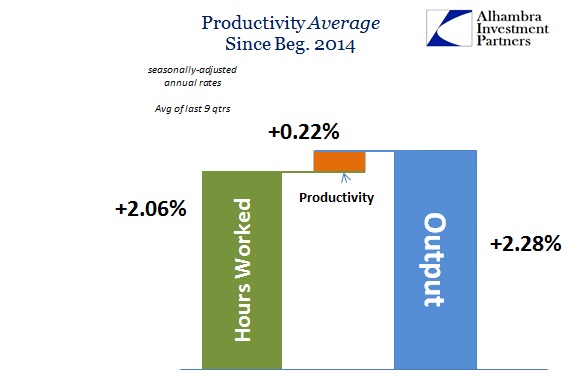 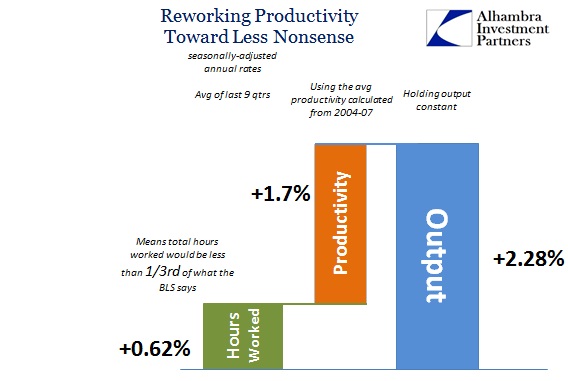 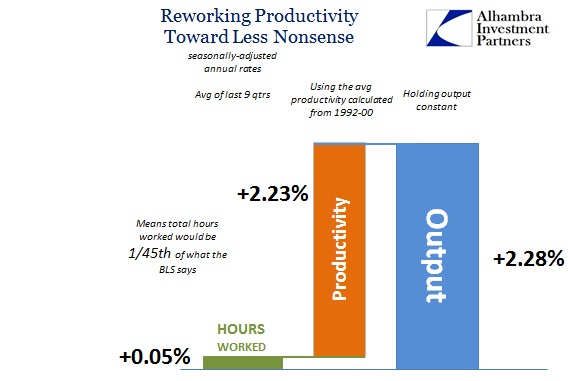 Over the past nine quarters dating back to the start of 2014 and the amplification in BLS calculations for employment, productivity is forced to essentially zero because the increase in hours worked “explains” almost the entire increase in private output. Reviewing back to the start of 2011 doesn’t much alter this curious scarcity, as average productivity since that starting point is only marginally higher.

If we instead assume the BLS is wrong and overzealous due to trend-cycle bias (a suspicion that only grows with each payroll report) and instead superimpose productivity levels from past growth periods that actually made sense within their own economic context the entire labor market view changes drastically. 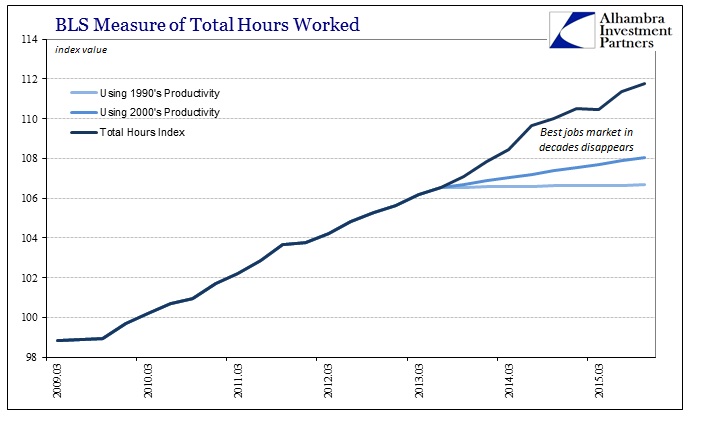 Instead of the labor market continuing upward with little notice of broadly weaker economic circumstances of late, the revalued productivity pushes hours worked into a pattern that looks more familiar: 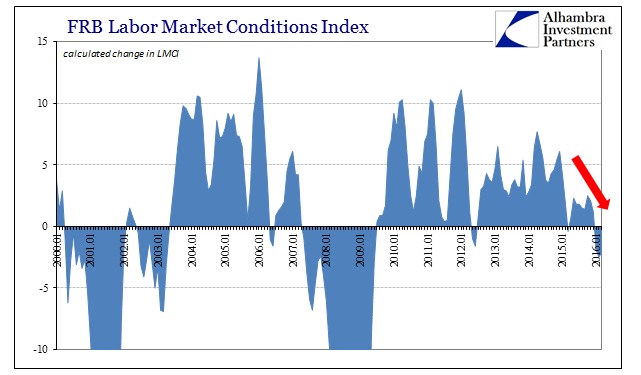 I don’t want to overstate the similarity, however, as it makes a big difference where you start splicing productivity renormalization. If we instead push back recalculation to the start of 2011, thus suggesting more normal productivity the entire time it has been calculated at zero, the labor market picture drastically changes yet again. 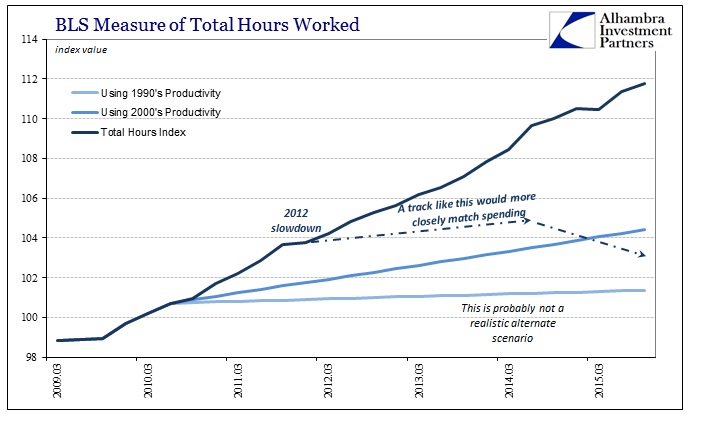 This alternate suggestion, however, does seem much more closely aligned with so many other economic series especially spending (shown above at the outset as “demand”) and income. Our goal here is not to precisely figure the exact trajectory of hours worked or by just how much the labor statistics might be overdone, rather this exercise is intended to suggest what the actual labor market might be like in more broad and general terms – and really to gauge how difficult it is to make these labor numbers find a more conforming setting.

If I were to guess, I would expect that productivity like the 1990’s is and has been wholly unrealistic, so that alternate path is likely too severe of an adjustment. The 2000’s average productivity is probably closer to what might really be taking place, though we might leave some margin to account for still further weakening (as I have drawn on the chart above).

Whatever is actually the case, I find it very likely that we are on the right track in this deconstruction. Widening the context in view of a longer history of hours worked resembles very, very closely other labor market divergences. 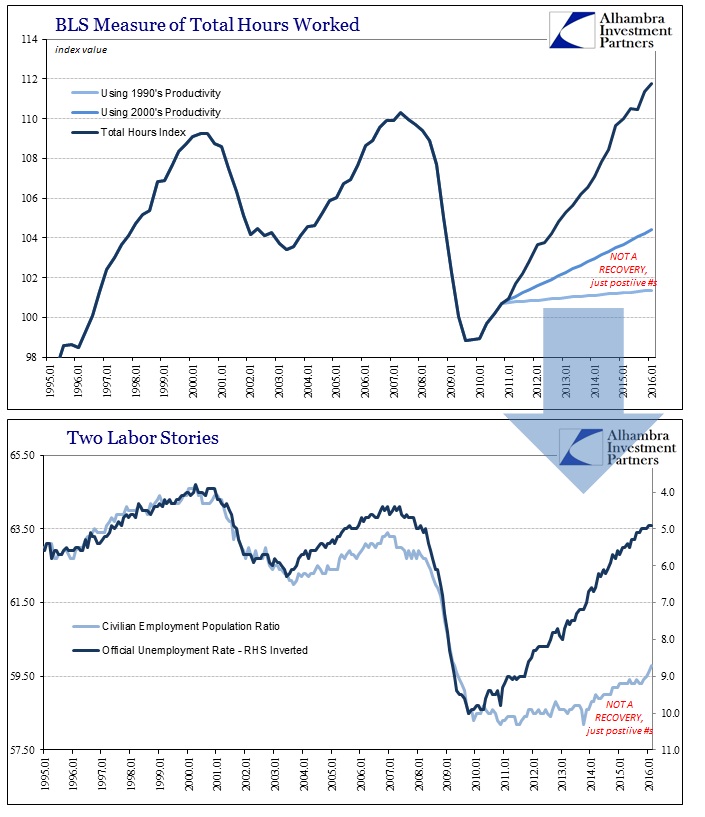 The BLS’s current run of its aggregate hours index follows almost exactly the unemployment rate, while an hours index produced in more historical comfort as far as output and productivity matches almost exactly the participation problem. If we assume that it wasn’t productivity that changed but instead the dramatic drop in labor output suggested by the severely curtailed labor participation, we end up with employment figures that correspond very closely to everything else. The reduced participation of overall labor (in contrast to the unemployment rate which suggests “full employment” or close to it) yields a much smaller economy and all it takes to agree with that on the BLS’s own terms is to use less mysterious productivity estimates.

The current convention surrounding payrolls and employment asks us to believe that everything else is wrong, that American businesses under intense and continuous revenue pressure (and now profits) continue hiring at an almost epic pace in clear defiance of one of the most basic and fundamental economic properties, and where no further evidence of this surge can be found in wages, incomes, and especially spending. Or we can move a very short distance to where productivity didn’t suddenly drop to nothing for years at a time, leaving different measures of labor output in total agreement among themselves and with the rest of the obvious economic deficiency. This view of productivity would suggest that businesses haven’t radically altered their behavior, or the economy’s, and have instead just reacted to the conditions as we find everywhere else. In short, productivity might still be lower than found in prior decades but still positive, leaving labor utilization and aggregate output much less than calculated now and explaining quite well and more comprehensively the current economic predicament.

There is just too much sense in this latter view, especially where hours worked would so closely match in general the outline of the reduced labor participation. Since it required very little alteration on my part and using factors well within the bounds of historical experience, I find it still more compelling evidence of both the economy we actually see and why the one we are “supposed” to was never a realistic possibility.