It was an impressive rebound from the doldrums of February 11. Stocks managed to get back nearly even, as the S&P 500 closed above 2,100 on successive days April 19 and 20. Since then it has been more of a struggle; sideways to slightly lower. Gold has remained near and above $1,250 while funding markets and UST’s have been bid once again. The 10-year US treasury had its yield move as high as 1.94% by April 26, now the yield falls as stocks toil having settled again to less than 1.74% today.

There has been unusual upset emanating from Japan, but the systemic turn here seems to indicate something beyond that. It is in many ways more familiar.

We still have no idea what the PBOC has done or might still be doing. Last noted here back in March, the Chinese central bank had begun reporting an IMF call sheet template but with very little in Section 4 where all the pertinent numbers should be found. Instead, they are still blank. As I wrote then:

No swaps, options, swaptions or forwards, just $33.7 billion in almost perfectly balanced repo. It is possible that this is correct as the PBOC will often use its influence to get banks to undertake any direct interventions on its behalf, leaving individual bank balance sheets containing the appropriate balances. However, in this case given these conditions, that was not likely as even if Chinese banks were directed (meaning no alternative but to follow policy intentions even if reluctantly) to wholesale means of enforcing a CNY peg that still would have left a future leg (forward) leading back to the PBOC.

This lack of disclosure, as well as misunderstanding the wholesale nature of the “dollar” problem, led to huge mistakes in interpreting what was to come and then afterward what had just happened. The world on August 10 was shocked to find China had “devalued” its currency when that just wasn’t the case. Some were openly applauding the move as if it were intentional “stimulus” rather than harbinger of great and widespread financial difficulty.

We know the PBOC has been keeping up with its template because the numbers change each month, though not by much and certainly not in any way that would suggest actual significance. So we are left to wonder and wander through reasoned (we hope) imagination. The shortest intuitive leap is the natural three-month maturity cycle of most shorter-dated derivative contracts including forwards.

The current spot on the calendar marks today three months forward from the bottom of the last liquidation. There is significance in that, as well as the shift in CNY that started earlier in January (subscription required).

I don’t want to be overly simplistic, but tomorrow makes three months since the end of the last liquidation wave that coincidentally transitioned during China’s Lunar New Year Golden Week. The PBOC acted on Friday, February 12 and then the big move on February 15 in CNY (appreciation). If we reasonably assume that the PBOC elevated its wholesale “dollar” activities at least on January 7 and 8 when the CNY “devaluation” was suddenly arrested, then we have to further assume that whatever it took to accomplish that was greatly amplified in the middle of February.

To this point, that is exactly what we find; since April 11 CNY has been moving slowly but steadily lower again. It traded higher to about 6.50 today but that was after 6.5208 yesterday, which was the lowest in almost two months. It might be coincidence that stocks only gained for another week beyond that CNY inflection, and that bonds and safety are back in greater general favor as well. 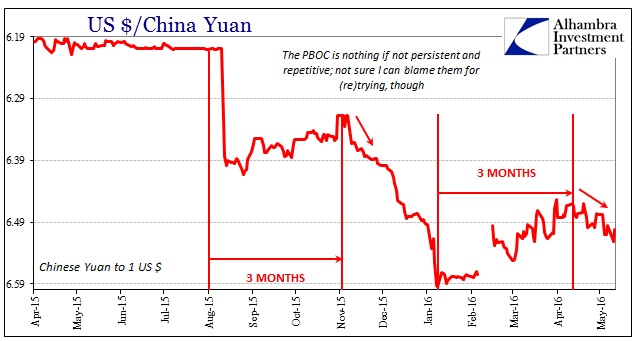 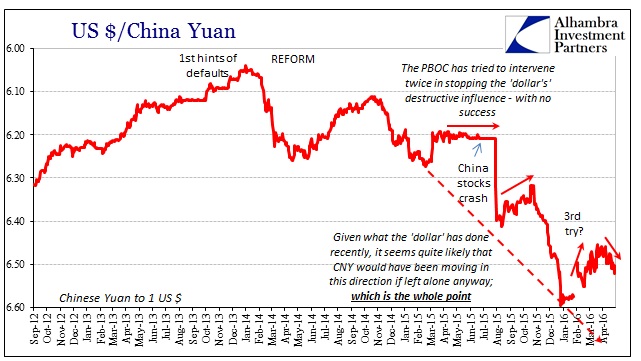 Since history merely rhymes rather than repeats exactly, there are as usual wrinkles to consider and consider whether or not they represent serious differences (or are just differences in time). The most obvious is the oil market and oil prices; as CNY shifted at the first three-month mark (dating back to the PBOC’s first intrusions in early January) WTI and oil prices did not. There is, however, some precedence for this divergence as oil prices did the same coincidentally last year during the same March-May run-up. 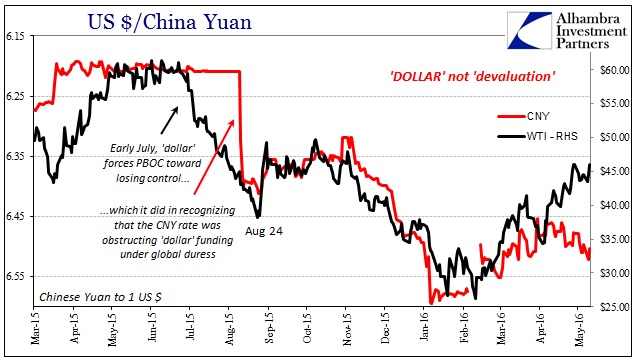 It’s possible that the clear shift in sentiment is making a difference where illiquidity may just be getting started. Copper prices have fallen and thus are more aligned with CNY than WTI on that count. Further, there is evidence that the PBOC is still active on these terms though quite limited by other considerations (which I run through in the article behind the paywall). In other words, it may yet be a shift in systemic liquidity but not so far nearly as naked like that which occurred in November. 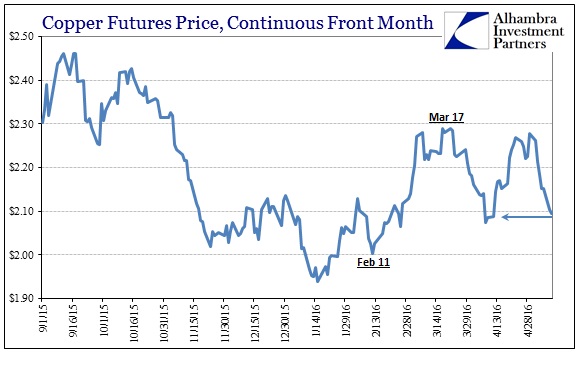 It all suggests that pressure is rising just not in unrestrained fashion. That was one of the implications of the IMF’s sudden interest in PBOC “forwards” as it indicated that though late officials are learning the true nature of this “dollar” beast. I doubt it will make much difference in the end beyond making each of these cycles or waves slightly different from each other. As we are witnessing, I believe, in Japan, the “dollar” will not be denied no matter how up-to-date central bankers might get. Imbalance is imbalance, and wholesale derivatives only provide at best maturity transformation of it. The outlines of that are seemingly again coming into view.