What if the FOMC and the wider Federal Reserve apparatus had heeded Greenspan’s uncertainty? There is grave danger in wandering too far into counterfactuals, but there is some value, I think, in the exercise in this context. What we are really talking about is time, and it is time that is most relevant today as the greatest economic cost. This current economy, the one which follows from the FOMC contemptuously ignoring Greenspan, including the Chairman himself, has already surrendered trillions because of it.

The Fed Chairman in June 2003 wondered quite pointedly whether monetary policy was as sharp as everyone at that table believed. They had great reason to doubt, though any doubts were often quite fleeting in that setting which encouraged only ideological rigidity. The economy was finding little recovery despite mild recession in 2001, and then the stock market that just wouldn’t stop crashing, all making a mockery of both the supposed “Greenspan put” as well as the power of monetary “stimulus.” The FOMC had voted eleven times for more monetary “accommodation” starting in January 2001; they brought the federal funds target down from 6.5% all the way to 1.75% in less than a year. And still they were stuck in 2003. If that didn’t unleash honest self-reflection then clearly nothing ever would (which is now proven fact).

Furthermore, the Bank of Japan had undertaken the world’s first ZIRP in the spring of 1999 and then QE in 2001 when they found ZIRP just wasn’t enough. The “Q” in quantitative easing proposes the kind of precision and authority that was commonplace at central bank sessions and discussions, a belief in their own abilities as something like actual scientists. That the Bank of Japan “had” to undertake a second QE just over a year after its first completely destroys the notion of “Q.” This point was not lost on the FOMC members in June 2003; they just had to work a little harder to suggest to themselves it was a defect of Japanese.

What Greenspan was actually saying at that momentous meeting was to, as I wrote last week, “make sure you can do what you say you can do before you have to do it.” The Fed never did as conditions suddenly changed seemingly for the better in 2003 to which the orthodox ascribed their own charmed hands. From that point forward through the rest of the housing bubble, the mania, the Fed believed it held a magic wand to cure all economic and financial ills – the quarter-point adjustments in the federal funds rate expertly executed and communicated by the most confident and assured professionals. They even believed this would hold as the housing bubble turned to bust, so misplaced and entrenched was this absurd idea.

What might have been accomplished instead had the FOMC taken the other path in June 2003? It would have followed into actual monetary research and the stark evolution of banking rather than the determined ignorance that we actually saw (shutting down M3 in 2006). But even if that had taken place, I find it unlikely that it would have made much difference on August 9, 2007, and for the next 18 months or so. That isn’t to suggest that a more learned FOMC might not have performed better and maybe even softened the blow, only that by the mid-2000’s I think it was already too late. The Committee would have understood far better what was going on, rather than erratically groping from one ad hoc failure to the next, but that isn’t the same thing as actually being able to do anything useful about the imploding system.

I have written many times before that perhaps the best chance for the Fed would have been to set aside everything they had done during that time and instead focus on the credit default swap market – especially in the months around Bear Stearns, before and after. CDS were the central axis of the crisis not only as a dramatic (fatal) removal of offered balance sheet capacity for risk (hedging) and thus real liquidity, but more so in direct line of prices. The widespread adoption of the Gaussian copula (in the early 2000’s) to purely impute correlation among especially mortgage structures meant CDS were right at the center of liquidity and losses. Because the formula determined correlation via CDS spreads, the more financial firms tried to hedge in the initial subprime re-evaluation, the more the copula inferred greater correlation which, especially at the ends of any structure (correlation “smile” in the equity and super senior tranches), only reduced prices further requiring more hedging and so on and so on.

Eventually, CDS capacity sunk so low that there was no longer any ability to hedge at all (sending desperate financial agents to short bank stocks as a rough replacement) and prices free-fell, sparking marked losses in OTTI write-downs, causing banks to report billions in losses and turning subprime mortgages into widespread systemic doubt. Breaking the CDS chain and providing some Federal Reserve capacity in risk absorption offering (taking over, for example, not just the existing CDS portfolios of the monolines and other firms like AIG, but allowing them to continue to write protection and offer hedging to frantic markets to take some CDS-illiquidity out of the pricing mechanics of the Gaussian copula) might have had some chance to stop the snowball careening toward avalanche – might. Even then I remain doubtful.

Any potential gain, then, from heeding Greenspan’s warning would likely have been limited to what happened after it was all over. The panic and crash in 2008-09 was nasty and unpleasant, but what occurred immediately thereafter was in light of June 2003’s discussion perhaps criminal. The real benefit to having the central bank awakened to the eurodollar system would have been in not trying to redo it all over again and losing so much time and further distortion undertaking QE’s as if it were all some temporary deviation from the 2005 trendline.

True monetary reform of the global credit-based reserve currency was the only path with a realistic chance of success. If the FOMC had understood what the eurodollar was “saying” from 2007 onward, that would have been the best chance for true reform and then actual, sustained recovery to this point in time and beyond. It would likely have been slow and awkward, perhaps still punctuated by more pain (which wouldn’t have been any different), but I have to believe that the overall direction would have been persistently upward and by now very likely fulfilled. Instead, we have had no advance at all beside the short and false burst to 2011, but worse than that the arrow still points down in 2016 almost ten years after it all started. We have already lost a decade and are now in danger of losing even more.

If the economists of the Federal Reserve had actually followed their duty (to the economy rather than their ideology), they would likely have been able to overcome any political impediments at the crisis juncture. That was the time when actual reform was at its highest probability – there is far less resistance to systemic overhaul at the moment systemic capacity and function is at its lowest or worst. Instead, they bred TBTF as if that hadn’t been a complete and utter disaster already. The benefit of the Fed figuring out the eurodollar in 2003 would have been moving up the restarted system to likely 2008 and 2009. It is a counterfactual that I can scarcely contemplate, so sickening it is to review what did happen.

What would reform of the eurodollar look like then (or now)? The answer to all these great problems is monetary stability, a system that does not depend upon geometric growth to generate just the appearance of prosperity. It would be the modern incarnation of the strong dollar – a dollar that does not rise nor fall, but remains as a fixed point for honest global trade. The global economy spends far too much time and effort on monetary and financial factors, a drag that has only increased (uncertainty) as “stimulus” fails and the effects of further monetary decay become more and more evident.

Unstable money and banking is an enormous perhaps incalculable cost to the economy, but one that is being somewhat revealed by what the economy isn’t. It really is that simple, but orthodox economists have preached for decades now that banking comes first – so much that banks literally rewrote the entire global system of money under their very noses. All the while Alan Greenspan was congratulating his maestro performance of jiggering the irrelevant federal funds rate a quarter point here and a quarter point there, innovations like the Gaussian copula turned other banking factors into prioritized “weapons of mass destruction” as they were once called. I use the term “eurodollar standard” to describe what replaced Bretton Woods gold exchange starting in the late 1950’s, but in reality the eurodollar is at its heart a system of swaps. It is not a dollar standard but a swap standard. The exchange of cash flows, and really how they are exchanged and further manipulated long after genesis, had long ago become more important than what counts for cash.

The reason the eurodollar system failed was really quite simple; like the Gaussian copula it was never truly stable. It only appeared that way so long as its internal contradictions (the copula never “solved” correlation, it was only a short cut and a bad one) remained small and out of the way. The eurodollar could thus perform as something like a monetary system only when it was growing in geometric fashion; remove that growth and its inconsistencies and even paradoxes become central. 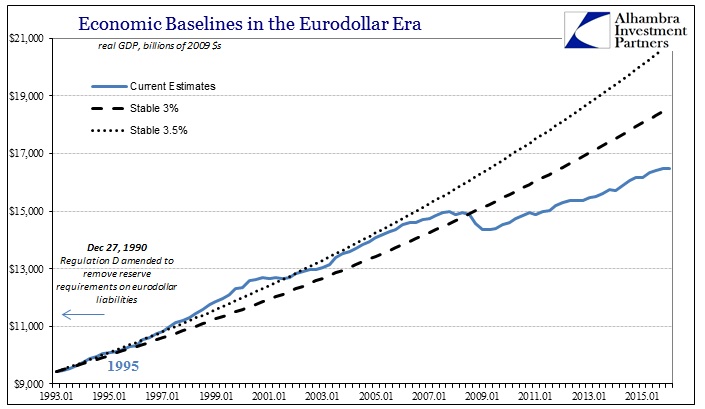 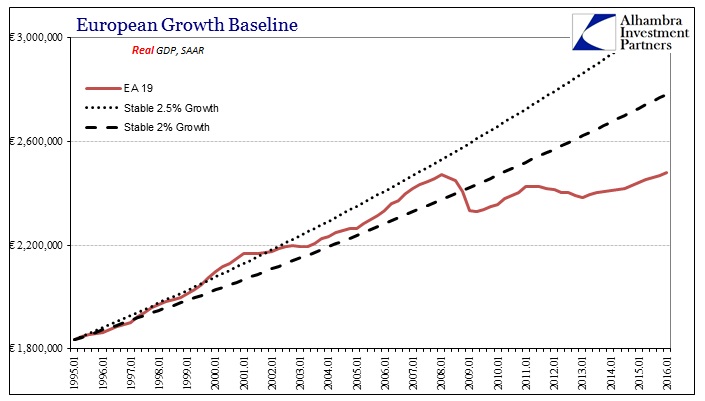 These are all lessons that will take years for the mainstream to appreciate, a Herculean task to “unlearn” decades of monetary myth and PR (Great “Moderation”) – and then even more years to figure out how to actually fix it. Those that advocate a strict gold standard are right about what that means for stability and a functioning monetary system, but there really is no direct route from cross currency basis swaps across several currencies embedded within traded liabilities funded by rehypothecated repo programs to just gold; backwards compatibility was quite intentionally left out. The wholesale system cannot just be set aside by whim to make way for true stability. It will take a concerted effort to find an actually workable, real world solution.

It really would have been a far different world had someone able to do something started thinking about that solution in 2003. Again, I don’t think it would have been early enough to avoid panic and “great” global economic disruption, but it was the best chance to get into real recovery.  Instead, in 2016 we have trillions upon trillions in lost opportunity to the point of burgeoning social disorder in more places around the world and we are still on Square One; maybe even less than Square One as central bankers continue on as if there have never been any doubts at all. The panic and Great Recession was an achingly frustrating lost opportunity, but the real tragedy is that final notice was served in 2003 to economists.