The Moon Is Not Random Error

The Moon Is Not Random Error

On March 29, 1900, Louis Bachelier successfully defended his doctoral thesis at the University of Paris. It was breathtakingly innovative and complex, so much so that it would take decades for his ideas to be fully understood let alone adopted. This was the case even though his thesis advisor was none other than famed physicist Henri Poincairé and that he solved the mathematics of Brownian motion five years before Einstein. Well, he didn’t quite “solve” the problem, he was the first to model the process stochastically.

It was his research subject rather than the object for deducing it that was of great interest. Bachelier was intent upon using mathematics and really statistics to decipher financial speculation. He established what has become the dominant theory as finance is further and further quantified. He wrote, “there is no useful information contained in historical price movements of securities.” It was the birth of Wall Street’s “random walk.”

Bachelier’s theory has been behind almost all financial evolution especially during the eurodollar era where math has taken on not just central functions but even the proportions of money itself. The housing bubble was the housing bubble because Wall Street had since the late 1980’s been busy hiring every Ivy League mathematician they could find (including David X. Li and his Gaussian copula) to develop and manage complex “products” that their sales distribution networks could sell. The Finance majors were all in the front and on the phones finding new customers to buy essentially increasingly complex formulas that did nothing more than try to solve why Bachelier’s randomness always seemed to fall (catastrophically) short.

Randomness is really a cop out; it’s a short cut to use math where math doesn’t belong, or at least not to so much blind deference. We live in an incredibly complex world and operate incalculably complex systems which current technology and theory cannot actually model. There is far too much texture and granularity in individual systems than can fit in all the world’s computing power. Randomness is like an MP3 compression – that what is left out of the model isn’t really important because of subjective opinions about what is most important (independent variables).

In other words, statistics starts with an assumption of randomness and then can never quite overcome never being able to prove it. A stochastic model especially in the financial or economic context declares that it knows all that is worth knowing, and thus can leave out the rest for the sake of mathematical computation. As you can imagine, since imagination is the great defeat for stochastic subjectivity, this has been a primary weakness.

One of the most striking examples of the hubris delivered by belief in randomness was a brush with nuclear war in October 1960. Some prominent defense contractors, including, ironically, IBM head Thomas Watson, were visiting NORAD when a Greenland station declared the unthinkable:

At some point during their visit, the group was informed that equipment located at Thule Air Force Base in Greenland had flashed a Soviet launch warning, claiming 99.9% certainty that a nuclear salvo had been launched and picked up by the station’s radar.

The base immediately declared DefCon 1, a condition that would not be widely known until 1983’s Hollywood simulation of military stochastic simulations, WarGames. They called to Strategic Air Command and bombers were given high alert status, but no one could verify the attack was, in fact, real. Greenland’s Ballistic Missile Early Warning System was the only equipment declaring, essentially, nuclear war. As this was about two years before the Cuban Missile Crisis, and really within the infancy of electronic warfare (itself based on computers which were themselves nothing but probability constructions), confusion, alarm and near-chaos reigned if only for a few brief minutes – I can only imagine what Percy, Petersen and Watson were feeling having rather more intimate knowledge of the military than most.

Fortunately for humanity there was no nuclear exchange at that instant, and no indication that it went so far as to be anything more than a few heart-pounding moments contained to a small cadre of network nodes at NORAD and SAC. It was established that Thule’s equipment, 99.9% certain of Soviet missiles already over the horizon, had picked up the rising moon.

Whoever had encoded Thule’s radar interpretation software had simply forgotten to include the moon as an important variable, leaving it outside the realm of “knowing all that was worth knowing.” This was just simple carelessness, as there was nothing at all random about the moon.

This is why “tail risks” are far more common than they “should” be. All those powerful and elegant black box MBS models built and running during the 2000’s couldn’t see 2008 coming; they had no idea even when it was all right there in front of them because they had assumed that what was in front of them was not important. In the case of the FOMC and monetary policy, that group even went so far as to defer to the models over their own observations. Simulations kept projecting that even with drastic financial problems the economy wouldn’t be that bad off – all because these models simply assumed that FOMC “accommodation” would be powerful. The chance that it would be irrelevant and disastrously ineffective was intentionally left out of “knowing all that is worth knowing.”

The eurodollar and wholesale finance, then, has been left as random error. Like the moon rising over Greenland, there was and is nothing random about it – orthodox economics chooses not to see or appreciate it because it is antithetical to all of this. Because they declare it as random doesn’t mean we have to be, like them, surprised each and every time it is found quite otherwise. After a while you would think they would notice the regularity of all this supposed “randomness”, but politics prevents it. Quantity theory of money ends with eurodollar acknowledgement; the current philosophy of central bank activism is predicated on quantity theory.

In more recent months, regularity has once more been spotted “randomly” defeating the best laid stochastic ideas of orthodox theory. The FOMC declares that the economy is terrific to the point of almost “overheating” and that markets are “resilient” and robust. Yet, there was a global episode in August that was eerily repeated almost exactly in January/February. Just how close of a repeat? 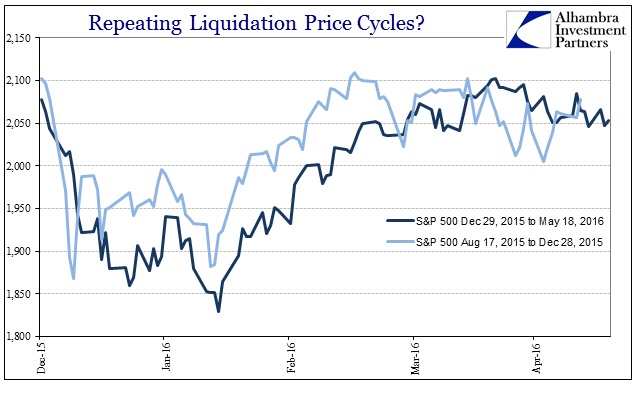 So close that it obliterates any idea of Bachelier’s random walk theory. Not only that, the causation of such repetition can be found in still more repetition: 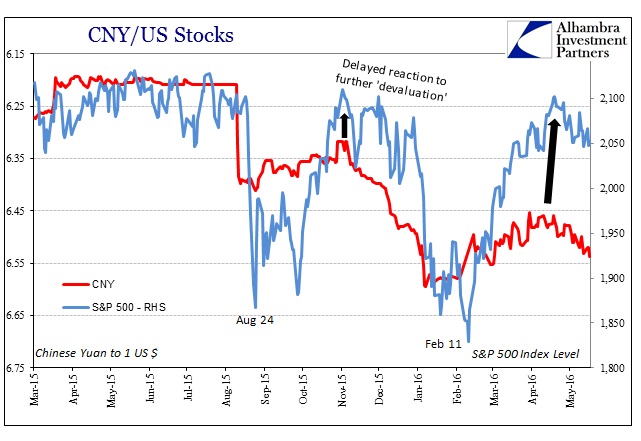 This undeniable pattern is so powerful that it even pushed the mainstream to acknowledge that what was supposed to be arbitrary really never was. As I wrote earlier (subscription required):

In the case of global asset prices, it has been that way in each of the past two liquidation events. It was so evident that even the mainstream media stopped looking at CNY “devaluation” as if it were actual devaluation. There was no missing the effect even if they had (and have) no idea the cause.

In the terms of this discussion, CNY stopped being a random error and started to awaken the wider public to the reality that “knowing all that is worth knowing” is never, ever true. S&P follows CNY and CNY follows: 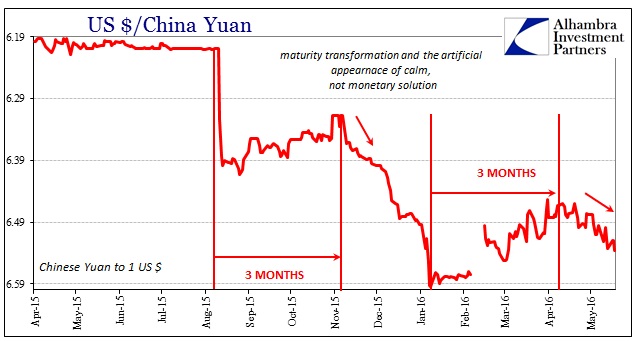 PBOC. And PBOC follows “dollar.” To Janet Yellen and her constantly befuddled comrades, this is all just random noise that she and they cannot make any sense of. After all, their stochastic models all proclaim that this is all impossible (just like they did in 2008). Their regressions, which rely distinctly on stochastic randomness, continue to claim a world that even though nobody can find it is more real to them than any of this. They are devoted to “what should be” to the point that they can’t even begin to understand “what is.”

It’s the moon, Ms. Yellen. You and your orthodox economists have been so busy congratulating yourselves for knowing all that is worth knowing that there is now far more outside the models in what you call randomness than inside what you call worth knowing. As I write constantly, it takes enormous and determined effort to not detect the moon (eurodollar).