The Remarkable Accuracy of The Ticking Clock

The Remarkable Accuracy of The Ticking Clock

The People’s Bank of China today fixed the CNY exchange (reference) rate below 6.56 for the first time since early February. That means all the tremendous effort that went into erasing December and January’s “dollar” pressure (not devaluation) has been unwound, as the currency now trades just about where it was at the start of China’s Lunar New Year Golden Week. This downward trend has not been unexpected, of course, but even I figured there would be a little more variability and not so much of an exact countdown on the ticking clock.

The issue is forward intervention, either directly or as derivative cover for Chinese banks to do the same. In the parlance of wholesale finance, someone got “more short” the “dollar” in order to shift the funding disruption into the future. The only choices are those Chinese banks or the central bank, but in reality either path ends up in the PBOC’s lap. It is a difficult concept to grasp from the orthodox perspective because it is and has been assumed since the Asian flu episode of the late 1990’s that immense stockpiles of foreign “reserves” were proportional insurance against just this sort of problem. China had gathered by far the greatest hoard, therefore it has the most currency/dollar insurance?

China did what it was supposed to do in accumulating, purportedly, the largest stockpile of forex “reserves” in human history. In fact, the Chinese made that forex the very basis for their internal financial mechanisms with regard to money and market liquidity. And yet, for “some” reason, China was subjected to great strain and even open disorder anyway; forex reserves don’t seem to have quite the effect or give quite the ability economists have expected for nearly the past two decades. Instead, to try and quell outright hysteria in August, and surely starting before it, the PBOC certainly resorted to swaps, forwards and likely an entire array of wholesale re-orientations. For a time, they, like Thailand in early 1997, appeared to work; it was certainly enough to fool economists.

Indeed it was, as by September it did appear in the traditional accounting as if China had cut back on having to “sell UST’s”; by October, the FX supply was actually rising again. Rather than indicate that the worst was behind, almost three months after the massive and disruptive “devaluation” it all started again like regular clockwork. The rhythm of interbank derivatives is regular because everything is standardized. Even in Thailand in 1997 there was but one three-month “dollar” window before all hell broke loose for the final time.

For Thailand, the clock ran out just about three months after it deployed its wholesale mechanics. On May 14, 1997, Thailand was hit with another wave of “speculation” only this time it occurred while prior dollar forwards were maturing; the pressure upon the baht was then amplified by those prior intervening acts, or short-term gain that quickly disappeared into the intermediate-term nightmare. By July 2 that year, the baht broke its peg and devalued an enormous 16% that day alone. By early January 1998, the baht had been brought down by more than 50% and the Asian flu spread far across the Pacific.

The Chinese, by contrast, have managed to do what the Bank of Thailand never could, having staved off a direct line of depreciation now for a third time. While we don’t know exactly how they managed it, we can quite reasonably assume that the scale and complexity of the interventions rise with each one. It has led to an enormous knowledge gap, but at least in this case the media is finally showing some open-mindedness if only by force of the most obvious correlation (CNY) throughout the past year or more.

Back in March, the IMF got involved publicly in questioning PBOC derivatives methods, which belatedly brought this concept of interbank regularity at least a cursory introduction. It was no surprise that even then it was described still from the orthodox perspective; the Wall Street Journal related the IMF’s query to the PBOC “propping up the currency.” As I wrote in response:

First, that’s not the goal at all, as the value of the currency exchange is not the problem but the symptom; the PBOC is not attempting to “buy yuan.” The intent is to supply “dollars” (selling “dollars”) to a market starved of them. Second, this is obviously not something the Chinese central bank just decided to do in 2016; it has been doing it all along, only it has taken economists and the media this long to figure it out. It should have been apparent…through the middle of last year right into August 10. 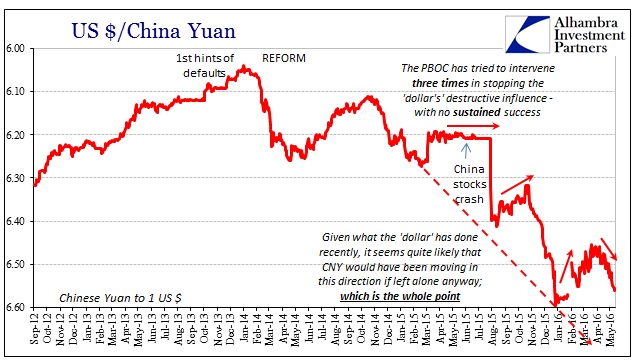 What that meant was the same old situation setting up for a third time. The PBOC interventions could only buy time, meaning some variation of a three-month window. Because, as the IMF finally pointed out, we are in the dark about all of this we can’t really know much apart from the basics of the interbank construction. The “clock” calibrates to 3 months, but from what point does it actually start counting down? It was always most reasonable to assume it would begin where something changed. In CNY, that was surely early January as the exchange rate flashed down to 6.60 and then abruptly stopped. From March 23 (subscription required):

Part of the problem even in belief of the “ticking clock” is that we have no way of knowing when it started ticking or really how much time is on it. We don’t know when the PBOC switched to truly hitting the forwards and can be reasonably assured that it wasn’t done all at once. So that leaves us guessing about not just when they started but also the spectrum of distribution in kind and chronology surpassing some unknowable threshold (for heaviest volume at expiration).

It’s practical to assume that the PBOC became seriously active around January 7 as that was when the CNY rate penetrated 6.60 for the first and so far last time. But that doesn’t mean there weren’t deployed functions before January 7 or perhaps that there might have been a lot more in the weeks thereafter (especially immediately before the Golden Week and maybe even at its conclusion right up until February 11).

Again, I didn’t expect that it would turn out so nearly exact. The shift in CNY back to “devaluation” again occurred on and around April 11, just a weekend and a day off of three months forward from January 7. That’s not all, as the second “window” of the PBOC maturity transformation may have also just passed. In other words, as I wrote back in March, it was reasonable to suspect not just one singular forward intervention but many that clustered around these important changes. January 7 was only the first; the events of China’s Golden Week and really February 11 at the absolute end of the last liquidation wave suggested even more effort. I suspected that if maturities from the January 7 intervention would be enough to pressure CNY back into its unwelcome drop (really “dollar” again) then whatever happened around February 11 might amplify it that much more. 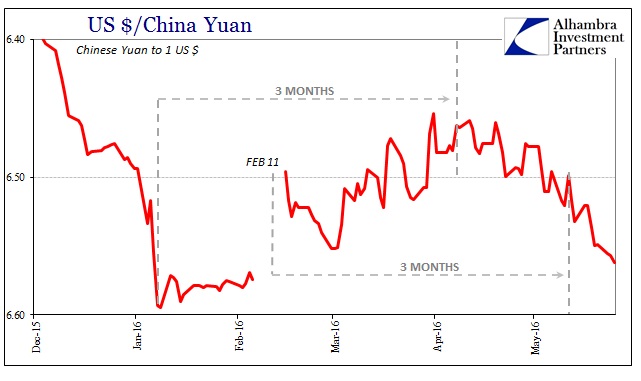 Initial indications do suggest that CNY may be sliding more uncontrollably of late, timed to around May 11. It is too early to make any definitive declarations on the matter, again keeping in mind that we don’t even know what we don’t know, but it all adds up not just with these more immediate indications but also in terms of the same repeating pattern.

Despite all this, especially with CNY dropping to a new low, most asset classes remain somewhat ebullient in the face of what should be growing pressure. Illiquidity, however, is not the only component in liquidation, as this seeming divergence has also been a regular feature of these “waves.” What CNY is describing for us at these regular intervals is simply liquidity conditions related to the eurodollar system and its Asian “dollar” component(s). The true variability starts from there, as there is less indication about exactly how illiquidity translates into the cascading snowball. There are some signs, however.

If there is something truly missing, it is so far CNH or offshore yuan. It was almost the defining characteristic of the PBOC’s helplessness during the prior two episodes; so much attention was paid to “speculators” trading CNH in Hong Kong that it missed these important interconnections. Since mid-February, CNH has been a most placid and conforming market – which can only mean intervention. Recent trading has begun to hint at the end of that “window” as well (subscription required). 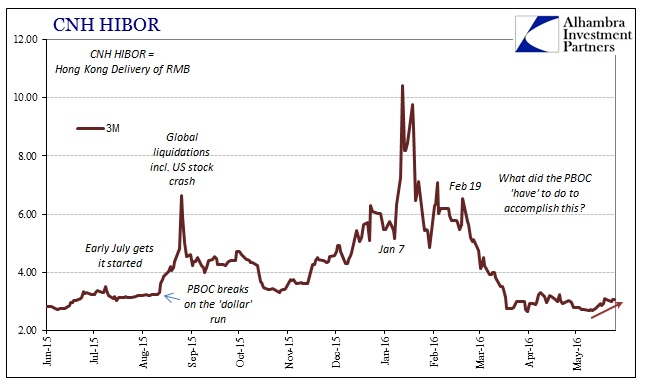 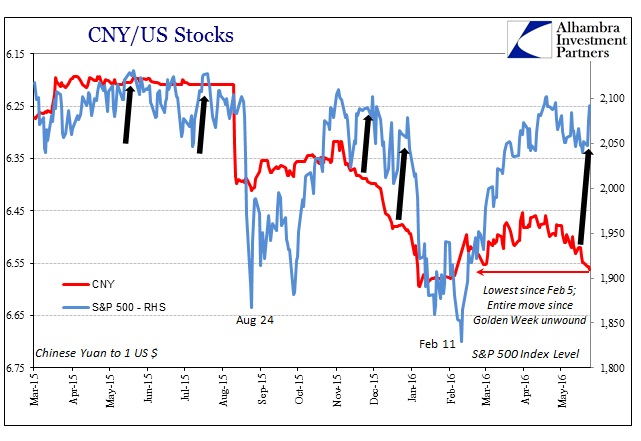