Converting Into The (So Far) Broken Correlation

Converting Into The (So Far) Broken Correlation

The Chinese exchange rate has traded lower for five consecutive days, and aside from essentially no change last Friday would have been eight in a row. That contrasts with the downward pattern that existed ever since the turn in mid-April where only the general direction was down in not so much a straight line. The slope isn’t dramatic, but it does suggest some amplification to the Chinese “dollar” struggle. As I wrote earlier this week, that wouldn’t be a surprise now that we are comfortably more than 3 months past the February 11 end of the liquidation (and likely heaviest PBOC influence). 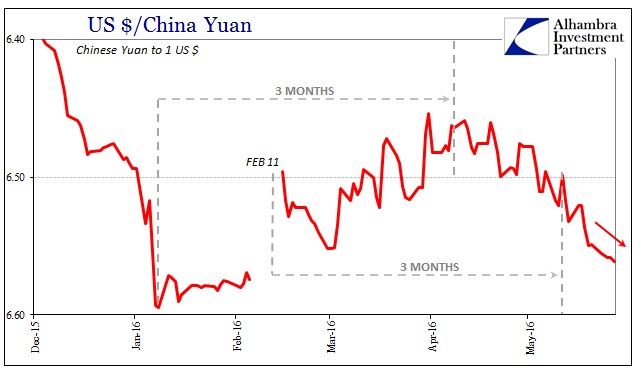 Eurodollar liquidity thus being established, it does leave some open differences that require if not explanation than reasonable conjecture. One of the most striking and visible correlations about “dollar” and CNY was oil prices. Since the end of the liquidations on February 11, however, oil has been rising no matter what in CNY. At first that seemed to be the usual, but when yuan turned down again in April WTI just kept on going and still has. 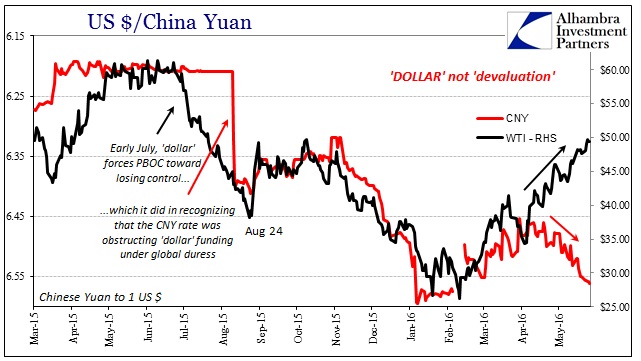 There are a number of possible explanations, including fundamentally-connected financial changes. In other words, all the contango has been wrung out of the futures curve which suggests more balance between supply and demand (of physical oil and/or commodity finance). A steeper futures curve is heavy incentive to pull oil off spot markets and store for future delivery (significantly higher future price than current). As the “dollar” pushed the front end of the oil curve drastically downward, it opened up this process to remove current physical supply. 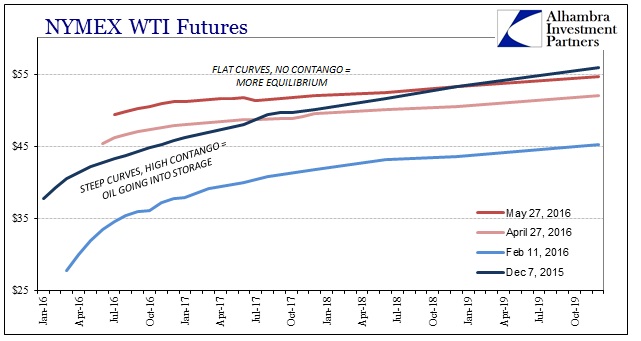 It is no coincidence, then, to find rising oil inventory not long after these liquidations start to really stretch the futures curve into such deep contango (the typical oil curve is usually backwardation, but that hasn’t been the case since the “rising dollar” began its front end work all the way back in 2014). And, as now, when contango is minimized without further liquidation we find oil inventories crowning or even falling slightly. 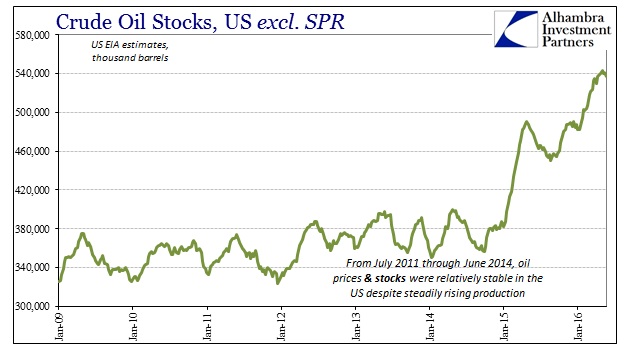 The most recent US EIA estimates show that domestic inventory topped out (for now) at the end of April, but really the inventory build started to slow at the end of March just as contango disappeared into better “dollar” conditions (bought by the Chinese). There has also been the steady drop in domestic production to perhaps favor that more balanced fundamental/financial outlook. 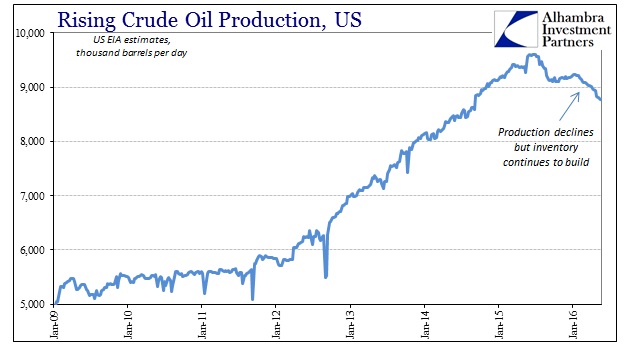 Oil prices might also have been aided by global supply disruptions that seem to have been almost regular occurrences these past few months. There was the massive fire in Alberta that reduced Canadian output, continuing attacks on Nigerian supplies, and the blockaded Libyan port of Marsa el-Hariga. None of these indicate rising oil demand, which is likely reflected in the flat futures curve that is still, despite oil rising from the depths of February 11, entirely under $55.

It is possible the combined nature of all these price-positive supply factors might have been enough to break the stranglehold of CNY – but I doubt it. I think there is another financially fundamental factor that should be considered and maybe given far more consideration in trying to explain oil’s rise these past six weeks or so.

The recent Chinese practice of being repaid in oil rather than “dollars” is the same principle as contango with the added “bonus” of being a reduction in dollar leverage on the front end of the global oil price curve. In other words, the Chinese need not borrow more “dollars” to buy oil, while at the same time removing what seem to be enormous quantities from sale on global markets. It has the effect of monetary strangulation upon their African trade partners, but as I wrote Wednesday none of this is truly “free trade” to begin with; desperate times and all that. 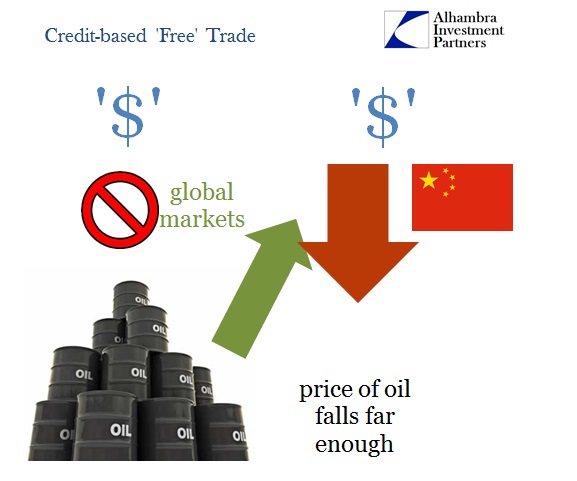 What we don’t know is exactly how “recent” this shifting of commodity placement has been. From what I can tell from what little information is available, this is nothing new in Chinese financial “trade” with Africa but it does appear as if the repayment demands have grown precipitously in 2016.

This year Angola, Nigeria, Iraq, Venezuela and Kurdistan are due to repay a total of between $30 billion and $50 billion with oil, according to Reuters calculations based on publicly disclosed information and details given by participants in ongoing restructuring talks.

That is a lot of financialism being “converted” into Chinese-owned oil, perhaps circumventing entirely the global market. Of course, we don’t really know what the Chinese are doing with it once they take ownership, but again there are hints and suggestions that their actions are very much like heavy contango:

China, the world’s second-biggest crude consumer, may be poised for another increase in imports after the number of supertankers bound for the Asian country’s ports rose to a 16-month high amid signs it’s stockpiling.

There were 83 headed to China, the most since December 2014, according to a ship-tracking snapshot compiled by Bloomberg on Friday. Assuming standard cargo sizes, they would be able to deliver about 166 million barrels.

The chart accompanying that April 25 Bloomberg article does suggest an increase in import volumes for crude in 2016. As usual, some orthodox economists have been quick to point to this Chinese “demand” as some sort of signal that “stimulus” is once again working.

Chinese credit stimulus and a 20pc rise in public spending has set off a fresh mini-cycle of growth that is already sucking in oil imports at a much faster pace than expected.

Barclays estimates that the country will import an average of 8m barrels per day (b/d) this year, a huge jump from 6.7m b/d last year. This is arguably enough to soak up a big chunk of the excess supply currently flooding global markets.

That was written by Ambrose Evans-Pritchard under the unfortunate headline of Soaring Oil Demand In China Rescues OPEC. As usual, the orthodoxy in a desperate rush to confirm their own biases and self-imposed monetary illusions easily misses the point of what China is actually doing to much of OPEC, where the only description that would apply is the opposite of “rescue.” To reiterate:

Repayments are often paid with oil or funds go directly to Chinese construction firms that have built roads, hospitals, houses and railways across the southern African country.

This means, however, dollars don’t end up entering the real economy, increasing costs for ordinary Angolans.

Angola doesn’t get nearly as much attention for OPEC as Saudi Arabia, but Angola surpassed Nigeria last year as Africa’s largest oil producer. The benefit of holding that title as China ramps up imports is again monetary suffocation because Chinese “demand” appears financial rather than “stimulus” windfall.

In the end, however, it may not make much difference because as the OPEC nations are further squeezed under these oil terms, they will only add weight to the ongoing global eurodollar squeeze. It doesn’t ever alleviate or diminish, it is only transferred from one place to the next until it circles back around like some pecuniary boomerang. That could, potentially, just make China’s “dollar shortage” that much worse, leaving them fighting their own currency problem of more straight-line “devaluation.”

It is impossible to know just how much of an effect this would all have on oil prices, but I suspect that there is still far, far more Chinese to it than production cuts and supply disruptions. Last year that meant CNY and WTI in almost lockstep; this year maybe something different (for now) as China tries to “convert” more worthless, undefinable eurodollars to black gold. They still need those eurodollars, though, and it may not matter given enough time for the next run of instability. 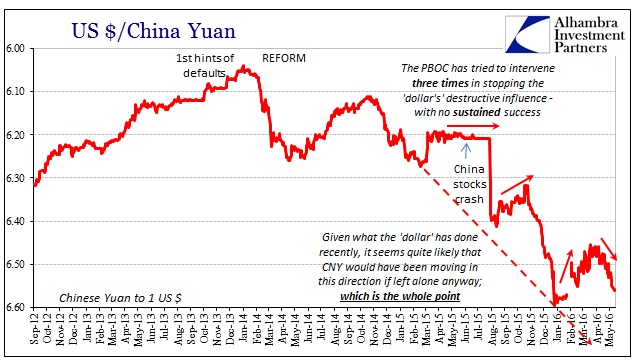