Inventory is an exceedingly simple concept spaced between the most basic economic fundamentals. Because the modern economy operates upon mass production, the flow of goods is not direct. Thus, there are structural differences between demand and supply, with inventory as the pivot in between. If end demand rises it still gets filled even though production cannot respond instantaneously (no matter how much emphasis on just-in-time in economics textbooks). Instead, inventory falls signaling more production is necessary with certain structural lags.

If inventory levels are rising, then that either means demand has fallen off relative to the level of production or production is far greater than the end level of demand. This relationship is constant no matter the absolute point in either supply or demand. In other words, if inventory is rising precipitously and demand is already “strong” and getting “stronger” still, then supply must be really, really strong.

It is, again, an exceedingly simple equation where the one variable is inarguable. In this case, inventory is and has been rising beyond any reasonable boundaries since late 2014. As noted earlier today, despite that economists and the media (redundant) tell us constantly that “demand”, especially consumers driven by the so-called robust jobs market, is especially robust. It has to be given the narrative of “full employment.” Therefore, by simple equation of known inventory and the mainstream qualification of demand, we can only expect production is unbelievably strong. Which it isn’t. 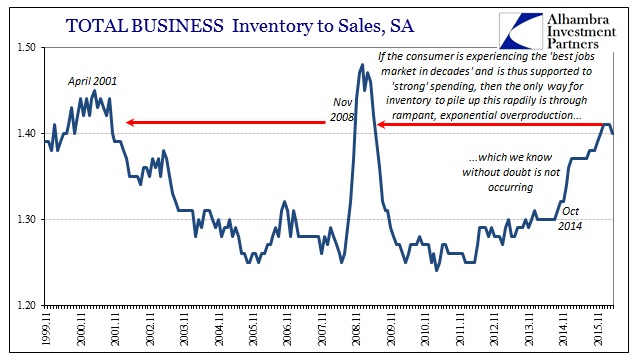 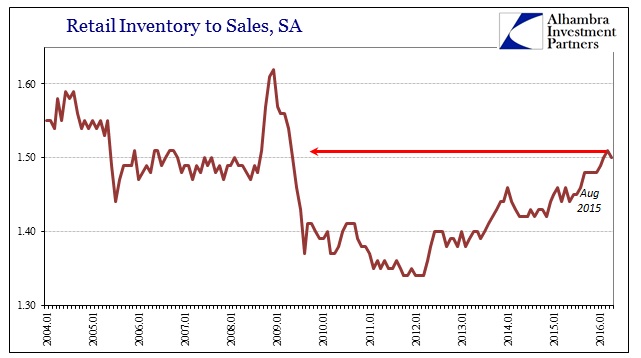 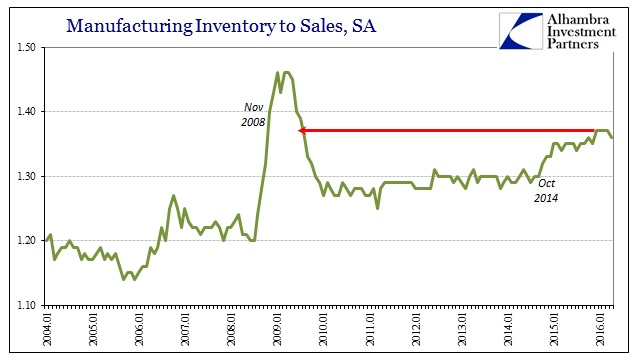 Instead, we know that production both in the US and overseas is the opposite of that, leaving demand as I often describe it – atrocious. There is in this context no way with which to turn contraction in production combined with rising inventory into “strong” consumer spending – or “strong” anything economy related. It is the incontrovertible contradiction to the “full employment” narrative. There cannot be a huge inventory imbalance combined with contracting production that works out as anything other than atrocious “demand” and consumer spending. And, as is clear below, it is everywhere and not just petroleum.

With revisions having been only in the “wrong” direction so far, suggesting strongly that the inventory imbalance is likely somewhat worse than even what we see here, that leaves the further possibility that consumer demand can only be figured even weaker still. Unfortunately for logic and the semantic value of words, I have no doubt that demand will continued to be described as “strong” anyway. At this point, economists have no other choice; full employment can have it no other way no matter how obvious the inequality. 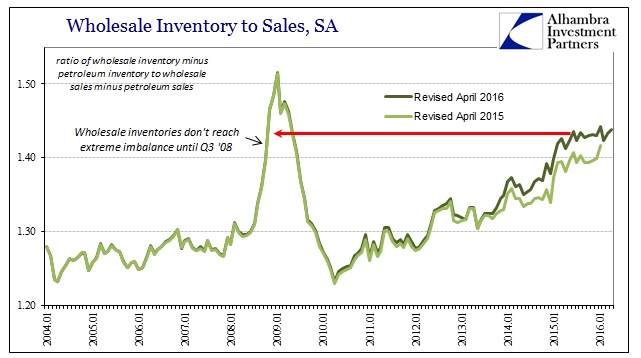 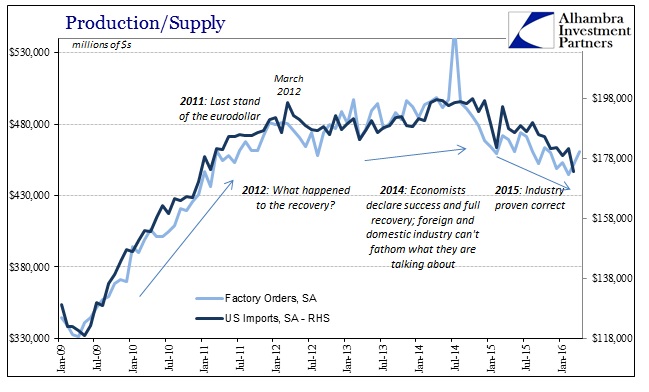