So the FOMC voted against another rate hike yesterday, which in itself deserves no comment. Not even Esther George could muster a dissent as she has done nine of the previous eleven times. Notably the last time Ms. George voted with the all the rest of the committee against the symbolic raising of the irrelevant federal funds rate was the January meeting, coming as it did amidst the storm of “global turmoil” if that suggests anything of June.

There are a few parts of the policy statement that do demand attention, if for no other reason to than to further suggest policymakers live a made up economy. For some reason, the word “transitory” appears yet again, as if a year and nearly another half of it isn’t enough to completely debase its meaning. It is true that oil prices are up from earlier in the year, but are down substantially still from the first time the word made its appearance.

Apart from all this durably “transitory” weakness, the official policy statement makes a demonstrably false declaration that fits the pattern of orthodoxism in this economy. They declare what “should be” rather than refer to what actually is. The chief application of this principle is the religious recitation of “the economy is getting stronger” even when absolutely nothing about it is; that would include, since the start of the year, the labor market statistics.

Contained within the June 2016 policy statement is the following included undoubtedly to lessen the blow from the same statement just before admitting that “job gains have diminished” and “the pace of improvement in the labor market has slowed”:

…the drag from net exports appears to have lessened.

Nowhere can such case be made unless the FOMC is privy to Census Bureau figures that haven’t been constructed yet. Through April, US trade has only continued to contract and at rates on both sides (imports and exports) consistent with grave economic concerns. 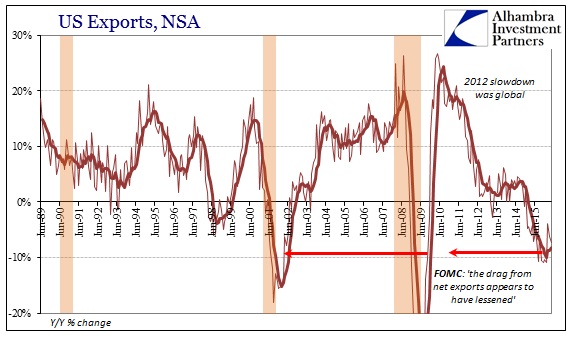 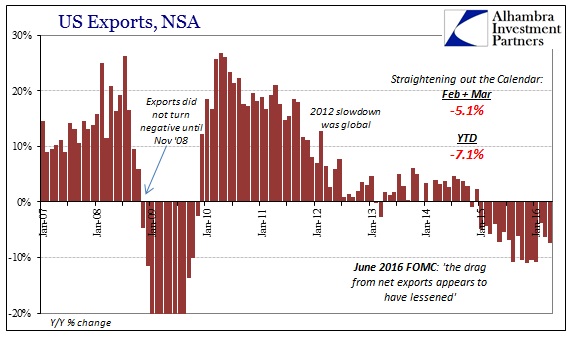 While the 29th day of February “boosted” the export contraction to only -3.8%, the rest of the year has proceeded in steady decline. In April, exports were down 7.4% from April 2015, which was already 4% less than April 2013. So exports across two years are now more than 11% lower and so far sticking with further steady contraction. For the four months of data compiled of 2016, exports are down 7.1% compared to the same four months in 2015 and more than 10% from the first four months of 2014.

The import side is not any better, with imports dropping almost 8% in April after falling 9% in March. Year-to-date, imports are down nearly 6%, suggesting that US “demand” is getting worse. 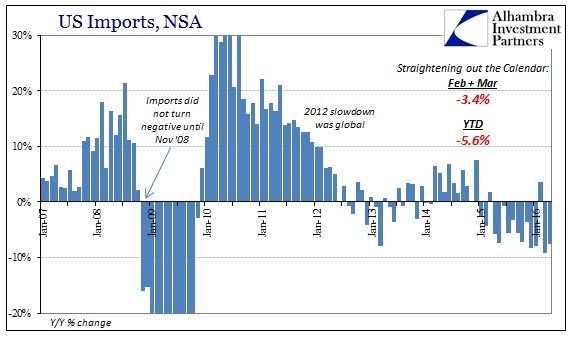 Perhaps that provides a clue as to what the FOMC statement might have really meant. If you read it carefully you will notice it says “net exports” are less of a drag. The only way that could be true is if imports are now contracting closer to the level of exports (second derivatives that are used to calculate GDP). Thus, we could translate the FOMC statement to practically mean that the US economy is getting worse at a rate slightly quicker than its exposure to the global economy, therefore the “net” drag on the US economy is “lessening.” That might be technically correct, though we will have to wait for Q2 GDP to find out, but demonstrably false as to its intended context.

As usual, the Chinese can attest to this divergence, as China’s economy has been wondering what the FOMC has been talking about for years. After falling 27% in March (though rising 16% in February with holidays and calendars on both sides of the Pacific playing a role), US imports from China dropped almost 8% again in April. YTD, US imports from China are down an enormous 7% from 2015. US “demand” for Chinese goods used to expand regularly and consistently by 20%; the entire orientation of the Chinese industrial economy was made for that growth (and financed by eurodollar expansion expecting it to continue uninterrupted). 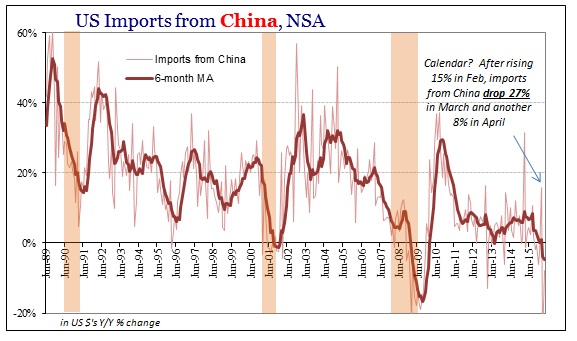 Not even during the dot-com recession have US imports from China been so reduced. The last time the Chinese were hit with contraction similar in scale was early 2009.

Whatever the intended meaning of the “net export” reference, it is either misleading by omission or as usual implying an economy that just doesn’t exist outside of media commentary. The day when people stop paying any attention to the Federal Reserve is the first day of real progress. They have no economic insight (as if anything has changed from 2006) and functional US monetary policy is written in Chinese after being prepared in Tokyo, Hong Kong, and London. Bad habits die hard; meaning, then, that real progress is very likely both exclusively political and, unfortunately, a long way off.