The real nature of liquidity is not what you see today but what we might find when the going gets tough. Though it is an intangible concept (not that that hasn’t kept economists from trying to quantify it), we can reasonably assume that if overall liquidity today appears impaired under relatively benign conditions, it will be significantly worse as malignancy spreads. Like entropy, liquidity reacts only in one direction.

Even if liquidity is atrocious it still does not add up to gross disorder on its own. Liquidation is the combination of illiquidity and determined selling, so if liquidity has been bad for months without triggering global distress then the difference or inflection would be left for some spark – such as Brexit. On its own, Brexit doesn’t amount to any tangible or predictable difference in either the global economy (that was only bad and growing worse anyway) or financially. Instead, the real nature of Brexit is uncertainty and thus higher modeled expected volatility on that count alone.

A system with low systemic capacity that suddenly finds a shot of uncertainty is one that reacts far out of proportion.

From a financial standpoint, the view of global “dollar” liquidity has in many ways rarely been worse. The systemic baseline is atrocious, which suggests why hedging activity in risk markets is so attracted to knowable events. Liquidation is more than illiquidity; it is the combination of that with an uptick in selling. Thus, low liquidity increases the chances of a minor selling episode getting out of hand, careening toward self-reinforcing…

It means for the time being there will be far too much attention on Brexit when the real story is in the other direction on the other side of the world.

True functional liquidity, then, is not just how little any single trade might move prices, but the actual depth of trading capacity that might keep those prices from spiraling into self-reinforcing feedbacks (margin and collateral calls) that only further prevent the return of normalcy.

Unsurprisingly, in the two days since the UK vote was announced the CNY exchange rate has plummeted. In the week or so leading up to the vote, markets had been betting on Brexit’s defeat, and so that unleashed a serious episode of “dollar selling” (meaning “dollar” supply) that only created the appearance of optimism and calm. In that sense, the temporary boost to liquidity wasn’t really liquidity at all; as we have seen since the vote, there is an obvious lack of systemic capacity as last week’s “selling dollars” benignity has just disappeared.

As CNY goes, so goes the rest of the world. As of this morning’s close, CNY was down almost to 6.66, significantly exceeding the prior lows in January. This sharp move is really just the restoration of the prior trend that had only been momentarily reset by the UK “dollar” intrusion. 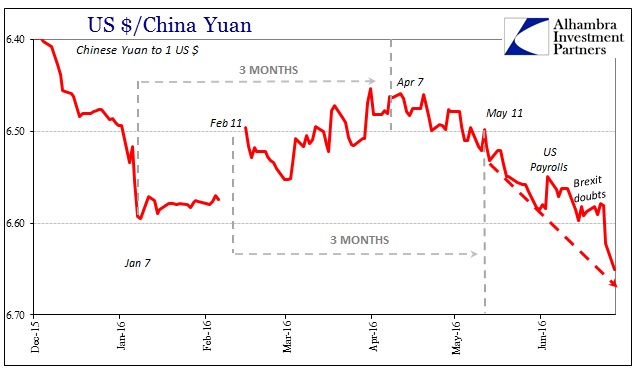 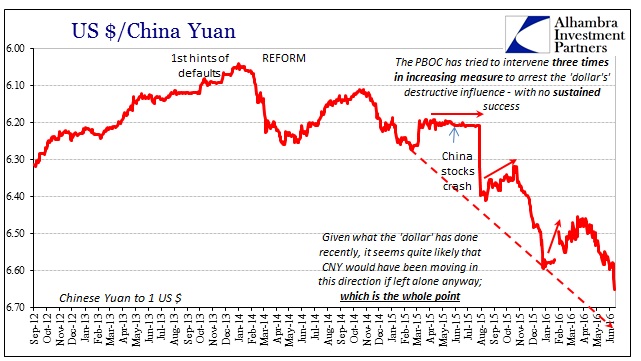 It is impossible to say for sure, but it does suggest that the slippery slope of illiquidity is indeed quite slippery. CNY, JPY, eurodollar futures, GC repo, etc., are all warning signs that it wasn’t Brexit, specifically, but “dollar.” Brexit may just be the spark that delivers the next liquidation wave. It’s too early to make any determination, but the risk of next one in line has certainly risen. 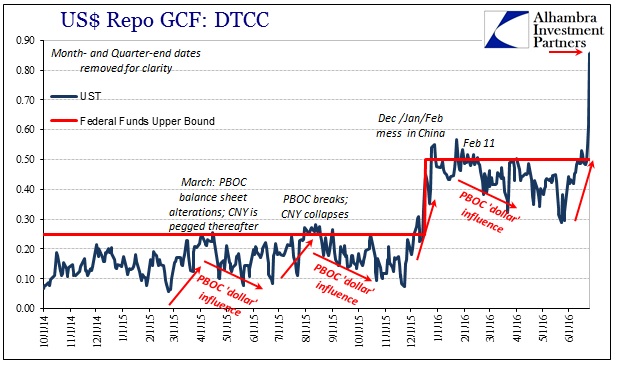