The final revision to Q1 GDP changed very little, at least in its natural format given that there are benchmark revisions coming in less than a month that could significantly alter all of this. Even with “residual seasonality” there is every reason to suspect that the economy is weak even as compared only to the past few years. That seems to be the limits of commentary, which is why the true menace remains obscured. Economists use words like “strong” and occasionally “weak” when their meaning no longer applies as it once did.

PCE growth, for example, was revised to just 2% year-over-year, a rate that is weak in every context. The real problem of it, however, is much more because the path to a healthy economy is not 3% or even 4% PCE growth, it is 8% or perhaps 10% consistently for several years. The world needs to experience a sustained period of well-above trend growth just to make up for the “recession” in 2009 and the continued lost activity thereafter. The longer the economy stays so far below trend, the more likely it never will. And it is in that context that “strong” and even “weak” just don’t work.

More than anything, that is what the unstable GDP of the post-2011 period suggests. Classifying growth in traditional terms is misguided and unhelpful. This doesn’t mean that cyclical considerations have been reprioritized to nothing; far from it. In the end the real danger is not the next recession but what comes after it. In other words, the only meaningful contribution of the GDP figures is that they continue to show that the Great Recession wasn’t a recession.

Economists talk about strong consumers but as usual that twisting of the word is derived mostly from the hopeful interpretation of the employment estimates, not actual spending considerations. In PCE goods spending, consumers have under this “rising dollar” behaved as if in recession. The nominal average growth rate is just 1%, which is similar only to other contractions. 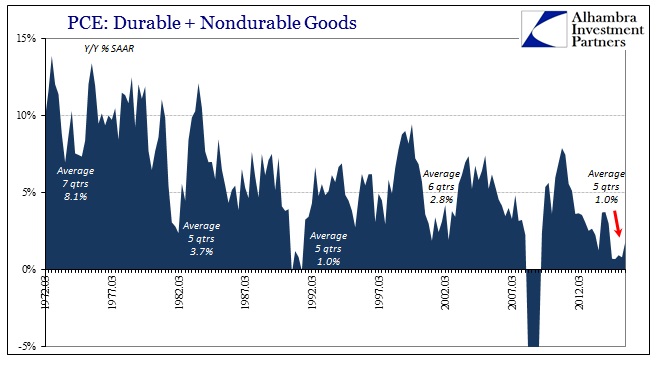 At the same time, non-residential fixed investment has fallen off dramatically. No consumers and no capex usually add up to serious problems under the best of baseline circumstances. So, again, there are cyclical aspects that are relevant to economic analysis. 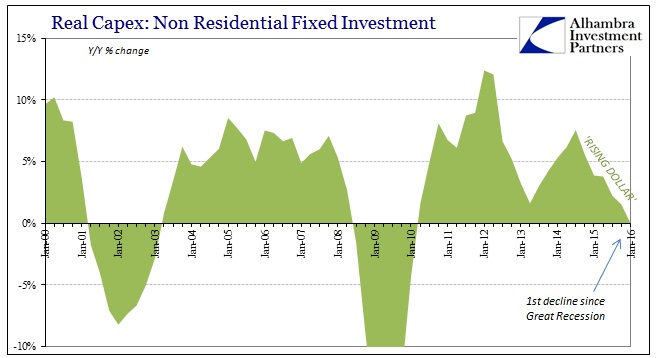 Fixed investment was revised upward so that what was a negative quarter point “contribution” to Q1 GDP is now only -0.06%. That, along with “better” net trade, meaning US demand for foreign goods collapsing relatively faster than foreign demand for US goods, accounts for the whole upward overall revision to 1.1%. It proves yet again that there is far too much emphasis on quarterly changes which in the end are not in any way meaningful.

Labeling the economy “weak”, which would seem far more appropriate, or even recessionary is still distortive. Those concepts apply to the paradigm of normalcy and what we find instead is quite far from it; and only getting farther by the quarter. The economy is both smaller and slower, a combination that doesn’t fit in any of the conventional characterizations. Perhaps it is best just to suggest that this economy is “dangerous.” 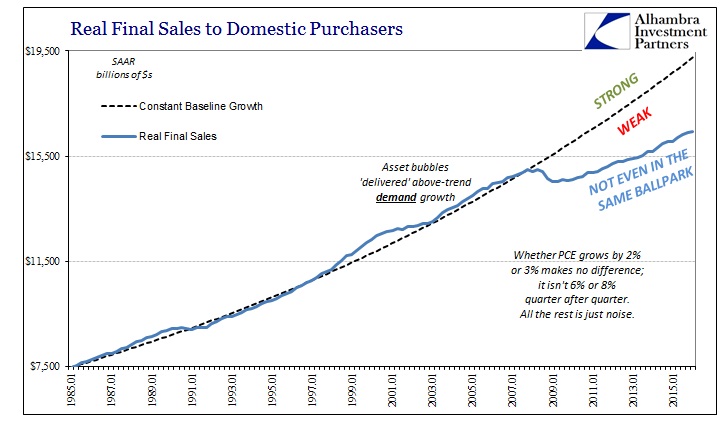 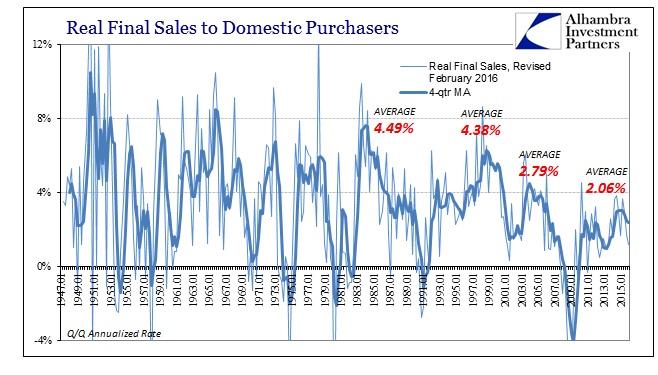 The real recovery can’t happen without a direct and determined effort to reform the global monetary system. That won’t happen so long as economists are allowed to continue operating under conventional assumptions and formats that have not been appropriate in a very long time. Viewing GDP under normal conventions is thus an impediment to recognizing the answers to the global malaise because it leaves this “stagnation” as if it were some unsolvable mystery or unbreakable code. Quarterly growth of 1.1% is no different than 0.8% or even the 0.5% first quantified.

In reality, 1.1% in Q1 2016 is no different than the 3.8% growth in Q2 last year or the 4.5% in the middle of 2014; just as those seemingly “strong” quarters led nowhere positive, despite the coordinated outbreak of assurances otherwise, the current “weak” quarter is not likely to suggest anything sufficiently different in the global and US economic baseline. It is all still secular stagnation, just not for unknown reasons.

And if that is the case and there is a recession in the immediate future, then we have to consider what happens after it ends. Would it be like the Great Recession where the contraction is never materially addressed by its following “recovery”? In other words, the recovery after 2009 wasn’t truly that, it was instead really just the absence of further contraction, an almost zombified state of the economy that shows up in statistics like GDP as unstable quarterly growth. If the Great Recession left the global economy smaller and slower, does the persistence of secular stagnation mean the next recession, of whatever potential depth and duration, leaves us all smaller and slower still?

That is the possibility that should be most concerning and the one that should actually be addressed as a priority; the only priority. It won’t be, of course, because the economy is still being viewed as if it were like its 2005 version, just stripped of its housing “boost.” 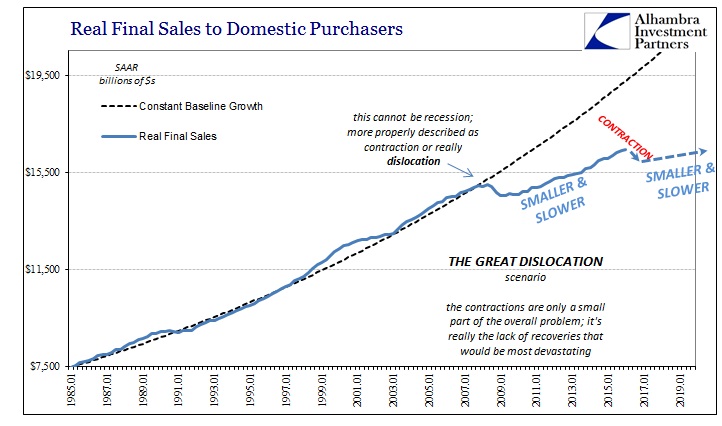