The Income of ‘Full’ Employment

The Income of ‘Full’ Employment

In some contrast to spending or even “demand”, the economic problem is and has always been the lack of income growth. The difference in economy between income and spending is debt. As noted earlier, it was clear that the asset bubbles, based on debt via eurudollar expansion, created a boost in overall “demand” as represented in GDP’s Real Final Sales to Domestic Purchasers. On the other side, income, particularly disposable income, we find that like the labor statistics the weakness or potential dislocation point was much earlier than the Great Recession (or Great Dislocation).

As usual, descriptions of the latest update for Personal Consumption Expenditures (for May 2016) and Personal Income liberally and incorrectly apply the word “strong.” An example from Reuters:

Wednesday’s fairly strong report released by the Commerce Department pointed to an [sic] acceleration in economic growth in the second quarter.

The accounting fails both in relative comparison to prior periods where “strong”, fairly or not, would have been more appropriately applied and further the overall context of spending and income. DPI is about a quarter less than it should have been given a constant baseline tracing back decades. In other words, income growth for a very, very long time was rather consistent in its long run trend – until the start of the 21st century. Unlike spending, income began to underperform during the housing bubble, once again demonstrating the illusory effect of so much additional debt. It was never prosperity or successful economic policy, it was unbridled monetary expansion globally wreaking havoc. 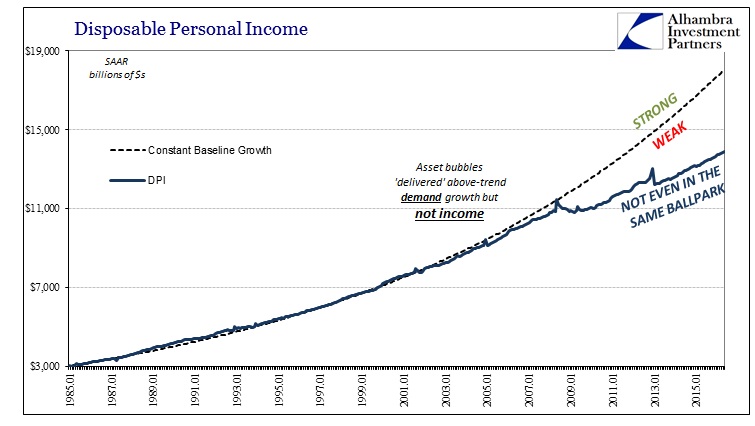 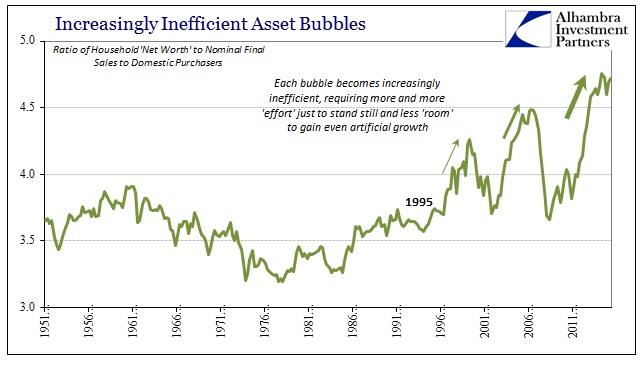 Orthodox economists appeal to the wealth effect as if a legitimate reason for any reaction among asset prices to monetary policy, in particular, when instead it is and has always been income that drives spending (debt supplementation notwithstanding). From the income side, the economy appears even weaker than in spending owing in part to where debt has still been placed – corporate and government bonds; in the consumer space, student and auto loans. Such focus on “demand” components rather than acting as “pump priming” has done very little to boost overall income and the virtuous cycle orthodox economics claims as just that easy.

The economy can never move forward out of this stagnation or permanent dislocation without a serious and positive shift for income growth. In more immediate terms, the economic narrative is distorted by the smaller and slower economy such that what is being touted as full employment actually comes up short in every single facet of it. Compared to other periods where the term has been applied, defined in Fed literature as a “central tendency” of 5.6% to 5.2% for the unemployment rate, the past few years have only proven “smaller and slower.”

Thus, full employment isn’t really that at all, it is only the subset of the economy that is being measured rather than the full economy that actually exists and is forced to react to “smaller and slower.” Placing “full employment” in its proper context removes all the mystery over continued weakness, especially how “strong” consumer spending and income never happens to turn out that way. It makes no sense to claim that with three-quarters of the economy at full employment the future is only bright, but that is what economists and especially policymakers are really saying.

By income and even the mainstream labor statistics, there is no getting around smaller and slower. The real problem is not just coming to terms with this past, rather it is deciphering what it might mean in the immediate future as the now “normal” stagnation potentially turns over into something else, possibly even another contraction (not recession). 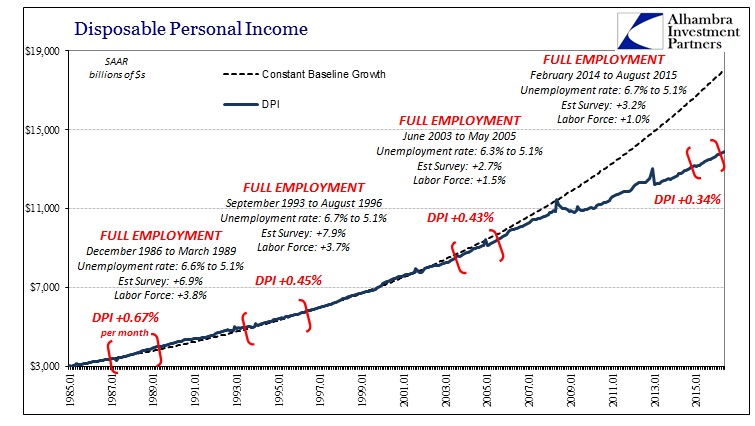