As an outsider, it is difficult to gain the pulse of Japanese politics. Viewing it all only from an economic or financial perspective is immediately too narrow. There is far more than just Abenomics at stake, though Prime Minister Abe used the crutch of Abenomics’ failure so far as somehow a benefit. There are other factors, perhaps more important factors, to consider, but on the economic front it doesn’t appear as though the opposition had much to offer other than to point out the obvious. The Prime Minister scored voter points by at least being consistent.

Turnout was quite low, but still Abe’s party was able to manage 56 of the 121 contested seats. With coalition partners taking 21 more, they upper house bloc fell only one seat short of the supermajority. Going back to Abe’s ascension in 2012, amending the Japanese constitution has been a priority but one that requires as a first step supermajorities in each house. That’s why it’s hard to distill Abenomics as purely an economic policy.

It’s further complicated by the LDP’s opposition, parties that tend to be in many cases extreme socialist and even communist. By that measure, there are no answers to Japan’s economic problems since, to be overly simplistic, voting is a choice between some brand of (more) naked, overt socialism and the more hidden variety of central bank “stimulus.”

Some voters who backed Abe’s LDP also said the economy’s health was their biggest concern.

“Especially since I see economic growth as the priority, I have little hope for the opposition parties,” said Yoshihiko Takeda, a 36-year-old IT company employee.

Abe had cast the election as a referendum on “Abenomics”. With signs the strategy is failing, the government plans to compile a post-election stimulus package that could exceed 10 trillion yen ($99 billion).

It seems that markets (really “markets”) are extrapolating from the electoral victory more heavy “stimulus” – and once again without any accounting for all the past “stimulus” and why and more importantly how new introductions of it will or even can be any different from them. That may be why the reaction in JPY is really quite muted. For all the seeming euphoria elsewhere, today’s trading only reverses yen back to where it was last Tuesday. In comparison, it’s significantly less than the NIRP announcement. 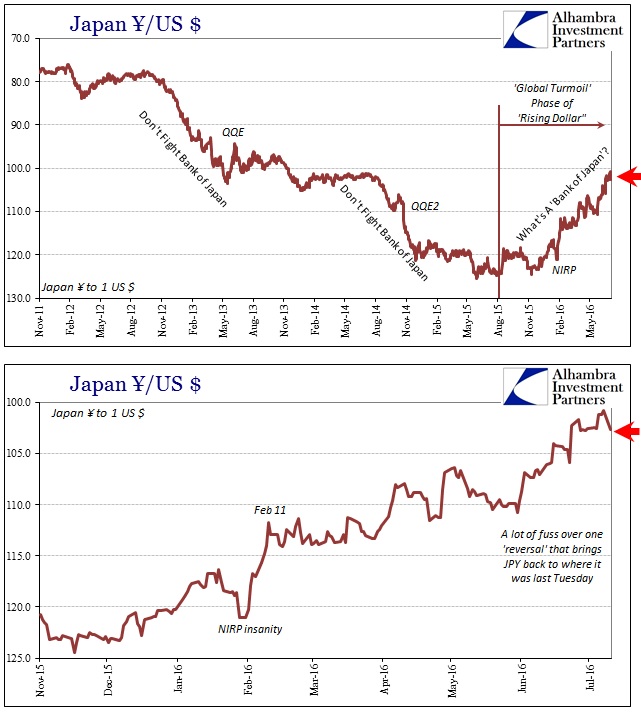 For now, the “market” is only speculating since Abe will not meet with his cabinet until tomorrow to discuss economic measures, meaning just how much the government will further waste doing what it has already done for more than a quarter century. Later in the month, the Bank of Japan will meet and it is widely expected, as it was even before the election, to announce also doing more of the same that for three years (in QQE) has achieved none of its goals – primarily “inflation” that was supposed to have been a sustained 2% by April 2015. Japan’s CPI is now negative again as if QQE never existed. 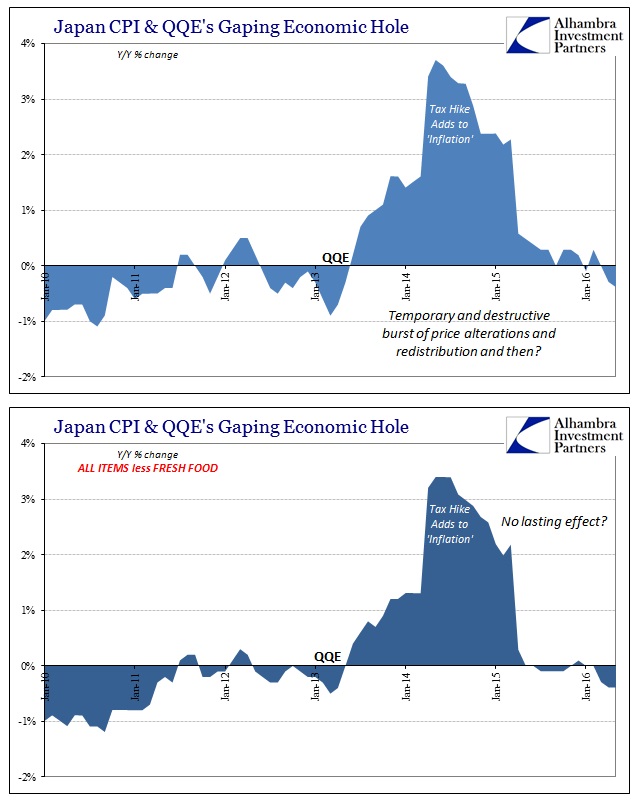 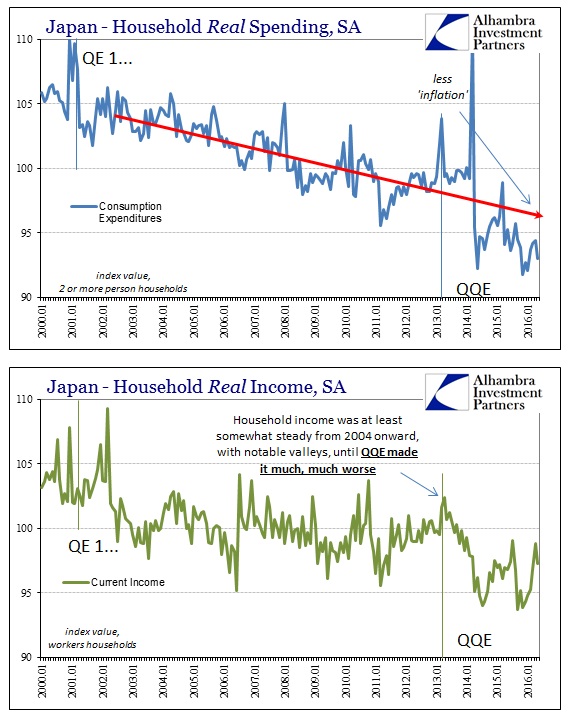 We are back once more, at least for today and however much longer this sentiment can linger, trading on magic number theory. This is the far-too-prevalent idea, hope really, that the missing ingredient is the just right amount of “stimulus.” Monetary and fiscal policies haven’t failed in this fantasy, they have only fallen just a little short to this point. Like medieval alchemy, once policymakers dabble the “perfect” amount of monetary tin into the boiling mix of fiscal copper the magical golden economy is expected to pour out into the Hollywood ending.

Whatever it is, it isn’t scientific in the slightest; and it may just be commentary. After all, JPY and Japanese stocks have been practically running in one direction for an extended period, having gone quite far in that move. Nothing ever moves in a straight line, so reversals aren’t unsurprising or even uncommon. Instead, the difference today might simply be that the mainstream is reading its own (orthodox) biases into the action. The trend in JPY and the Nikkei since November suggests that faith in magic number theory has ebbed and there isn’t much other than that bias to suggest it has been revived.

It seems quite possible that today’s trading will amount to nothing more than what it has in the past, especially under the “rising dollar.” The promise of “stimulus” is far, far more powerful, particularly when fresh and new, than it is in actual operation. Emotion fades, leaving reality as a stark wake up. Again, it’s difficult to grasp the full range of Japanese politics, but even this election doesn’t seem to be all that hopeful and optimistic. The problem with magic number theory and the commentary that supports it is that it offers its victims a false narrative to keep doing nothing but more of the same as if there are no other realistic options.